Intravesical instillation of Bacillus Calmette -Guerin (BCG) is widely used as immunotherapy for the treatment of non-muscle invasive transitional cell carcinoma (TCC) of the urinary bladder. One of the complications of this therapy, is granulomatous prostatitis (Gran P). This is usually asymptomatic. We describe a patient treated with intravesical BCG who developed symptomatic Gran P.

A 51-year-old male, a known hypertensive and smoker, presented with a history of microscopic hematuria for 3 years. At the age of 8, he had undergone a repair of perforation of the urinary bladder secondary to a road traffic accident. Digital rectal examination (DRE) revealed a moderately enlarged soft prostate overlying mucosa was mobile, the central sulcus was not obliterated and there was no nodularity. Investigations revealed a prostate specific antigen (PSA) of 0.39 ngfml , and a serum creatinine of 1.2 mgfdl. A trans-rectal ultmsound (TRUS) showed the volume of prostate to be 24 gms with no hypoechoeic areas. An intravenous urography was suggestive of a filling defect in the urinary bladder. A cystoscopic examination revealed a 2.5cm cauliflower like broad-based growth at roof of the bladder, around 3-4 cm from bladder neck. The patient underwent transurethral resection of bladder tumor (TUR-BT). The histopathology showed poorly differentiated TCC of the urinary bladder with no evidence of muscle invasion (pTl G3 ). A CT-scan showed anterior vesical wall thickening but no locoregional or distant metastases.
In view of the poorly differentiated nature of the resected lesion, the patient received six doses of intravesical BCG immuno-therapy. One mg of Oncotice strain of BCG was administered and retained in the bladder for 2 hours. One week following the sixth instillation, the patient presented with painful hematuria, suprapubic tenderness and severe dysuria. A DRE showed an enlarged , tender, nodular left lobe of the prostate. The patient was afebrile. Investigations revealed a total leucocyte count (TLC) of 9,200/ui , ESR 55 mm, serum creatinine 1.6 mg/dl, and urinalysis revealed> 20 RBCs/HPF and 5 WBCs/HPF.
A TRUS was performed which showed multiple areas of calcification and a peripheral hypoechoeic nodule in the left lobe of the prostate (Figure 1). 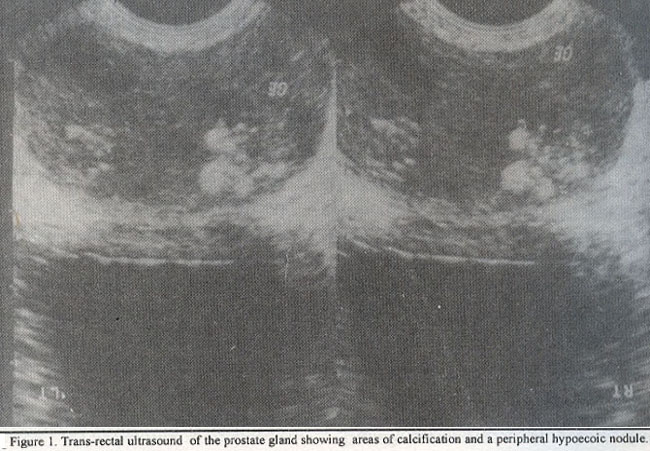 The patient was catheterized and started on intravenous antibiotics and anticholinergic medication. A TRUS- guided biopsy and aspiration showed eosinophiis and histiocytes along with a collection of multinucleated giant cells forming langerhan’s type mixed cells, suggestive of necrotizing granulomatous Prostatitis (Figure 2). 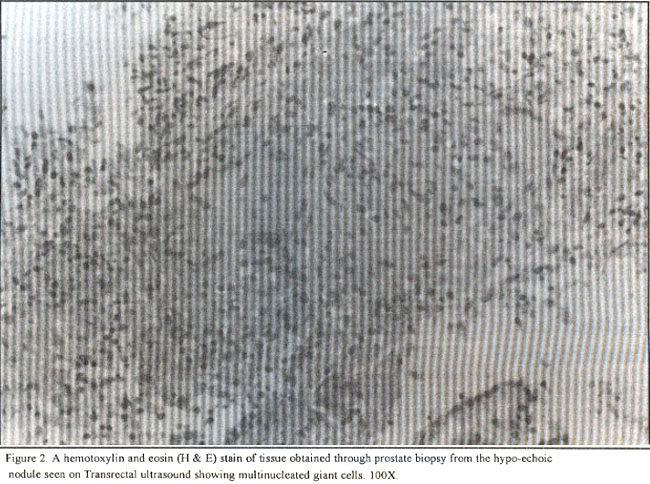 Patient was started on Jsoniazid 300mg/day and Rifampicin 600mg/day.
The supra-pubic tenderness and severe urethral pain continued despite the antituberculous therapy for 6 weeks. A repeat cystoscopy showed bladder erythema with normal bladder capacity . A bladder biopsy showed fibrosis and smooth muscle tissue with mild non-specific inflammation.
Isoniazid was stopped after 6 weeks because of altered vision and numbness in the fingers. The symptoms improved following commencement of Gabapentine,Tryptanol and Diclofenac. The symptoms of prostatitis also disappeared after 3 months of treatment with Rifampicin. A check cystoscopy three months later did not show any erythema or evidence of prostatitis. The patient remains symptom free six months after completion of treatment.

Treatment options for poorly differentiated non-invasive TCC bladder are a matter of ongoing trials. TUR­BT alone is considered to be inadequate as the recurrence rate is reported to be between 70% and 80% and the progression rate ranging from 29% to 50%1. Given the 40% reduction in tumor recurrence rates with the use of BCG in the well-to-moderately differentiated pTl tumors, it’s role in pTIG3 tumor is widely advocated and practiced2. Adverse effects following intravesical BCG therapy are related to strain virulence, allergic reactions, or to nosocomial urinary tract infections. The effects may be BCG-specific or non­specific in origin3. Most common side effects are self-limiting local reactions of urinary frequency, hematuria and bladder irritation reflecting topical immune stimulation. In addition Gran P, fever and cystitis have been reported to be some of the most frequent side effect of intravesical BCG therapy4-6. Mukamel et al6 highlighted the difficulty in differentiating Gran P from Carcinoma of the prostate (Ca P) on digital rectal examination or even on TRUS. PSA leves is also not useful in diagnosis. Ca P PSA may be elevated after intravesical instillation of BCG and normal in patients with Ca p7.
When BCG is administered intra-dermally for prophylaxis of T.B., disseminated granulomatous lesions occur in less than I per million individuals8 The frequency of Gran P in men treated with intravesical BCG varies from 1.3% to 41%5 and has been reported to be as high as 75%9, In one study reviewing 32 patients the mean time between therapy and diagnosis of Gran P was 11.5 months5
A tentative diagnosis of Gran P is usually entertained on the basis of symptomatology, physical findings and TRUS. However, it requires histopathology for confirmation10. The symptoms are those of nonspecific prostatitis, few develop a palpable lesion in the prostate on DRE. Imaging findings are non-specific. TRUS is the most frequently used imaging modality and the predominant finding is a hypoechoic peripheral nodule, Some patients may have focal asymmetric flow to the lesion on color doppler ultrasound9,11, On MRI, the lesion appears as a focal low intensity signal12.

The frequency of Gran P after intravesical BCG is very variable, It can become severely symptomatic and cause distressing symptoms. Antituberculous therapy is required in symptomatic patients.