The management of patients with residual masses following chemotherapy for advanced seminoma remains a difficult problem with no clear guidelines. While most patients with advanced seminoma achieve a complete or partial response with cisplatin based chemotherapy1, a significant number will reveal a residual mass on follow up CT scan or MR imaging2,3. Management options for post chemotherapy residual mass in a case of seminoma include close observation, radiation therapy and excisional surgery. While 80 to 85% of residual masses represent either fibrosis or necrotic tissue needing no further therapy, 10 to 15% may contain viable tumor which, if not recognized and effectively treated, may be lethal. A case of a stage II seminoma with post chemotherapy residual mass is presented and contemporary literature on this topic is reviewed. 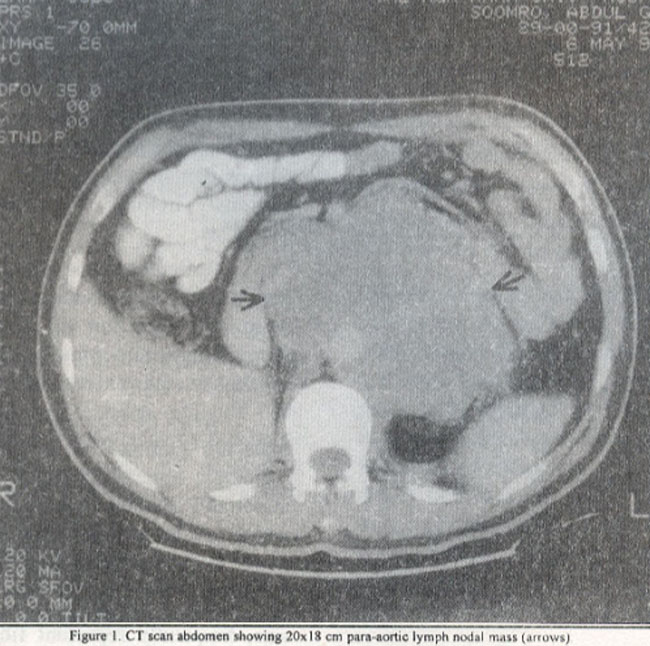 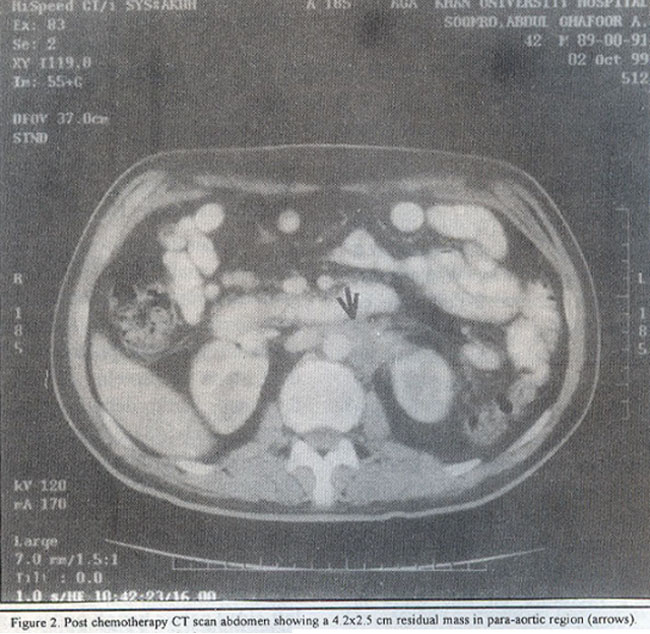 The key question in post-chemotherapy residual masses in patients with advanced seminoma is whether such masses contain viable tumor or not? This information is obviously helpful to dictate further therapy and for prognosis.
Testicular tumor markers are usually of little help as only a small number of patients with seminorna have pre­treatment elevation in these markers. Hence, post chemotherapy tumor markers survaillance is not reliable for residual or recurrent disease in such patients.
Some of the contemporary studies addressing this issue are summarized in the Table4-7. 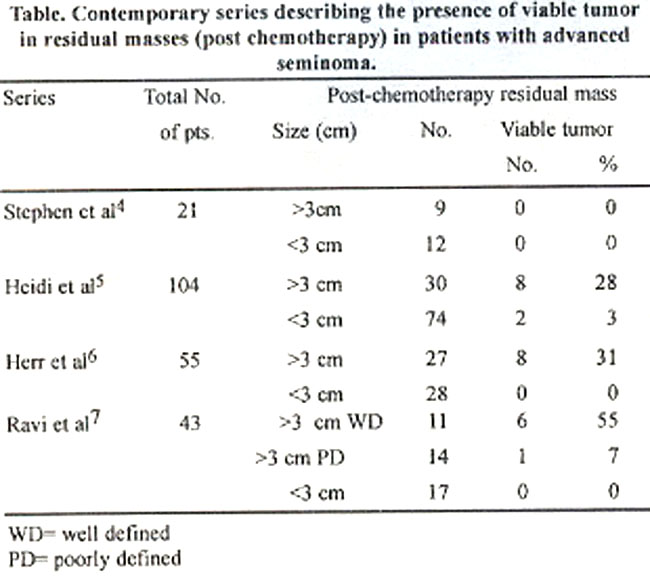 The size and the radiologic appearance of the residual mass seem to be important. Studies have, shown that well-defined masses, which are more than 3 cm in size, may harbor residual tumor in 28 to 55% of cases5-9. Such masses usually tend to be distinct from the surrounding structures. In contrast, poorly defined masses, especially those less than 3 cm in size, frequently represent fibrosis. These masses usually have obliterated radiologic planes and merge with great vessels, the psoas muscles and other retroperitoneal structures. Attempts at surgical excision of such masses representing fibrosis are usually unsuccessful.
Additional therapy for advanced seminoma may be of limited value in patients not showing complete response to adequate chemotherapy10-13. The options include observation, excisional surgery, radiation therapy, and high dose intensive salvage chemotherapy14. The overall disease free survival may not be significantly different between those patients who are observed versus those who receive adjuvant treatment4,10-13. Herr et al6 reviewed the contemporary literature on outcome of additional treatment strategies in patients with post chemotherapy residual masses. They found treatment failure rates of 12% with additional surgery, 16% with adjuvant radiation therapy, and 14% in those who were only observed. They however, mention the possible bias of more advanced disease in patients needing to undergo surgery.
Patients with residual, well defmed masses of less than 3 cm in size or poorly defined masses of more than 3 cm in size, may best be served by surveillance, as most such masses would represent fibrosis. Adjuvant treatment in such cases is reserved for progressive disease. Surgical excision is usually unsuccessful and disease recurrence is best managed by either high dose intensive salvage chemotherapy14 or radiation therapy. Conversely, well-defined masses, more than 3 cm in size are best managed by excisional surgery. Alternatively, radiation therapy may be employed.
Our case exemplifies the importance of adjuvant low-dose radiation therapy to para aortic and ipsilateral pelvic group of lymph nodes in clinical stage I seminoma
because of the risk of occult metastasis. In addition, radiation therapy is useful in managing post chemotherapy residual mass in patients with testicular seminoma.