Diabetes Mellitus: the Role of the Laboratory- an Update

Diabetes mellitus has been known to mankind since ancient times .The Egyptian Papyrus described a disorder in which “honeyed urine” was passed - The first clear account of diabetes mellitus was written by the Roman, Areteaus1 A.D.81-138 who described it as a “mysterious affliction” leading to a “melting down of flesh and limbs into the urine  Life is short, disgusting and painful thirst unquenchable and death inevitable.”
The discovery of insulin in 1921 was one the great achievements of 20th century medicine, it became available for clinical use 2 years later2.
Since the advent of insulin and intravenous fluid replacement therapy, the morbidity and mortality from coma in patients with diabetes mellitus (DM) has been significantly reduced . However there is still a very high incidence of chronic complications in DM. This disorder is one of the commonest cause of blindness . Diabetic nephropathy is a major clinical problem and renal failure is reported to be the cause of death in over 20% of type 1 diabetics3.
A well equipped and well run laboratory is a great benefit for the physcian as regards Diabetes Mellitus in the following areas:
1.     Diagnosis of DM.
2.     Glycaemic control.
3.     Detecting long-term complications of DM.
4.     Diabetic comas.
1.     Diagnosis of Diabetes Mellitus Is Diabetes present?
If patient presents with:
a.     Clinical symptoms suggestive of D.M e.g. (polyuria, polydipsia ,weight loss)
b.     Glycosuria on routine urine testing.
c.     A strong family history.
d.     A suggestive obstetric history.
e.     Other disorders associated with diabetes mellitus , e.g. retinopathy, peripheral vascular disease or peripheral neuropathy. Then it is obligatory to measure fasting plasma glucose.
Further action should be taken after assessing the patient in the context of the table given below4,5. 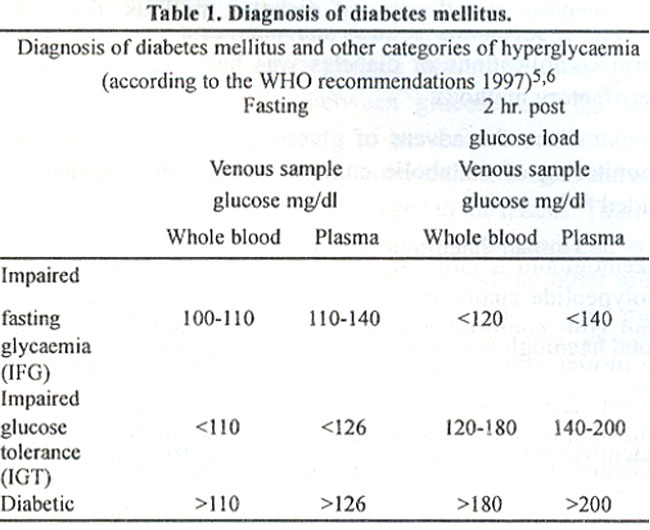 Ideally a patient should be assessed by both, a fasting sample and 2-hour value. If this is not done then it must be accepted that that a certain number of people will be missed6,7.
An additional new category Impaired Fasting Glycaemia( IFG) has been added, although its range is quite narrow it does highlight that some subjects have non-diabetic fasting values which are above the absolutely normal so they may need to be monitored, but the full significance of this group needs further evaluation.
If subsequently the patient falls into the Impaired The patient should have been on a normal diet for at least the last three days.
This especially means a normal carbohydrate intake. During the test the patient should be resting and should not be smoked.
•    Any drugs the patient is using have to be noted as certain drugs like steroids, diuretics, oral contraceptives may be important.
There is no justification for taking half-hourly samples for two hours. Diagnosis may be made on the basis of fasting and 2 hour blood sample, with one hour sample taken to provide additional information. There is also no justification for proceeding with the glucose tolerance test when the fasting blood glucose is raised. Measurement of glycosylated protein is not included in the diagnostic criteria7,8.
The procedure for OGTT
a.   The patient fasts overnight (at least 10 hours). Water is allowed.
b.   A venous sample is taken for plasma glucose and a urine sample is collected by the double void technique.
c.   A solution containing an equivalent of 75g of glucose in 300ml. (N.B. This solution should be drunk slowly, the solution should not be too concentrated as excessive hyperosmolality may lead to vomiting and even without vomiting to poor absorption).
d.  The patient should sit quietly and not smoke.
e.  Further blood and urine samples are taken at 2hours after the ingestion of glucose.
The interpretation of the oral glucose tolerance test is shown in Table 2. 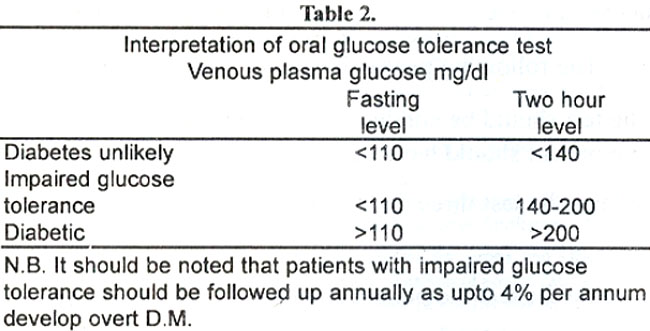 2.  Laboratory aspects of Diabetic Control Blood Glucose
A poor glycaemic control is the major contributor to the development of complications4,5. There are various methods of monitoring but glucose measurement in blood and for urine is most widely used. Blood glucose

measurement although being indispensable for the management of DM , it can have its drawbacks and limitations and these should be clearly understood.
Many methods are available for the measurement of blood glucose.When noting the result certain considerations must be looked into i.e., source (capillary or venous), plasma (14% higher) or whole blood, collection made in a suitable preservative e.g. sodium fluoride (inhibits glycolysis).
In Type I D.M.
These patients can present monitoring problems; their glucose can be highly variable. In addition fasting and random samples sometimes give no indication of the glycaemic fluctuations at home or at work.
In these patients a blood glucose series over a 24hr period during a normal day gives the most information. This may be done while the patient is at home using finger prick capillary blood glucose with reagent strips and a reflectance meter provided the meter has been calibrated and the patient is taught the correct procedure. This can only be done when a liaison is established between a laboratory and the patient.
Alternatively, it can be performed when the patient is in hospital but reasonablely active. In these patients the blood glucose measurement is an indispensable tool in spot checks for hypoglycaemia and hyperglycaemia.
In Type II D.M.
In these subjects the fasting blood glucose fairly accurately represents the mean blood glucose concentration for theprevious 24 hrs. Post-prandial glucose values in these patients also gives a good indication of the glycaemic control and whether ‘or not their treatment is appropriate.
Urine Glucose Testing
Urinary testing for glucose is still unfortunately, a popular test both in type! and type II DM. The major methods for the detection of urinary glucose in routine
1.    Clinitest tablets- containing Benedict’s reagent (detect not only glucose but all reducing agents - false positive. Admittedly these are no longer available. 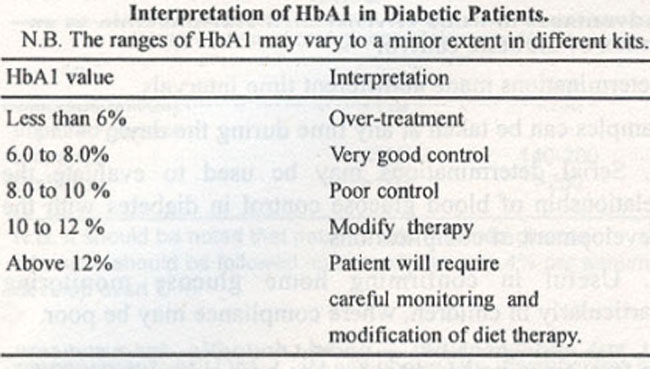