Introduction: There has been a rapid growth in the elderly population and atrial fibrillation (AF) is the most common sustained cardiac arrhythmia among older patients. There is considerable diversity in the management of AF and different treatment regimens have been proposed. These treatments arc influenced by multiple factors. However there is no infi3rmation available on the management of AF in very elderly patients. Most evidence is based upon research in younger people which cannot be extrapolated to older patients.
Niethod: The study was a prospective assessment of patients over 77 years admitted to a district general hospital. New onset AF was defined as AF of less than 3 months duration and chronic AF was defined as AF for more than 3 months. The electrocardiograms of all patients were reviewed following admission and patients were included provided they had AF on admission or during their hospital stay.
Results: Over the six months 783 patients were admitted and of those 153 patients had AF (20%). The mean age was 85.2 years and in 33% of patients AF was the primary cause for admission. New onset AF was noted in 35% of patients and 65% had chronic AF. Intermittent AF was noted in 10% and no patient met the criteria for lone AF. Most patients presented with multiple medical problems averaging nearly five pathologies per patient. Though 41% of patient received thromboprophylaxis, most had inappropriate dosage thus highlighting the problems surrounding less rigid patient selection or inadequate monitoring. Twentysix percent of patients died during their hospital stay but no deaths were recorded in patients who reverted to sinus rhythm.
Conclusion: Elderly patients with AF are a diverse group with limited treatment options due to delayed hospital admission and multiple pathology. Chemical cardioversion is safe in the short term and those who cardiovert have better prognosis. Awareness is required for adequate dosage and monitoring of antithrombotic medications (JPMA 52:566; 2002).

Over the past four decades there has been a rapid growth in the elderly population in most developed countries and similar increase in older population is envisaged in many developing countries.
Atrial fibrillation (AF) is the most common sustained cardiac arrhythmia among older people. The incidence varies from 2% in the general population to over 20% in hospitalised elderly patients1,2.
There is considerable diversity in the management of A.F and different treatment regimens have been proposed3-5. The treatment depends upon multiple factors including duration, type of A.F and associated medical conditions. Presence of multiple pathology, drug interactions, mobility disorders and frail status, makes older patients a particularly challenging group. However these factors are responsible for their exclusion from clinical research6. No information is available on the management ofAF in very elderly patients. Most evidence is based upon research in younger people which cannot be extrapolated to the older patients7,8.

The study was a prospective assessment of patients over 77 years admitted to two acute elderly care wards in a district general hospital. The department had an age related admission policy and all patients were admitted via accident and emergency department.
New onset A.F. was defined as AF of less than 3 months duration and Chronic AF was defined as AF for more than 3 months.
Over a 6 month period the electrocardiograms of all patients were reviewed following admission and patients were included provided they had A.F. on admission or during their hospital stay.
The information collected included the type of AF, duration, aetiology and mode of presentation. Other data included associated medical pathologies, medications, previous treatments and investigations. The records were reviewed on discharge and the information on length of stay and the outcome were recorded. Those readmitted within six months were excluded the second time.

Over the six months 783 patients were admitted to the elderly care wards and of these 153 had AF (20%). Of the 153 patients 56 (37%) were male and 97 (63%) female. All patients were admitted via accident and emergency department. The mean age was 85.2 years (range 77 - 98 years).
Further analysis of the 153 patients with AF was conducted. Majority of them (54%) presented with non-cardiac symptoms. In 33% of patients symptoms secondary to A.F were the primary cause for admission and 13% had a cardiovascular pathology not directly related to AF. Only 2.6% of patients presented with palpitations. Most patients had multiple medical problems averaging nearly 5 pathologies per patient (Table 1). 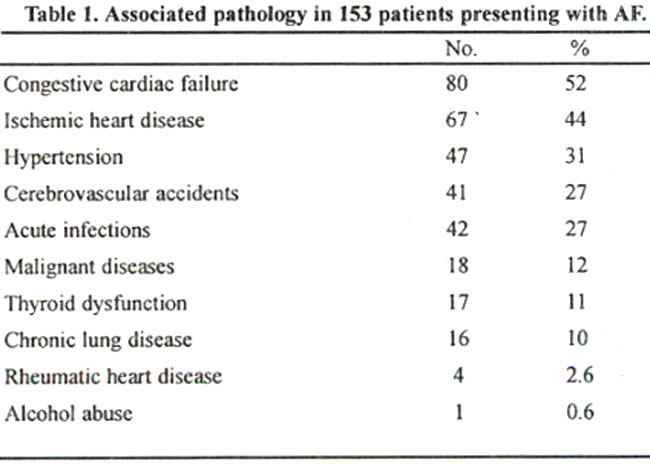 On admission 45 patients were on aspirin. In these group aspirin was prescribed to 27 patients for A.F but only 4 were on an adequate dose i.e. 300mg per day, shown to be effective in clinical trials9. Warfarin was prescribed to 13 patients with A.F and for one patient with cerebrovascular disease. However 50% of these patients had International Normalised Ratio (INR) outside the recommended therapeutic range of2-3,10. During the study 40 patients died (26%). No deaths were recorded in patients who reverted to sinus rhythm.
New onset AF was noted in 53 patients (35%) and of this cohort 25 presented to hospital within seventy-six hours of the initiation of symptoms.Twentyeight patients presented between seventy-six hours to three months. Chronic AF was recorded in 100 patients (65%) and of those 86 had chronic persistent A.F. Two patients had acute intermittent AF and 14 had chronic intermittent AF. No patient met the criteria for lone A.F.11. The key differences between the new onset AF and chronic AF have been included in Table 3. 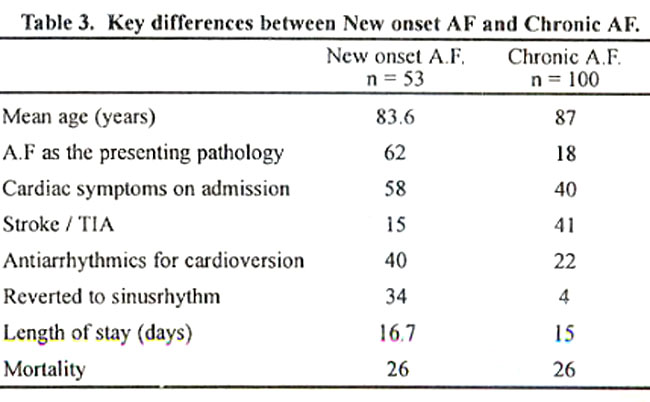 New Onset Atrial Fibrillation (n=53) Mean age for this cohort was 83.6 years.Only 25 patients (47%) were admitted within 72 hours of the onset of A.F. In over two third of the patients a cardiovascular pathology was the primary cause for admission. In 33 patients AF was the main reason for hospitalisation. Myocardial infarction was diagnosed in 3 patients and 4 presented with angina. Stroke, transient ischemic attacks or thromboembolism were noted in 8 patients (15%). Only two patients in this group had intermittent AF.
Treatment and outcome of patients with new onset A.F. is shown in Table 2. 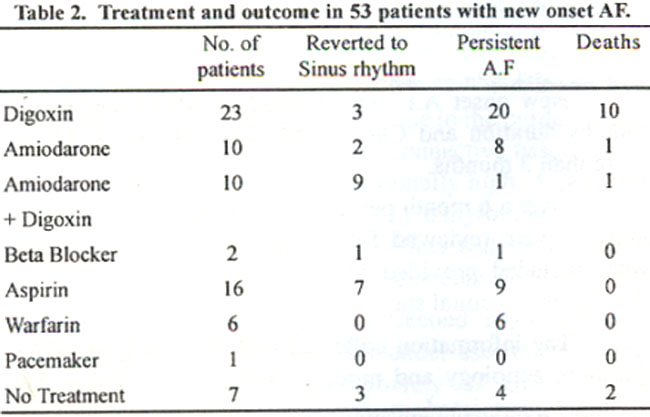 In total 22 patients (40%) had medications with potential for cardioversion and no adverse effects were recorded for these drugs. Nine out of ten patients prescribed a combination of amiodarone and digoxin reverted to sinus rhythm and the only mortality was recorded in the patient who failed to cardiovert.
Out of the 53 patients 39 survived and of those 18 (34%) reverted to sinus rhythm. No deaths were recorded in patients who cardioverted. There were contraindications to anticoagulation in 11 patients (28%) and 16 (4 1%) were prescribed aspirin. Only 6 patients (15%) were commenced on warfarin and INR was within the therapeutic range on discharge. Mean length of stay for this cohort was 16.7 days (range 0 - 85 days).
Chronic Atrial Fibrillation (n=100)
These patients were comparatively older with a mean age of 87 years. A.F Was the primary diagnosis in 18 patients (18%). No cardiac symptom was recorded in 60% and 29% presented with an infection. Fourteen patients in this group had chronic intermittent A.F.
Total duration of A.F was only available in 53 patients and averaged 3.42 years. Digoxin was the commonest antiarrhythemic drug used in 71% followed by amiodarone in 15% of patients and beta blockers in 7%. On the whole 22% of patients had drugs with potential for cardioversion. No patient had elective chemical cardioversion or Direct Current Cardioversion (DCC) at any stage in their treatment. Mean length of stay was 15 days (range 0 -103) and the mortality was 26%.

There has been increased emphasis on cardioversion12-13 and anticoagulation14-16 in patients with A.F. Physicians especially the non-cardiologists have been criticised for not managing these patients aggressively17-19. This study highlights issues such as frail status, multiple pathology and delayed hospital admissions in older patients, which may be responsible for low rates of cardioversion and anticoagulation.
The patients with new onset A.F.. were comparatively young, presented with cardiac problems, had less associated pathologies and were treated more aggressively. More patients in this group were considered for chemical cardioversion. No adverse drug reaction was recorded suggesting that chemical crdioversion is safe in the short-term management of acute A.F. Nearly half of those who survived had reverted to sinus rhythm on discharge. Those not considered for cardioversion were immobile, frail, had serious associated medical problems and were given digoxin for rate control20. This patient selection could have accounted for the increased mortality in the digoxin group. Most patients were considered for thrombo prophylexis.
Patients with chronic AF had been treated by a diverse group of clinicians in the past. The main emphasis of their treatment had been on rate control and cardioversion had not been performed. Though 41% of patient had aspirin or warfarin, most had inappropriate dosage. This reflects the problems surrounding less rigid patient selection or inadequate monitoring and can have serious implications21-23.
The limited choice of antiarrhythemic drugs in elderly patients is reflected by this study. lschemic heart disease, cardiac failure and respiratory problems precluded the use of most antiarrhythemic drugs and hence amiodarone and digoxin were commonly used. Some patients cardioverted in the digoxin group but this could be spontaneous cardioversion24,25.
The highest cardioversion rate (90%) and lowest mortality was noted in the group prescribed a combination of digoxin and amiodarone. Nine out of ten patients in this group reverted to sinus rhythm and the only mortality was recorded in the patient who failed to cardiovert. Aniiodarone is well known to be associated with high cardioversion rate, is capable of maintaining sinus rhythm and is well tolerated even with impaired left ventricular functions25-28. It is plausible that positive inotropic action of digoxin with its ability to reduce heart rate, improved left ventricular functions thus facilitating early cardioversion with amiodarone29,30. However small patient numbers and the design of our study does not enable us to deduce firm conclusions from these results.
There is no data on the long-term success or the side effects of DC cardioversion in older patients. The procedure requires general anaesthesia or sedation and for those admitted later than seventy-two hours, prolonged anticoagulation12. This may not be an option in frail elderly patients with serious associated medical problems. DC cardioversion is associated with serious side effects31-34 and these risks may be higher in very elderly patients. Immediate access to transthoracic and transoesophagal echocardiography, adequate monitoring and cardioversion equipment and trained personnel at all times limit the options for non-cardiologists35-37.
Lone AF is associated with low risk of stroke38 but was not recorded in this study supporting the view that lone A.F. does not exist in the very elderly hospitalised patients39.
In conclusion very elderly patients with AF are a diverse group with limited treatment options due to delayed hospital admission, multiple pathology and frail status. Only a minority would be suitable for elective cardioversion. Chemical cardiversion is safe in the short-term management of acute AF in older patients and those cardioverted have better prognosis. Awareness is required for adequate dose and monitoring of anti thrombotic medications, More research is needed to explore the role of DC cardioversion in older patients. Prolonged hospital stay and increased mortality makes atrial fibrillation an important health issue in the elderly population.