Introduction: Quetta, the capital of Baluchistan, is located at latitude 30,25; longitude 67.00. It has a population of 759,245; 425,474 males (56%) and 333,771 females (44%); Census 1998. The majority of residents are Persian or Baluchi speaking Baluchs.
Methodology: The cancer cases from Quetta reported to the Karachi Cancer Registry were reviewed. The data included cases from the Aga Khan University Hospital (AKUH), Pathology Department (Quetta collection point) and health care facilities in Karachi. The residents of Baluchistan were ascertained and cancer cases residents of Quetta identified with the help of recorded addresses and retraceable telephone numbers.
Results: During a 2-year period, 1st January 1998 to 31st December 1999 the Karachi Cancer Registry received 1077 cancer notifications from Quetta. Approximately half the cases were registered from the AKUH Quetta collection point. Others were the referral patterns in Karachi. The age-standardized incidence rate (ASR) of cancer, all sites (1998-99) was 137.0 for males and 92.8/100,000 for females. The commonest cancer in the males and females was cancer of the esophagus (lCD­10 categories C15; males- ASR 25.5, 17.2 %; females- ASR 23.4, 23.1%). One of the highest in the world, for both genders. Incidence of cancer breast in the females (lCD-10 categories C50; ASR 11.8, 13.3%) was low,
Conclusion: The cancer data from Quetta is quite distinct from the cancer pattern of Karachi. It represents only a part of the cancer burden of Quetta; nonetheless it gives a glimpse into the cancer profile of Baluchistan. The high incidence of esophageal cancer indicates an extension of the geographical limits of the esophageal cancer belt (JPMA 52:560; 2002).

Quetta is the capital of the Baluchistan, the Northwest Province of Pakistan. Baluchistan shares the 800 kilometers in length international border of Pakistan with Iran on the west, and part of the 2500 kilometers border with Afghanistan on the northwest1. The provincial boundaries are shared with Sindh, Punjab and the North West Frontier Provinces (NWFP). The city of Quetta, location, latitude 30.25; longitude 67.00 is approximately 720 kilometers from Karachi, the largest city of the country. It has a population of 759,245; 425,474 males (56%) and 333,771 females (44%); Census 19982. The district of Quetta is divided into an urban and a rural population. The urban population of Quetta comprises 40% of the total population whereas 60% of the population resides in the rural areas.
The majority of residents are Persian or Baluchi speaking Baluchs. Over 70 percent of the Baluchs live in Pakistan, with the remainder in Iran and Afghanistan1. The Baluch trace their roots to either tribes migrating eastward from around Aleppo, in Syria’ or a Caspian descent. The ethnicity therefore differs from the southeastern provinces of Pakistan with ethnic similarities to the Indo-Pak Subcontinent. The pattern of cancer reflects the Caspian heritage of the population and differs considerably from the only available population data for Pakistan i.e. Karachi3-5. The latter being more reflective of the pattern of the Indian region as the migrant population from India forms the predominant ethnic group in the city, and the effect of Westernization.
The objective of this study is to bring forth the cancer profile of Quetta, which is of interest in the context that there is no published data for comparison. The present data despite an emerging, distinctive cancer pattern, is not complete and may suffer from the biases associated from databases of selected medical institutions. It represents only a proportion of all those cancers, which may be occurring in the population; therefore conclusions drawn from this database must be interpreted in the light of information on selective factors that may be operating6.

The cancer cases diagnosed on the basis of clinical, biochemical, histological and hematological basis, and recorded at the Karachi Cancer Registry during a 2-year period (1st January 1998 to 31st December 1999) were reviewed and studied. The data included cases from the Aga Khan University Hospital (AKUH), Pathology Department (Queua collection point) and all primary health care facilities, diagnostic and treatment centers and hospices in Karachi. The residents of Baluchistan were ascertained and cancer cases residents of Quetta were identified with the help of recorded addresses and retraceable telephone numbers. The referral cancer cases in Karachi were mainly retrieved from the AKUH, Pathology Department (Karachi), Civil Hospital Karachi, Dow Medical College, Jinnah Hospital, Liaquat National Hospital, Edhi Cancer Center, and Ziauddin Cancer Hospital. However many other hospitals and laboratories contributed fewer numbers of cases. The AKUH pathology department has a collection point at Quetta that provides a major diagnostic service to the city. The demographic details of the registered AKUH pathology data were precise and complete. Items such as age, sex, name, address, telephone numbers and nature of surgery were well recorded at the reception counter. Awareness of the legal and academic requirements of such accurate demographic data was a part training of the collection staff. Validity checks and random retrace of cases was conducted for follow-up and for confirmation of the information recorded. The second category of cancer data was the cancer referrals to the diagnostic and treatment facilities of Karachi. The demographic details and retraceable telephone numbers had been recorded for outside-Karachi patients, as an exercise to improve the quality control of the Karachi data.
Computerized and manual validity checks for the cancer data were performed as per recommendations of International Agency for Research on Cancer (IARC) and International Association of Cancer Registries (IACR)7,8. This involved factors influencing comparability were classification and coding. The data was classified using the International Classification of Diseases-Oncology (ICD-O) (2nd ed.)9 and computerized using a customized version of Canreg-3, with internal checks on the validity of the entered data. Variables recorded were the hospital patient-number date of incidence, name, age, sex, address, topography, morphology, grading and staging.
Standardized incidence rate was calculated with an external reference population, the ‘world\'10 population with a given ‘standard’ age distribution. The standardized rate is the incidence rate that, theoretically, would have been observed if the population had a standard age distribution. The methodology applied was direct standardization. The rates given are the annual incidence per 100,000 population, averaged over the number of years for which data are presented. Logarithmic scaling, also called ratio scaling is used for the figures. This scaling is preferred to measure changes in value, rather than absolute prices; to compare two bits of unlike data; to analyze exposures over a long term; to compare trends and rates in different populations over different time periods. When values move in large percentages, trend line construction can be subjective and analysis unreliable. Logarithmic (Log) scaling overcomes this problem, rather than simply plotting values on the vertical axis in a linear fashion. These are plotted to indicate percentage or rate changes.

During a 2-year period between 1st January 1998 to 31st December 1999 the Karachi Cancer Registry received 1288 notifications from Quetta. 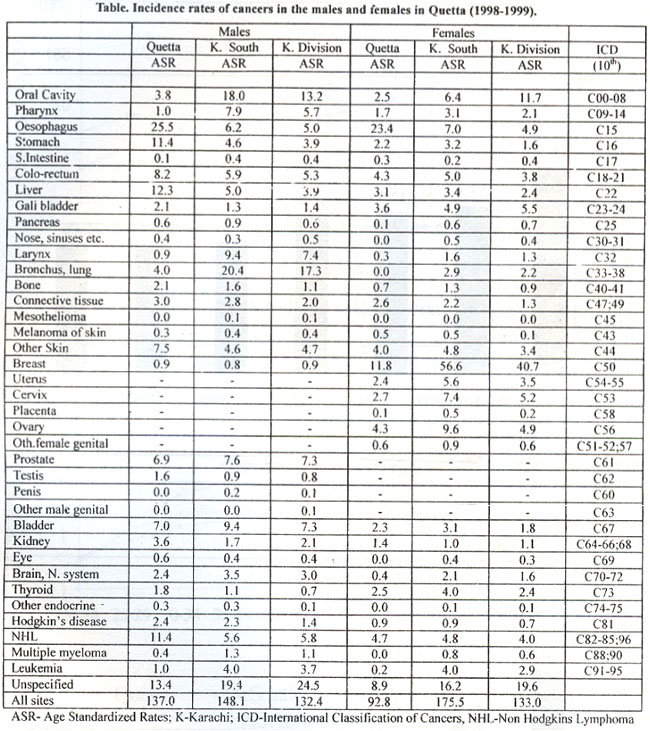 Approximately half the cases were notifications from the AKUH Quetta collection point. The others were the referral patterns in Karachi. 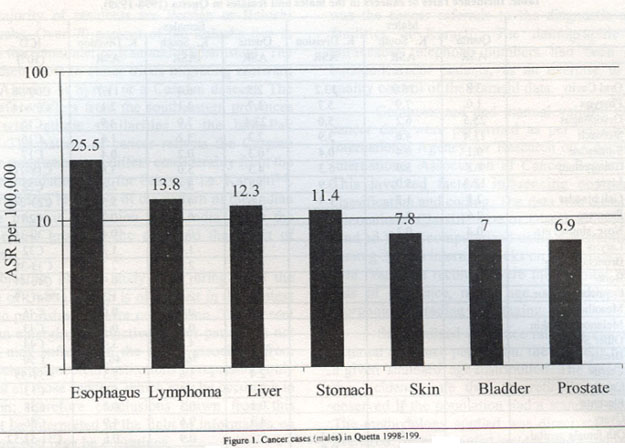 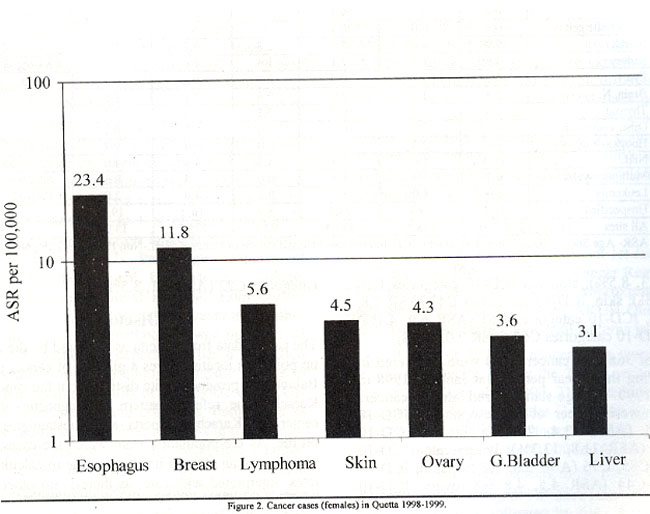 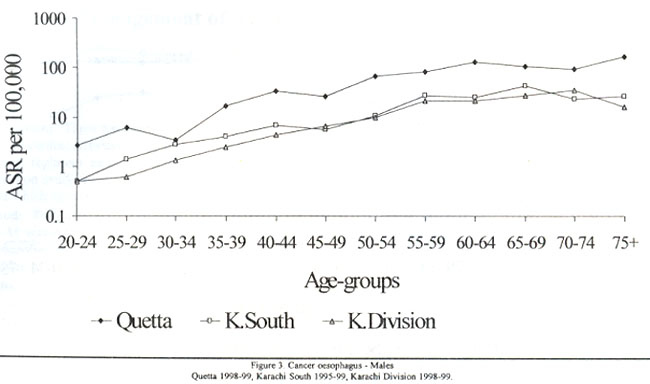 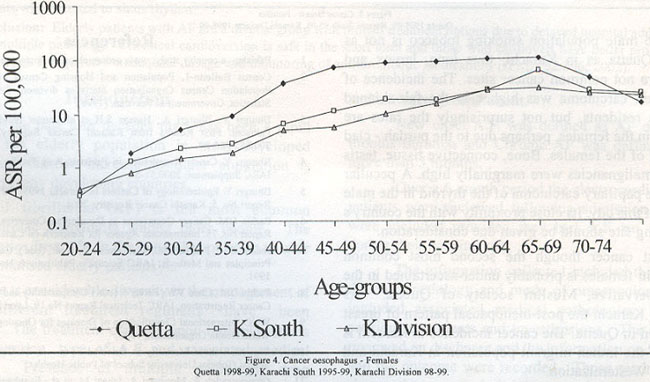 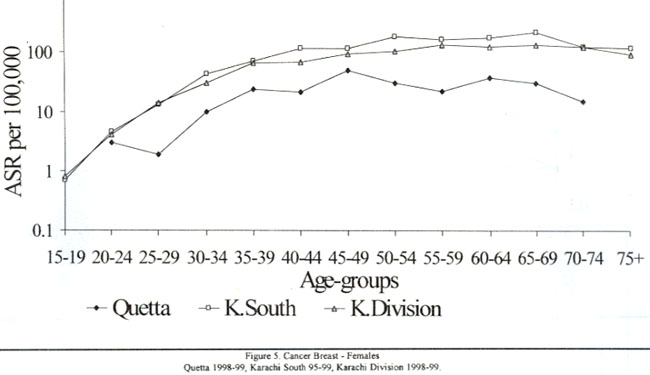