Objective: To look for risk factors leading to birth asphyxia in new borns admitted in a tertiary care unit. Study Design: Retrospective analysis.
Setting: Neonatal Unit of National Institute of Child Health, Karachi from 1st January, 2001 to 31st August, 2001. Patients and Methodv Records of 235 new horns admitted with birth a5phyxia during this period were analyzed, Variables studied included antenatal care, period of gestation, place of delivery, mode of delivery, birth weight and age at arrival in the hospital.
Results: Majority (71%) of mothers were booked and had antenatal care, similarly most (88%) of the babies were born at term and 75.3% were delivered in maternity homes or hospitals. Cacsarian sections were performed in 14% cases and rest were all vaginal deliveries. Fifty seven percent newborns weighed more than 2.5 kg and 22.5% presented to the hospital within 6 hours of birth.
Conclusion: Birth asphyxia occurring in such a high number of booked cases delivered at term with good weight, reflects the poor perinatal services offered in those maternity homes or hospitals. It is recommended that trained personnel and neonataL resuscitation equipment should be made mandatory in all maternity homes/hospitals (JPMA 52:553; 2002).

Birth asphyxia is one of the most important causes of neonatal brain injury whose incidence ranges from 3.7 to 9 per thousand deliveries in the west1. In developing countries it is considerably higher because of negligible antenatal care and poor perinatal services.
In Pakistan the magnitude of the problem is reflected by the fact that mortality data from a large community based prospective study in Lahore showed that nearly 50% of all neonatal deaths in the first week were due to birth asphyxia2. Both hospital and community based data from different parts of the country have identified birth asphyxia as leading cause of hospital admissions and neonatal mortality3-9.
Definition of birth asphyxia has remained controversial. Majority agree that it is the failure on the part of newborn to breathe spontaneously within one minute after birth10. However American Association of Obstetrics and Gynecologists defines birth asphyxia when the following criteria are fukfilled11: (I) severe metabolic or mixed acidosis (p11. <7.00) obtained on umbilical arterial blood if available, (2) a persistent >5 min. apgar score of 0­3, (3) evidence of neurological involvement i.e. altered consciousness tone and seizures, (4) other multiorgan involvement.
Birth asphyxia is more common in high risk groups (such as mothers with no antenatal care, multiple pregnancies, breech presentation and home deliveries by untrained personnel). The present study was can-led out to see that despite lot of efforts being made to reduce maternal and neonatal deaths, why is birth asphyxia being seen so often at a teaching hospital.

Retrospective analysis of records of 235 cases of birth asphyxia admitted in neonatal unit of National Institute of Child Health (NICH) was carried out from 1st January to 31st August, 2001. Total admissions during this period were 1145, of these 248 patients were admitted with birth asphyxia. Out of 248 cases, 235 had complete records and fulfilled the inclusion criteria and thus were included in the analysis. This neonatal unit is a 40 bedded tertiary care centre which receives sick neonates from all over Karachi and adjoining districts of Sindh and Balochistan. Admissions include all neonates except those with tetanus, those requiring mechanical ventilation or surgical intervention, who are admitted in tetanus unit, neonatal ICU or paediatric surgery.
For this study following criteria were used to diagnose birth asphyxia: (I) no spontaneous breathing one minute after the birth, (2) unable to cry for 1 minute after birth, (3) resuscitation needed at time of delivery, (4) respiratory distress reported with history of delayed cry, (5) abnormal neurological signs i.e. jitteriness, irritability; hypotonia lethargy, poor sucking and seizures.
Exclusion criteria were: (1) History of delayed cry but no cyanosis (2) or history of delayed cry with regular breathing.
The data was analyzed regarding antenatal care, period of gestation, place and mode of delivery, birth weight, age at arrival in the hospital, location/distance from where the newborn was referred; and the final outcome.

Analysis of records of 235 cases showed that 167 (7 1%) mothers had antenatal care and were booked cases. rest 182 (77.4%) They had minimum of three antenatal visits of which at least one was in the last trimester. Majority also had antenatal ultrasound, blood or urine examination done.
xcept for 53 neonates who were born preterm, the had completed full term period of gestation. One hundred and seventy seven (75.4%) were born in private maternity homes, nursing homes, government health centres, government hospitals and even large teaching hospitals, while only 24.6% were delivered at home.
Sex, antenatal care, period of gestation, place and mode of delivery and out come are shown in Table 1. 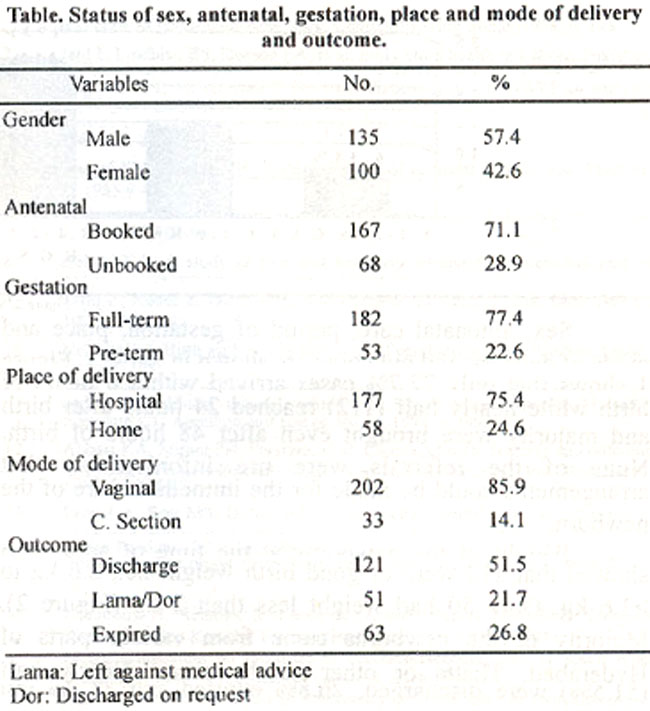 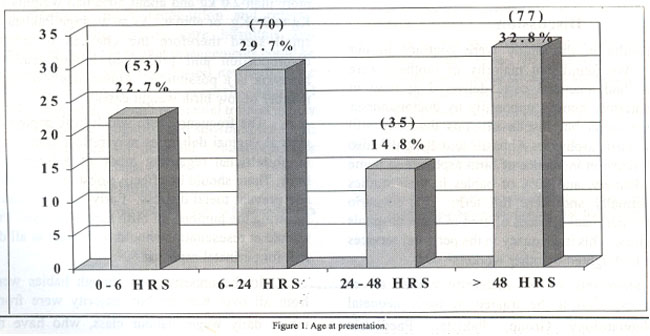 Figure 1 shows that only 22.7% cases arrived within 6 hours of birth while nearly half (112) reached 24 hours after birth and majority were brought even after 48 hours of birth. None of the referrals were pre informed so that arrangements could be made for the immediate care of the newborn.
Weight of the newborns at the time of admission showed that 112 were of good birth weight i.e., 2.6 kg to >3.6 kg. Only 50 had weight less than 2 kg (Figure 2).

Majority of the newborns came from various parts of Karachi while 25 were brought from outside Karachi i.e. Hyderabad, Thatta or other nearby areas. Nearly half (51.5%) were discharged, 26.8% expired and 21.7% left against medical advice.

The results in this study were contrary to our expectations. We found that majority of mothers were booked cases, had antenatal care, delivered at term in hospital or maternity home, supposedly by doctors/nurses i.e. trained personnel but inspite of this the baby still suffered from birth asphyxia. Abbasi12 and Sehgal13 also found no difference in incidence of birth asphyxia in home and hospital delivery, and 80% of babies in their studies were born normally and were full term. This scenario reflects that the perinatal services offered in these hospitals are unsatisfactory. This inadequacy in the perinatal services has also been highlighted by other workers9-14.
Birth attendants in the maternity homes or, at hospitals are expected to be trained in basic neonatal resuscitation. During workshops conducted in Sindh by National Neonatology Group, Pakistan Paediatric Association, it was found that of 302 doctors and nurses who received neonatal cardiopulmonary resuscitation training (CPR), nearly half were unaware of ambubag and only 12% had access to it. This shows poor knowledge and skill regarding the neonatal resuscitation even among health personnel15. Similar observations were made in Lahore by Bhutta16.
As regards support services in terms of availability of drugs and equipment, the situation analysis presents a gloomy picture9,17. Poor infra structure, non availability of essential drugs and equipment, lack of proper referral facilities etc. are major problems for effective neonatal care. This is also reported from the neighboring countries18.
The delay in referral may be due to failure of recognition or reluctance on part of referring health facility to admit their shortcomings or negligence. Delayed uninformed and unstabitized referrals are associated with poor prognosis. Similar referral trends were seen in other studies also9,12,18,19.
Low birth weight has association with birth asphyxia, but in our study nearly 79% newborns weiglied more than 2.0 kg and about 50% had weights between 2.6 Kg to 3.6Kg or above. As an average Pakistani woman is small sized therefore the chances of cephalo pelvic disproportion and prolonged labour leading to birth asphyxia is a possibility. Abbasi has also reported small number of low birth weight cases12.
The frequency with which birth asphyxia is seen in normal vaginal deliveries may reflect upon the judgement of obstetrician regarding mode of delivery of a healthy baby. There should be effective obstetric measures to detect and prevent foetal distress. Early intervention may help in lowering the numbers of birth asphyxia cases. Paediatriciari trained at resuscitation should be present at all deliveries at risk for perinatal asphyxia20.
In the present study though babies were received from all over Karachi but majority were from Korangi, Malir and Akhter Colony. These are mainly urban slums where daily wagers/labour class, who have migrated to Karachi for better job opportunities are residing. They live as small families either in flats or as Katchi Abadies with incomplete basic facilities. Despite all these financial constraints they opted to be registered with nearby doctors and delivered under their supervision with an intention to provide better medical services to the mother or the newborn. The results were otherwise to their expectations and same has been pointed out elsewhere that health care services of penurban settlements were found worse than rural areas2,21.
Nearly half of the babies (5 1%) were satisfactorily discharged home. A significant number 26.8% expired in the ward. In reality this number may have been more as we do not know the fate of the 21.7% who left against medical advice or had early discharge on request. Many of them may have expired at home, adding to mortality figures.
It is ironic that a normally developed foetus should sustain cerebral injury during the last hours of perinatal period, which may lead to life long handicap or disability, even if the baby survives. It is important to realize that birth asphyxia; one of the major determinants of infant mortality and morbidity is preventable to a large extent. We need to bring major reforms in our health delivery system.
It is recommended that in the labour room there should be at least one person responsible for giving basic care to the new born baby, initiating resuscitation if necessary and summoning for more help if needed22. A properly trained person in neonatal resuscitation preferably a Paediatrician should be present at every delivery specially the high risk ones. Presence of working resuscitation equipment e.g. suction proper size ambu bag, endotracheal tube, neonatal laryngoscope and oxygen supply should be made mandatory. Hospital paramedics should be trained regularly in basic newborn care including preliminary resuscitation measures. Early recognition and referral should be made to the tertiary care hospitals and preinformed referral be made so that arrangements could be made before arrival of a sick asphyxiated newborn. Prior stabilization and transport in a properly equipped ambulance with oxygen and health personnel trained in new born care would improve prognosis and so would the CME programmes or seminars on neonatal resuscitation for Paediatricians and Obstetricians.