Primary brain tumours are among the top 10 causes of death due to cancer with over 13,000 people dying from them each year1. Increased brain tumour incidence and mortality up to 300 percent over the past 3 decades in developed countries has been primarily observed in the elderly and 35 percent in children2. Surgery and radiation are front line treatments for patients with malignant brain tumours but these modalities alone arc rarely curative3 thus the need for newer and more innovative approaches to therapy are apparent.
The central nervous system (CNS) is immunologically an unusual tissue owing to presence of blood brain barrier (BBB), which is able to exclude many components of immune system4. The BBB refers to the morphological basis for restriction of protein diffusion from blood into the brain tissue, in particular by the brain capillary walls. So the elucidation of protein patterns in response to brain tumours is likely to be invaluable in achieving greater insights into tumor biology and immunology and could facilitate the development of such therapies5. In fact, new physiologically and biophysically based concepts of blood - CSF barrier function as well as extended knowledge of neuroimmunology have lead to an increased awareness of the clinical reliability of albumin and immunoglobulin based data patterns6. Detection of intrathecal synthesis of specific antibodies and a reliable concept for evaluation of brain derived proteins in CSF and blood have yielded essential improvements in clinical relevance of CSF analysis7. Therefore, we examined serum and CSF immunoglobulin concentration in brain tumour patients, since they may be regarded as an indication of humoral immune reaction. The serum and CSF immunoglobulin and albumin concentration also provide
information with respect to functional status of blood brain barrier (BBB) and CNS protein synthesis in intracranial tumors8.

The subjects of this study were inpatients of Lahore General hospital, Lahore. Study included 37 patients with intracranial tumors. Their mean age was (mean ±SD) 28.90 ±15.90, and the group consisted of 26 males and 11 females. Diagnosis was established by conventional clinical methods and by special investigations including CT scan and was confirmed by histological examination of operative biopsy. Most of the patients were receiving steroid therapy prior to surgery. For the purpose of this study patients were classified according to tumor type as defined by WHO classification of CNS tumors9.
Twenty subjects, not suffering from any neurological disease, including 14 males and 6 females, ages ranging from 8 - 60 years were taken as controls. Blood samples were taken from patients 24 hours prior to surgery. Serum was separated. Ventricular cerebrospinal fluid (CSF) was collected in the operation theatre at the time of surgery. Serum and CSF was kept in 2 aliquots. Glucose, Total protein, Albumin in serum and CSF were estimated on the same day, while another aliquot was frozen at - 40°C for electrophoresis and immunoglobulins assay. CSF was concentrated by the method described elsewhere10 for the purpose of electrophoresis and immunoglobulin estimation.
Quantitative measurement of serum and CSF immunoglobulins lgG, IgA, 1gM were evaluated by radial immunodiffusion (RID) method of Mancini et aP’, through the use of commercially available kits, supplied by Kallastad Laboratories USA. In each well 5 ul of standard, patients and control serum and 10 ul of CSF were applied.
Plates were incubated at room temperature for 48 hours. The precipitin ring diameter was measured by means of an optical comparator having resolution of 0.1 mm. Resultant ring diameter were converted to mg/dl through the use of standard curve table supplied with the RID plates.
The concentrated CSF specimens were electrophoretically examined simultaneously with corresponding serum by means of cellulose acetate membrane electrophoresis (elvi 70 tank), and the density of bands was determined by elvi 165 densitometer. For statistical analysis Student \'t\' test was used.

Thirty seven cases of intracranial tumors and 20 control subjects were included in this study. Gliomas were most common tumours (38%) followed by neurinomas (21%), medulloblastoma (11%), meningioma (11%), pituitary adenomas (8%), craniopharyngioma (8%) and epidermoid cyst (3%). The difference between total protein, albumin and different fractions were not significant (Table 1). 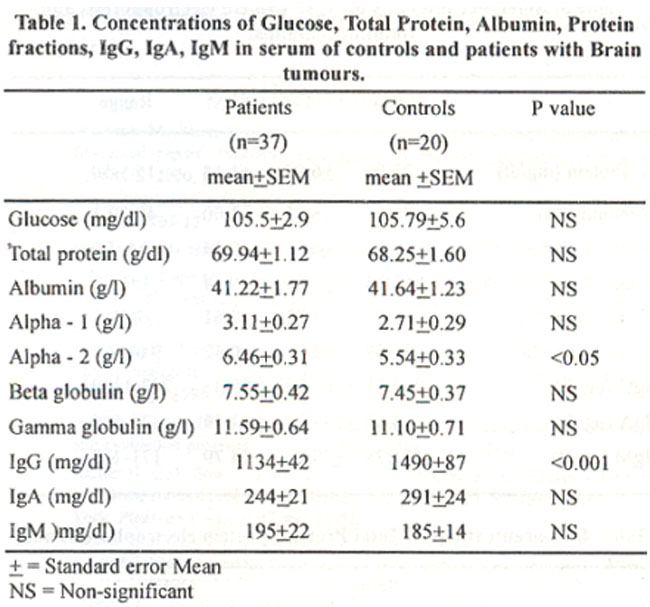 However, in 3 cases (one neuroma, 2 astrocytoma H) albumin was high and above 73%. In addition to that alpha II concentration was significantly higher (P<0.05) in brain tumor patients than controls and in one patient with epidermoid cyst, gamma globulin was very low (2.4% of total protein.).
Mean serum IgG concentration in patients was significantly lower (P<0.001) than control subjects. When compared between malignant and benign tumors, IgG was significantly lower (P<0.05) in malignant tumours than in benign ones (Table 2).

The mean IgA was lower in patients than in controls but statistically non-significant. The difference of mean serum IgA levels between patients with benign and malignant tumors and between patients and controls was statistically insignificant but the mean values in adult patients were significantly higher (P<0.01) than in children patients. There was no difference in mean value of 1gM in various groups.
Ventricular CSF glucose was 78 ± 3 mg /dl, values ranged from 45 - 110 mg /dI. Mean total protein was 23.09 ± 1.14 mg /dl and values ranged from 14 - 50 mg /dl (Table3). 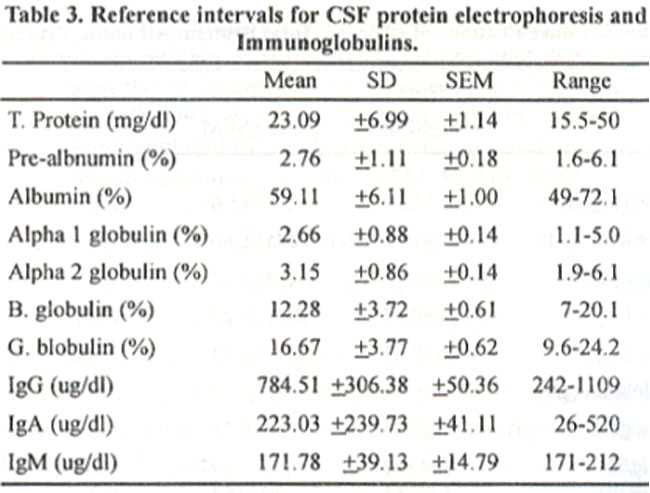 Total albumin was 59 percent of total protein. The mean CSF gamma globulin was 16.67±0.62 percent. Both albumin and gamma globulin were significantly higher (P<0.001) than normal ventricular values of Hill et al.
Immunoglobulin G (IgG) was detectable in all 37 cases, and values were (mean ± SEM) 784.5 ± 50.36 ug /dl. IgA was not detectable in three out of 37 cases (One craniopharyngioma, one astrocytoma II and one Glioma II), and level ranged from 26 -520 ug /dl, with a mean level of 223 ± 41.11 ug /dl. Immunoglobulin M (1gM) was detectable only in 7 out of 37 cases with values ranging from 171-2 12 ug /dl. Four of these cases were gliomas, 2 pituitary adenomas and one medulloblastoma.
The estimated ranges of Protein electrophoresis and IgG, IgA and 1gM were calculated as Mean ± SEM. The 95% confidence interval of these values were estimated by applying single group Student ‘t\' test and values were found statistically significant with P < 0.001 (Table 3).
Level of IgG and IgA in malignant tumours was significantly higher with P value <0.001 and P<0.05 respectively than benign tumours (Table 2). 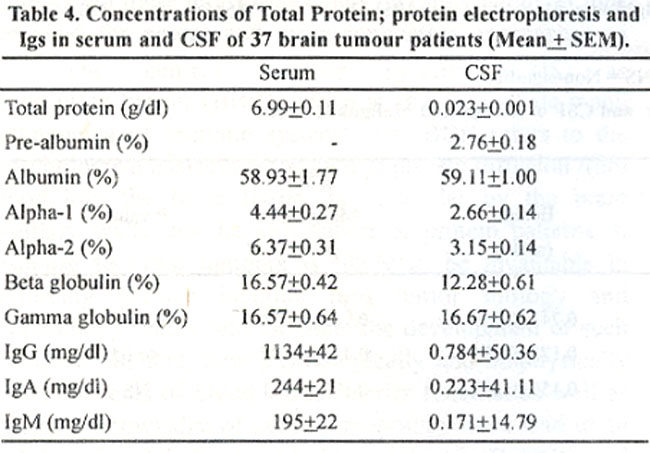 Table 4 shows values of different proteins and immunoglobulins in serum and CSF of 37 patients with different types of intracranial tumours.The albumin quotient (CSF AIb / Serum Alb x 1000) was determined by the method of Trbojevic-Cepe4 for assessing level of dysfunction of BBB.

The principal reasons for the study of serum protein fractions in neoplastic disease are two: the need for objective criteria for evaluating tumour therapy and the need for better understanding of the systemic effects of tumour on the host12. Inadequate immune reactions in cancer patients is an indication of the continued presence of the neoplasm, progressing in its course towards a worsening clinical state. In turn, one might equate adequate immune responses or any improvement in these functions as indicative of a favorable subsequent clinical course13. Humoral immunity has its role in host tumour interactions14 and changes in different serum and CSF proteins in patients with cancer reflect chiefly the reaction of the host to the presence of tumour.
We, like other workers14 did not find any essential differences in the serum total protein and protein electrophoresis, performed in 37 patients with brain tumours and 20 control subjects. However, alpha II globulin was significantly (P<0.05) elevated in our cases, while it was increased only in 3 out of 43 cases with brain tumours studied by Polkowka-Kulesza et al15.
Serum IgG was significantly lower (P<0.00l) in brain tumour patients compared with controls. In addition, lgG was significantly low (P<0.05) in malignant tumours compared with benign. These findings are in agreement with many other workers16,17. However, few other workers15,18,19 found no changes in any of immunoglobulins in their studies. Contrary to present findings, few recent studies from Turkey20 and from India21, have reported significant increase in IgG in benign and malignant brain tumours.
The mean values of IgA was slightly but not significantly lower in our cases than controls, but Manjula et al21 in India found increased IgA in benign tumours. Serum 1gM in our cases was not different from control group, nor there was any increase in 1gM in meningioma case as reported by Tokumaru and Catalano17. These findings are consistent with other studies13,15. On the other hand, Manjula et al21 found 1gM significantly high in all types of brain tumours.
There is mounting evidence that an immunosuppressive factor present in the serum of patients with unfavourable cancers reside in the alpha - II globulin fraction12. In addition, most of our cases were on steroid therapy, which is known for immuno-suppressive effect. Both of these factors: increased alpha-Il globulin and steroid therapy might be contributing to decrease Immunoglobulins in our cases. Nevertheless, these controversial findings by ditlerent workers in different parts of the world needs wider immunological monitoring of brain tumour patients.
As far as we have searched the literature, no study on ventricular CSF of brain tumour patients is carried out. However, whatever literature is available, it is on the lumbar CSF. Hill et al22 have given us normal values of different proteins in ventricular CSF. We have compared our values with these findings. Protein content is normally higher in Lumbar CSF than Ventricular CSF22-24 and there is an inverse relationship between the hydrodynamic radius of protein molecule and their ease to access to the CSF from the circulation25.
Total protein in our cases was higher than normal values22 but statistically non- significant. However, albumin and gamma globulin in our cases were significantly higher (P<0.001) than accepted normal values. When albumin quotient was calculated, it was 3.2 and slightly higher than normal values of Trbojevic-Cepe4. This indicates that there was no significant dysfunction of BBB.
In our cases increased gamma globulin in CSF, with almost intact BBB, as assessed by albumin quotient, can be attributed to be produced within the brain. This finding is in agreement with many other workers4,26,27 who also found growing evidence that stimulated brain cells can synthesize different proteins.
Our findings of increased immunoglobulins in CSF are in accordance with many other studies27-30. There was significant increase (P<0.001 and <0.05) in lgG and IgA in malignant tumours than in benign tumours and is comparable with other workers29,31,32. However, Nerenberg et al28 found no change in IgG however, both IgA and 1gM were increased significantly in their cases.
Reiber et al6 have suggested that as a consequence of low transfer of blood derived antibodies to brain and CSF, the brain derived CSF antibodies contribute a relatively large proportion of total CSF antibodies. We also agree with the above findings, as increased level of immunoglobulins in our study and more so in malignant cases suggest intrathecal production, also supported by other workers33.
In conclusion, the results of this study reveal that serum immunoglobulins are suppressed in intracranial tumours, and more so in malignant cases. On the other hand CSF immunoglobulins are raised than normal values and increase is more marked in malignant cases than in benign ones. As a general principle, increased blood concentration of serum protein result in higher CSF concentration6. However, in our cases of brain tumours serum immunoglobulins were low, so it is not possible that these low level serum immunoglobulins might have crossed BBB by passive diffusion and raised levels of CSF immunoglobulins. This establishes the fact that these raised immunoglobulins in ventricular CSF are produced within the brain and human brain is capable of responding to tumour antigens by activating production of immunoglobulins intrathecally.
Although RID is a relatively insensitive method, further studies on humoral immune response in brain tumour patients with more sensitive methods like RIA or Laser Nephlometer (LN) can lead to reach any definite conclusion.