Alpha I antitrypsin, a 52-KD glycoprotein functions as an anti-protease. The deficiency, an autosomal recessive disorder is characterized by reduced serum levels1-3 and is caused by mutations in the alpha 1 AT gene, a pleomorphic 12.2-kb, 7-exon gene on chromosome 14q 3 1-32.34. Most cases involve two mutations, Z and S. Various homozygous and heterozygous combinations of different mutations of alpha 1 AT gene are associated with low levels in a number of diseases such as emphysema and cirrhosis5. The deficiency has also been suggested to be involved in disease conditions such as pancreatitis and duodenal ulcer5,6. Significantly lower values are found in patients with duodenal ulcer and the deficiency is present in both, homozygous and heterozygous state. Most of the duodenal ulcer patients with the said deficiency also have a positive family history of the same disease6.
Considering the involvement of this protein in various disease conditions, it seems important to evaluate the deficiency state more accurately and its relationship to some of the disorders commonly found in the region. Need for such study is further augmented particularly when one observes large number of incidences of duodenal ulcer in the local population. While investigating such relationship one needs to be conclusive in terms of identifying the specific variants. For this reason it is imperative that most reliable and accurate techniques must be applied.
This study was therefore conducted to confirm alpha I AT deficiency status in duodenal ulcer by using a combination of Polymerase chain reaction (PCR) and restriction enzyme digestion.

Fifty adult patients with endoscopically proven duodenal ulcer were selected for the study. One hundred dyspeptic adults without history of peptic ulcer disease and normal endoscopy and were used as controls. Diagnosis of duodenal ulcer was based on endoscopy and further testing facility for H.pylori were not available at the time of conducting the project and none of the patients had chronic obstructive pulmonary disease or liver disease.
Written consent was obtained from all subjects and an approval was granted by the ethical committee of the Jinnah Postgraduate Medical Centre, Karachi. Ten ml blood samples were drawn with minimum stasis and sera separated were stored at -70° C until analyzed. Quantitative measurement of serum alpha I AT was carried out by single radial immunodiffusion (RID) technique using M Partigen immunodiffusion plates7 (BehrIng Diagnostic, Marburg, Germany). Phenotyping was performed by ultra thin layer polyacrylamide gel iso-electric focusing, IEF8, using gels containing 2% ampholytes in the pH range 4.2-4.9. The computer software package EPI-Info ver 5.0 was used for data feeding and anlaysis. Mean, Standard error (SE) and student t-test were calculated for difference between two groups.
Polymerase Chain Reaction
DNA extracted from freshly drawn bJood samples by the standard method9 was subjected to a nonradioactive PCR assay10. Briefly, specific DNA regions in the alpha 1 AT gene were amplified using primers deduced from exon III for S mutation and exon V for Z mutation. Primers were essentially the same as described10. We used PCR core reagent kit (Perkin-Elmer Cetus, USA). Reaction mix (100 ul) contained IX PCR buffer (10 X cone of 0.5 mol KCI, 0.lmol Tris-HCI, 15 mmol MgCl2 and 0.01% gelatin, pH 8.3), 1 u.tg DNA template, 30 pmol of each primer, 200 nmol each dNTPs and 2 units of Taq polymerase was prepared in a PCR tube and overlaid with paraffin oil. Amplification was carried out on an automated Thermal Cycler 480, (Perkin-Elmer Cetus Corporation, USA) using the following cycling conditions, denaturation at 94° C; 1 minute, annealing 550 C; 1 minute and extension at 72°C for 1 minute. Final extension was carried out at 72°C for 7 minutes. Blanks were included at all steps to make sure that amplified products are not resulting due to cross contamination between the samples or any other sources. Efficacy of PCR was checked by subjecting the amplified products to agarose gel electrophoresis followed by ethidium bromide staining.
Restriction enzyme digestion for the S and Z mutation
Restriction enzymes Asp-700 and Taqi were purchased from Boehringer, Mannheim, FRG. Amplified PCR product (20 micro liter) was digested overnight with respective restriction enzymes i.e, Asp-700 at 37°C for S mutation and Taq 1 at 65°C for Z mutation. After 14-16 hours, 10 more units of the enzyme were added and the digestion was continued for another 2 hours. The digested and the undigested products were analyzed on a 3% agarose gel after staining with ethidium bromide. The size marker was 4X174 Hae Ill digest, supplied by Sigma, USA. 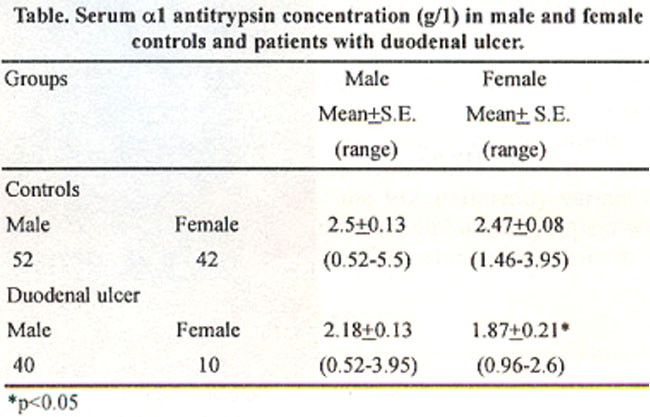 Table 1 represents the concentration of serum alpha 1 AT in controls and patients stratified into males and females, In male controls and patients odds Ratio = 1.6, 95% confidence interval 0.52 - 4.9, p value. Not significant). In female controls and patients odds ratio = 12.0, 95% confidence interval 1.9-63.7, p value = 0.01.
IEF revealed that phenotype MM was found in 70% of the healthy controls, followed by MIM2 in 28% and FM3 in 2%. Phenotyping in duodenal ulcer showed predominantly MM (70%), followed by M1M2 18%). However, phenotypes associated with deficiency states were also present in greater frequency. These included SZ (4%), SS 4%), ZZ (2%) and MZ (2%); MZ, SZ and SS represent partial and ZZ complete deficiency of this protease inhibitor. Protein bands in the pH range 4.2-4.9 on IEF gels were not prominently visible in some of the heterozygous and homozygous alpha 1 AT deficient cases. In such situation identification of alpha 1 AT bands of IEF gel was further confirmed by immunofixation9, which showed that in the sera of those patients very faint bands were present in the same region. Even this could not provide accurate discrimination between SZ and SS mutations. Hence, further confirmation of phenotyping was done by DNA analysis techniques.
DNA extracted from controls and patients were subjected to PCR reaction using two sets of primers to detect S and Z mutations. This was followed by restriction enzyme digestion with Asp 700 and Taqi as described. The digested and undigested DNA was then analyzed on agarose gel. In S mutation assay, a 149 bp-amplified product was present prior to restriction digestion. After subjecting to restriction enzyme digestion, homozygous persons showed a single band of 133 bp. 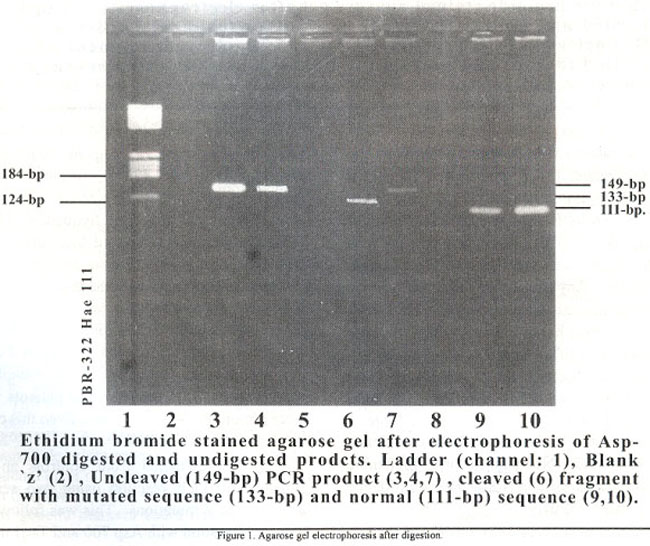 (Figure 1, lane:6) Individuals who did not have the S mutation showed only one band of Ill bp (Channel 9, 10) and heterozygous for the S mutation showed both the 133-bp band and the 11 l-bp band (not shown in this figure).
!n the Z-mutation assay, amplified product prior to restriction digestion was of 97 bp (Figure 2, lane 3) 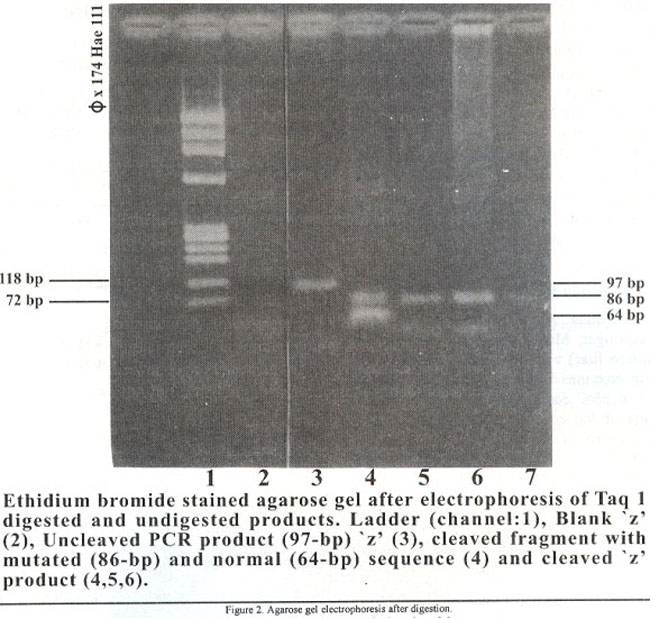 Traditionally the diagnosis of alpha 1 AT deficiency has been based on IEF, together with the determination of its serum concentration. Recently diagnosis involves detection of mutation responsible for the disease by PCR based methods that not only provides early identification but also distinguishes homozygous and heterozygous alphal AT deficient states10-12.
It is widely believed that interaction of certain genetic, environmental and other factors like stress might collectively produce alteration of gastric secretions to such an extent that it leads to low resistance of gastric mucosal cells which in turn determines the predisposition to the development of duodenal ulcer. The pattern of duodenal ulceration in Pakistan is similar to that of the developed countries, with majority of patients between 3rd-5th decade of life13. In the present series, none of the patients were on NSAIDs (Non steroidal anti inflammatory drugs).
Alpha I AT is a protease inhibitor and inhibits many proteolytic enzymes in blood6. It is interesting to speculate whether a deficiency of protease inhibitor can make the duodenal or gastric mucosa more susceptible to ulceration. As some phenotypes of alpha 1 AT are associated with deficiency states leading to certain abnormalities, there is a reason to incite clinical interest in identifying genetic variants and phenotyping those who could be at risk. Deficiency of alpha 1 AT exists due to allelic variation and results in decreased production of alpha I AT. A deficiency might therefore be linked to the causation or persistence of duodenal ulcer. This postulate is supported by our previous findings where patients (10%) identified with deficiency of alpha I AT had relapse and duodenitis persisted in spite of long term follow up and treatment with antacid and H2 receptor antagonist14. A deficiency state even of intermediate magnitude might carry a greater risk of either developing duodenal ulcer or aggravation of disease in such individuals than those with values within the normal range. The presence of genetic markers could have been of the tactor responsible tor a poor, response to therapy leading to frequent relapses which makes it pertinent to consider if there is any involvement of alpha 1 AT in this condition. Serum alpha 1 AT was also analysed in patients with pulmonary emphysema15 and in those with liver disease16. Ten percent of the patients with emphysema manifested low levels but did not exhibit abnormal patterns subjected to isoelectric focusing. The same holds true in patients with liver disease. There was no evidence of COPD/liver disease in duodenal ulcer patients with aIAT deficiency.
Frequent relapses of duodenal ulcer, in spite of long term follow up and treatment is indicative of genetic etiology and as such genetic markers should be assessed. Immediate family members of such patients should be screened to identify those carrying the trait so that they could be advised from aggravating environmental and other factors. In an earlier study17 the PIZ deficiency variant of the major plasma protease inhibitor alpha 1 antitrypsin was also assessed as a risk factor for peptic ulcer disease in H.pylori infected individuals which could also be studied in our patient population.