Objective: To compile available information - both hospital and community based - on the maternal mortality ratios (MMRs) and the causes of maternal deaths in Pakistan
Methods: Data was collected from articles published in Medical Journals, in Proceedings of Conferences and of Workshops as well as from News letters of the national Committee for Maternal Health (NCMH). The data was then tabulated in order of the year of publication.
Results: The MMRs reported from hospitals vary between 17 in a private tertiary hospital to 2736 in a government tertiary hospital. In the community the range is from 160 in Sindh to 673 in Khuzdar.
Data for different periods of time from three tertiary public hospitals, two in the south and one in the north of Pakistan, show no decrease in MMRs. The trend remains the same.
In the hospitals over 80% of the deaths are due to direct causes. The most common cause of death is hemorrhage, followed by eclampsia and sepsis. The causes of death in the community are also the same though the proportions vary. Direct causes account for 78.1% of deaths, hemorrhage being the most common followed by sepsis, eclampsia, rupture of the uterus, and abortions.
Conclusions: Available data shows that the Maternal Mortality Ratios in Pakistan continue to remain high despite attention paid to maternal health. To address the unacceptable state of maternal health, a policy change with a morc comprehensive and integrated approach to maternal health services is needed. Strategies need to be developed which are short term, medium term and long term. This includes competency based training, deployment and supervision of a cadrc of skilled attendants for delivery at the community level. In addition upgrading of health care systems especially availability of emergency obstetric care is urgently required (JPMA 52:539; 2002).

The Maternal Mortality Ratio (MMR) of a country is indicative of its health and development status. Information on maternal mortality is required to determine this status and to set priorities for policy making and programmatic and operation research strategies.
Data from around the world shows that there is great disparity between the maternal mortality of the developing and developed world1. Even among the developing countries the MMRs vary widely. A large number of maternal deaths are reported from most of the developing countries but the exact numbers are not known. Registration of vital events like deaths and births is incomplete and at times inaccurate. Surveys and studies to determine the magnitude and causes of maternal deaths on a national basis are both complex and costly2. Hence population based data, especially nationwide, is scarce. Hospital-based data is more easily available, and although it is well known that hospital data is not representative of the general population and is biased, it does serve as a basis for policy making, for advocacy and for determining trends over a period of time.

In this paper available information on maternal mortality in Pakistan from both hospitals and community has been collated. Most of this data has been published in journals which are not listed in the Index Medicus and are thus not easily retrievable. In addition to published articles, information printed in the newsletters of the National Committee for Maternal Health (NCMII) and in Conference proceedings have also been included. The information presented in the papers is not uniform e.g. the booking status of the women was not given in most of the reports. Hence this information has not been shown in the table. Some of the MMRs reported are based on total births and not live births3-5 and this has been indicated in the table.
The multi-hospital figures include government hospitals, other public sector hospitals and a few private hospitals. All information has been tabulated according to the year of publication. The years covered by the report are shown in brackets against the name of the institution/s. 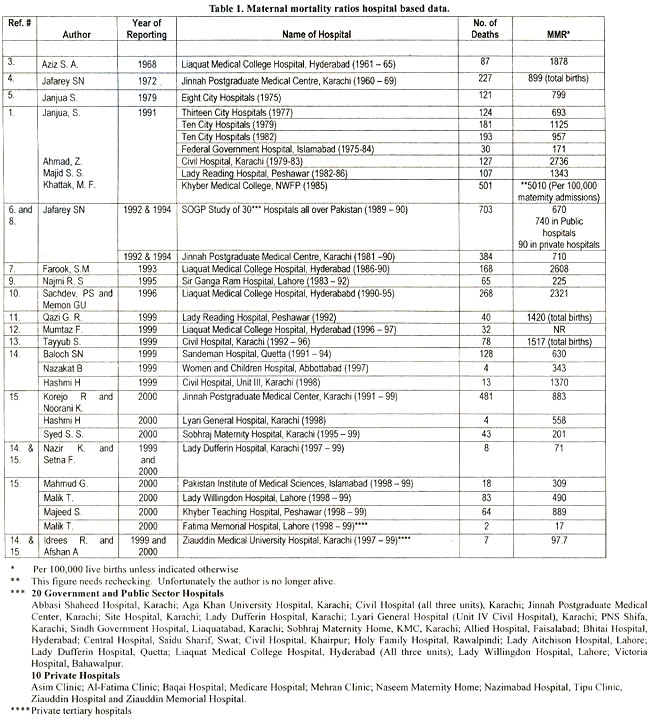 The earliest paper is from Liaquat Medical College, Hyderabad that gives data for the years 1961 to 19656. In 1970’s there were two reports3,7. The majority of the reports are from the 1990’s4,5,8-17.
The number of deaths on which the MMRs have been calculated range from 2 deaths in one year in a private tertiary hospital in Lahore15 to 703 deaths in 2 years in 30 Pakistan8,10.The figures are based on information covering 1 to 10 years.
The MMRs reported by various hospitals range between 17 at Fatima Memorial Hospital, Lahore and 2736 at Civil Hospital, Karachi1. The figure of 5,010 reported from Khyber Medical College, Peshawar and calculated from 100,000 maternity admissions (Khattak MF) is much above figures from another campus of the same institution (Majid SS). Since the author is no longer alive it is not possible to verify or get further information about this.
Three public tertiary hospitals have reported figures over different periods of time. This shows very little change in the trend (Table 2). 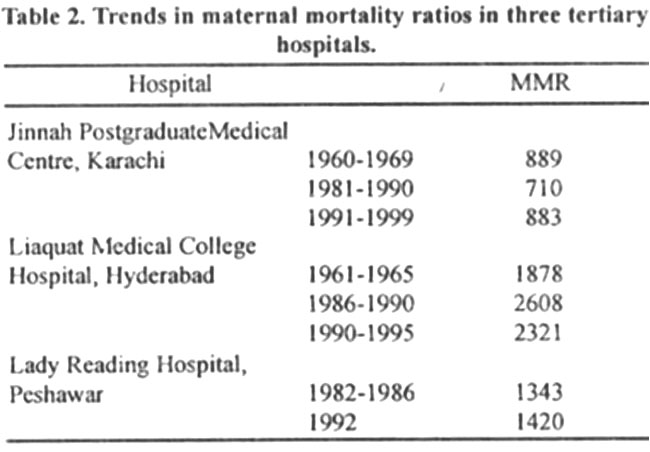 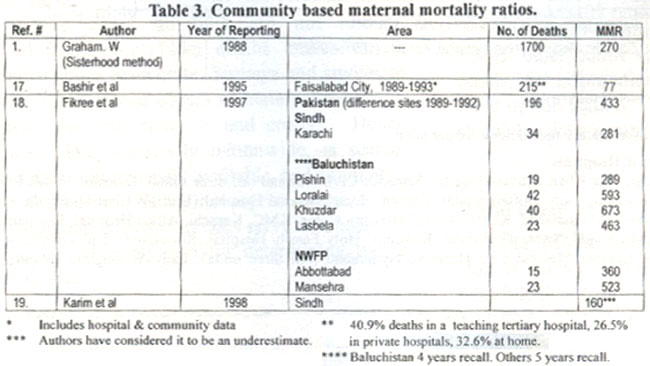 The study by Fikree and co-workers includes samples from Sindh, Baluchistan and NWFP18. The table shows the MMR in different places ranging between 281 and 673. The figure of 160 from the province of Sindh has been stated by the authors to be an under-estimation19.
Causes of Death
The major causes of death in hospitals are given in Table 4. 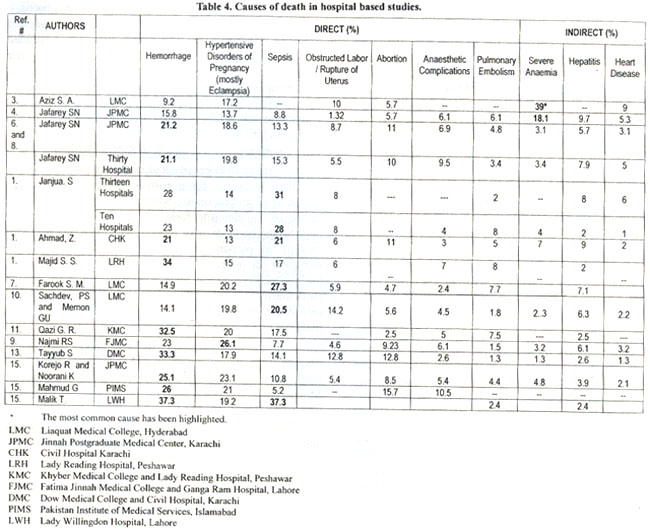 Information, which was not clearly stated, has been excluded. The cause of death has been based on clinical features alone as post mortems were not carried out in any case. The most common cause in each study has been highlighted in the table.
Over 80% of the deaths are due to direct causes. In the majority of the studies haemorrhage is the leading cause. In six studies1,9,12,15 it is sepsis and11 eclampsia. The contribution of abortion data of which is given in 12 studies, ranges between 2.5% and 15.7% with a mean of 8.5%. Anaesthetic complications are a significant cause of death ranging from 2.6 to 10.5% (mean 5.6%). Among the Indirect causes two early reports3,6, show severe anaemia as the most common cause of death (39% and 18.1%). Hepatitis too contributes significantly (2to 9.7%).
Major Causes of Death in the Community
In the community 78.1% of the deaths were due to direct causes and 21 .9% to indirect causes. Hemorrhage was responsible for over half the deaths i.e. 52.9%. The second most common cause was Sepsis (16.3%) followed by Eclampsia (14.4%) and Obstructed labor (6.5%.) Abortion caused 5.2% of the deaths. Among the Indirect causes Hepatitis was the most common (14%) followed by Heart disease 9.3%.
A Study of Mothers Brought Dead to JPMC
A study was carried out at JPMC to establish the factors that caused delay in women reaching hospital in time. This showed that during a twelve year period 1981 -1992 a total of 601 maternal deaths were seen in the Department of Obstetrics and Gynaecology. Of these 150 (25%) women were brought dead16. The reasons for delay were economic, like non-availability of transport and lack of finances (3 6%), soclo-cultural factors including absence of husband from home (34%), inadequate and inefficient maternal health services (2 1%). In 9% the reason for delay could not be determined.
The most common cause of death amongst these 150 women was haemorrhage (63% of which 42% were postpartum haemorrhage) followed by eclampsia (19.3%) ruptured uterus (9.3%) and acute inversion of uterus (6%.).

My sincere thanks to my husband, Prof. Naeem A Jafarey, for the help and encouragement given to me in the preparation of this paper.

After the submission of the above paper two further reports on maternal morbidity have been published. These are: 1. Akbar N, Shami N and Asif S. Maternal mortality in a tertiary care teaching hospital. JCPSP., 2002; 12: 429-431 and 2. Sami S and Balooch SN. Maternal Mortality in
Balochistan: a challenge for the Obstetrician. JCPSP., 2002; 12:468-71.