Objective: To assess the impact of various sources of information on school going adolescents (belonging to higher social strata between ages 14-19 years) regarding Hepatitis B; its various types, importance, symptoms and cures.
Methods: A self-administered survey was conducted among the secondary school students (9-12 grades) of a private school for this purpose.
Results: A total of 160 students were approached from which 158 (98%) agreed to take part in the survey. Overall 98% students claimed to know something about Hepatitis B. But only 52% of all had comprehensive and correct knowledge about symptoms, causes and measures for prevention of Hepatitis B. Their major sources of knowledge were parents (57%) and television (56%) followed by newspapers and books (31%), doctors (30%) teachers and peers (29%).
Conclusion: Only half of the adolescents had correct knowledge about Hepatitis B, which infers that an average person\'s level of knowledge would have many misperceptions and myths. Television and parents are the most influential sources of imparting health education to adolescents. Thus it is imperative that these sources of knowledge strengthened to provide correct information to adolescents (JPMA 60:1072; 2010).

Hepatitis B is a blood-borne infectious disease involving the liver and caused by Hepatitis B Virus (HBV). The disease is posing a global threat and has engrossed about a third of the world\'s population, preying more than two billion people world wide including more then 350 million who have chronic lifelong infections. An estimated 600,000 persons die each year due to the acute or chronic consequences of Hepatitis B Virus.1
Pakistan, a developing country with weak political-economic structure has poor health indicators.2 In Pakistan, the estimated prevalence rate of Hepatitis B is 3-4%.3 The most common cause of spread of Hepatitis B in Pakistan perhaps, is through the use of unsterilized syringes.4 Though the government is actively disseminating health education through print and electronic media; and conducting out reach vaccination programmes through projects like National Programme for Prevention and Control of Hepatitis (2005-10),3 still the knowledge level for Hepatitis B and its modes of transmission is quite low among common person in general and adolescents in particular.5
Quite a number of people in Pakistan cannot differentiate between various types of Hepatitis and their causes. They have misconceptions and myths regarding the disease, its modes of transmission (shaking hands or touching the infected person), and symptoms.6 A similar study conducted in Singapore reports a number of respondents misperceive that HBV infection could be transmitted by sharing food, shaking hands or consuming sea food.7
Unfortunately the curriculum of schools and colleges here, do not help in eliminating myths regarding diseases like Hepatitis B nor do the school authorities lay much stress on health promotion and health education. Therefore, the major responsibility to educate adolescents in health lies with parents; and avenues such as print and electronic media, health care providers, teachers and peers remain unexplored.
Mass media is now frequently used for health education as it is largely influential and accessible, and plays an important role in changing attitudes and behaviour of the people. It has been observed that young people perceive commercials and media as the most reliable sources of health information.8
With the growing number of Hepatitis patients in Pakistan it has become vital to develop further understanding of this issue among adolescents and educate them about this disease, as they will be responsible for the health and wellbeing of their families. The in-school adolescents can at least be easily accessed for raising awareness regarding health issues. This survey was conducted primarily to assess the knowledge of secondary level students regarding Hepatitis B; its various types, importance, symptoms and cures.

This was a descriptive study; sample size was calculated by considering the expected frequency of 65% (with ± 10% difference in some knowledge about Hepatitis B) having 99% confidence level by Epi-Info (WHO version 3.3.2.) Ninth to twelfth grade students from a private school in Islamabad were included in the study having inclusion criteria of ages between 14-19 years. The students belonged to upper-middle social strata and came from educated family backgrounds.
A structured questionnaire was developed which best suited the target population. Each question had a list of possible answers along with 2-3 incorrect answers and students were asked to mark the best answer or respond to a number of options. The questionnaire included basic demographic information and questions related to knowledge about Hepatitis B, its types, severity, symptoms, causes and prevention measures. The students were also asked about their vaccination status regarding Hepatitis B and whether they would like to get vaccinated.
The data was coded and analyzed using SPSS software version 12. Standard statistical comparison tests (chi square) was applied as needed especially in drawing any association with age, sex and grade with various variables.

Table illustrates further the distribution of sources of knowledge about Hepatitis B according to age, grade, sex and vaccination status. (Here N indicates total count of each category while n indicates total count of each category according to each source of knowledge followed by its percentage within each group in brackets.) Thus, the most common source of information for girls (66%) was their parents while that of boys (58%) it was television. Students of grade 11-12 (63%) were more influenced by parents while grade 9-10 (57%) students were more influenced by television. Similarly, students who stated parents as their major source of knowledge had higher hepatitis vaccination percentage (62%, p = 0.025) than students who stated other sources of knowledge (TV, print media, teachers and peers, doctors). In addition, parents were perceived to be one of the major sources of knowledge by higher grade students (11-12 grades), females and those who had been vaccinated against Hepatitis B.
Students were also asked to mark the common symptoms of Hepatitis B. Their most frequent responses were: yellow eyes (49%) and weight loss (39%) while some students also marked fever (30%) as possible symptom of Hepatitis B. Against these perceived common symptoms of Hepatitis B (i.e. yellow eyes, weight loss, fever) students responses according to sources of information were parents (59%, 62%, 62%), television (56%, 62%, 62%), news papers and books (32%,37%,39%), teachers and peers (34%,35%,33%) and doctors (34%,33%,43%) respectively. Here again the role of parents and television in offering knowledge regarding Hepatitis B can be clearly seen as influential.
The most frequent responses recorded from students (as marked from a given list) regarding the common causes of spread of Hepatitis B Virus were: blood transfusion (64%) and sharing needles (61%). However, some students also marked mosquito bite (n=22), sharing bathroom and touching clothes of infected person (n=29) as common causes of Hepatitis B. 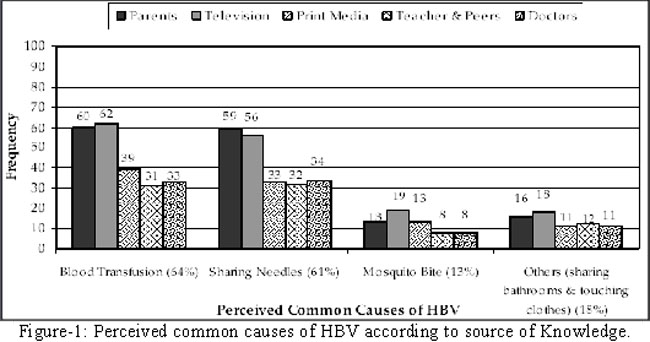 Figure-1 illustrates the perceived common causes of Hepatitis B according to source of knowledge which once again identifies the influence parents and media have on imparting knowledge to adolescents regarding Hepatitis B. Interestingly, students who marked mosquito bite (n=22) as one of the mode of transmissions of HBV also had parents (n=13), television (n=19) and print media (n=13) as their main sources of knowledge.
The most frequent responses regarding the prevention of Hepatitis B were: vaccination (86%), using sterilized instruments (45%) and using screened blood (43%). However, drinking boiled water (n=53) and eating uncontaminated food (n=60) were also identified to prevent Hepatitis B. 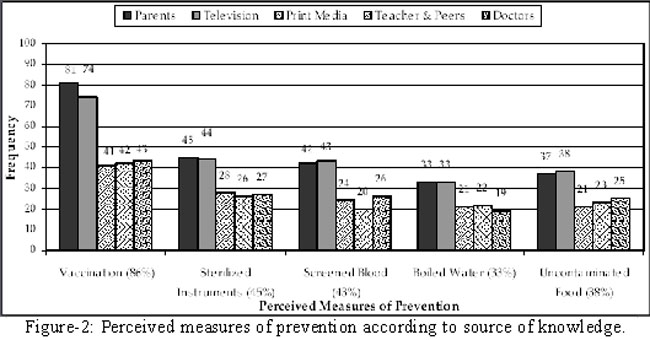 Figure-2 illustrates the perceived measures of prevention according to source of knowledge. It also depicts that parents and television are the primary source of imparting correct as well as incorrect knowledge about Hepatitis B preventive measures.

This study reveals that although adolescents may have some knowledge about Hepatitis B there are certain misperceptions about its prevalence and symptoms. Other studies which have looked at the knowledge and awareness have targeted mainly medical students which have revealed similar trends in pre-clinical years.8,9 Adolescents are highly prone to mix up the symptoms and causes of other types of Hepatitis with Hepatitis B.
There is a significant variation among students in reference to sources of knowledge. Boys were more knowledgeable than girls; where the main source of knowledge for boys was television (58%), for girls it was parents (66%). Television being the source of knowledge for males was concurred by another study in Punjab.10 The frequency in sources of knowledge remained consistent throughout the analysis; parents and television provided the bulk of knowledge to adolescents. However, it should not be assumed that either of these sources always provides correct symptoms, causes and spread of Hepatitis B.
Though the print media, peers and teachers and doctors were not common sources of knowledge for adolescents; the least incorrect knowledge was imparted by these. It is possible that multiple sources of knowledge may have a better influence on adolescents, as young adolescents from educated backgrounds tend to be influenced more from commercials, billboards, TV, movies and internet than older people
It was reported that adults rated doctors and pharmacists as most reliable and print and electronic media as the least reliable information source, whereas adolescents rated the reliability of later sources higher than the former.11 This means that though all sources of information have major potential for dissemination of health information, but they may be more attractive to some social groups (adults and adolescents) than others.
Youth are found to be most responsive to advertisements aired on the television than published in print media. It is likely that by age 18 a young person will have seen 350,000 commercials and spent more time being entertained by the electronic media than any other activity.12
All the students who were not vaccinated or were unsure about their status were willing to get vaccinated and seek further treatment if required. Most studies involving healthcare professionals and patients revealed similar trends in seeking treatment.13,14 but an age matched study of males in Punjab10 revealed that 80% would not get treatment even if they were confirmed to be Hepatitis B positive. This can be accounted for by the lack of awareness, difference in socio-economic status and education of both samples. The association between education and health seeking behaviour in Hepatitis B patients has been revealed by another study15 where poor awareness and responsibility in getting treatment was correlated with decreased education.
The social status, family background, age and sex affect the amount of health education received from various sources. But even among educated persons there is lack of responsibility and poor attitude towards the treatment of Hepatitis B.

Majority of the adolescents had heard about Hepatitis B but only half had comprehensive knowledge about it.
Television and parents are the most influential sources of knowledge and targeted interventions are required in these two areas. It is essential to scan health messages for inaccuracy, before they are subjected to the media. Parents should keep themselves updated about common diseases like Hepatitis B as they are part of the primary socialization of their children.

An optimum diagnostic test for amoebic liver abscess in endemic areas: are we there yet?