Stranded in the web of evidence and ethics

Natural Orifice Translumenal Endoscopic Surgery (NOTES) is the execution of a diagnostic or therapeutic intervention within the peritoneal cavity with flexible endoscope, which is passed through a natural orifice. NOTES earned its nomenclature and worldwide recognition following trans gastric liver biopsy in a porcine model by Kalloo et al. in 2004.1 It is generally regarded as 3rd generation surgery, which has the potential to replace current modes of surgical treatment. The technical feasibility of NOTES is proven in animals after scores of procedures through trans gastric, trans vaginal, trans colonic and trans vesical routes: cholecystectomy,2 appendectomy,3 splenectomy4 bowel resection-anastamosis,5 gastrojejunostomy6 and tubal ligation.7 These surgical landmarks have prompted NOTES enthusiasts to conduct several operations in humans: appendectomy,8 peritoneoscopy9,10 and cholecystectomy.11 There is no consensus on the best route of access to the abdominal cavity. The trans gastric approach seems to be very popular in spite of difficulty in recognition of retroflexed organs in the upper abdomen. Currently, NOTES depends on technology "borrowed" from flexible endoscopy. The endoscopic accessories are primarily meant for intra luminal use. They are not robust enough to facilitate triangulation and elevation of tissues, which are vital to resection-anastamosis during conventional and laparoscopic surgery. Flexibility of the shaft of endoscope is a major drawback within large space of the peritoneal cavity. The tip control is poor and access to the desired location within the abdomen is compromised. Viscerotomy is usually sealed with haemoclips, which appose only the mucosal lining and do not extend to the muscle layer. The aforementioned limitations have delayed the clinical application of NOTES. High grade NOTES surgery is regarded as technically demanding and risky at present. On the other hand, there is enough enthusiasm to resolve these problems by developing high resolution endoscopes and suitable accessories for transluminal surgery. Some of the examples include R scope, Cobra scope, Transport scope, Eagle claw, Shape lock, stable platform and robust graspers for holding tissues (Figure). 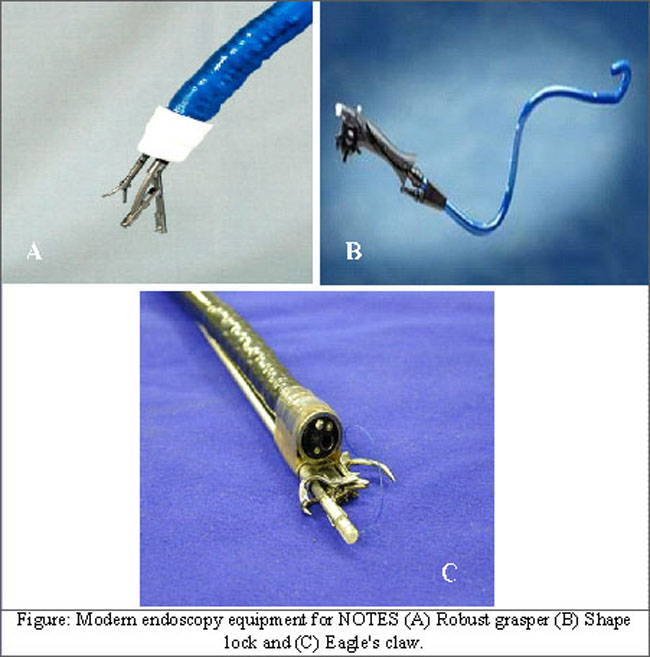 Operating in a Yellow Nation; the frequency of hepatitis B and hepatitis C positive at a tertiary care teaching hospital