Objective: To evaluate the effectiveness of endoscopic balloon sphincteroplasty as an adjunct to endoscopic sphincterotomy in removing large and difficult bile duct stones.
Methods: A prospective non-randomized descriptive study was conducted at the Endoscopic Service of Surgical Unit 4, Civil Hospital Karachi over a period of 2 years from February 2007 to January 2009. A total of 84 patients where the biliary calculus was either greater than 15mm or difficult to remove with standard techniques underwent ERCP with endoscopic sphincterotomy and balloon sphincteroplasty. Patients with diagnosis of cholangitis or pancreatitis were excluded from the study. Endoscopic balloon dilatation was performed after standard sphincterotomy by using standard 15-18mm Controlled Radial Expansion (CRE) balloons. All procedures were done as day case under conscious sedation.
Results: There were 18 (21.4%) male and 66 (78.6%) females. Age of the study population ranged from 16-85 years with a mean of 48.38 ± 17.07 years. The size of the stone ranged from 10-32mm with a mean of 14.7 ± 0.44mm. Stones were removed with sphincteroplasty in first session in 52/84 (61.9%) patients, 11/17 (64.4%) patients in the second session and 4/4 (100%) in the third session. Patients who were lost to follow up were 14(16.7%). Surgery was advised for 2 (2.4%) patients because of failure to remove stones by sphincteroplasty. Overall success of endoscopic sphincterotomy and large balloon dilatation in our study was 79.76%.
Complications were seen in seven patients (8.3%) while one (1.2%) died. Bleeding was encountered in 3 (3.6%) patients which was controlled by adrenaline injection in 2 patients while one patient died due to severe haemorrhage before any surgical intervention could be undertaken. Moderate pancreatitis necessitating admission was seen in 3 patients (3.6%). None of the patients had severe pancreatitis or perforation secondary to the procedure.
Conclusion: Large balloon dilatation along with endoscopic sphincterotomy is a simple, safe and effective technique in removing large bile duct stones, in patients with distal common bile duct narrowing or in whom the size of stone is greater than the size of common bile duct with a complication rate if not less equal to that of endoscopic sphincterotomy alone (JPMA 60:1039; 2010).

A prospective non-randomized descriptive study was conducted at the Endoscopic suite of Surgical Unit 4, Civil Hospital Karachi over a period of 2 years from February 2007 to January 2009 after permission taken from the hospital ethical committee. A total of 84 patients with diagnosis of choledocholithiasis underwent ERCP with balloon sphincteroplasty. These were patients where the biliary calculus was either greater than 15mm or difficult to remove with standard techniques. Patients with diagnosis of cholangitis or pancreatitis were excluded from the study. A proforma was filled for all the patients involved in the study. Prerequisite for the ERCP was a haemoglobin of >8g/dl and an INR <1.5. Each patient received ciprofloxacin 500mg prophylaxis and procedure was done under intravenous sedation using midazolam 5-10mg and nalbuphine 10mg with some patients receiving atropine in 0.1mg increments for excessive peristalsis.
ERCP was done using side viewing duodenoscope (TJF160VR, Olympus Corporation, Japan). Electrosurgical unit (UES-30, Olympus Corporation, Japan) was used at a setting of blended current with power setting of 35W for both cut and coagulation. After wire cannulation, an initial cholangiogram was taken. Sphincterotomy was done to its full length by extending the incision to major horizontal fold crossing the intramural portion of bile duct. In cases of failed attempt to remove stones, CRE balloon was passed over the guide wire with balloon positioned across the ampulla with its middle at the level of sphincter. Balloon was gradually filled with saline under endoscopic guidance till the required diameter was achieved. Balloon was kept inflated for 60seconds. Stones were then removed with either balloon or basket. Where stones could not be removed stent was passed and the procedure repeated after 4-6 weeks. After > 2 attempts of failed removal, patients were referred for surgery.
All procedures were carried out as day case. Post procedure patients were kept nil per oral for 2 hours and discharged after 4 hours if no complications occurred during the time. Serum amylase was sent for all patients after 12 and 48 hours. Pancreatitis was graded according to criteria by Cotton.4
Endoscopic balloon dilatation was performed by using standard CRE (Boston Scientific, USA) balloon. Size of the balloon ranged from 15-18mm depending on the size of stone. Statistical data was analyzed using Statistical programme of social sciences (SPSS. Ver. 11). 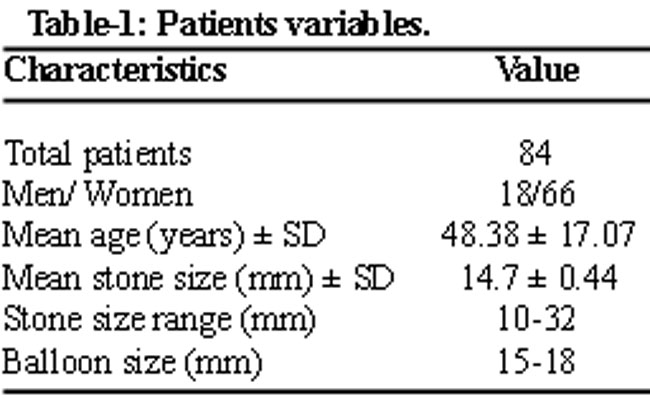 The maximum pre procedure bilirubin was 24.40mg/dl but the mean was 6.04±5.20 mg/dl. Mean alkaline phosphatase levels was 775.99U/L ±736.23. Stones were removed with sphincteroplasty in first session in 52/84 (61.9%) patients, out of remaining 32 patients, 14(16.7%) were lost to follow up, who were subsequently excluded from final results as they were not available for second or third sessions. One patient died due to excessive haemorrhage after first session before any surgical intervention could be undertaken. Patients with complete stone clearance in the second session were 11/17 (64.7%). Surgery was advised for 2 (2.4%) patients because of failure to remove stones by sphincteroplasty after second session and four patients had stone clearance (4/4 100%) in the third session (Table-2). 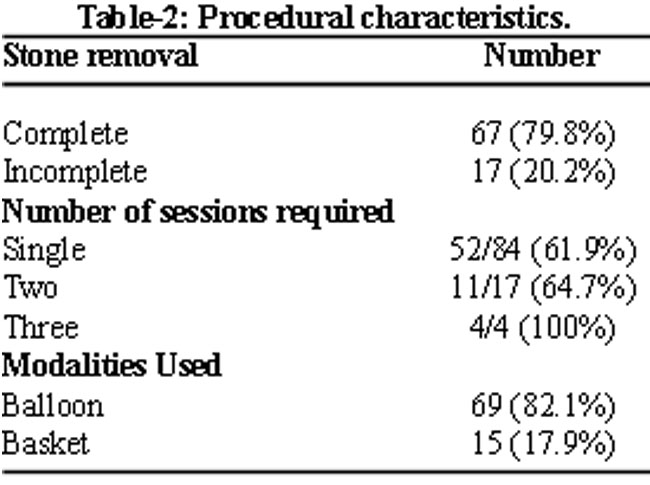 Reason for failure of sphincteroplasty in first session was large stone >20mm in 5(6%), impacted stones in 11(13.1%) and bleeding in 1(2%). The modalities used to remove stones in patients included balloon in 69(82.1%) and basket in 15(17.9%). Overall success of endoscopic sphincterotomy and large balloon dilatation in our study was 79.76%.
Complications were seen in seven patients (8.3%) with mortality in one (1.2%) patient. Bleeding was encountered in 3 (3.6%) patients which was controlled by adrenaline injection in 2 patients while one patient died due to severe haemorrhage. Moderate pancreatitis necessitating admission was seen in 3 (3.6%) patients. None of the patients had severe pancreatitis or perforation secondary to the procedure (Table-3). 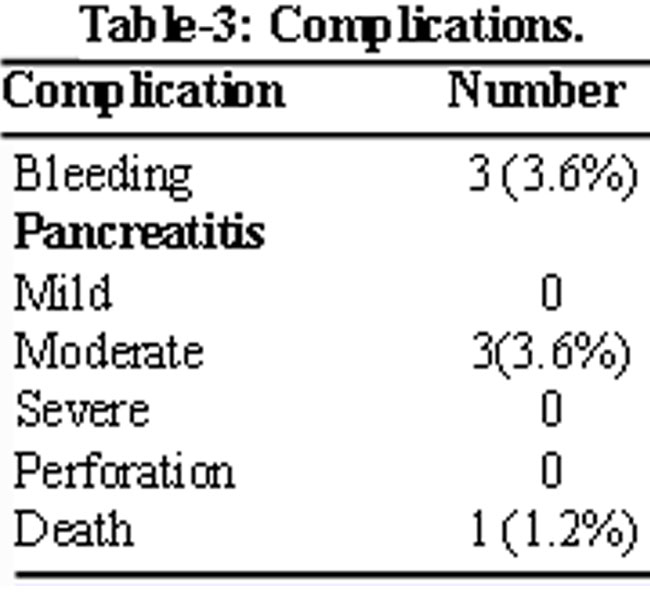 Endoscopic papillary balloon dilatation (EPBD) was first described by Staritz et al11 in 1983. It was only in the mid nineties that Mac Mathuna et al12 reestablished it as a sphincter preserving alternate to sphincterotomy in treatment of bile duct stone. Subsequent studies have shown good results with EPBD.5,6,13,14 Thus EPBD is effective in patients with small to moderate size bile duct stones but difficulties are encountered in removal of larger stones because the biliary opening is enlarged to a lesser extent as compared with EST.15-17 In this context Hoe18 introduced a combined method of EST and LBD to overcome the limitation of traditional balloon dilatation. Using balloon size 12-20mm diameter results in a larger opening then EST alone would be able to create. The risk of pancreatitis was also low in the combined method.
Ersoz et al9 in 2003 combined EST with dilatation with large diameter 12-20mm balloons and reported that stones not removed via standard methods and EPBD could be removed with the combination of two techniques. They reported an overall clearance rate of 93% and a complication rate of 15.5%. the results were better in group having large stone with no tapered distal CBD i.e. 95% success rate and 3.3% complications as compared to 89% and 33% in the group with tapered CBD. In our study we had also combined endoscopic sphincterotomy and large balloon dilatation. Our first session success rate was 61.9% and overall stone clearance rate was 79.76%. This overall success rate may show bias as most of the patients in the second session were lost to follow up. If we were to exclude patients lost to follow up in the second session then the success rate of stone clearance rises to 67/70 (95.7%) which is similar to previous results regarding overall stone clearance.9,19
The number of sessions required to clear the bile duct of stones increases with the number of stones and size of stones.20 In our study 32 (38.1%) patients had incomplete removal of stones in first session. Out of these 14(16.7%) were lost to follow up and 1(1.2%) died due to excessive bleeding as a result of sphincteroplasty. In the second session there were 17 patients out of which 11 had their stones cleared while 2 patients were referred for surgery as the stones were impacted with tapering of the distal CBD. All 4 patients in the third session had their stones cleared. Literature search reveals that the major impediment to the successful removal of biliary stones is large size >15mm, barrel shaped stones, stricture or tapering of distal CBD.15-17
The incidence of pancreatitis in published studies varies from 0-3% for ES and LBD.18 In this study none of the patients had severe pancreatitis. Moderate pancreatitis was seen in 3.6%. The low incidence of severe pancreatitis could be because of the combination of EPBD and ES as this enables the dilatation to proceed towards the incision rather than circumferential fashion.16,20-23 None of the patients in this study had perforation. These findings were in line with results published by Heo et al.18
A study published in gastrointestinal endoscopy in 200824 has given outcome of this procedure from five ERCP referral centers in US. The study has documented two deaths from severe bleeding and perforation, which accounted for mortality rate of 0.25% in 789 patients. The mortality rate in our study was 1.2%, a figure much higher than the reported incidence in the literature, most probably due to small sample size in our study.
Bleeding was seen in 3.6% (n=3) patients. In two patients this was controlled by adrenaline injection while one patient succumbed to fatal haemorrhage before any surgical intervention could be undertaken. Review data has established the risk of bleeding in 2-5% patients with EST and with no significant bleeding with ESBD.14,20 One study from Turkey had cited bleeding rate of 9% with EST/EPBD establishing bleeding as a potential complication in patients with tapered distal CBD.15