Objective: To explore the association between Self Monitoring of Blood Glucose (SMBG) levels and improved glycemic control (HbA1c level) among type 2 diabetic patients, receiving oral hypoglycaemic agents and insulin, and to ascertain the factors influencing SMBG.
Method: Using Comparative cross sectional study design five hundred Type 2 diabetes patients through convenient sampling between 30-70 years were interviewed through a structured questionnaire in year 2006 and 2007 at AKUH Ambulatory setting. These 500 subjects were divided as 250 in case (doing SMBG) and 250 in control (not doing SMBG) groups.
Results: We identified that HbAIc value was maintained at good and fair levels in case (56%) as compared to controls (p=0.002). There was a high association of SMBG with education level, as graduate and above were monitoring SMBG at high level as evident by (p=0.005). Furthermore, there was a high association of SMBG with duration of diabetes as subjects having diabetics more than 5 years were monitoring their blood glucose level at frequent intervals (p=0.001). In case, 96.8% subjects had knowledge about the target of fasting and random blood glucose in comparison to 91.6% subjects in controls. The frequency of blood sugar checking varied among all subjects in case group such as 55% checked their blood sugar occasionally, 26% monitored daily, and 13% twice a day and 3% checked their blood sugar before and after each meal.
Conclusion: Self-monitoring of blood glucose levels was associated with clinically and statistically better glycaemic control regardless of diabetes type or therapy. Therefore, healthcare personnel must increase awareness on the importance of SMBG and strongly promote this practice among diabetic patients (JPMA 60:1035; 2010).

Diabetes is emerging as a disease of epidemic magnitude, nationally and globally, with regard to its prevalence, complications, and costs.1 Morbidity and mortality resulting from diabetes is a major health problem in Asia and there will be a substantial increase in the number of individuals presenting with diabetes-associated micro- and macro vascular complications. Around, 190 million people worldwide have diabetes today and over 330 million predicted have diabetes by 2025.2
According to Asian diabetes association report3 in Pakistan, there were 5.2 million people with diabetes and is it predicted that 13.9 million people, will have diabetes by 2030. The occurrence of diabetes complications is high in Pakistani diabetic population, 33.3% suffer from retinopathy4 and 40 percent from nerve disease.1,5 Therefore Self Monitoring of Blood Glucose (SMBG) for patients with type 2 diabetes treated with oral agents and insulin, helps to detect asymptomatic hypoglycaemia and hyperglycaemia and guides patient for managing glycaemic control.
SMBG enables tighter blood glucose control and decreases the long-term risks of diabetic complications.1,6,7 Another, study in United States found that improved glycaemic control benefits patients with type 1 or type 2 diabetes. In general, every percentage point drop in HbA1C from 8 to 7 percent reduces the risk of microvascular complication of eye, kidney and nerve diseases by 40%. Therefore, American Diabetes Association has set the goal for HbAIc below 7%.8
Our tertiary care university 660 bedded hospital is an acute care hospital in Karachi, Pakistan, where every day approximately 200 to 300 patients visit with type 2 diabetes in ambulatory clinic for diagnosis and treatment of diabetes.
Self-monitoring of blood glucose is widely recommended as a component of diabetes management, but there is a substantial controversy about this costly practice, especially for patients with type 2 diabetes. However, The American Diabetes Association\'s Clinical Practice Recommendations9 suggest monitoring at least daily for patients with type 2 diabetes. American Diabetes Association (ADA), European Diabetes Policy Group, Canadian Diabetes Association (CDA), American Association of Clinical Endocrinologists, Latin American Diabetes Association and the Asian-Pacific Type 2 Diabetes Policy Group, recommend targets for HbA1c < 6.0% in patients with type 2 diabetes. This target helps to reduce the risk of micro- and macro vascular complications which accounts for at least two-third of all complications of type 2 diabetes.8,10-12 UKPDS13 data indicated that every 1% drop in HbA1c is associated with a significant reduction in risk of 21% for any diabetes related endpoint, 21% for deaths related to diabetes, 14% for myocardial infarction and 37% for micro vascular complications.6,14
This study is conducted first time in our health care setting to evaluate the association between Self Monitoring of Blood Glucose (SMBG) levels and improved glycaemic control (HbA1c level) among type 2 diabetic patients, receiving oral hypoglycaemic agents and insulin and to ascertain the factors influencing SMBG.

A comparative cross sectional study was conducted on a case group doing self monitoring of blood glucose and control group not doing self monitoring of blood glucose. Five hundred patients, 250 in each group between ages of 30-70 years with diagnosis of type 2 diabetes were conveniently recruited from the outpatient diabetes clinic at tertiary care hospital Karachi, Pakistan during the period 2006 and 2007. Since convenience sampling was employed; therefore, no sample size calculation was required. Hence, 500 sample size was sufficient for non-probability sampling methodology.
Permission was obtained from Ethical Review Committee of the hospital and a written informed consent from the study subjects. The confidentiality of data was maintained by assigning special codes to each study subjects.
Exclusion criteria were secondary diabetes, major illness within one year, chronic kidney disease, chronic liver disease, and alcohol misuse. A structured questionnaire was used to collect the data by an assigned diabetic nurse from both groups. Questionnaire was further completed by reviewing patients\' medical records laboratory profiles and demographic data of all subjects. SMBG monitors in case group were asked to maintain their record on SMBG sheet and were advised to present to the assigned diabetic nurse at each clinic visit in order to review and record their HbA1c levels for data collection.
Diabetes was defined as a chronic disease that occurs when the pancreas does not produce enough insulin, or when the body cannot effectively use the insulin. Hyperglycaemia is a common effect of uncontrolled diabetes and over time leads to serious damage to many of the body\'s systems, especially the nerves and blood vessels.15
The goal for patiens in general is <7.0% (referenced to a non diabetic range of 4.0-6.0% using DCCT-based assay. Goal for the individual patient is as close to normal (<6.0%) as possible without significant hypoglycaemia (Asian Diabetes Association (2009).3
Data were initially analyzed descriptively using SPSS (ver 15.0) and results presented as the percentage for qualitative variables and chi-square test was employed to detect the significant difference between categorical variables. All p-values were two sided and considered as statistically significant if < 0.05. 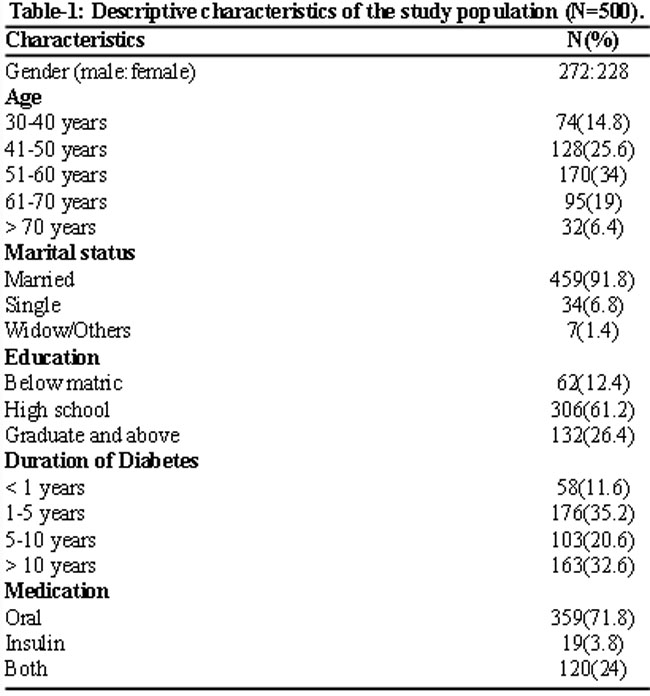 It was noted that 359 (71.8%) were on Oral hypoglycaemic agents and the duration of diabetes >10 years were 163(32.6%). Overall, complications of Diabetes were 284 (56.8%). The most predominant were Hypertension 190 (66.9%) followed by Ischaemic heart disease 31(10.9%). Altogether, 100% of subjects in case group were doing self monitoring of blood glucose, however, the frequency of blood sugar checking varied such as 55% checked their blood sugar occasionally, 26% monitored daily, and 13% twice a day and 3% each checked their blood sugar before and after each meal, Table-2. 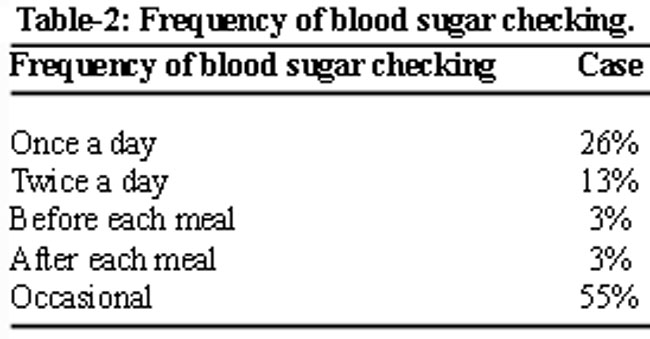 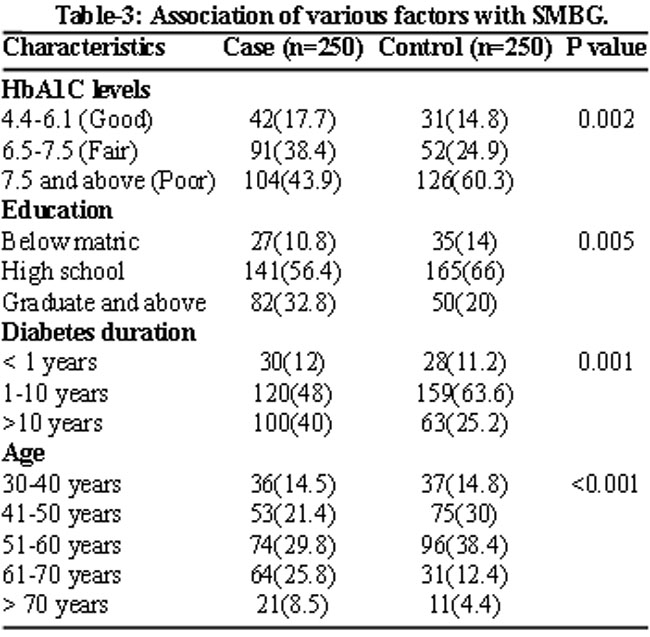 HbAIc value of 4.4-6.1 is considered good and 6.2-7.5 is considered fair. We identified that HbAIc value was high in case group as compare to control group (p=0.002), 56% subjects in case group had HbAIc at good and fair level. There is a significant association between HbA1c (glycemic control) in patients with type 2 diabetes who were doing SMBG were able to maintain good glycemic control (p=0.001). Furthermore, knowledge of self-monitoring glucose was significantly high in case group that is 59% in comparison to control 41%. In case, 96.8% subjects had knowledge about the target of fasting and random in comparison to 91.6% subjects in control.
A total of 56% subjects in case group checked sugar level by gluco meter and made appropriate management accordingly, whereas 41% subjects of case group and 92% subjects in control were not using gluco meter to check their sugar level and were managing themselves based on occurrences of symptoms and 10% subjects in both groups were not doing anything. In case 96.8% subjects had knowledge about the target level of fasting and random as compare to control only 29%.

Our study identified that self-glucose monitoring improves glycaemic control as all subjects in case group were using SMBG and 53% subjects had HbAIc at good and fair level. This finding does support previous research that self-monitoring of blood glucose concentration is associated with improved glycaemic control, which prevents complications resulting from diabetes.7,10,12,16-18 These findings will help the Pakistani population to understand that complications of diabetes can be prevented and financial burden reduced via SMBG monitoring which can maintain HbAIc at a good level. The association between self-monitoring and glycaemic control may strengthen the ability to teach self-management skills, instill greater awareness of their importance, motivate patients to make behavioural changes in response to readings, and enhance their self-confidence. For example, well-informed patients readily modify insulin dose and timing in response to home glucose readings, and improved insulin administration is the best way to improve glycaemic control.19
The majority of study subjects were from middle age group, indicating that in Pakistan this age group faces more challenges as socioeconomic burden, family problems, political and economical uncertainties, that are a further risk to diabetes. In developing countries, diabetes occurs at younger age, leading to complications of the disease during the most productive years of life and is a severe economic and social burden among the Pakistani population.8 Pakistan is a South-Asian country with a population of approximately 150 million, 12% of people above 25 years of age in Pakistan suffer from diabetes type-2.20
The study findings revealed that population of males was higher in both study groups. In Pakistan the bread earner are men. The 1990-1991 Pakistan Integrated Household Survey indicated that the female labour force participation rate was 45% in rural areas and 17% in urban areas. According to the 1999 report by the Human Rights Commission of Pakistan, only two percent of Pakistani women participate in the formal sector of employment. The lower participation of female gender in the study could be; either due to less stresses on females resulting in less exposure to disease or may be lack of affordability to seek assistance for health when required.
Knowledge of self-monitoring glucose was significantly high in case group than in the control group as 96.8%, subjects had knowledge about the target of fasting and random blood glucose in comparison to 91.6% subjects in control. There was a significant association in achieving safe level of HBAIC level with knowledge, indicating that knowledge makes a difference in approach towards health and symptoms management and increases insight to seek immediate health assistance when required. Diabetes education has become an integral part of diabetes treatment in many countries and self-management training had a significantly higher medium-term efficacy than other education.21
The findings of this study recommend that self-glucose monitoring is important  but it also indicates that majority of subjects were checking their blood sugar occasionally. It was also observed that participants performing SMBG, were managing their diabetes well. The frequency of monitoring blood glucose by a glucometer should be emphasized by the diabetes educator. As the patients visiting the clinic are multilingual, the educator has to teach them accordingly, keep a strict follow up serially and provide continuous reinforcement for compliance for monitoring and record keeping.
Self monitoring contributes to diabetes management in two ways. Firstly, it improves glycaemic control by reinforcing self management behaviours and compliance with the medication. Secondly, the process of monitoring and immediate feedback on glycaemic control affects patients\' experience and determines positive attitudes to their diabetes management and satisfaction with treatment.
The study findings cannot be generalized as the main limitation was that only private patients from a high and middle income strata were included in the study. The other limitation was the convenience sampling lead to generalization of study findings and third that the intra and inter examiner reliability of the data collectors was weak.

There was a significant association of self monitoring of blood with glycaemic control. We conclude that self-monitoring of glucose play a vital role in self-management of diabetes and prevents complications. Furthermore, it allows patients to manage their diabetes at home without recurrent hospitalization and promotes a cost effective and healthy life style.