Brucellosis in a high risk occupational group: seroprevalence and analysis of risk factors

Objectives: To estimate Brucella seropositivity among slaughterhouse workers of Lahore district and to elucidate risk factors associated with seropositivity to Brucella.
Method: During the year 2008, a cross-sectional study was conducted in four slaughterhouses of Lahore district. A sample of 360 workers was selected from these slaughterhouses through stratified random sampling on proportional basis. Workers were interviewed using a structured questionnaire to obtain risk factor information and their blood samples were collected to be screened for the presence of anti-Brucella IgG using Enzyme Linked Immunosorbent Assay (ELISA) technique. Data management and analysis were performed using SPSS (statistical package for social sciences) version 16. Risk factors associated with seropositivity to anti-Brucella IgG were identified by constructing a logistic regression model.
Results: Of the 360 serum samples tested, 21.7% (95% CI 17.44% - 25.96%) were positive by ELISA test. The logistic regression model identified age (OR 0.96, 95% CI 0.94-0.99), assistance in parturition of animal (OR 0.47, 95% CI 0.23-0.96), consuming raw milk (OR 2.25, 95% CI 1.04-4.87) and handling sheep (OR 0.30, 95% CI 0.09- 0.92) as risk factors for Brucella seropositivity among slaughterhouse workers of Lahore district.
Conclusion: To reduce the burden of brucellosis, a national brucellosis control programme should be initiated with special emphasis on the high risk population of slaughterhouse workers (JPMA 60:1031; 2010).

Brucellosis is a re-emerging infectious disease, which is a major health concern worldwide.1 It has a variable trend in the USA and the European countries but has a predominant presence in Central Asia and the developing countries.2 This classical bacterial zoonosis; is caused by the bacteria of the genus Brucella. The Brucella species are pathogenic to humans and their usual animal reservoir include B. melitensis in sheep and goats, B. abortus in cattle, B. suis in pigs, and B. canis in dogs.3 Of these B. melitensis causes the severest form of disease in humans.4
The disease is primarily a disease of animals in which man is an accidental host.3 The occupational source of exposure predisposes the farmers, shepherds, butchers, laboratory workers, veterinarians and slaughterhouse workers to a greater risk of contracting the disease through inhalation of contaminated aerosols, contact with conjunctival mucosa, or entry of the bacteria through cuts and abrasions in the skin as a result of contact with infected animals or their products.5,6 The non-occupational sources of exposure include ingestion of infected meat, unpasteurized milk and milk products.5 In addition to the food-borne and occupational infection, it is linked to travel and bioterrorism, Brucella is considered a biological weapon in the category B pathogen.7 Recently other routes of transmission have been identified like: infection through breast milk,8 having an infected household member,9,10 through sexual transmission,11 through exchange blood transfusion,12 and the infection contracted by an obstetrician during the delivery of a transplacentally infected baby.11
Brucellosis is a neglected disease in Pakistan, where few studies have been carried out to estimate its prevalence. A full description of the epidemiology of the disease is needed for planning interventional strategies for its prevention and control. This study was carried out to estimate Brucella seropositivity among slaughterhouse workers of Lahore district and to elucidate risk factors associated with seropositivity to Brucella.

This cross sectional study was carried out to determine the seropositivity of brucellosis among slaughterhouse workers of Lahore district as well as to find out association of various factors to Brucella seropositivity. Our sample consisted of slaughterhouse workers employed in four slaughterhouses of Lahore district. A sample size of 360 workers, calculated using Epi-Info version 3.3.2 was drawn using stratified random sampling on proportional basis.
The study was approved by the Ethical Committee of the Institute of Public Health, Lahore. Before data collection, permission from the four slaughterhouse authorities was sought. Fully informed, understood and voluntary written consents of the sample members were obtained. Confidentiality of the data was ensured.
After obtaining informed consent from all study participants, person-to-person interviews were conducted. To ensure quality all the interviews were carried out by the principal investigator. Data on demographic and socioeconomic variables and on exposure to animals and animal products was collected by using a structured questionnaire. The questionnaire was pre-tested in a slaughterhouse in Sheikhupura and necessary changes were made before adoption of the final version. During the interviews, blood samples were taken from the slaughterhouse workers by a trained phlebotomist. The samples were appropriately labelled and transported to the laboratory for analysis to detect anti-Brucella IgG using the Enzyme Linked Immunosorbent Assay (ELISA) technique.
Data was analysed using Statistical Package for Social Sciences (SPSS) version 16.0. The logistic regression model was used to study the association between exposure variables and seroprevalence of brucellosis and to find out which factor(s) best predicted the likelihood of Brucella seropositivity. The association of a particular variable was expressed as odds ratio (OR) with a 95% confidence interval (CI). A two-tailed P value of .05 or less was considered statistically significant. 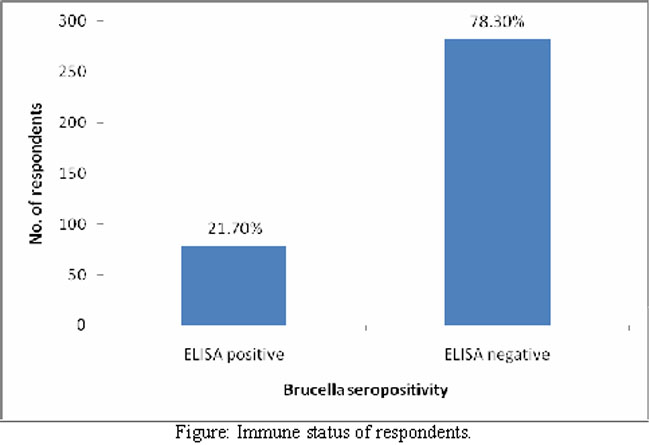 Socio-demographic characteristics of the respondents by seropositivity are described in Table-1. 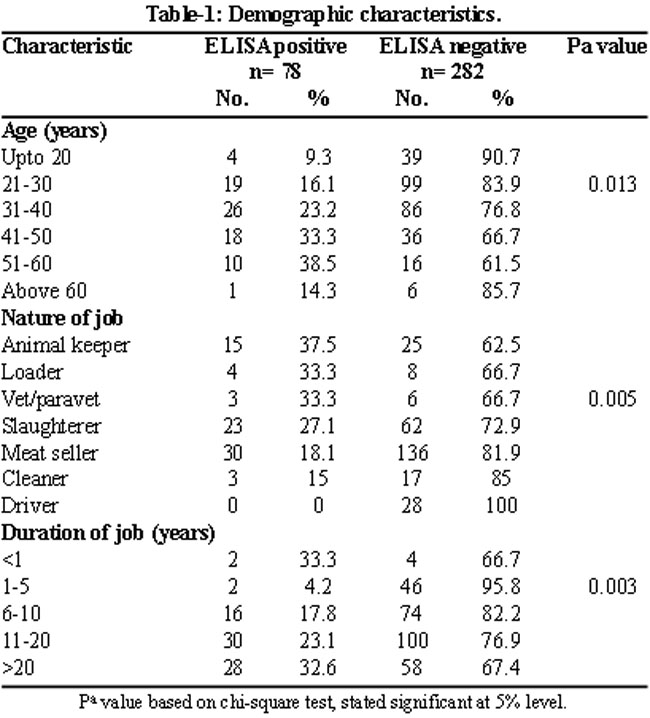 Those with Brucella seropositivity (n=78) were distributed by educational status as follows: illiterate 59%, primary level of education 25.6%, matriculation 12.8% and graduate and above 2.6%. Majority (62.8%) of the seropositives resided in urban localities as compared to those living in rural areas (37.2%).
The association between seropositives and some risk factors was analysed using the logistic regression model as is shown in Table-2. 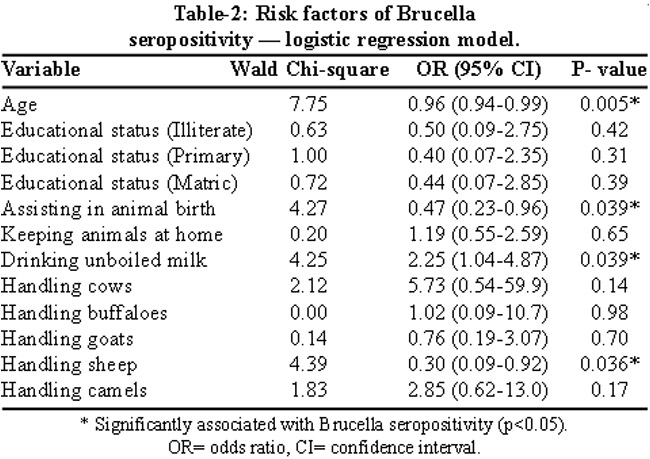 Brucellosis is one of the most common zoonotic diseases in the world. It has emerged as a major public health concern worldwide with implications for the economic prosperity of many nations.2 The general public can be infected by the ingestion of contaminated milk and milk products, but certain occupations are considered carrying high risk such as abattoir workers, veterinarians, butchers, meat inspectors and farmers.13
The seroprevalence of brucellosis in the slaughterhouse workers was estimated by the detection of anti- Brucella IgG in the serum samples of slaughterhouse workers. The seroprevalence determined by employing the ELISA technique was found to be 21.7%. In Pakistan the only other study conducted on slaughterhouse workers was by Masoumi et al in 1992. They found a seroprevalence of 8.33%.14 Comparable findings have been reported from studies in India (25.45%),15 Saudi Arabia (35%),16 Brazil (4.1%),17 and in Algeria it was found to be 37.6% in abattoir workers, butchers, breeders and veterinarians.18
The slaughterhouse workers are generally more prone to contract brucellosis by virtue of their direct exposure to viscera, gravid uterus and fetal membranes of infected animals (the preferred sites of localization of the bacteria).17,15 Individuals working in slaughterhouses also show a higher sero-prevalence as compared to general public or other occupational groups.19 The abattoir workers, owing to their occupation, are not only in contact with carcasses and viscera of infected animals but also get infected through cuts on bare hands, splashing of infected fluid in the conjunctiva and inhalation of aerosols in the slaughtering area.16,20 The minimum infective dose of Brucella species required to induce active brucellosis is less through the respiratory route than the oral route, increasing the vulnerability of the slaughterhouse workers.19
Based on the logistic regression analysis; age of workers, assistance in parturition of animal, consuming raw milk and handling sheep were identified as the risk factors associated with Brucella seropositivity. In this study, all the respondents were males, and those between the age group of 51-60 years had the maximum seropositivity. A direct relationship was observed between the workers age groups and their immune status in the present study. Similar findings have been reported by the study of Abo-Shehada et al.21 As brucellosis is an occupational disease, individuals in this age category would be expected to be at a greater risk because of prolonged exposure.
In our study there was a statistically significant difference between those who assisted in parturition and those who did not assist as far as the seropositivity of the respondents was concerned. Mishal J et al have also highlighted the risk of Brucella seropositivity with assistance in parturition of animals. In their study, conducted in Israel, brucellosis was found to be more common among individuals who had been involved in calf deliveries and had handled placentae.22 Lim et al reported contact with infected animals\' placentae as the route of transmission of the disease.23 In agreement with our finding, a significant association between brucellosis and the ingestion of unpasteurized milk was also reported by Husseini et al.24 Similarly, Daniela has also reported the habitual intake of raw milk as the probable cause of brucellosis.20
Although a specific test for the identification of Brucella species causing the infection was not carried out in this particular study it is known from literature review that, B. melitensis, which primarily infects small ruminants, is highly pathogenic and causes acute disease in contrast to B. abortus, the primary etiological agent of brucellosis in large ruminants.25 In a study by Aqad et al, 94.45% of Brucella cases were due to B. melitensis whereas only 3.7% were due to B. abortus.18 Moreover, infective dose through the oral route for B. melitensis is much smaller (5000 organisms), as opposed to B. abortus (106 organisms).19 This probably explains the significant association found between Brucella seropositivity and handling of sheep as compared to handling of other animals in the present study.
The study concludes that brucellosis is a disease of public health importance, with a high seroprevalence among the slaughterhouse workers of Lahore district. It presents with non specific symptoms such as fever, night sweats, anorexia, myalgia, weight loss, and arthralgia. Brucellosis is a multisystem disease with a propensity for chronicity. Majority of the infected individuals may develop skeletal, gastrointestinal and haematologic complications, whereas a few may develop the more serious ones i.e. meningitis, endocarditis and osteomyelitis.3 The workers should use personal protective devices to protect themselves from infection and an educational program should be launched for the slaughterhouse workers regarding modes of prevention from brucellosis. In addition, effective working guidelines for the slaughterhouses must be developed.
In order to reduce the burden of brucellosis, a national brucellosis control programme should be initiated as in Egypt and Palestine. In Egypt two approaches are used. One is to test the animals and then slaughter the infected ones having positive serologic tests; while the other approach is vaccination of the animal population.26 Whereas, the Palestinian brucellosis control programme includes mass vaccination of all flocks and strengthening of their public and private institutional, human and physical capacity for controlling and monitoring the disease.27 Prevention of human brucellosis depends a great deal on control of the disease in domestic livestock.