Asthma is the most frequent chronic disease in childhood characterized by recurrent cough and wheeze. Both the prevalence and mortality from asthma have increased during the last four decades.1
Asthma is a complex disorder involving autonomic, immunologic, infectious, endocrine and psychological factors in varying degrees in different individuals.2 The precise nature of abnormalities, which lead to airway narrowing, is unclear. Both environmental and hereditary factors are important in the pathogenesis of asthma.3 Airways are exposed to high level of environmental oxidants, yet they also have enriched extracellular antioxidants. Airways diseases such as asthma have evidence of increased oxidative stress,4 suggesting that reactive oxygen and nitrogen species may overwhelm the lung from increased oxidative stress.5
Oxidative stress can have many effects on airway function, including airway smooth muscle contraction, induction of airway hyperresponsiveness, mucous hypersecretion, epithelial shedding and vascular exudation. Further more, Reactive Oxygen Species (ROS) can induce cytokine and chemokine production through induction of oxidative stress sensitive transcription on nuclear factor-in bronchial epithelial cells and involves the uptake of oxygen and subsequent release of ROS into surrounding cells. The mechanism by which oxygen radicals cause asthma pathology is oxidation or nitration of proteins, lipids, or DNA to cause dysfunction of these molecules. In addition, physiological antioxidant system, which is equipped to protect host from detrimental oxidants, is impaired in asthma, possibly because of inflammation. Thus, the imbalance between oxidant and antioxidant that is called oxidant stress is critical in asthma pathogenesis.5 Malondialdehyde (MDA), is a marker of lipid peroxidation, it has a strong correlation with atopic asthmatic children suggesting that oxidative stress occurs simultaneously on lipid peroxidation.6
Fortunately, the body has its own arsenal of defenders, including enzyme systems and non enzymatic molecules, which help prevent severe damage from occurring. Additionally, the body can utilize "antioxidant" molecules to minimize the damage.7
Vitamin C works with vitamin E as a pair of free- radical scavengers. Vitamin C may contribute to lung growth and development and reduce air way hyper-reactivity, both which are determinants of child hood and adult lung function.8 Vitamin C provides antioxidation in the extracellular respiratory lining fluid that protects proteases, anti protease, epithelial, and immune cell from oxidant attack, and low level may leave lung relatively unprotected from oxidant stress.9 While vitamin E intake is associated with a reduced incidence of asthma, and combination of antioxidant supplement including vitamin E are effective in reducing ozone induced bronchoconstriction.10 Alteration in the level of uric acid as antioxidant is also observed in asthma.11 Accordingly, oxidative stress due to inflammations and low level of dietary antioxidant has been implicated with the severity of asthma.9
Therefore, this preliminary study was carried out; first: to determine the level of antioxidant parameters like vitamin C, E, and uric acid in our asthmatic children and compare it with non-asthmatic apparently healthy children, second: to assess the oxidative stress in asthmatic children by estimating serum level of malondialdehyde (MDA) as an index of lipid peroxidation, and third : to look for a possible correlation between serum level of vitamin C, E, uric acid and MDA with severity of acute attacks of asthma in preschool age and school age children of both sexes. At the end we aim to shed some insight for better therapeutic interventions to improve the status of these asthmatic children.

This is a prospective study carried out over one year period (from October 2003 to September 2004). The study included children,1-12 years old who were attending Basrah Maternity and Children Hospital. They were divided into two groups. The first group consisted of 98 known asthmatic patients (57 male and 41 female) who presented to the emergency department with acute attack of asthma. For selecting the children, the emergency department was visited twice a week and all asthmatic children admitted were included. The second group comprised of 121 children (58 male and 63 female), apparently non-asthmatic, and healthy, who were consulting the out-patient department and the nearby health center for minor illnesses like abdominal pain or upper respiratory tract infection. The outpatient and the health center were visited twice weekly and during each visit, every 3rd child attending the out-patient or health center for regular blood profile check up was recruited.
Infants under one year of age were excluded because there is no certainty of diagnosis in this age group. Many patients have a transient wheeze. Asthma was diagnosed on clinical background based on history of recurrent or persistent wheezing episode with or without dyspnoea and improvement on use of B-agonist.2 The exclusion criteria for the two studied groups included a history of; renal disease, cardiac disease, malabsorption, diuretic used and the malnourished children. An informed consent was obtained from one or both parents for each child before recruitment in the study.
The following information was recorded for the asthmatic patients: name, age, sex, date of admission, family history of allergy, signs and symptoms, and the severity of the acute attack. Patients with acute asthmatic attack were classified according to the severity into three groups: Mild, Moderate and Severe. This classification of severity depends on expert panel report; guidelines for the diagnosis and management of asthma.2
Asthmatic patients included in the study had no history of receiving medications prior to their visit as this could effect the serum level (especially inhaled B-agonist and theophyllin).
Blood samples were collected by venipuncture using a sterile disposable syringe in a plain plastic tube. The blood was centrifuged; and the serum was divided into aliquots in sample tubes. However, for vitamin C estimation; 1.0 ml serum sample was treated immediately with 1.5ml of metaphosphoric acid. Centrifuged for 1 minute at 3000 rpm and the supernatant was kept in plain plastic tubes at 4?C and analyzed within 2 weeks. Vitamin C was determined by reduction of the coloured dye 2, 6 dichlorophenolindophenol from a blue to colourless form.12 Measurement of serum vitamin E concentrations was done by colorimetric techniques that have been developed for measuring total tocopherol.13 Uric acid was assayed enzymatically using a kit from BioMerieux (France). Serum Malondialdehyde (MDA) was tested within 24 hours. The thiobarbituric acid assay of Buege and Aust (1978) was used to measure the MDA concentration.14 Quality control sera from bioMerieux, France were included in each assay batch for all analyses.
Data were expressed as (mean ± SD). The comparison between two groups was performed with one way analysis of variance (ANOVA). While correlation was assist by Pearson correlation (r). P-value of less than 0.05 was considered as statistically significant.

A total of 219 children aged 1-12 years were included in this study. From these children 98 presented with an acute asthmatic attack, while the remaining 121 children were considered as control group, statistically there was no significant difference among both groups regarding age and sex (P >0.05) (Table-1). 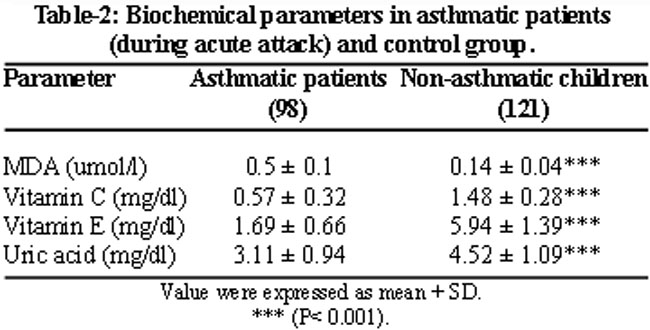 Asthma is a chronic inflammatory disease of the respiratory tract with an unknown etiology where inflammation is often associated with an increased generation of reactive oxygen species (ROS).11,15 Asthma itself may cause physiological changes in serum antioxidant status, perhaps because of increased oxidant burden associated with the disease. Numerous disturbances of antioxidant defense mechanisms have been described in asthma, as that of the epithelial lining fluid of the lung which contains high a concentration of antioxidants providing a first line of defense against inhaled and endogenously oxidant agents.16
Vitamin C as ascorbic acid is a water soluble antioxidants present physiologically in the airway and alveolar lining fluid. It\'s function is to counter both exogenous and endogenous sources of oxidation.8 This study has demonstrated a significant decrease in the serum level of vitamin C, in all asthmatic children during an acute attack as compared to non- asthmatic children. This finding was consistent with other observations.17-19 In inflammation increased generation of reactive oxygen species (ROS) was observed. Vitamin C plays a role in quenching ROS to counteract ROS effect and render them harmless.20 Ascorbate prevents lipid peroxidation through it\'s reaction with membrane a-tocopherol and reduces the concentration of tocopherol radical by regenerating its non radical form thereby restoring its scavenging activity, thus preventing lipid peroxidation. This is supported by a strong negative correlation between MDA and vitamin C in asthmatic patients with variable degree of severity of both sexes and different age groups.
Vitamin E, a fat soluble vitamin is one of the major antioxidants in cellular membrane where it acts by protecting polyunsaturated fatty acids against oxidation. In general our results showed a significant decrease in serum level of vitamin E in all asthmatic children compared with non- asthmatic children, the same finding was observed in other studies,17-19 while others showed little or no significant differences between asthmatic and non asthmatic children.21 These differences can be attributed possibly to variations in disease severity, diet, analytical techniques and body fluid being measured; however, overall an antioxidant deficiency is indicated. Children with more advanced asthma are more susceptible to the impact of oxidative stress and decreased ability of ascorbate to regenerate tocopheroxy radical and acts synergistically with vitamin E to inhibit lipid peroxidation. This was observed by the significant decrease of vitamin E serum level in severe asthmatic attack ; which is consistent with other studies.11,22
This study also revealed a significant elevation of MDA among all asthmatic children studied compared to non asthmatic children. This implies that children during acute asthmatic attack are exposed to a considerable degree of lipid peroxidation. This finding is consistent with other observation.23,24 ROS and lipid peroxidation products can influence the inflammatory response at many levels through its impact on signal transduction mechanisms, activation of redox-sensitive transcriptions factors, and chromatin regulation resulting in pro-inflammatory gene expression.
Uric acid is a powerful antioxidant act as scavenger of single oxygen radicals that was proposed to play a key role in the antioxidant protection in humans. It acts as an effective scavenger similar to ascorbic acid. The overall result for uric acid analysis in this study has shown a significant low level of serum uric acid in all asthmatic children during an acute asthmatic attack as compared with non-asthmatic children. This is similar to the findings of another study done in Nigeria on adult asthmatic patients.25 While another study has reported that urate concentration to be slightly increased in Broncho-alveolar fluid but not in serum of asthmatics patients.21
In general, asthma severity can be related to the extent of lipid peroxidation, with a positive association between MDA concentration and disease severity as reported by Bowler et al.5 The increase in reactive oxygen species (ROS) during asthmatic attack, as demonstrated by significant elevation of MDA, may overwhelm endogenous antioxidant defenses such as ascorbate, urate and alpha-tocopherol. This finding was illustrated in the present work by the low levels of these antioxidants and it is in agreement with the observations of other researchers.20,21,23-25

In conclusion, the above results revealed the existence of an increased oxidative stress and reactive oxygen species in asthmatic children, with altered antioxidant capacities. If the production of ROS was persistent, it would result in chronic inflammation and the imbalance of oxidative-reductive status in those patients.

The authors wish to thank all the subjects who participated in this study and the Basra Medical College council; Ethical committee for their approval to conduct the present work.