Objective: To assess the knowledge of mothers regarding commonly used Complimentary alternative medicines, their usage and various therapeutic choices for common ailments.
Methods: A cross-sectional Survey on a predesigned proforma was done from July 2007- August 2007 in the out patient department of a tertiary care hospital. Consent was taken from the participants and 375 complete proformas were included in the study out of 500 interviewed.
Results: Of the 375 mothers who were interviewed, 237 (63.2%) believed in alternative medicine whereas 138 (36.8%) did not believe in it. Complimentary alternative medicines (CAM) was used most often in children with respiratory tract and gastro intestinal symptoms, the most frequently used therapy was Honey 58.9% and Joshanda 31.2%, followed by Heeng 11.3% and brandy being used in 2.8% for respiratory complaints. Gastrointestinal symptoms were treated with Saunf water 28.4%, mint 20.6% and ajwain 17.7%.Higher education level was associated with more complementary medicine use. Majority of mothers used it for gastrointestinal problems and respiratory problems 24% and 22.2% respectively.
Conclusions: Mothers are aware of various available CAM and are using them for different ailments like honey for respiratory illnesses, Saunf and Ajwain for gastrointestinal problems as they have been found to have linctus and antispasmodic effects respectively. It has also been observed that the CAM was used in combination with other therapeutic modalities and not alone (JPMA 60:1015; 2010).

For thousands of years, man has sought healing powers from the natural world. Practices of traditional medicine vary greatly in different region. Practices are influenced by culture, history, personal attitudes, education level and philosophy. Herbal and plant-derived remedies have been estimated by the World Health Organization (WHO) to be the most frequently used therapies worldwide.1
In developing countries, due to high cost of medicines and access to allopathic physicians, the provision of safe and effective traditional or alternative therapies are gaining popularity. Various countries like China, South Korea and Vietnam have fully integrated traditional medicine into their health systems.2 In Africa about 85% of the population uses CAM for different diseases.3 Traditional medicine is also practiced to varying degrees in the industrialized world. According to WHO, over 50% of population in Europe, Latin America and other industrialized countries have used CAM once in their life.4 In USA the total market for medicinal botanicals was worth US$ 3.87 billion in 1998.5 Looking at South Asia, it appears that there is an increase in trend of CAM use. It has been estimated that more than 70% of India\'s population uses CAM.6
A high prevalence of CAM use has been documented worldwide in children and adolescent. To determine the prevalence and reasons for CAM use among children various studies have been done. Prevalence of CAM use in children ranges from 63%7 and 18.0 % in Australia.8 The most frequent users of CAM were patients with asthma, eczema or allergy and patients suffering from diarrhea. CAM in our part of the world for children are used mostly because of word-of-mouth, personal experience or on recommendation by a senior family member, whereas in other countries there are CAM specialist recommending such therapy, therefore, making it a more controlled and monitored therapy. Some countries like China and Far eastern countries have herbalism or phytomedicine incorporated in the medical practice. People opting for alternative treatment do it because of dissatisfaction with conventional medicine and due to side effects. Research is required to find the efficacy and safety of the agents used as CAM. The aim of the present study was to assess the frequency, belief and trend of use of CAM by families. Herbal choices have been found to vary among different cultures and races. Familiarity with local medications is needed to access the efficacy and usefulness of such therapies.

A cross-sectional Survey was carried out from July 2007 to August 2007 in the Pediatric outpatient department of Liaquat National Hospital, which is located in the centre of Karachi and receives patients belonging to all socioeconomic classes. Data was collected by a trained lady health visitor by direct interviewing. The data was collected on a structured questionnaire which was given to the mothers visiting the paediatric out patient department (OPD). About 500 forms were distributed out of which, three hundred and seventy five (375) were completed and incomplete forms were discarded. They were asked about their socio-demographic variables like age, education, and professional status, the type of CAM modalities used and the illness or purpose for using it. Also combination of various therapies, (like homeopathic and allopathic) was also inquired to find the trend of medical attention. Data were analyzed using the Statistical package for social sciences (SPSS version 15.0). 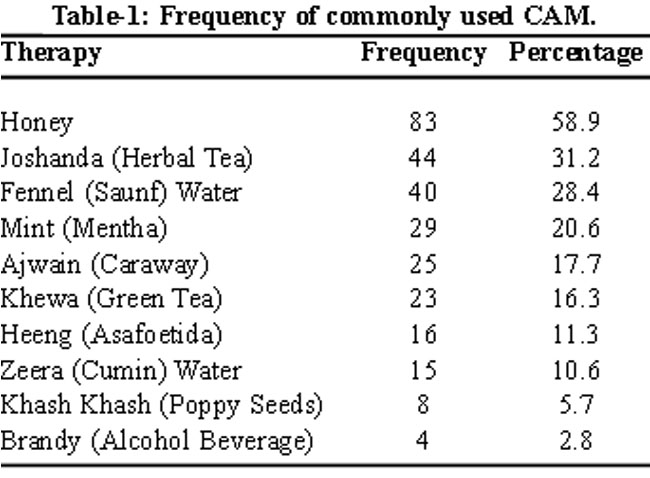 The most frequently cited reasons for CAM use were: "free of side effects", a preference for a \'more natural\' therapy, are "easy to give" and "provides quick cure". The use of CAM by mothers was mainly on the advice of various family members like Mother-in-law (n=146), Grand mother (maternal) of kids (n=98), Husband (n=27), other in-laws (n=30) and Neighbour (n=3) only (n=62) mothers used them on their own decision and experience.
It was seen that majority of the CAM were used in combination with allopathic over the counter medications and only 14.9% mothers used allopathy drugs alone (Table-2).

The use of CAM is based on tradition, availability and experience of individual. There should be awareness about other classes of alternate medicine (homeopathic, hikmat, home remedies). At times the patients may use allopathic medicines in combination with CAM and drug interaction can become a potential problem.