Objectives: To determine the histopathological pattern in childhood glomerulonephritis (CGN).
Methods: This retrospective analysis of renal biopsies of 118 children with various clinical syndromes of CGN was carried out at the National Institute of Child Health (NICH) and The Kidney Center (TKC), Karachi, from July 2005 to December 2009. The age ranged from 6 months to 16 years. All biopsies were studied under light microscopy (LM) and immunoflourescence (IMF). Histopathological lesions (HPL) were classified as primary and secondary glomerular diseases. Demographic data, indications and HPL were retrieved and analyzed using descriptive statistics.
Results: Out of 118 patients, 62 (52.54%) were males and 56(47.45%) females. Mean age was 8.2 ± 3.9 years. Major indications for biopsy were primary nephrotic syndrome (PNS 86, 72.88%). secondary GN (SGN, 17, 14.4%) and nephritic-nephrotic syndrome (NNS 13, 11%). Overall, primary glomerular diseases (PGD) accounted for 84.74% of all biopsies. Minimal change disease (MCD 38, 32.2%) and focal segmental glomerulosclerosis (FSGS 35, 29.66%) were the two most common lesions and accounted for 43% and 33.72% respectively in PNS. Other important lesions were membranous GN (MGN 10, 8.47%), membranoproliferative (MPGN 9, 7.16%), post-infective (PIGN 4, 3.38%) and IgM nephropathy (IgMN 3, 2.54%). Among secondary glomerular diseases (SGD), lupus nephritis (LN 11, 9.32%) was the most common lesion followed by Henoch- Schonlein nephritis (HSN) and haemolytic uraemic syndrome (HUS) each in 3 (2.52%).
Conclusion: Overall, MCD and FSGS were the two most common HPL in PGD and both dominated in PNS. Lupus nephritis was the leading lesion in SGD. These histopathological pattern of CGN in our study is in conformity with the existing literature from Pakistan (JPMA 60:1006; 2010).

Childhood glomerulonephritis (CGN) is a commonly encountered condition in nephrology practice. The pattern and prevalence of CGN varies considerably according to age, gender, racial, socioeconomic and geographical factors.1-3 It also depends upon the use of diagnostic techniques like light microscopy (LM), Immuno fluorescence (IMF) and electron microscopy (EM). 1-4 These modalities are available at very few centres in Pakistan.
Currently the epidemiological data of paediatric renal diseases and CGN in particular is available in large national registries from the developed world,6-8but such national registry is not available in Pakistan.9
In the recent past fairly reliable data on a large scale, on the pattern of paediatric renal diseases on native kidney biopsies and spectrum of histopathology in childhood Nephrotic syndrome (NS) with the role of evaluation techniques , has been published from Pakistan in international and local literature.4,9,10 But, as alluded earlier and in a study by Lanewala A et al,9 regarding national registry for paediatric renal diseases in the country, there is a strong need of epidemiological data on large scale in paediatric population using modern diagnostic aids like IMF and EM.4,9
This study was an attempt to collect, analyze and share our data of renal biopsies in children with the objectives to determine the histopathological pattern of lesions (HPL) based on renal biopsies studied by LM and IMF microscopy in various clinical syndromes of CGN.

This is a retrospective review of all renal biopsies done at the departments of Paediatric Nephrology at National Institute of Child Health (NICH) and The Kidney Centre (TKC), from July 2005 to December 2009. Patients were evaluated by history, examination and laboratory tests to establish the clinical diagnosis. Clinical diagnosis, the response to steroid in NS and indications for biopsy were decided according to standard guidelines.5,11 Children from 6 months to 16 years of age with clinical syndromes such as Primary Nephrotic Syndrome (PNS), Secondary Glomerulonephiritis (SGN), Nephritic Netphrotic Syndrome (NNS) and asymptomatic proteinuria (AsP) were included. Patients with congenital nephrotic syndrome were excluded.
Pre biopsy coagulation profile, complete blood count, renal function tests and ultrasound (US) were done in all cases. After informed consent from parents, biopsy was done under US guidance using Monopty gun technique. Two cores of tissue were obtained in each case, one for LM and other for IMF. Tissue biopsied was fixed in 10% buffered formalin for LM and IMF. Sections were stained with haematoxylin and eosin (H&E), Masson\'s trichrome stain, periodic acid Schiff (PAS) and Gomori\'s methanamine silver (GMS). For IMF, sections were stained by fluorescein isothiocynate (FITC) conjugated antisera specific for IgG, IgA, IgM, C3, C1q and fibrinogen (Dako Glostrup, Denmark). The staining reactions were graded semiquatitatively as 0 to 4+ and distribution was described as membranous or mesangial in a granular or linear pattern.
Final diagnosis was based on biopsy findings on LM, IMF and correlation of the histopathology with clinical data and serological results where necessary like in LN. Established criteria was used for the diagnosis of a particular glomerular disease and were classified into PGD and SGD.12
Data was collected on a proforma. Statistical software Package for the Social Sciences (SPSS) version 13 (Inc, Chicago, IL) was used for analysis. Continuous variables like age were expressed as mean and standard deviation (SD) and categorical variables such as sex and frequency of different HPL were expressed in percentages. 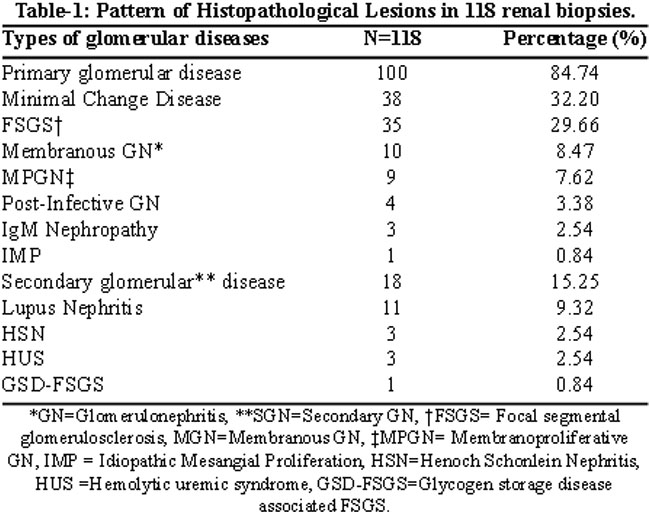 Table-1 shows the pattern of HPL in 118 renal biopsies where minimal change disease (MCD) is the leading HPL followed by focal segmental glomerulosclerosis (FSGS) and accounted for 32.2% and 29.66% respectively. Lupus Nephritis (LN) was the third most common HPL.
The pattern of HPL according to clinical indications is shown in Table-2.

Minimal change disease (43%) and FSGS (33.72%) were the two most common lesions in PNS. whereas LN (64.7%) was the dominant lesion in SGN. Post-infective GN and FSGS (30.76% each) were the two important lesions in NNS. Table III shows different HPL according to WHO class. Class III, IV and V (each 27%) were the common classes of LN. Membranous GN (27%) was the most common HPL in LN. Among SGD, Henoch Schonlein nephrites (HSN) and haemolytic uraemic syndrome (HUS) were the common glomerular diseases after LN and found each in 3 cases (2.54%).

This study provides important insights into the spectrum of HPL in CGN. The mean age of 8.17 ± 3.89 years in our study is comparable with other local studies.10,13,14 In our series, PGD accounted for 84.74% of all biopsies and SGD was observed in 15.25%. Among the clinical syndromes, PNS was the commonest clinical indication (72.88%) for biopsy followed by SGN and NNS accounting for 14.4% and 11% respectively. These figures are consistent with other studies also.10,15 Primary NS has been reported as the most common indication (69.4%) for biopsy by Lanewala A et al, which is similar to our observation.9 However, this is in contrast to study from Hong Kong ,in which SGN (34%) was the most common indication for biopsy.15 The SGN in our series is higher than a local study (3.1%)9but is consistent with a study from Croatia (16%).2 The third common indication in our study was NNS (12.2%), which is also comparable to another local study.13 The variation in indication may be due to difference in epidemiological variations in geographical locations and also due to difference in practice of biopsy.
Over all, the pattern of HPL in our study shows that MCD (32.2%) was leading HPL. This is consistent with 29.4% of MCD in a local study9 and with other studies around the world with similar indications.3,7,15
Minimal change disease and FSGS were also the two leading HPLs (43% and 33.72%) in PNS in our study. This is also comparable to local studies9,10 and from other parts of the world.7,15-18 Mesangial hypercellularity along with diffuse positivity for IgM and C3 in 3 cases suggest IgMN. Since controversy still exists regarding IgMN as separate entity, we consider IgMN, a sub-type of NS as suggested by Swartz SJ et al.19
In our series, FSGS was the second most common HPL and accounted for 29.66% of all biopsies and 33.72% of biopsies in PNS. FSGS was also found in NNS and in patients with AsP suggesting its variable course. This trend of FSGS has been documented by others as well.7,13,20,21 In a most recent local study on spectrum of histopathology in NS by Mubarak M et al, FSGS was found in 38.14% of the cases which is consistent with our figures.10 The increased proportion of FSGS in recent studies may be due to practice of subjecting difficult nephrotics for biopsy, in contrast to an original study on renal biopsies in which all cases were biopsied.11
Idiopathic MGN in our study accounts for 8.4% of all HPL, which is higher than reported in two local studies (6.2%),9,13 Such low rates (2.8%) in children has been reported recently by Chen et al.22
Mesangioproliferative GN accounted for 7.62% of all biopsies and 8.13 % among PNS. This is also consistent with two more recent studies but lower than reported by Kumar J (15%) from India.9,10,20 All the PIGN (3.36% ) were from NNS and with negative serology for post-streptococcal GN but LM and IMF favoured the diagnosis. Our observation is comparable with a local study.10
In our series, LN was the leading the HPL (64.7%) among SGD and contributed for 9.24% cases in overall biopsies. This is almost similar to study by Mubarak M et al.4 The high proportion (64.7%) of LN in SGD in our study is also consistent with a local study (54%) and with a study from Hong Kong (71%).9,15 In our series, common HPLs consistent with World Health Organization (WHO) class III, IV and V (Table 3), 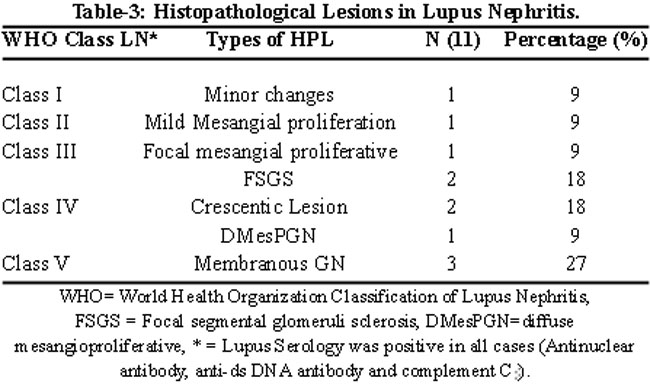 are comparable with a study from Lahore.23 Minor changes were observed on LM and negative IMF in one case but positive lupus serology (anti-nuclear antibodies, anti-ds DNA and low C3 ) is consistent with Class I LN and it may be possible to have negative IMF in earlier stage of LN. In fact, evaluation with EM becomes important but this facility was not available. In our 3 cases with diagnosis of HSN (2.5%), a diffuse proliferation with crescents on LM and predominant mesangial deposits of IgA similar to IgA nephropathy (IgAN) on IMF has not been reported locally but shown by Saca E et al in 6.9% from Jordan and by Yuen LK et al in 8% of cases.4,9,15,24 In our study, frequency of HUS (2.54%) is consistent with a recent local study.9 One with mesangial hypercellularity and HBsAg reactivity in a patient with PNS not proved as HBV nephropathy and labeled as idiopathic mesangial proliferation. Another case of FSGS in a child with NS and glycogen storage disease (GSD) was consistent with secondary FSGS since LM demonstrated intratubular glycogen deposits and IMF was negative. The GSD was also confirmed on liver biopsy. Hyperfilteration in GSD has been known to cause proteinuria, focal and global glomerulosclerosis, as well as renal failure as also shown in a recent study.25

The authors thank Dr. Javaid Kazi, Pathologist for his thoughtful review of the revised form of the manuscript.