Objective: To determine the distribution of HCV genotypes among the patients attending a tertiary care hospital in Dubai, UAE.
Methods: This was a descriptive study conducted from January 2009 to June 2009 in the Medical and Infectious Diseases clinics at Rashid Hospital Dubai. The study was designed to include patient\'s demographics, clinical information including the various risk factors for the transmission of HCV and laboratory data. The patients with positive screening test for HCV antibodies referred from the other clinics and peripheral health centers were included in the study. The HBV and HIV positive, as well as patients on haemodialysis and on immunosuppressive drugs were excluded from the study. The blood sample was collected and the confirmation of HCV was done by Western blot. The confirmed cases were subjected for HCV RNA levels and subsequently for HCV genotyping and sub-typing.
Results: A total of 223 patients (124 UAE nationals and 99 expatriates) fulfilled the inclusion criteria. The mean age of the patients was 38.3 ± 11.4 years. Most of the study patients were males (82.2%). Among the UAE nationals, 49.2% had genotype 1, 34.6% had 3, 14.5% had 4 and only 1.6% patients had genotype 2. High prevalence (68.4%) of genotype 1 was also observed in Iranian patients, while, 96.4% Egyptians had genotype 4 and 77.2% Pakistanis had genotype 3. The patients with genotype 1 had significantly high HCV RNA levels than the patients with genotype 3 and 4, p< .001 and < .009 respectively.
Conclusion: In this study high prevalence of genotype 1 followed by 3 and 4 was seen in UAE nationals which is in contrast to the earlier reports of genotypes 4 being most common in Middle East countries. Among expatriates, genotype 1 was common in Iranians, 4 in Egyptians and 3 in Pakistanis (JPMA 60:987; 2010).

Hepatitis C is a single stranded RNA virus of Flavivirus family, identified in 1989 and in the past it was responsible for more than 90% cases of chronic hepatitis C of post-transfusion hepatitis.1 World Health Organization (WHO) estimates up to 3% of the world\'s population to be infected with HCV and worldwide there are more than 170 million chronic carriers of HCV.2 Hepatitis C is a common public health problem and it is an important cause of chronic liver disease. After acute HCV infection, upto 85% of patients develop chronic hepatitis C, 10-20% of them develop cirrhosis and 1-5% may develop hepato-celluar carcinoma in 20-30 years time.1,3 Overall, HCV causes 20% of acute hepatitis cases, 70% of all chronic hepatitis cases, 40% of all cirrhosis of liver, 60% of hepato-cellular carcinomas and 30% of liver transplants, especially in Europe.4
Hepatitis C Virus (HCV) is classified into different genotypes depending on nucleotide sequence variability. Currently, HCV is divided into six major genotypes (1-6) based on genetic sequence, and than subdivided into over 50 alphabetically designated subtypes.5 The prevalence of HCV genotypes varies geographically. HCV genotype 1, 2 and 3 are distributed worldwide and their relative prevalence varies from one geographic area to another, whereas genotype 4 is predominantly prevalent in the Middle East and Africa, genotype 5 in South Africa and genotype 6 in Southeast Asia6,7 but there is lack of comprehensive data to make the appropriate inference as to which genotype is more common in these countries. According to the recent studies, genotype 4 is predominant in Egypt, 4 and 1 in Kuwait, Saudi Arabia and Syria, and genotype 1 in Lebanon, Iraq and Iran.8-10 The knowledge of distribution of HCV virus is important not only in knowing the prevalence of different genotypes, possible routes of transmission, to define the period and aspect response to the anti HCV therapy but also for future vaccine development.9 This study was conducted to determine the distribution of HCV genotypes among the patients attending a tertiary care hospital in Dubai, UAE.

This was a hospital based descriptive study conducted from January 2009 to June 2009 at the Medical as well as Infectious Diseases clinics at Rashid Hospital Dubai, UAE. Rashid hospital is a tertiary care center and is accredited by the Joint commission International (JCI). The patients with positive screening test for HCV antibodies referred from other clinics and peripheral health centers were included in the study. The study was designed to include patient\'s demographics (age, sex, nationality, etc), clinical information including the various risk factors (I.V.drug abuse, sexual contacts, blood transfusion, operative procedures and tattoo marks) for the transmission of HCV and laboratory data which included serum HCV RNA levels, HCV Genotypes and LFTs. The patients were included into the study after informed consent and data of each patient was entered in the proforma.
The patients with positive serology for Hepatitis B virus and Human Immunodeficiency Virus, on haemodialysis, on immunosuppressive drugs and those whose HCV RNA was negative on initial assessment were excluded from the study. A blood sample of each patient was collected and the confirmation of HCV was done by Western blot (HCV Blot 3.0 by MP Diagnostics). The confirmed cases were further tested for HCV RNA levels by polymerase chain reaction (Amplicor HCV Kit, Roche Diagnostic System) and subsequently HCV-RNA positive patients were genotyped by selective hybridization of amplicons to HCV genotype-specific oligonucleotides (Inno-Lipa2, Innogenetics). Liver function test (LFT) was done by Hitachi Machine 912. Data was analyzed by SPSS-14 version. A p Value of <.0.5 was considered significant for statistical analysis. 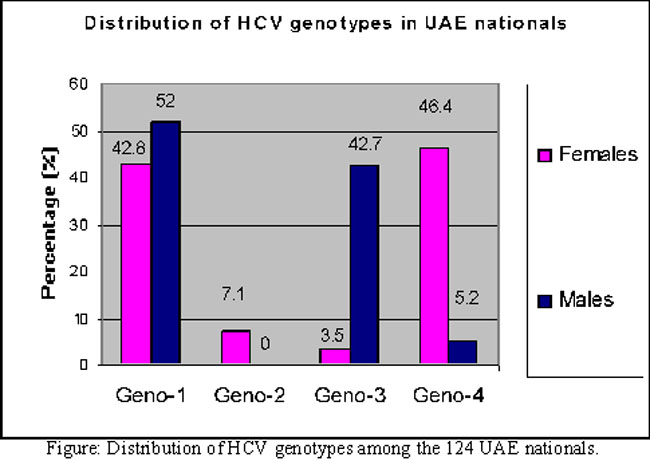 Hepatitis C is a common public health problem and one of the main causes of acute and chronic hepatitis. It is distributed worldwide and it has mainly six genotypes which are further subdivided into subtypes. However, there is geographical variation of distribution of genotypes and subtypes all over the world. In USA most common genotypes and subtypes are 1a followed by 1b, 2a, 2b and 3a.11 In England genotype 1 is common in the general public whereas genotype 3 in drug abusers.12 In Japan 1b, in China 2a, in Thailand 3a, in Indian subcontinents 3a, in South Africa 5a, in South East Asia 6 and in Africa and Middle East genotype 4 are common genotypes.13 Understanding of the geographic distribution of common genotypes requires detailed knowledge about the routes of transmission, prevalence of HCV in general population and in the various high risk groups, and also phylogenic evolution of types and subtypes over a long period.10 Unfortunately, there is little information available on these topics, particularly from Middle East countries and more specifically from United Arab Emirates.
There is lack of comprehensive data on the distribution of HCV genotypes in Middle East countries, particularly in the United Arab Emirates; however there are few studies which have reported high prevalence of genotype 4 in these countries.8,14,15 Pacsa et al and Simonds et al have reported the common genotype in the Republic of Yemen, Kuwait, Iraq and Saudi Arabia is genotype 4.9,16 Genotype 4 is also reported by McOmish et al and Ray et al as a most common genotype in Syria and Egypt respectively.17,18 In the present study we found genotype 1 as a major genotype followed by genotype 3 and 4. Our study is strengthened by the study report of Ahmadi Pour et al19 who reported genotype 1 as a common genotype in Iran. The above finding is also reflected in our study as 68.5% of the Iranian study patients had genotype 1. Contrary to the UAE male patients, UAE female patients had predominantly genotype 4 which could be explained by the fact that most of the female patients were of Egyptian origin where genotype 4 is the most common genotype and they might have been infected in their country of origin.
The other important finding in our study was high prevalence of genotype 3 and 1 in IDUs which is similar to IDUs in Europe and USA as reported by Pawlotsky et al.20 In the present study, we observed high prevalence of genotype 3 and 1 in younger (<40 years) male patients as compared to the older (>40 years) and female patients who predominantly had genotype 4 and 1. The above observation is inconstent with the reports of Kabir et al21 and Montalvo et al22 who found no difference in genotypes in terms of age and sex of the patients. In comparison to genotype 3, high prevalence of genotype 1 is reported among the patients who received blood/blood products transfusion.23 In the current study, we also had the same observation and the patients who received blood transfusion the frequency of genotype 1 was higher than 3.
The correlation of level of hepatitis C virus RNA and genotype have been observed, such as in comparison to genotype 3, HCV RNA levels in genotype 1 is reported high by Rhaghuraman et al.24 In this study, the HCV RNA level was also high in patients with genotype 1 than those with genotype 3 and 4. Whereas, there was no significant difference of HCV RNA level between genotype 3 and 4 as well as serum ALT levels among the different types of genotypes.
Further studies are required to see genotypes and subtypes in UAE and Saudi Arabia along with the response to therapy.

Burden of common mental disorders in patients with Functional Dyspepsia