A 35-year old male presented with history of fever and cough, off and on for 2 months with 2 episodes of expectoration of mucoid material a week back. LaTboratoiy findings revealed leukocytosis with increased number of eosinophiis and a raised ESR. 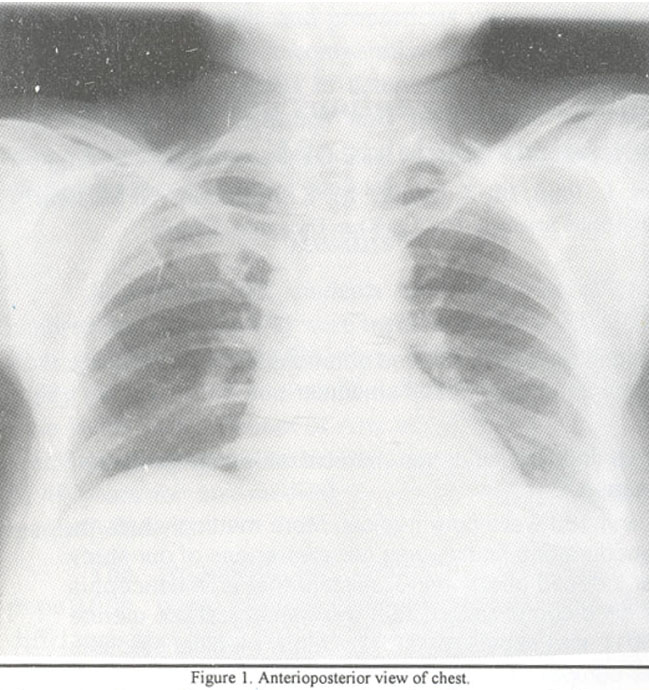 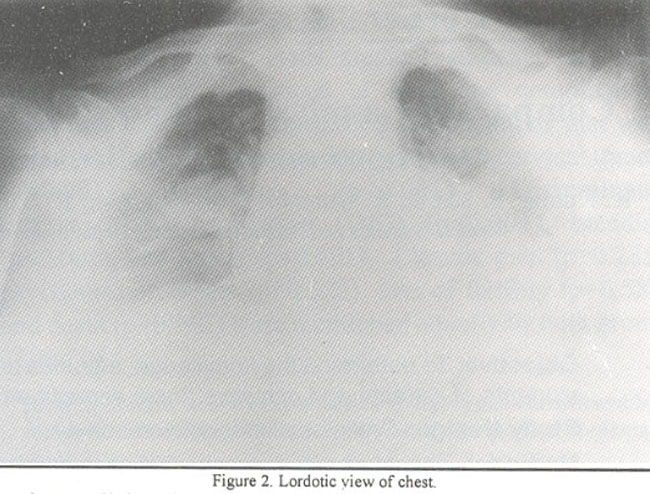 Chest X-ray (Figure 1) and a lordotic view (Figure 2) showed a 4 cm x 4 cm cavitatory lesion in the right apical area with a 2.5 x 2.5 cm soft tissue density within it with positive crescent sign.

Diagnosis: Aspergilloma,
Aspergillus species represent a dimorphic fungus that is ubiquitous in distribution. Although there are many species of Aspergillus, most human pathology is caused by Aspergillus fumigatus. The pulmonary manifestations of aspergillus infection are grouped in three categories1:
a) Aspergilloma - ball of fungus hyphae growing in an old pulmonary cavity.
b) Invasive aspergillosis - the fungus becomes a pathogen in its own right and invades pulmonary tissue causing necrosis.
c) Allergic bronchopulmonary aspergillosis.
In case of aspergilloma, the fungus colonizes any chronic cavitary or airspace (bronchiectatic cavity, old tuberculosis cavity, emphysematous bulla or cavity) except those in which tuberculosis is still active. The hyphae grow into a matted ball (or mycetoma), which lies free within the cavity. As the organism grows it creates extensive granulation tissue, which lines the cavity and may be a source of massive hemoptysis1,2.
Clinically, cough and expectoration are common in patients with aspergilloma. Hemoptysis is seen in 50-70% of cases2.
X-ray demonstrates a cavitatory lesion with a solid rounded mass inside it3. Air is seen between the mass and wall of the cavity and this has been described as crescent sign. There are no fluid levels within the cavity. The fungus ball typically moves with changes in position of patient. Since most chronic cavities are in the upper lobes, this is where the aspergillomas are usually found. The radiographic feature is a crescent of air between the ball and cavity wall is often best seen on tomography. Air crescent may not always be present, and the diagnosis of aspergilloma should be suspected in any chronic air space, which has opacified. On CT, early on, there may be a sponge like mass. A mature fungus ball may still contain of air4. Flecks of high density may be seen and most likely represent calcium.
In patients with massive hemoptysis, surgical removal of the diseased lung is indicated and may be life saving. In some instances the bleeding may stop spontaneously. Embolization of the bronchial vessels that usually supply the cavity have also been attempted.

Ameloblastoma - Management and Review of Literature