Ameloblastoma - Management and Review of Literature

Case report of a 71 year old male with a history of ameloblastoma who came to us with recurrence. The case has been reviewed in the light of recent literature available on the subject related to the management of recurrent ameloblastoma.

A 71 year old male with a history of ameloblastoma, presented with a complaint of swelling, dislocation and pain on the right side of the face; and on the right mandibular region. The patient had already been diagnosed as ameloblastoma in August 2000. Initial histopathology report revealed ameloblastoma (border line malignancy). Subsequently he underwent surgery. Unfortunately adequate radical resection was not done. However, he exhibited recurrence and came to our clinic in January 2002.
On examination, swelling on the right side of the face measured 5.0 cms approximately, extending up to right periorbital region with marked deviation of the jaw towards the right side. The lower extension could not be assessed. Right anterior cervical lymphadenopathy was also noted.
CT scan of face and neck showed a destructive lesion arising from right side of the angle of mandible, extending into para-pharyngeal space to infracrinal space causing erosion of the base of skull and petrous temporal bone, reaching into cranial cavity. No evidence of brain parenchymal involvement was noted. Right side cervical lymphadenopathy was also present. 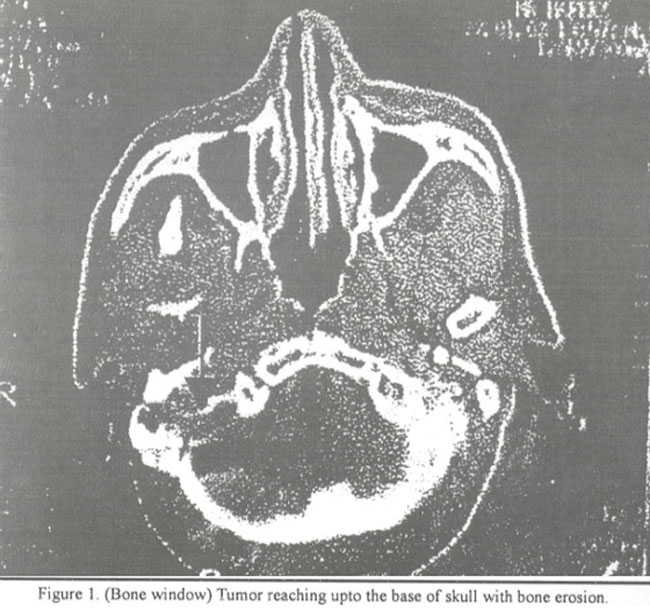 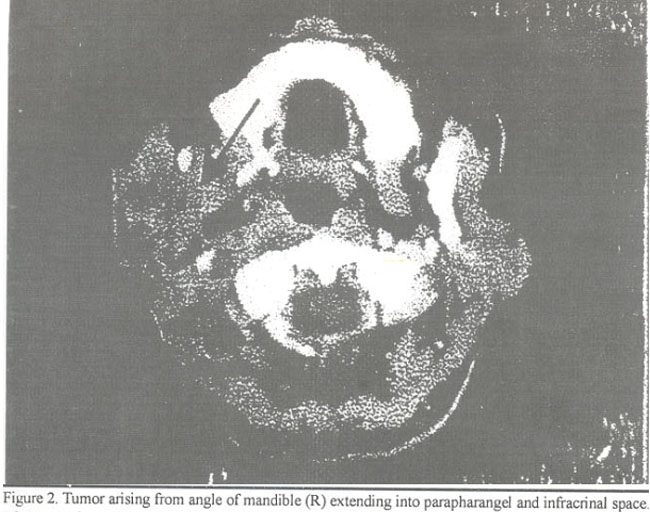 He denied any significant past medical history. His base line investigations including blood counts, blood chemistry, Electriocardiogram, chest radiograph and U/S whole abdomen were normal. Palliative radiotherapy was planned: 5000cGy in twenty five fractions, five days a week, with right and left lateral fields, size of 9X10cms respectively with separation of l3cms; which included base of skull, orbit and upper part of neck with shielding to cornea and lens.The patient died due to his progressive disease as he himself refused to undergo the prescribed treatment.

Ameloblastoma is the most common odontogenic neoplasm. Amelobiastoma, a locally aggressive jaw tumor with high propensity for recurrence is believed to arise from the remnants of odontogenic epithelium, lining of odontogenic cysts and basal layer of overlaying mucosa1. In contrast to squamous cell carcinoma of head and neck, which are relatively common these tumors are rare but have tendency to recur, This disease accounts for 1% of all tumors of the maxilla and mandible; and 11% of all odontogenic tumors2. The susceptible age is from 20 - 50 years3-5. Male-female distribution is equal. Eighty percent of ameloblastoma occurs in the ramus of mandible6-8. The remaining twenty percent occurs in maxilla9. Ameloblastoma are non-capsulated tumors. Histologically there are two basic patterns, Follicular and Plexiform. In both patterns the stroma is composed of mature fibrous connective tissue; however, the follicular contains island of epithelium within the stroma and plexiform contains cords of epithelium within the stroma9.
Ameloblastoma are classified in four groups; unicystic, solid or multicystic, peripherial and malignant.
The unicystic ameloblastoma is essentially a \'cystic\' lesion with either an intramural or an intraluminal proliferation10. Histologically it has three significant features: 1) Columnar cells resembling ameloblasts occupying the basal layer; 2) Hyperchromatic nuclei having a vacuolated atypical cytoplasm and 3) Loose stellate reticulum-like epithelium. Usually they are less aggressive than solid ameloblastoma10. The multicystic ameloblastoma can grow to an enormous size. It can infiltrate into adjacent structures and has ability to recur and metastasize. Multicystic ameloblastoma has a poorer prognosis than cystic ameloblastoma11.
The peripheral ameloblastoma occurs in the alveolar mucosa; however, the underlying bone can be involved due to secondary erosion12. This type of ameloblastoma is rare. The malignant ameloblastoma is also rare. Elzay and Corio et al, defined this lesion as an ameloblastoma that has metastasized but still maintains its classical microscopic features13,14.
Radiology and location are key factors to diagnose ameloblastoma correctly. Plain radiograph, panoramic radiograph, computed tomography (CT) and magnetic resonance imaging (MRI) are used as diagnostic tools. Findings may include expansion of cortical plate with scalloped margins, multiloculations or soap bubbl& appearance with root resorptions. CTs are used to delineate soft tissue lesion, erosion of bone and extension of tumor into adjacent structures, MRIs are not useful for hard lesions, but are used to detect the edges and consistency of the tumor15.
Ameloblastoma is the locally benign invasive tumor, with tendency to recur, metastasize and undergo malignant transformation. Recurrence seems to depend on several factors such as method of treatment of primary lesion, extent of lesion and the site of origin16. Recurrence rates also vary for different procedures used to treat primary lesion, Several authors have found a recurrence rate 55 to 90% for all ameloblastomas treated with conservatively (enucleation and curettage). However, the incidence of recurrence following radical resection is 5 to 15%16,17.
Surgery is the treatment of choice for ameloblastomas. Treatment ranges from conservative surgery to radical procedures, which include radiotherapy, curettage and enucleation. Surgery includes, removal of at least 1cm of normal bone beyond the tumor margins18,19. Soft tissue borders at the time of resection may also be confirmed by frozen sections to ensure complete removal of the tumor11.
Radiotherapy is rarely used as primary treatment, Some authors believe that radiotherapy should only be used for inoperable cases20. Other investigators advocate that radiotherapy in conjunction with surgery may have a place in the management of selected patients with recurrence. When first excision is inadequate and soft tissue is involved or positive surgical margins observed, a total dose of radiotherapy 5000 cGy postoperatively should be given21.
This case report emphasizes on the importance of complete surgical resection. As ameloblastoma has high tendency to recur, all possible efforts must be taken to evaluate the extent of the tumor to adjacent structures before surgery, to avoid recurrence or metastasis in future. Ameloblastoma may recur even after fifteen years or more18. Therefore, it is important to keep the patient under long term follow-up.