Long-term outcomes of Acute Myeloid Leukemia in Adults in Pakistan

Objective: To describe the long-term outcomes of Acute Myeloid Leukemia (AML) and to study clinico­pathological features at presentation, morphological subtypesand remission rates.
Methods: Demographic information, response to therapy and survival of patients (>14 years of age) admitted between January 1988 to August 1996 with acute myeloid leukaemia was retrieved and analysed.
Results: Seventy-four patients were admitted with a diagnosis of AML during the study period. There were 43 males and 31 females. Age ranged between 15 and 70 years with a mean age of 38 years. The most common presenting feature was fever (67.5%) and the morphological subtype according to French-American-British Group (FAB) criteria was M4. Fifty-five patients received treatment and were evaluable for response and outcomes. Thirty-six (65.4%) patients had complete remission. Sixteen (29.1%) died during the first 28 days after starting induction chemotherapy. The median survival was 11 months. Six (11%) patients (4 females, 2 males) are surviving beyond 4 years (long-term survivors).
Conclusion: Our study suggests that the long-term outcomes of adults with AML are comparable to what has been reported in the literature for patients who do not receive bone marrow transplants (JPMA 52:482;2002).

Acute myeloid leukemia (AML) constitutes 12% of acute leukemias under the age of 10 years, 28% between ages 10-15 years and 80-90% of cases in adults1. Whereas the mean age at presentation is 55 years, the incidence increases with age2. A remission rate of 50-70% has been observed with the current chemotherapeutic regimens and supportive care3, However, the vast majority of patients relapse and only 10-15% live for five years or more after the diagnosis4-6. These figures are derived from studies conducted in North America and Western Europe and may not reflect the pattern of disease in the developing world. It is known that there are some important differences amongst patients due to ethnic, socioeconomic and environmental factors7. The Aga Khan University Hospital is a tertiary referral and a specialist haematology center. Patients are referred from all over the country, the majority being from the regional areas. In this report, we present the clinicopathological features, remission rates and long-term outcomes of AML in adults in Pakistan.

The data were collected retrospectively and covered a study period between January 1988 and August 1996. Consecutive patients diagnosed to have AML and admitted to the hospital were enrolled. The medical records of all the patients above the age of 14 years were retrieved. The diagnosis was logged on the face sheet by the admitting Physician. The medical records department uses International Classification of Diseases (lCD) version 9.0. The patients were followed up till the end of December 2001 and hence a minimum of 40 months of follow up was available on all the patients. The chemotherapy regimens are as under: Induction chemotherapy with Cytosine arabinoside (Pharmacia-Upjohn, Stockholm, Sweden) 100 rng/m2 continuous intravenous infusion for 7 days and either Daunorubicin (Pharmacia-Upjohn, Stockholm, Sweden) 45 mg/rn2 intravenous bolus for 3 days or Mitoxantrone (Lederle, Baulkham Hills, Australia) 12 mg/m2 intravenous bolus for 3 days. Etoposide (Bristol­Myers-Squibb SpA, Latina, Italy) 100 mg/m2 was administered as intravenous infusion over 2 hours for 4 days in addition to the induction regimens for patients with M4 or MS FAB (French-American-British classification) subtypes8. Remission status was checked on the 10th day and after 3 weeks of induction chemotherapy. Six patients with M3 FAB subtype received All-trans retinoic acid (ATRA) (Hoffman-La Roche, Paris, France) at dose of 45 mg/m2 either alone (n=3) or in conjunction with chemotherapy (n3)9 for induction of remission. Once patients were in remission, two courses of consolidation chemotherapy were given, consisting of cytosine arabinoside 100 mg/m2 for 5 days and either Daunorubicin 45 mg/m2 for 2 days or Mitoxantrone 12 mg/m2 for 2 days. High-dose Cytosine arabinoside at a dose of 3.0gm! m2 per day in two divided doses for 3 days was administered for consolidation of remission10. A total of 3 courses were given at an interval of 3-4 weeks. The data are expressed as meanES.D. and as percentages where appropriate. Kaplan and Meier curves were used for survival analysis11.

Between January 1988 and August 1996, a total of 74 patients above the age of 14 years were admitted to the hospital with an underlying diagnosis of AML. There were 43 males and 31 females with a male to female ratio ofcommonest presenting symptom was fever (67.5%), followed by the symptoms of anaemia (45.9%) and bleeding (29.7%). Other significant presenting features included admission at our hospital and were admitted with a septic episode while two had intra-cerebral bleed. A total of 55 patients received chemotherapy and were evaluable for response and toxicity. Thirty-six out of 55 (65.4%) patients entered complete remission (CR). Sixteen (29.1%) died during the first 28 days after starting induction chemotherapy (early mortality). The median survival was 11 months. The overall survival of these patients is shown in Figure. Two patients received allogenic bone marrow transplantation in the UK, however, their overall survival was 6 and 12 months only.1.3:1.0. Their ages ranged between 15 and 70 years. The mean age at the time of diagnosis was 38 years. The anorexia, weight loss, fatigue and headaches. One patient was diagnosed incidentally.
Overall 55 (74.3%) had fever. Only 30 (40%) had a microbiological focus and 17 (22%) patients had a clinical source of infection. The commonest morphological subtype according to the FAB criteria8 was M4, details are shown in Table 1. 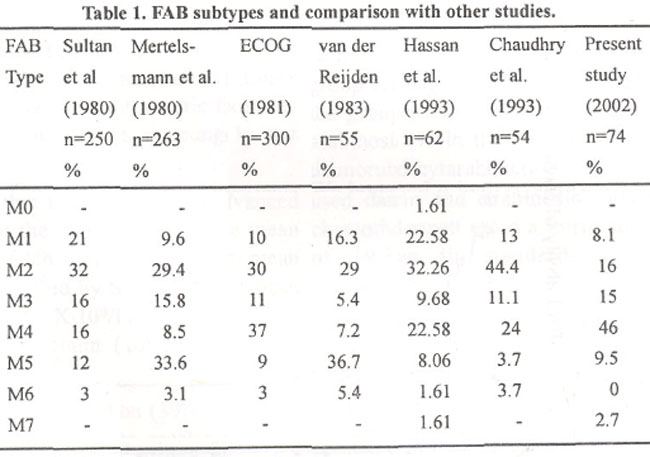 The haematological and biochemical features are shown in Table 2. 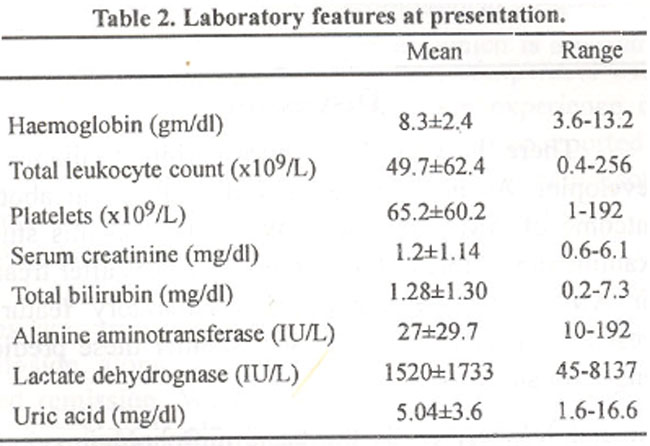 The mean haemoglobin concentration was 8.3 gm!dl, mean leukocyte count was 49.7x109/L and the mean platelet count was 65.5x109/L. Fifty-three (71.5%) patients had haemoglobin (Hb) <10 gm/dl while 13 (18.9%) presented with a total leukocyte count (TLC) >100 x 109/L (hyperleukocytosis). Mean lactate dehydrogenase (LDH) level was 1520 IU/L.
Ten (13.5%) patients did not receive treatment and left hospital after the diagnosis because of several reasons including financial constraints. Nine (12.2%) patients died before the treatment could be commenced at our hospital. Seven of these patients presented with signs of sepsis. Out of these 9 patients, 5 had pneumonia, and two had received chemotherapy prior to admission at our hospital and were admitted with a septic episode while two had intra-cerebral bleed. A total of 55 patients received chemotherapy and were evaluable for response and toxicity. Thirty-six out of 55 (65.4%) patients entered complete remission (CR). Sixteen (29.1%) died during the first 28 days after starting induction chemotherapy (early mortality). The median survival was 11 months. The overall survival of these patients is shown in Figure. Two patients received allogenic bone marrow transplantation in the UK, however, their overall survival was 6 and 12 months only.
Six (fl%) patients are surviving beyond 4 years (long-term survivors). Of these 4 are female and 2 males. One patient developed non-Hodgkins lymphoma (NHL) 3 years after diagnosis. He went into complete remission after receiving chemotherapy for NHL for two years. He remains alive with CNS disease. One patient had M2 FAB subtype, 2 had M3, 2 M4 and one M5 subtype. Only one patient presented with hyperleukocytosis. The same patient had trisomy 8 on karyotyping. Age, gender, FAB subtype, presenting Hb. TLC, platelets, LDH, bilirubin and creatinine were tested and found not significant on univariate analysis for long-term survival. The features of long-term survivors are shown in Table 3.