Breech presentation has been recognized for centuries and was at one time considered advantageous as the midwife could pull on the legs to assist delivery1. The incidence of breech presentation is only 3-4% at term but it is far commoner in the preterm infant i.e., 15% at 32 weeks and 30-40% at 20-25 weeks2. Breech presentation is associated with a higher perinatal morbidity and mortality than cephalic presentations. Historically the mode of delivery remained vaginal until in late 1950’s when routine cesarean section was recommended to minimize the perinatal morbidity and mortality of the fetus presenting as breech. Subsequent international studies3,4, as well as original published articles in local Pakistani journals5-7 found that increasing the use of caesarean section regardless of fetal size and gestation carried no advantage. However recent publication of results of the multi centre term breech trial8, recommends planned caesarean section as the route of choice for better neonatal outcome at term.
This prospective study was undertaken at the MCH Centre, Pakistan Institute of Medical Sciences, Islamabad from January 1999 to August 2000 to determine the maternal and neonatal outcomes of women with breech presentation at or beyond 28 weeks gestation. The objective was to conduct an audit of the current departmental policy. This policy was based on the limitations of neonatal intensive care facilities and monetary constraints that resulted in higher morbidity and mortality at gestations less than 34 weeks regardless of the mode of delivery. Moreover, the availability of trained senior residents for vaginal breech delivery facilitated the policy of selective vaginal breech delivery at and beyond 34 weeks.

This prospective study was carried out from 1st January 1999 till 31st August 2000 at the Mother and Child Health (MCH) Centre, Pakistan Institute of Medical Sciences, Islamabad. This 125 bedded Obstetric and Gynaecology Unit serves as a tertiary care hospital for Rawalpindi and Islamabad region. All women delivered in the unit during this time period with singleton breech presentation at or beyond 28 weeks gestation were included. A single postgraduate resident abstracted the records and neonatal data of each case onto a specially designed study performa.
For the preterm labour from 28 to 33 completed weeks, the departmental protocol recommended vaginal delivery as the chosen route unless cesarean section was indicated for maternal reasons while at 34 to 36 weeks the mode of delivery was decided on an individual basis in consultation with the specialist. The departmental protocol at >37 weeks was selective trial of vaginal breech delivery. The guidelines for vaginal breech delivery at term were a clinically adequate pelvis, frank or complete breech of weight <3.5 kg with a flexed head and feet above the level of buttocks. Absolute contraindications to vaginal breech delivery were same as for cephalic presentation e.g., major degree of placenta praevia. Relative contraindications were related to the judgement of the in charge specialist e.g breech complicated by IUGR, PIH, previous caesarean section etc. In selected patients external cephalic version was offered at >37 weeks. Elective caesarean section was booked at 38 weeks and the indication for operative delivery recorded.
The recorded maternal demographic variables included age, height, weight, parity, social status and past obstetric history. Details of prenatal care, prenatal ultrasonography, external cephalic version and X-ray pelvimetry report were noted.Fetal presentation and position were reconfirmed by ultrasound at the beginning of labour. Electronic fetal monitoring was available during labour at or beyond 34 weeks gestation. Narcotic analgesia was available on request and oxytocin was used after consultation with the specialist in charge when indicated to augment labour.
The intrapartum data recorded included gestation at delivery and presenting complaint at mission. Gestational age was calculated by the history of last menstrual period that was confirmed in booked cases by second trimester ultrasound. For women admitted in the labour ward suite, the nature of labour i.e., spontaneous, induced or augmented was termined. All deliveries were conducted in the presence of third year postgraduate residents with an anaesthetist on standby and a paediatrician present for neonatal resuscitation, Total breech extraction was never performed.
Neonatal outcome data included weight, sex, Apgar score at i and 10 minutes, admission to the neonatal intensive unit (NICU) and their subsequent course and diagnosis. Neonatal morbidity was considered to be present in case of fractures, haematoma with hyperbilirubinaemia, paresis or paralysis, visceral trauma and Apgar score <7. Perinatal mortality was defmed as including all IUD’s and death of the neonate during the first week of life. Corrected perinatal mortality was defined as perinatal mortality after exclusion of neonates with major malformations.
The data was entered in Microsoft Excel spreadsheet and the range, mean and standard deviation calculated for selected parameters. The patients were then stratified into three groups according to the gestational age, i.e., 28 -33 completed weeks, 34-36 completed weeks and >37 weeks and neonatal outcomes for each group were correlated with mode of delivery. In addition for patients at term the data was also analyzed separately for primiparous and multiparous patients as well as intention to treat as elective ceasarean section or trial of vaginal delivery. Statistical analysis was performed by SPSS. Independent sample two-tailed t test was performed for the gestation groups. 95% confidence limits were used (p value of <0.05 to test for significance).

During the study period, 171 women >28 weeks gestation delivered with a breech presentation. The maternal demographic data is shown in Table 1. 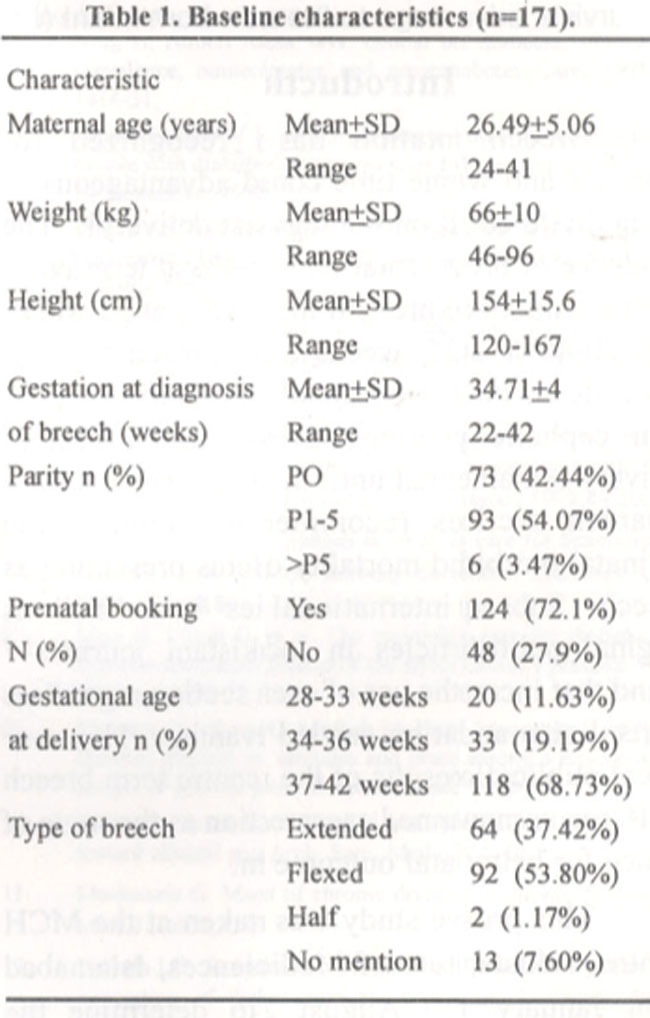 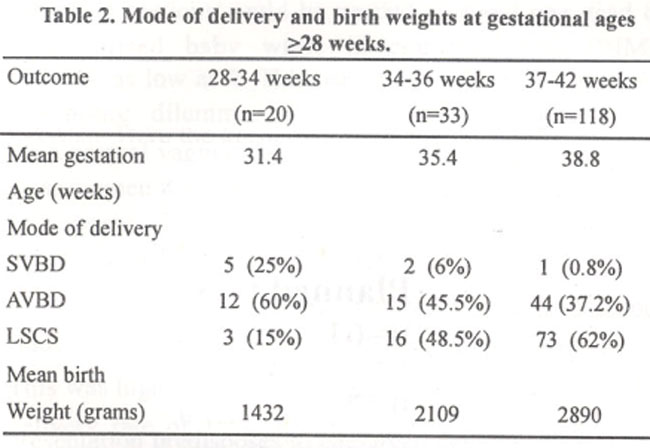 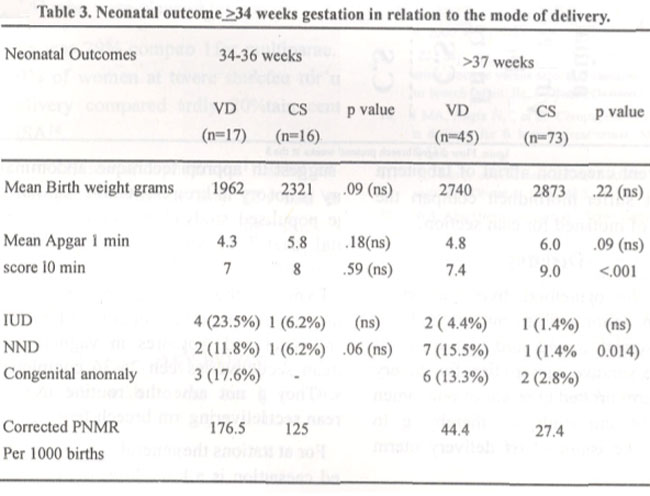 Twenty three women had external cephalic version at term of which 8 (34.8%) were successful and these 8 women were excluded from analysis. At term gestation > 37 weeks, 118 women were delivered (Figure). 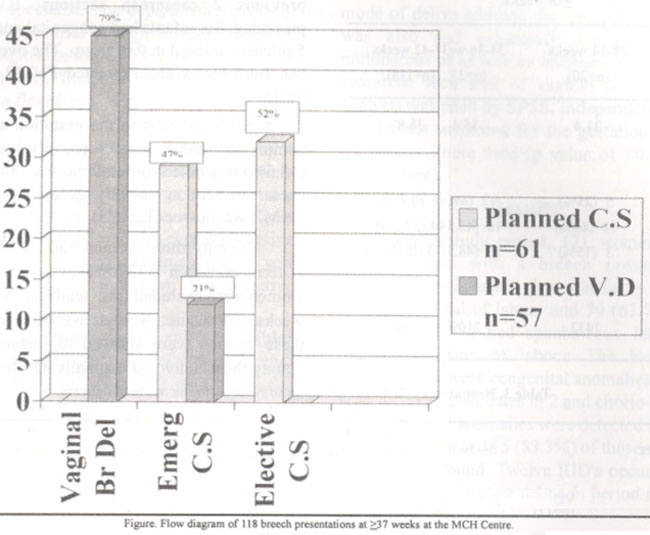 Almost half of these women were allowed to undergo labour and 79% among these delivered vaginally. Of the 118 women at term gestation, 52 were primiparae and 66 multiparae (Table 4). 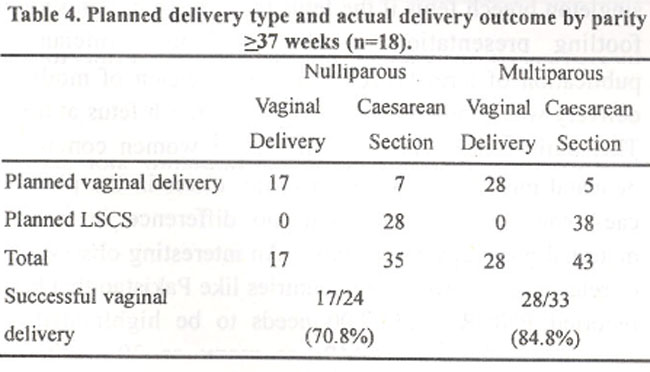 Trial of vaginal delivery was successful in 71% primiparae and 85% multiparae at term. The mean Apgar score was lower and PNMR was higher for infants delivered vaginally when compared to infants delivered by caesarean section and this difference was statistically significant for the 10 minute Apgar score and neonatal death (Table 3).
Seventy three (61.9%) women at _37 weeks gestation required caesarean section. The indications were flexed breech 15 (21%), fetal distress 14 (19%), IUGRIPIH, previous caesarean section and non-progress of labour 11 (15%) each, footling breech 4 (6.9%) and 6 (8.2%) for miscellaneous indications. The infants of women who did not suffer excess morbidity when compared to the infants of mothers planned for caesarean section.

The optimum method of delivery in women in preterm labour with a fetus presenting as breech is controversial. A randomized controlled trial that compared elective versus selective caesarean section for the delivery of preterm breech resulted in recruitment of only 13 women over 306 cumulative study months9 thereby failing to resolve the issue of optimal route of delivery of preterm breech.
The preterm breech infant delivered vaginally is generally lighter, of lower gestational age, in poorer condition and often attended by junior residents. Conversely, fetal distress during preterm labour with breech presentation may require caesarean section and the neonate may be in poor condition at birth. Ismail et al10 found the average fetal weight among very low birth weight infant less than 1500g was 250g lesser than in LSCS group. The poor perinatal outcome of breech delivered infant was due primarily to VLBW, congenital malformation and premature labour. Although abdominal delivery had lower neonatal mortality rate than vaginal delivery the difference was not significant after adjustment of confounding factors.
They suggest that with appropriate technique abdominal delivery is not mandatory in breech presentation. Similarly a large population based study found a relative risk for neonatal death of 1.7 in vaginally delivered infants weighing 501-1750g11.
Experience in other developing countries like Jordan12 found no significant differences in intrapartum and early neonatal deaths and Apgar scores in vaginal and Caesarean section in deliveries between 26-36 completed weeks. They also did not advocate the routine use of caesarean section for delivering preterm breech fetuses.
For at term gestations there is general consensus that planned caesarean section is a better mode of delivery for singleton breech fetus if the fetus is large, compromised, in footling presentation or the available clinician is inexperienced in vaginal breech delivery. Prior to the publication of term breech trial8 the decision of mode of delivery was controversial for most of breech fetus at term. This multi-centre trial involving 2083 women concluded that perinatal mortality, neonatal mortality and serious neonatal morbidity was significantly lower in the planned caesarean section group with no difference in serious maternal morbidity or mortality. An interesting observation of relevance to developing countries like Pakistan that have reported PNMR >20/1000 needs to be highlighted. In countries with high PNMR, as many as 39 additional.
The overall caesarean section rate at term in our study was 62% while among the candidates for vaginal breech delivery, the caesarean section rate at term was 21%. This was higher than the concurrent institutional caesarean delivery rate of 15%, confirming the notion that breech presentation predisposes to caesarean delivery. This is true particularly for primiparae13 who were planned for vaginal delivery for singleton breech where the caesarean section rate was 29% compared to 15% for multiparae. However, 50% of women at term were selected for trial of vaginal delivery compared to hardly 20% in certain centers in USA14.
External cephalic version15 is successful in 50% -70% of selected cases. Only 23 women had external cephalic version attempted in the present study with a success rate of 35%. Therefore increased recruitment for being encouraged in eligible cases at our this procedure is centre.caesarean sections could be needed to avoid one dead orcompromised baby while in countries with PNMR <20/1000, the number of additional caesarean sections could be as low as 7. This particular conclusion leads to a continuing dilemma to the experienced clinician in Pakistan. Here the keenness of the woman and her in-laws for a normal vaginal delivery is compounded by failure of these women with previous caesarean section to report for a subsequent delivery in the hospitals equipped with Emergency Obstetric Care (EOC).

We wish to express our gratitude to Dr. Saqib Shahab, Assistant Professor, Health Services Academy for his invaluable help in analysis phase of our study.