Objective: To examine the differences in the demographic and clinical characteristics of patients admitted through emergency versus non-emergency routes and see if these two groups of patients were significantly different from each other with respect to criteria mentioned in the title.
Methods: Retrospective data was analysed in all 2576 patient records were reviewed and these patients were divided in two groups with respect to their mode of admission (emergency vs non emergency). These groups were then compared with respect to sex, age, length of stay, discharge status and diagnostic categories. Statistical package for social sciences version 8.0 (SPSS 8.0) was used to analyze the data.
Setting: The study was conducted at the Aga Khan University Hospital, is a private tertiary care hospital with a 13 bed psychiatric facility.
Results: When these two groups were compared, significant differences were found, with ER patients having a shorter length of stay and youngest mean age, proportion of females admitted via ER was greater than those in non-ER group. There were significantly more women in each group who were married. The percentage of patients who left against medical advice was greater in the ER group. In both the groups mood disorders including Bipolar disorder and major depressive disorders was the most prevalent category with psychotic disorders to follow. The percentage of patients in both these categories was greater in the non-ER group where as percentage of patients with conversion disorder was higher in the ER group.
Conclusion: Significant differences were found in the patient characteristics admitted via ER versus Non ER. Shorter length of stay in ER group might indicate an acute episode resolving quickly. Studies need to be done prospectively to determine the difference in the two groups thus ascertaining the level of care needed for each group. Lastly, the high proportion of patients coming through the ER also indicates that there exists a need for primary care involvement in mental health care thus reducing the need for emergency room usage. Clinical and Demographic Characteristics of inpatients admitted via emergency and non-emergency routes at a university hospital in Pakistan (JPMA 52:456:2002).

There have been very few studies examining the difference between the patient characteristics admitted via emergency route vs other non emergency routes e.g. clinics. In this country psychiatric patients are brought to the ERs mainly when they have an acute episode or their families feel concerned about their own safety or the patients safety1. However there is no data on Pakistani population reporting if there is a significant difference between the two groups with respect to age, gender, diagnosis, marital status and length of stay. There are some studies done in the west which examine these characteristics in voluntary and involuntary patients2, but route of admission was not accounted for. The present study attempts to examine those differences among the patient who got admitted via ER and those who were admitted through settings other than ER which could mean clinics or direct admissions to the ward or transferred from other services. This study examines the records of a large number of patients to see if they differ with respect to the diagnosis, length of stay, age, gender and discharge status. This study also discusses the need for mental health training at the primary care level and excessive use of Emergency room by Psychiatric patients.
The site of the study was The Aga Khan University Hospital which is a referral center for the entire population of Pakistan, as well as it provides primary care to vast number of people in Karachi and surrounding communities. This university hospital (AKUH) began functioning in 1986 and the Psychiatric Services began approximately at the same time. It was not until 1990 when a psychiatric inpatient unit started to function1. At the time AKUH has a 13 bed, short term inpatient unit, with outpatient clinics 5 days a week and 24 hour emergency services. One clinic a week in the community health center and consultation -liasion services 24 hours a day, 7 days a week is also provided. Referals to Psychiatry from the ER are made by the resident at the ER in consultation with the ER attending (supervisor) and the decision to admit is made by the psychiatry resident on call in consultation with their supervisor. From sites other than the ER such as consulting clinic or other services, psychiatry residents admit the patient after consultation with their supervisor. So the referrals to psychiatry may be influenced by the referring services approach towards mental health1, hence our sample may not indicate the actual psychiatric morbidity in our population. Also, our hospital might be a little different from other hospitals in Pakistan. First of all it is located in a very large cosmopolitan city with a lot of diversity in its population. Being a tertiary care facility in the private sector, it is a relatively expensive place so the majority of service users are atleast middle class, city dwelling, moderately educated people. This sets it apart, somewhat from other psychiatric facilities in Pakistan most of which are in Public Sector3.

In all 2576 patients were admitted to the Psychiatry ward at the Aga Khan University Hospital between November 1989 and November 1999. The Aga Khan University Hospital is a private, tertiary care hospital with a 1 3-bedded psychiatric unit. The admissions to this unit are either through ER or via other sources such as clinics, other services and direct elective admissions. Psychiatry residents admit these patients in consultation with their supervisors after evaluating these patients in the ER or the other referring source. A record search was done for all of these patients using a computerized data extraction from the face sheets of these patient records. These patients were then divided into 2 groups with respect to their mode of admission i.e. through the emergency room versus other routes. Other routes included clinics, transferred from other services and direct elective admissions to the ward. These two groups were then compared with each other with respect to gender, age, length of stay, discharge status and diagnostic categories. Medical records used lCD 94 for coding purposes, and we divided these patients into 12 basic diagnostic categories (Table). For the discharge status categories; sent home (SH) and left against medical advice (LAMA) were retained while transfer out (TR) and expired (E)  were excluded thus excluding 4 cases out of the total 2576 records for testing association between admission status and discharge status.
Chi-square test of independence was performed to test if there was a significant association between admission status and sex, discharge status and diagnostic categories respectively. 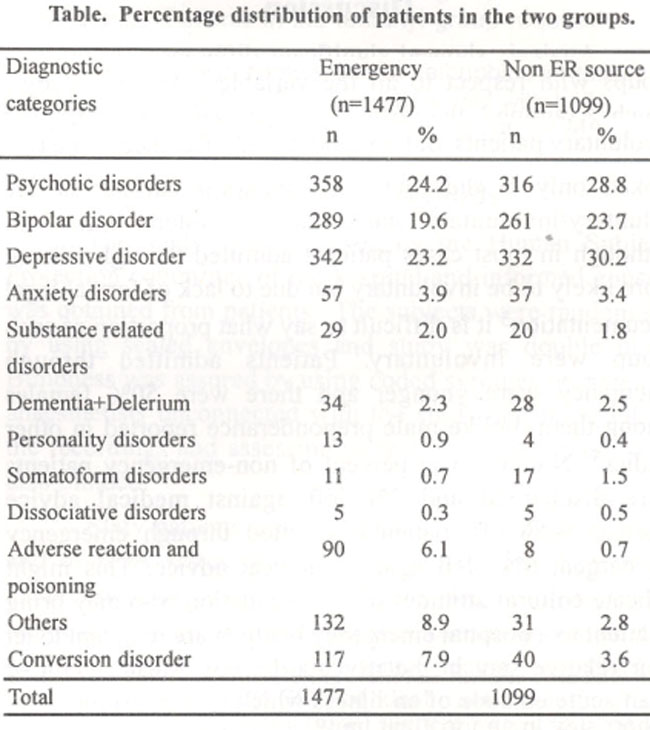 Analysis showed significant differences in the two groups with respect to all the variables. Another study2, which examined the difference between voluntary and involuntary patients, did not find much difference in the two groups. The present study was different in the sense that it looked only at the route of admission but not at the voluntary/involuntary status due to system limitation. Although in most cases patients admitted through ER are more likely to be involuntary but due to lack of formal legal documentation3 it is difficult to say what proportion of each group were involuntary. Patients admitted through emergency were younger and there were 50% females among them, unlike male preponderance reported in other studies5. Ninety seven percent of non-emergency patients were discharged and 3% left against medical advice whereas 94% of patients admitted through emergency discharged, 6% left against medical advice. This might indicate cultural attitudes of our population who may bring a patient to a hospital emergency but then are reluctant to let their relative stay in the psychiatric unit. Mean length of stay was also shorter in emergency group perhaps indicative of an acute episode of an illness which responds quickly to a short stay in an inpatient unit6.
Diagnostically the two groups were quite different from each other with percentage of patients with Psychotic disorders, Bipolar disorder and major depressive disorder higher in non-emergency group - however psychotic disorders contributed only 24.2% and 28.8% in emergency and non-emergency groups respectively. This is markedly different from the statistics reported from other underdeveloped countries where Schizophrenia and other Psychotic disorders contribute around 50% of hospital population7. In our samples mood disorders (Bipolar disorders and depressive disorders) dominate both the groups (42.8% for ER and 53.9% for Non ER). Conversion disorder was much higher (7.9% vs 3.6%) in the patients admitted via ER, pointing towards the emergent nature of the presentation of the syndrome. Overall the length of stay for both the groups remained short (8.2 and 11 days) owing to the fact that cost of psychiatric treatment in the private sector is considered high and the cultural belief of the people towards a medical/hospital based model of psychiatric treatment remains negative in this country as in many other countries8. This puts staff at the psychiatric ward under considerable pressure to discharge patients quickly. Also financial obligations of the patients influence discharge status in other specialties and in other cultures as well9. Curiously, though, in our sample proportion of those who leave against medical advice remains low.
These fmdings may also have service implications such as development of a separate psychiatric emergency service because of the large proportion of psychiatric patients coming through emergency. Looking at the total volume of patients coming through the emergency it is also evident that there might be an excess use of emergency route by the psychiatric patients. This could be due to lack of mental health training of the primary care workers which include health workers and family physicians10. This puts the emergency service under a lot of burden of taking care of non-emergent cases in the after hours when most psychiatrists are not readily available. The primary care givers can form an effective point of contact helping with a crisis situation and make an appropriate referral in non-emergent cases. This will not only reduce the burden on an already overburdened emergency service but will also reduce the total cost incurred by the patient and the health care system altogether.
It should be noted that our sample population and the setting may not represent the general psychiatric setup in Pakistan. As it was mentioned earlier in the introduction that being a tertiary care facility in the private sector, it is a relatively expensive place so the majority of service users are atleast middle class, city dwelling, moderately educated people. The actual prevalence of different psychiatric illnesses the gender difference and range of psychiatric emergency service might be very different in other areas of Pakistan as well as other institutions within our area.