Objective: To assess the efficacy, safety of cefaclor for the treatment of pharyngotonsillitis in Pakistani children.
Method: Pakistani children between the ages of two to twelve years and diagnosed with pharyngotonsillitis were eligible to participate in the study. Cefaclor was administered three times daily for a total dose of 20-40 mg/kg/day, depending on the severity of the infection, for 7 days. Patients were evaluated on the basis of symptomatic response and antibiotic susceptibility pattern as a result of bacteriological examination.
Results:  Based on observed pre-therapy signs/symptoms of infection with pharyngotonsillitis, 99% of patients (95% Cl= 94.9% to 100.0%) were reported as having a symptomatic response of Cure or Improvement by end of study. Group A b-haemolytic Streptococci was the most prevalent pathogen isolated pre-therapy (occurring in 45% of patients). Of all patients for whom this pathogen was isolated, 64% had complete eradication by end of therapy, while there was persistence or superinfection in 36% of patients. Only 9 occurrences of non-serious adverse events were observed among 7 of the 107 patients, including diarrhea (5), nausea (1), vomiting (1), rash (1) and stomatitis (1).
Conclusion: Based on the high symptomatic response rate of 99% and the positive safety data, cefaclor was found to be effective and safe in treating Pakistani children with pharyngotonsillitis (JPMA 52:451;2002).

Pharyngotonsillitis is a common pathology, occurring during childhood. Though viruses may be responsible for the infection, a significant number of cases present a bacterial pathology1, with Streptococcus a common causative bacteria2. The primary patient symptom indicative of this infection is characterised by sore throat and pain during swallowing. Other symptoms, including fever, headache, pharyngeal erythema, leukocytosis and vomiting, may also be present3.
Pharyngotonsillitis is a self-limiting infection, with spontaneous clinical recovery in many patients, but there is substantial evidence to suggest that early therapy will decrease infection duration and severity4,5. Furthermore, if left untreated, the risk remains for progression to more serious complications such as rheumatic fever6. Since rheumatic fever remains a public health problem in Pakistan and other developing countries, and is the most prevalent cause of acquired heart disease in children7, it is imperative to administer treatment upon identification of infection.
Bacterial pathogens commonly associated with such infection have developed clinically significant resistance to the traditional first-line antibiotics8, creating the need for other alternative treatment modalities. The effectiveness of cefaclor spans a wide range of Gram-positive and Gram-negative organisms commonly associated with infections of the respiratory tract9. The drug has a molecular stability, rapid absorption, more than 90% bioavailability and effective penetration of the respiratory mucosa10.
Currently, there is little information available on the use of cefaclor as the primary treatment of pharyngotonsillitis in Pakistani children. Therefore, this study was done to evaluate the use of cefaclor in Pakistani children presenting with pharyngotonsillitis.

Patients
Children between the ages of two to twelve years and diagnosed with pharyngotonsillitis were eligible to participate in the study. Informed consent was obtained for all participants and the study was approved by an ethics committee in each study area. Pharyngotonsillitis was defined as the presence of sore throat and evidence on physical examination of inflammation of the pharynx or tonsils, including swelling and/or erythema. Optional symptoms included fever _J00°F (3 8°C), pharyngeal exudate, and tender cervical lymph nodes.
Individuals were excluded from the study for any of the following reasons: underlying medical conditions precluding response evaluation; an anticipated requirement for systemic antibiotics other than the study drug; hypersensitivity to cephalosporins or penicillin, use of other investigational agents within 28 days prior to study entry, history of significant renal and/or hepatic impairment. In addition, patients who previously completed or withdrew from the study were not eligible to participate.
This was a multicenter, single arm open label study involving 9 study centers in Pakistan. Cefaclor was administered three times daily for a total dose of 20-40 mg/kg/day, depending on the severity of the infection, for 7 days.
Patients were evaluated on the basis of symptomatic response and antibiotic susceptibility pattern as a result of bacteriological examination. Each patient visited the physician on day 1, day 4 and day 7 (or up to 2 days later) of the treatment period. On day I (pre-therapy), and after obtaining informed consent, baseline history and physical examination were performed. Diagnostic signs and symptoms were assessed and a representative specimen (throat swab) was collected for culture and sensitivity analysis. Symptomatic response was re-assessed on day 4 (during therapy) and day 7 (end of therapy), with a second throat swab collected for bacteriological examination on day 7 only.
Symptomatic response was determined through the clinical judgement of the examining physician, both during and at end of therapy and was classified as Cure (elimination of signs and symptoms of infection with no recurrence by end of therapy), improvement (significant but incomplete resolution of signs and symptoms of infection, relative to the patient’s symptomatic baseline), failure (signs and symptoms have not subsided or improved, relative to patient’s symptomatic baseline, with therapy), relapse (worsening of signs and symptoms of infection following a previous symptomatic response of ‘cure” or “improvement”) and indeterminate (unable to evaluate a symptomatic response due to patient being lost to follow-up or patient requiring the use of another systemic antibiotic for a different indication).
Adverse events were classified as serious if they resulted in death, hospitalisation, severe or permanent disability, congenital anomaly, drug overdose, or if they were life threatening.
The bacteriological response was based on the culture reports generated at an approved local laboratory and was defined as eradicated (the causative pathogen was absent at the end of therapy evaluation), persisted (the culture remains positive for the causative pathogen at the end of therapy evaluation), superinfection (the appearance of new pathogens other than the pathogen isolated from the pre-therapy culture with a concomitant worsening of the clinical condition).
Any unused study medication was returned and counted at the end of therapy visit to establish patient compliance. Compliance was achieved, if the patient took more than 80% of the study medication as prescribed. In the intent-to-treat approach, all patients assigned study drug were included in the safety and effectiveness analyses.
Analysis was performed on an intent-to-treat basis. Symptomatic response was dichotomised by aggregating the responses, Cure or Improvement, to denote a successful response to treatment. The proportion of patients classified as having a successful response was computed, along with its 95% confidence interval (CI). Computations were based on the last observation carried forward approach. 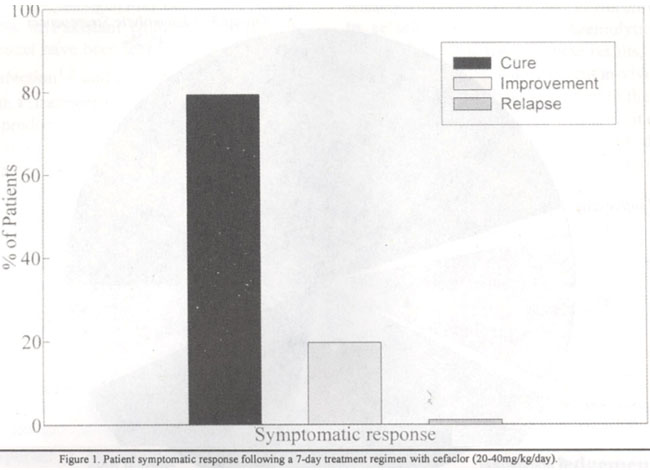 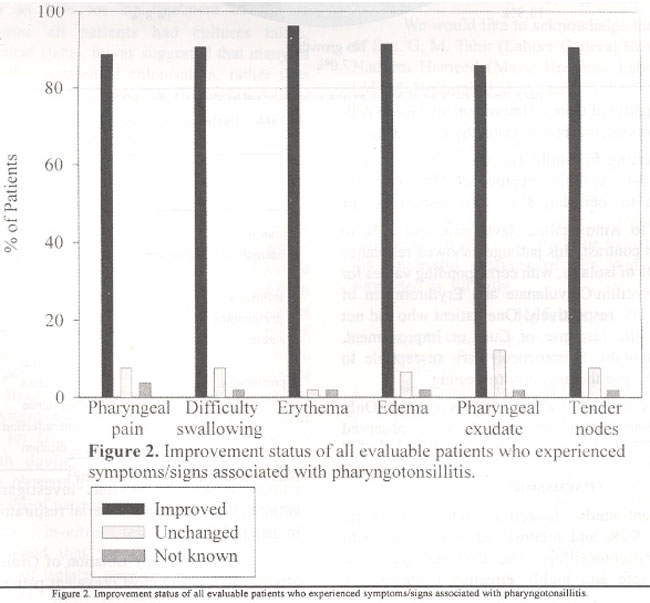 Among all bacteria isolated pre-therapy, Group A ß­haemolytic Streptococci was the most prevalent pathogen (occurring in 45% of patients), followed by Streptococcus pneumoniae (14% of patients) and Staphylococcus aureus (10% of patients). Other isolated bacteria included H influenzae, M catarrhalis and K pneumoniae. Normal flora and no growth constituted 15% and 7% of isolated pathogens, respectively. Unidentified pathogens accounted for 5% of those isolated (Figure 3). 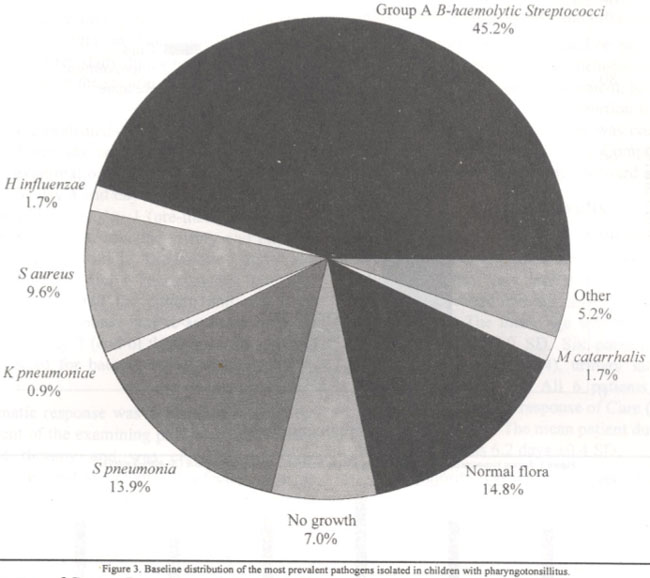 Bacteriological response to cefaclor was assessed at end of therapy, with the results for all bacteria isolated displayed in Table 1. 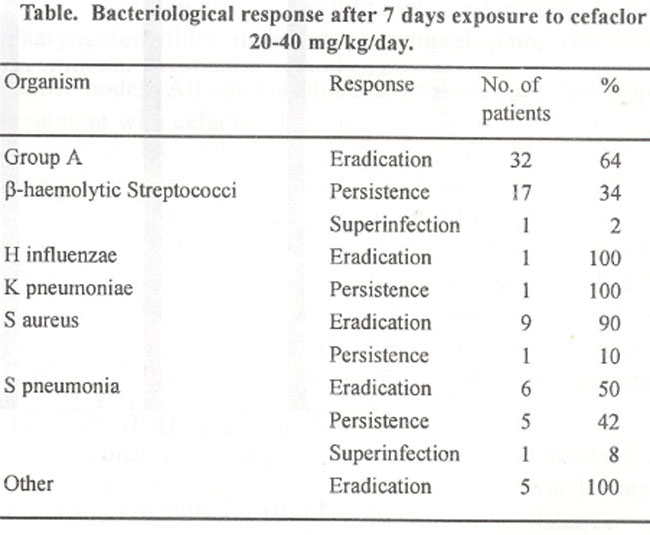 The present study showed a high symptomatic response rate of 99% and minimal adverse events with cefaclor in pharyngotonsillitis. The data indicated that cefaclor was a safe and highly effective treatment for pharyngotonsillitis in Pakistani children. Such findings are consistent with a previous investigation in Pakistani children encompassing bacterial respiratory tract infections in general1.
The pre-therapy isolation of Group A B-haemolytic Streptococci as the most prevalent pathogen in the current investigation suggests this pathogen may be a primary cause of pharyngotonsillitis in Pakistani children. Group A ß­haemolytic Streptococci have been identified as a common pathogen for this infection1,2 and constitute the focus of a number of previous treatment-related investigation11,12. While the trend for predominance of this pathogen was also found by Najam et al. in a study of Pakistani children with respiratory tract infections reported generally, the magnitude was greater in the current investigation where the pharyngotonsillitis infection was isolated. This finding highlights the need for treatment, especially given the risk of subsequent rheumatic fever and acquired heart disease in this population7. Other bacteria isolated pre-therapy, including Streptococcus pneumonia and Staphylococcus aureus, are consistent with that previously reported in Pakistani children1.
While the symptomatic response was high in the current study, the bacteriological response of 67% eradication of all pathogens isolated was somewhat lower than that reported in similar previous investigations with high symptomatic response rates1,13. In contrast, a European study reported a bacteriological response to cefaclor as low as 50% for the treatment of chronic bronchitis14. Since all patients had cultures taken, regardless of clinical status, it was suggested that many of the culture growths represented colonisation, rather than true infection, thus, falsely lowering the bacteriological response rate14. In the current study, a discrepancy was found between the observed symptomatic response rate and the bacteriological response rate, No systematic pattern, however, was seen among individual patients that could help explain this discrepancy. In a number of patients with symptomatic improvement, pathogenic isolates were present at both pre- and end of therapy cultures, A number of patients determined by the investigating physician to have a symptomatic response of cure showed normal flora or no growth prior to therapy but their throat cultures revealed presence of pathogenic organisms at end of therapy. In addition, one culture report showed eradication, even though the patient was considered by the physician to be symptomatic. Interestingly, it has been shown that throat cultures for pharyngitis can be misleading, with inconsistent growth patterns for Group A ß-haemolytic Streptococci being seen with duplicate cultures15. Based on this information, the observed result from the present study which shows persistence of Group A ß-haemolytic Streptococci in 33% of patients must be viewed with care.
Pre-therapy in-vitro testing for antibiotic susceptibility showed that for Group A ß-haemolytic Streptococci, 37% of isolates were susceptible to cefaclor, Susceptibility was less favourable for Pencillin.
Amoxycillin/Clavulanate and Erythromycin. The resistance to cefaclor of Group A ß-haemolytic Streptococci was greater than 50%. Despite these results, the extrapolation of such findings to patient treatment in-vivo would be difficult. It has been shown that in addition to the infecting organism and the antibiotic, other factors including, antibiotic concentration at infection site, host defence mechanism recruitment and antibiotic pharmacokinetic properties, impact the expected outcome in-vivo16, As such, the results described above for the in-vitro testing should be considered with caution.
The safety data from the current investigation align with data summarised from over 12,000 patients worldwide, where cefaclor was noted for minimal side effects and normal body flora impact.17

In conclusion, based on the high symptomatic response rate of 99% and the positive safety data, cefaclor was found to be effective and safe in treating Pakistani children with pharyngotonsillitis.