Objective: Presentation of kidney tumor patients in-group gave birth to the hypothesis that oncogen exposure is influenced by the weather. Frequency and spectrum of renal tumors was also studied. Incidence of the tumor cannot be evaluated as we are lacking in data collection of pediatric population, inoperable cases and patients with bilateral renal tumors, who did not under go nephrectomies.
Subjects and Methods: Case records of all patients who underwent nephrectomy at the Department of Urology, Pakistan Institute of Medical Sciences (PIMS), Islamabad, between 1988 and 2000 were retrospectively analyzed. Histologically proven cases of renal cancer seen over 13 years period under review, were included in the study.
Results: Between 1988 to 2000, 80 histologically proven cases of renal carcinoma were seen. The ages of the patients ranged from 10 to 80 years (median 55 years) with a male to female ratio of 2:1. The frequency of kidney tumor in different months was evaluated. Spring and end of summer season showed increase number of kidney tumor patients 27.50% and 30% respectively but it is not significant. This is a small study at one center and data from other centers may be conclusive. Histology showed renal cell carcinoma in 86.2%, squamous cell carcinoma in 3.75%, transitional cell carcinoma in3.75%, Wilms’tumor and Non-Hodgkin’s lymphoma in 1.25% each and undifferentiated in 2.5% cases. Invasiveness was found in 16.25% cases, 7.5% had renal vein involvement, 6.25% lymph node and 2.5% inferior vena cava. Side of involvement was right in 51.2% and left in 48.8% cases. Of the total urological malignancies that were seen during 13 years period under review, renal carcinoma was found in 12.4% cases. Of the total nephrectomies that were carried out during this period 24.5% were the cases of renal carcinoma. Hospital frequency of renal carcinoma was 2.28/100,000/year or 6.1 tumors per year.
Conclusion: Impact of weather could not be proved a causative factor for kidney tumor presentation. This study also indicates that although the frequency of renal carcinoma may be different from western countries but the spectrum of the disease is quite similar (JPMA 52:447;2002).

There are specific suspected agents in human renal cell carcinoma which include aromatic hydrocarbons, aromatic amines, aflatoxins, hormones, lead compound, radiations, certain viruses and cigar smoking1. Renal cancer is associated with an increased expression of certain oncogens. Slamon and his collegues summarized the expression of 15 different oncogens in nine renal carcinomas1. Abnormalities along the short arm of chromosome 3(3p 13-14) have been detected in a large proportion of renal carcinomas2. Whether this oncogen expression is relevant with weather or not, we did a retrospective study.
Renal cell carcinoma accounts for 2 percent of all cancers3. Its incidence varies among countries by a factor of twenty among men and by a factor of ten among women, with the highest rates in North Americans and Scandinavians4. It is estimated that there will be >30,000 new diagnosis of kidney cancers and >12,000 deaths from the disease in the United States in 1999g. Approximately 30-40% of patients present with metastatic disease, an additional 30-40% of patients who present with localized or locally advanced disease subsequently develop metastasis6-8. Worldwide mortality from kidney cancers is expected to exceed 100,000 in the year 2000g.
Studies conducted in Saudi Arabia10, Japan11 and India12 showed the comparable percentage of renal cell cancer in their population. In Pakistan, renal carcinoma has been reported in 14.36% cases during the period 1987 to 1997 at Sindh Institute of Urology and Transplantation, Karachi13. Another report from Pakistan Medical Research Council, multi center tumor study revealed malignant kidney tumors in 169 cases during 22 years from 1971 to 1992 at JPMC, Karachi14. Nephroblastoma has been reported in 28.3% of children under 18 years of age, at the Aga Khan University Hospital, Karachi15.
The present study was a retrospective analysis of the cases presented at the Department of Urology, Pakistan Institute of Medical Sciences (PIMS), Islamabad, between 1988 and 2000.The objective of the study was to evaluate the impact of weather on presentation of kidney tumors. We also review all patients confirmed to have malignant renal tumors to find out the frequency and spectrum of the disease in our population. An attempt was made to compare our data with other reported studies.

Case records of all patients who underwent nephrectomy for various reasons at the Department of Urology, PIMS, Islamabad, during the period from 1988 to 2000 were analyzed. Histologically proven cases of renal cancer seen over 13 years period under review, were included in the study. Information about age, sex, number of cases, pattern of pathology, site involvement and invasiveness were recorded. The data was entered in a Data Base Programme and analyzed on Epi Info.

A total of 295 nephrectomies were carried out over a 13-year period under review at the Department of Urology, PIMS, Islamabad. Out of these 80(24.5%) were found to be cases of renal tumors of different pathology. Of the total urological malignancies (642) seen during the period 1988 to 2000, renal carcinoma was found in 12.4%. The year wise frequency distribution of total histologically proven cases of renal tumors is shown in Table 1. 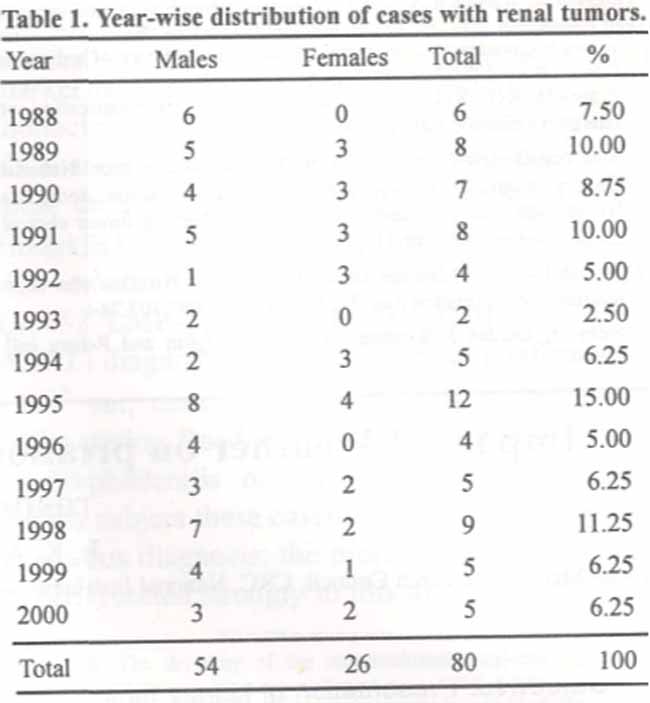 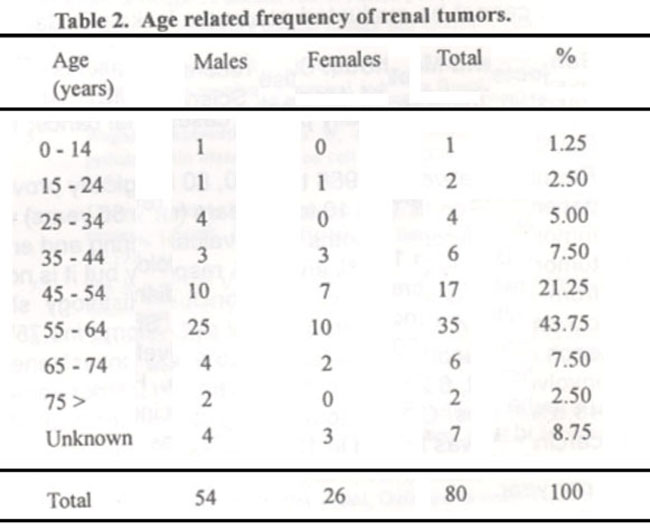 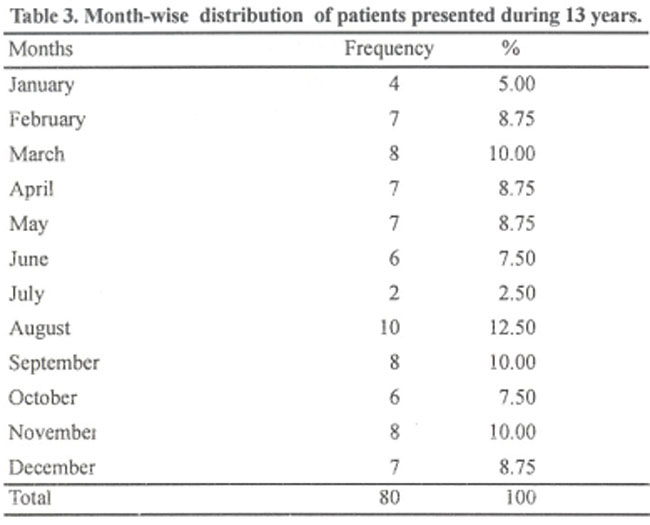 Table 3 shows the month wise distribution of patients presented during the last thirteen years. Maximum number of patients came in the month of August (12.5%) and minimum number in July (2.5%). Seasonal variation of spring and end of summer showed almost equal distribution of kidney tumors i.e., 27.50% and 30% respectively.
Histology showed renal cell carcinoma (RCC) was the most common tumor found in 69 (86.2%) cases, 46 (85.1%) males and 23 (88.4%) females (Table 4). 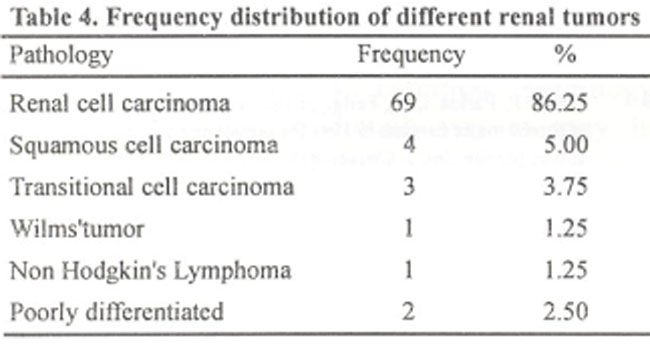 Impact of weather on presentation of kidney tumor was the objective of this study. The present study also shows the frequency and pattern of renal carcinoma as seen during the period 1988 to 2000, at the Department of Urology, PIMS, Islamabad. PIMS is a tertiary care center with patient population representing all the ethnic and socio-economic groups of the country.
Keeping in view that there might be some relation with pollens in the environment we have analyzed our data month-wise. Monthly distribution of patients during the last thirteen years showed maximum ten patients in August and two in the month of July. Admission policy for urocancer patients is based on immediate admission and operation on priority bases. In this way the time interval between presentation and operation never exceeded more than two weeks. So for as the symptomatology is concerned it was not more than one month during the year 1999-2000. We also observed that the frequency of patients with renal tumors was increased during spring (27.50%) and end of summer (30%). But the results do not strongly support our viewpoint. This is a small study at one center. Data from other centers may be conclusive. Therefore, in depth investigations may be carried out to find out any relation of seasons with an increased frequency of patients during a particular period.
Approximately 3.5 million patients visited the hospital out patient department during the 13 years period. The hospital frequency of renal carcinoma as found in the present study is 2.28 per 100,000/year or 6.15 tumors per year, The actual frequency of renal carcinoma in Northern region of Pakistan may be higher because the present analysis is a hospital based study and the patients with renal carcinoma are also admitted and treated in other hospitals of Islamabad and Rawalpindi.
The pattern of malignant tumors in Northern Pakistan has been reported by Armed Forces Institute of Pathology (AFIP), Rawalpindi16. Of the total malignant cases (14018) registered over a period of 12 years (1977-1988) kidney cancer was reported in 1.56% (219) cases with a male to female ratio 2:1, From the Southern region of the country Pakistan Medical Research Council (PMRC) reported malignant kidney tumors in 169 cases including 96 males and 73 females during 22 years from 1971 to 199214. The Sindh Institute of Urology and Transplantation (SlUT), Karachi, reported renal carcinoma in 14.36% (109) and Wilms’ tumor in 1.05% (8) cases of all the urological malignancies (759) that were seen during the 10 years period from 1987 to 199713. These figures reported from Karachi are higher than those found in the present study where renal carcinoma was encountered in 12.4% cases of total urological malignancies during 13 years period. Of the total nephrectomies we found 24.5% cases of renal carcinoma. Similar findings were reported in Saudi Arabia in 22% adult cases who underwent nephrectomy during the 9 years period from 1987 to 199510. A retrospective study from California, USA reported 265 patients with renal cell carcinoma over a 24-year period of time from 1972 to 199517.
In the present study renal cell carcinoma (RCC) was the most common malignancy encountered. A similar experience was reported by others3,9,10,16-18. The male to female ratio of 2:1 found in this study has also been reported from USA (1.85:1)17, Saudi Arabia (1.9:1)10 and Pakistan (2:1)16. As compared to the study from USA17 where median age was 59 years and 17% of patients were above 70 years of age we found median age 55 years and only 2 (2.7%) patients were above 70 years. In Saudi Arabia10 patients were fairly young with mean age of 44 years. In India12 the incidence of kidney cancer was almost absent between the ages of 5 to 35, but later up to the age of 70, it shows a steady increase during the period 1964 to 1993. A study from Pakistan16 reported that among kidney tumors (219) that were seen during 12 years 17.8% cases were in pediatric age group (<15 years) and all of these were Wilms’ tumor. Although we found only one case of Wilms’tumor but it was seen in a 10 years old child, except this case all our patients were adults (20 to 80 years) as we do not deal with children, in this department.
The invasiveness seen in our patients is quite similar with other reported studies16-18. However, we did not find any difference in the side involvement as reported from Saudi Arabia10 where there was slight predominance of right- sided lesions.
Highest incidence rate of renal cell carcinoma has been reported in North Americans and Scandinavians4.
According to cancer registry data, 3307 patients with renal cell carcinoma were diagnosed by 97 Illinois, USA hospitals from 1975 through 198519. The incidence has been rising steadily in the western countries, which is due to improved capability of diagnosis and the causative role of five- year surviva13. Both these trends appear to be due to improved capability of diagnosis and the causative role of environmental factors3,20. The increase has been accom danied by a small but significant improvement in five-year survival3.
Both these trends appear to be due to improved capability of diagnosis. Kidney tumors are detected more frequently by the newer radiological techniques, and at lower stages, when they can be resected for cure18.
In the absence of a centralized tumor registry the true incidence of renal cancer remains unknown in Pakistan, however frequency wise our data is comparable with the similar reported studies with in the country and out side world. It also indicates that although the frequency of renal carcinoma may be different from western countries but the spectrum of the disease is quite similar. A national tumor registry is necessary to collect data on a sufficient number of patients to draw meaningful conclusions regarding the incidence and outcome of these tumors.