Objective: To determine the prevalence of depression in patients with coronary artery disease (CAD) in a tertiary care hospital setting in Pakistan.
Methods: One hundred and fifty four patients of CAD (115 males and 39 females) were randomly selected from the outpatient department and wards of the National Institute of Cardiovascular Diseases, Karachi and were scored for depression via the Hospital Anxiety and Depression Scale. Basic demographic data and disease variables were also collected.
Results: The point prevalence of depression in the sample was 37% (31.3% males and 53.8% females). Female sex, income level below Rs. 5000 per month, low education level, outpatient, single earning family member and hypertension were few variables associated positively with depression (p<0.05). Only one patient was receiving treatment for depression by his cardiologist.
Conclusion: Depression is prevalent in CAD patients in Pakistan. Economic conditions may pose an additional threat on these patients. Treating physicians (especially cardiologists) need to be aware of this co-morbidity so as to be able to diagnose and adequately manage such patients. (JPMA 52:436; 2002).

Patients were randomly selected from the wards and Outpatient Department of the National Institute of Cardiovascular Diseases, Karachi Pakistan. All of them filled a questionnaire which asked for basic demographic data (name, age, gender, education level, ethnicity and marital status), fmancial status (monthly income, whether earning or not, nature of job and number of earning family members), any co-morbid illness (Diabetes Mellitus, Hypertension, Renal failure, Stroke and Hyperlipidemia) and relevant disease variables (type of disease, its duration, number of attacks, use of medications and history of Percutaneous Transluminal Coronary Angioplasty or Coronary Artery Bypass Grafting). One question asked patient’s opinion whether the disease was responsible for bringing about changes in his/her behaviour.
The Urdu version of Hospital Anxiety and Depression Scale (HADS) was used as the screening tool for depression18. This questionnaire has been used previously for research purposes1. In addition, it is the only such tool that has been validated in Urdu19, which is the national language of Pakistan.
All those patients who had been diagnosed to be depressed ever in there lives or were taking anti-depressants prescribed by the psychiatrist or whose first-degree relative had died within the last six months or had any other reason to be depressed were excluded from our sample. These questions were verbally asked from every patient before administering the HADS questionnaire. However, anyone who was receiving anti-depressants from his/her cardiologist was included in the study assuming that the cardiologist had diagnosed the patient as depressed and that patient was considered a case.
Where appropriate, unpaired t-tests, ANOVA and chi-square tests were employed for statistical analysis. A p-value of less than 0.05 was considered as significant.

Data for one hundred and fifty four patients (115 males and 39 females) was analyzed. Basic demographics of the sample are given in Table. 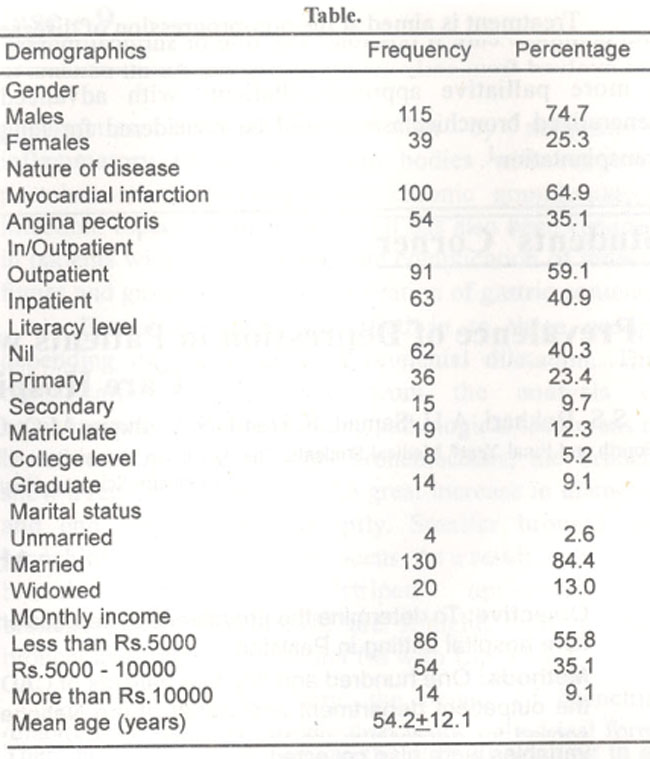 a) Prevalence of Depression
The overall prevalence of depression in the sample 37% (57 out of 154 patients). The prevalence in males 31% (36 out of 115 patients) whereas that in females 54% (21 out of 39). The difference was statistically was significant.
b) Depression and Demographic variables
Females scored higher on HADS as compared to males (mean score for females 10.6 ± 4.1; for males 8.3 ± 4.6:p value for unpaired Students’ t-test = 0.004). Similarly, the proportion of depressed among females was significantly higher than males. As far as the status of patients was concerned, outpatients differed significantly from inpatients. Outpatients had higher HADS scores as compared to inpatients (outpatients 9.71 ± 4.2; inpatients = 7.63 ± 4.4: p-value for unpaired Students’ t-test 0.005). The sample was also heterogeneous when the data was stratified with respect to the literacy level and prevalence of depression was compared in each group. Quantitative analysis showed that HADS scores were higher for patients with lower literacy level and vice versa (Figure). 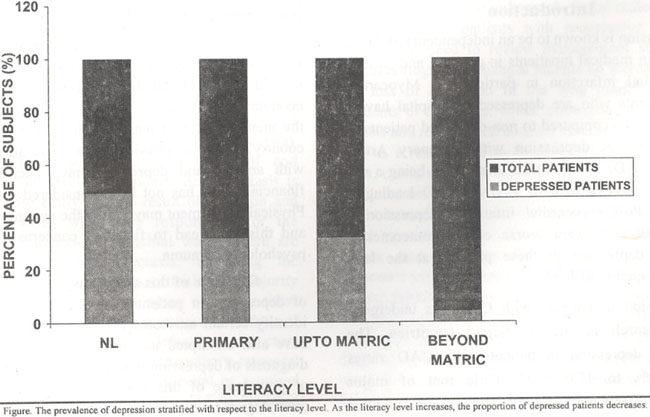 c)  Depression and Socio-economic variables
There was a significant difference in the proportion of patients with depression between income level below Rs. 5000 per month and those above Rs. 5000 per month. Those patients with a monthly income of Rs. 5000 or less had significantly higher scores on the HADS as compared to those who earned more than Rs. 5000 per month. The mean HADS score for income group of less than Rs. 5000 per month was 10.06 ± 4.3 whereas for group with income greater than Rs.5000 was 7.35 ± 4.5). Similarly, number of earning family members was also associated with the HADS scores. The mean HADS score for the group of patients with only one earning family member was 9.72 ±4.5; for the group of patients with two earning family members was 7.87 ± 4.8 and that for the group of patients with greater than two earning family members was 6.72 ±4.0 (p-value for ANOVA = 0.0073).
d)  Depression and Medical Co-morbids
Medical co-morbids such as Hypertension, Diabetes Mellitus, Hyperlipidemia, Stroke and Renal Failure were also studied. Those who had hypertension had higher scores on HADS (9.56 ± 4.4) as compared to those who did not had Hypertension (7.71 ± 4.6). However, the proportions of depressed patients in both the groups was not significantly different. Diabetes Mellitus was not found to be associated with depression in the patients. Similarly, hyperlipidemia also had no correlation with depression. The number of patients with Stroke and renal failure were too small to allow a meaningful comparison and therefore these co­morbids were not analyzed.
e) Depression and other variables
Type of disease (viz. Myocardial Infarction or Angina Pectoris) and duration of the disease were not associated with any increased risk of depression. Similarly, smoking status did not seem to have any effect on the prevalence of depression. However, depressed patients were more likely to associate there disease with behavioral changes. Those who associated CAD with (or held CAD responsible for) behavioral changes in them scored higher on HADS (10.23 ± 4.3) as compared to those who did not believe so (6.69 ± 4.4. The use of beta-blockers was associated with increased risk of depression but it failed to reach significance.
f) Treatment of Depression
Of all the one hundred and fifty four patients recruited in our study, twenty (13%) did not know the medications that they were taking. Out of the remaining 134 patients, only one patient was being treated for depression by his Cardiologist.

In Pakistan, especially the cosmopolitan areas, cardiovascular disease has become a notorious player of the health arena, contributing significantly to the disease burden20. The prevalence of depression in CAD population of Pakistan, as shown by our study, is somewhat similar as compared to the Western data21. Thus, depression is equally rampant in CAD population of Pakistan and therefore deserves special attention.
The attributes that were found to be significantly associated with depression in our study were female sex, lower level of education, outpatient, a monthly income level below Rs. 5000 and those with only one earning family member. Thus, in a developing country like Pakistan and especially in the low-income population, financial considerations may play a role in the genesis of depression in CAD patients. Those patients who believed that their disease was responsible for changes in their behavior also had higher prevalence of depression as compared to those who did not believe so. Although patients with a history of Hypertension scored significantly higher on HADS (p 0.0 15), the chi-square test of homogeneity failed to reach        guidance in making this study possible.
significance (p = 0.23). Thus, hypertension as a risk factor for development of depression in CAD population needs to be investigated in greater detail.
Another intriguing fmding of our study was the under diagnosis of Depression in CAD patients by the cardiologists in our setting. Whereas the impact of depression on CAD patients is now well established and there have been a few articles in the local journals as well22, obviously the awareness has not been translated into practice.
There are a few limitations in our study. A good part of the sample could not read at all. Therefore the whole questionnaire along with all choices was narrated to them and they were asked to choose any one. However, this introduces an element of interview bias in the study. Out of the total sample of 154, there were 20 patients who did not know or could not recall the names of the medications that they were taking. Some of these patients could be receiving anti-depressants without having to know about it. But considering the fact that only one patient out of the remaining 134 patients was receiving anti-depressant, this would not appear to be a major factor.
In conclusion, our study is the first one to provide baseline statistics for Pakistan as regards depression in CAD patients. We have also correlated depression with a number of variables of the population, which could be used to identify high-risk patients in a clinical setting. We have also shown that economic and financial concerns may play a major role in the genesis of depression in CAD patients, a fact that has not been studied previously. Hypertension may prove to be an important risk factor, however, it needs to be studied in detail.. We have also shown that underdiagnosis of depression in patients with CAD is a problem in Pakistan that needs to be addressed by bringing about awareness in the treating physicians.