Objective: To study the risk factors, etiology and management of ischemic stroke in young adults in a South Asian population.
Methods: Retrospective study conducted at a large tertiary hospital in Karachi. One hundred and eighteen patients between fifteen and forty-five years admitted over a five year period with a diagnosis of ischemic infarct constituted the study population. The study variables included the full clinical spectrum, spanning historical, laboratory, radiological and outcome parameters.
Results: Forty-three percent of patients were hypertensive and 30% were diabetic. The combination of diabetes and hypertension was found in 19.5% of patients, intra-cranial and carotid artheroscierosis in 22% and embolism in 11% of the cases. The in-hospital mortality was 11%. The outcome was excellent in 27%, good in 50% and poor in 23% of patients.
Conclusion: The risk factors for artherosclerosis and the contribution of intra and extra-cranial artherosclerosis were found to be much higher than those from the Western Hemisphere (JPMA 52:417;2002).

Ischemic stroke in young patients constitutes about 5% of all strokes1-3. The incidence varies from 11 to 20/100,000 in different studies4,5. During the past decade several studies have been carried out to define the clinical patterns and etiology of stroke in young patients, with strikingly different results. The main reasons for this wide variation include geographic differences, new diagnostic tools like trans-esophageal echocardiography and previously unknown etiologies such as anti-phospholipid antibody syndrome and disorders of inter-atrial septum3,5.
An increasing number of studies have described the patterns of stroke in young Caucasian population1,4. Some of these studies have concentrated on investigation of incidence and others on the etiology of ischemic stroke in young patients. Very few articles have presented the full spectrum of disease in a single paper. Another reason for studying stroke in young adults is the lack of such data for the young population of South Asia. The population belt of Pakistan, India and Bangladesh is known to be homogenous, but unique in terms of demographic patterns and risk factors for cardiovascular disease5. This study was undertaken to define the risk factor profile, etiology and management outcomes of this disease in a developing country setting.

The study was conducted at the Aga Khan University Hospital, a private, tertiary care health center in Karachi, Pakistan. We retrospectively reviewed the medical records of all patients aged 15-45 years admitted with a diagnosis of ischemic stroke between November 1, 1992 to October 30, 1997. A total of 118 cases met the inclusion criteria. In all cases the diagnosis was established by excluding intracranial hemorrhage on the basis of computerized tomographic (CT) scan.
The study variables included data obtained from history and physical examination, results of laboratory and radiological investigations and outcome data. The historical data included information regarding age, gender, hypertension, diabetes, dyslipidemia, smoking, alcohol abuse, migraine and family history of ischemic heart disease. The radiologic investigations included carotid doppler, echocardiography, CT and MR scans and cerebral angiography. The laboratory investigations included hematocrit, sedimentation rate, anti-nuclear antibody, rheumatoid factor, anti-cardiolipin antibody, serum cholesterol and triglycerides. The outcomes data focused on duration of hospital stay, outcome at discharge and last outpatient follow-up. Due to the retrospective nature of the study, information on all of the above variables was not available in every case. Investigations were ordered by the treating physician on a case-by-case basis and tailored according to the diagnostic probabilities in each individual patient. Statistical analysis was carried out using the Statistical Program for Social Sciences.

A total of 118 patients aged 15-45 years were admitted with a diagnosis of ischemic infarct over a five year period. They comprised 5% of 2,589 patients of all ages, admitted with a diagnosis of ischemic stroke during this period. The mean age of the group was 38 years. There were 76 males (64%) and 42 females (36%). About three quarters of the patients were in the 3 5-44 year age group. The rest were equally distributed among the 15-24 and 25-34 year age group.
The main risk factors for atherosclerosis in these patients were hypertension, diabetes and smoking. The neurological deficits were hemiplegia or hemiparesis, speech dysfunction and cerebellar dysfunction (Table 1). 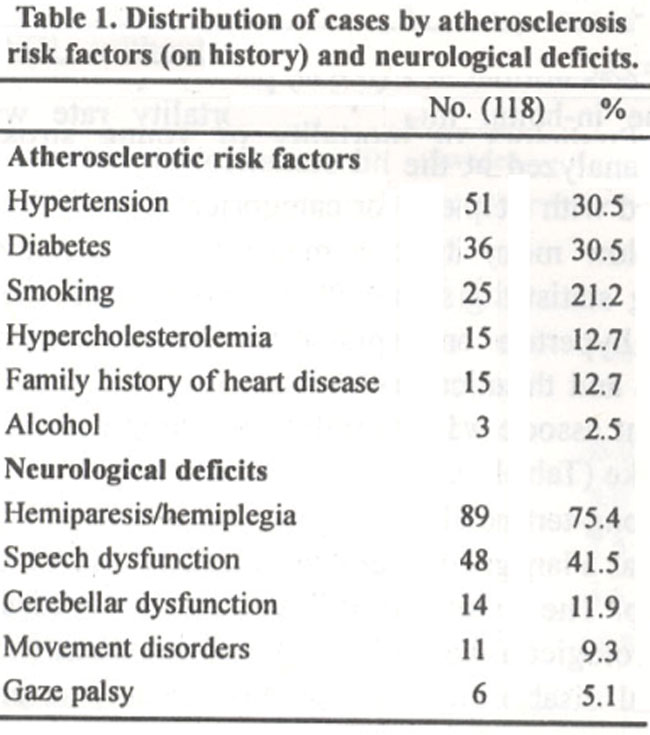 Investigations were ordered on a case-by-case basis. Therefore of the 118 cases included in the present study only 56.8% (n=67) underwent surface echocardiography and 38% (n=45) carotid doppler examination (performed with Toshiba triplex ultrasound scanner, which combines B-mode with color flow doppler). Of the 67 cases who underwent surface echocardiography, 51 (76%) cases showed no abnormality while the remaining cases had left atrial enlargement, valvular vegetations and wall motion abnormalities (Table 2). Of the 45 cases in whom carotid doppler was performed, 31(68.9%) patients had a normal scan. Varying degree of stenosis or ulceration of the carotid artery was found in 11 cases and information regarding degree of stenosis was not available for 3 of the 14 patients (Table 2). 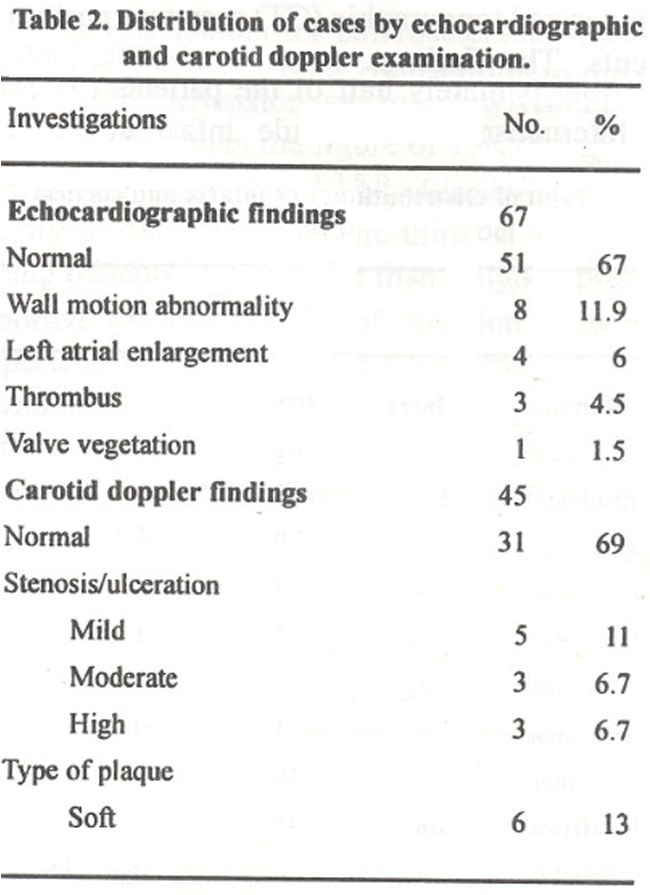 Laboratory investigations showed hyper­cholesterolemia in 18.8% and raised triglycerides in 19.6% cases. Of the 41 patients tested for presence of anti­cardiolipin antibody, a positive test was obtained in 9.7% cases.
The probable etiologies identified in 118 patients on the basis of physician diagnosis are summarized in Table 3. 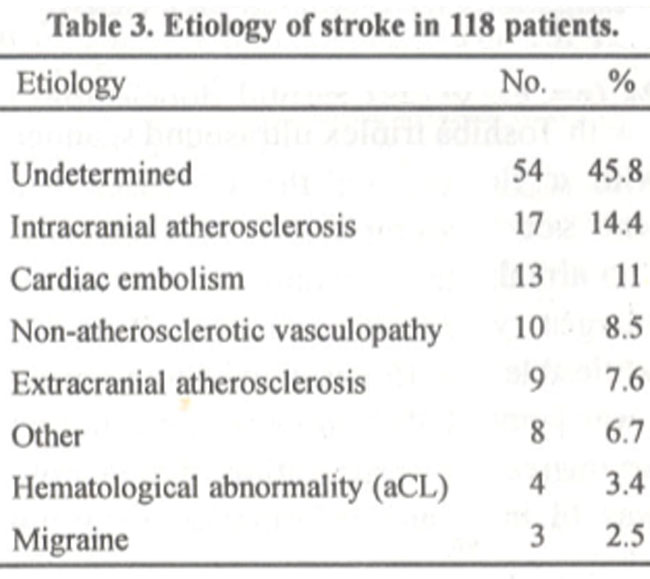 Seventeen (14.4%) patients were diagnosed to have probable intracranial atherosclerotic vasculopathy and 9 (7.6%) extra-cranial (carotid) atherosclerosis. Other etiologies included cardiac embolism, hematological abnormalities and migraine. In 54 (45.8%) etiology could not be determined. Other etiologies such as oral contraceptives and lacunar infarct accounted for six (5%) cases as shown in Table 3. Computerized topographic (CT) scan was performed in 108 patients. The findings are presented in Table 4. 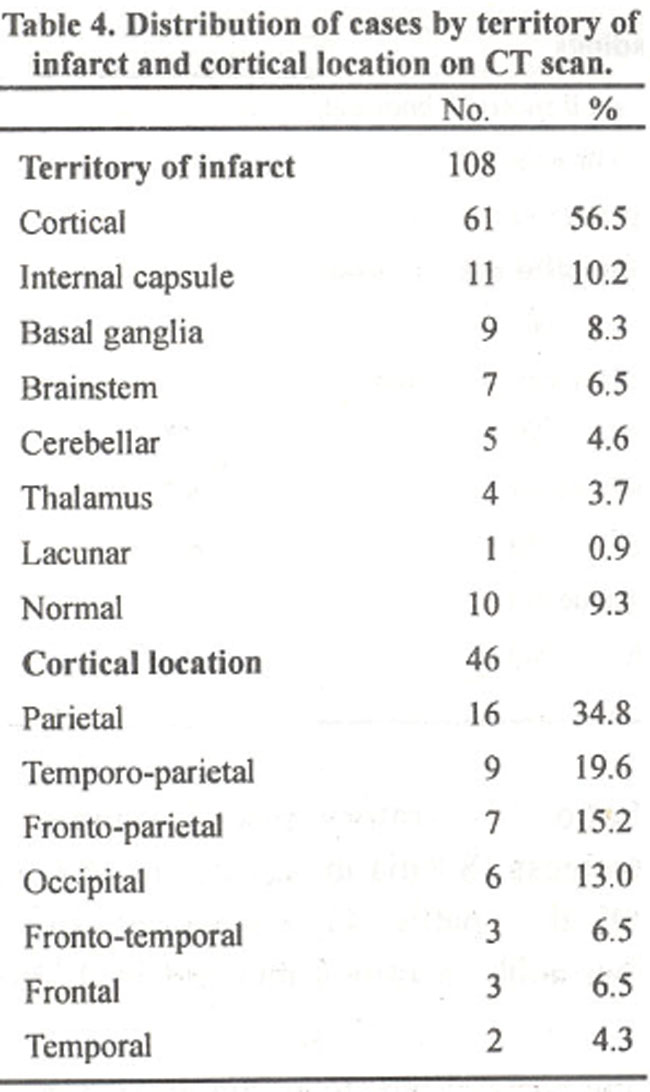 Approximately half of the patients (5 1.7%) had a cortical infarct. Internal capsule infarcts were found in 10.2% (n=11) and basal ganglia infarcts in 8.3% (n=9) and 11% (n=12) had posterior circulation infarcts. Information about size of infarct was available in 35 patients. Infarct size was categorized as small (<1.5 cm), medium (1.5-3 cm) and large (>3 cm). Small sized infarcts were found in 34.3% (n12), medium in 20.0% (n=7) and large in 45.7% (n16) of the cases. The pattern of lobar involvement was studied in patients undergoing CT scan. Information regarding lobar involvement was available in 46 patients. The largest number of infarcts were found in the parietal region (34.8%), followed by temporo-parietal, fronto-parietal, occipital, fronto-temporal, frontal and temporal (Table 4).
MRI scan was performed in 30 patients. Cerebral angiography was performed in only one patient due to fmancial constraints and was correlated with the high grade stenosis found on ultrasonography. The MR scan picked up a higher proportion of posterior circulation infarcts (Table 5). 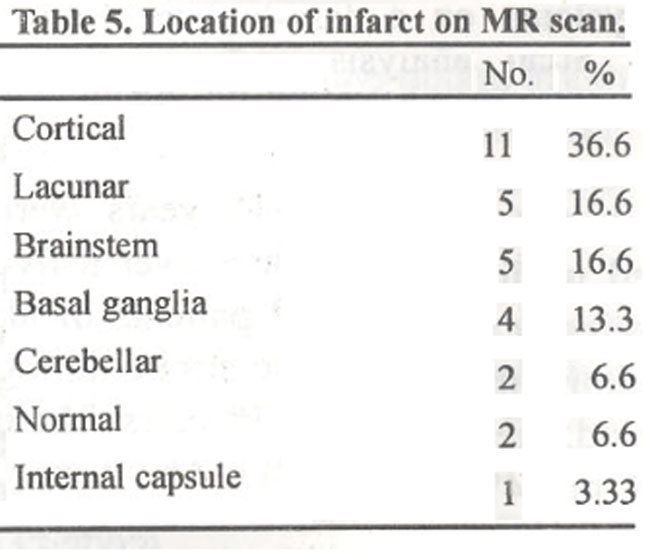 Cortical territory involvement sparing the deep structures was found in 11(36.6%) and lacunar infarct in 5 (16.6%) patients. The remaining patients had internal capsule and basal ganglia involvement. None of these patients had a thalamic infarct on MR scan. The MR scan was normal in 2 (6.6%) patients (Table 5).
The in-hospital mortality rate was 11% (n13). Predictors of mortality of young stroke patients were analyzed at the bivariate level and statistical significance was tested with the help of tests for categorical data (Table 6). The low mortality could be a major reason for not achieving statistical significance with regard to variables such as hypertension and dyslipidemia. The movement disorders and the location but not the size of infarct were significant associated with the mortality in young patients with stroke (Table 6). 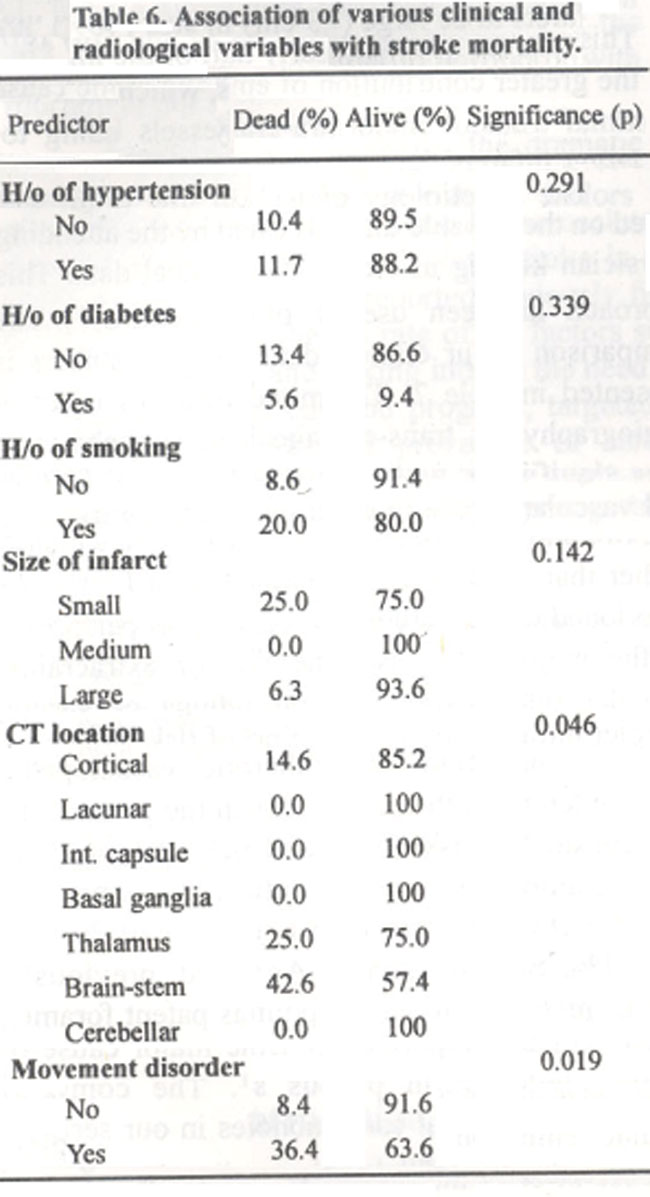 Long-term follow-up was available in about half the patients, as a large proportion of rural population was lost to follow-up. The mean duration of follow-up was 44 days. The neurological outcome on follow-up was excellent (no functional disability) in 15 (27%) patients. Twenty-seven (49%) patients had a good outcome (mild neuro deficit but not requiring assistance with activities of daily living, ADL) and 13 (23%) were unable to carry out ADL without assistance (poor outcome). 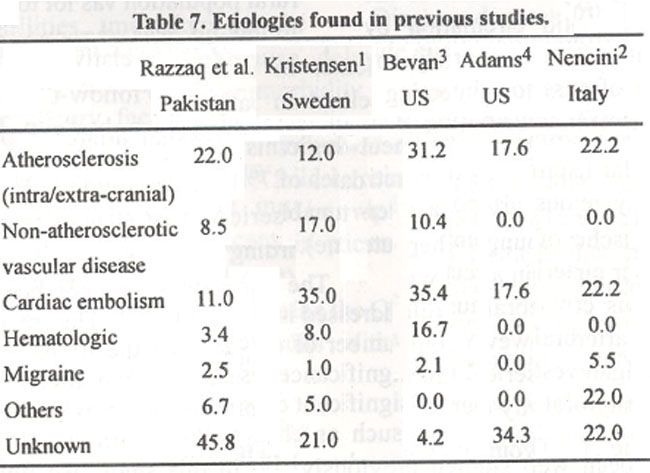