An eleven year old boy presented with one month’s history of fever and weight loss. He was diagnosed with Acute Mycloid Leukemia (AML-M2). During treatment he developed recurrent infections with neutropenia requiring prolonged antibiotics and subsequently developed invasive aspergillosis. He was treated with amphotericin B and Voriconazole. This case shows the efficacy and safety of combined antifungal therapy, including voriconazole, for invasive aspergillosis complicating AML.

Haematological malignancies are associated with many opportunistic infections of which invasive aspergillosis (IA) represents an important devastating fungal infection.1 IA complicates 5-29% of the cases of Acute Mycloid Leukemia (AML) and the risk is correlated with the degree of Immuno-suppression which depends on the disease itself and the subsequent chemotherapy.1-31-3 IA remains a diagnostic and therapeutic challenge for any physician. Despite advanced diagnostic modalities which allow earlier diagnosis and aggressive intervention, the mortality rate remains unacceptably high that is 50-70%.2,3 Previously various Anti-Fungal therapeutic agents have been used to treat IA in patients with haematological malignancies including Intravenous amphotericin B deoxycholate (D AmB), Liposomal Amphotericin B (L AmB), Itraconazole, but the outlook for the patients remained dismal.3 Voriconazole is a triazole derivative which has been used frequently due to its potency, broad spectrum activity, clinical efficacy, safety and tolerance.4,5 In the past decades D AmB was the standard therapy, but it was associated with a poor outcome. Numerous case series and randomized control trials have shown that Voriconazole is superior to amphotericin B in the treatment of IA and is now considered the First line therapy in many treatment centers.6 Here we present a case of AML-M2 complicated with invasive aspergillosis being treated with Voriconazole.

On fifth day of induction he developed febrile neutropenia for which cultures were sent and he was started on broad spectrum antibiotics. He was also evaluated by cardiologist and was prescribed furosemide and enalapril.
After achieving bone marrow remission he received 2nd Induction. During this admission he developed fever on 3rd day and blood cultures grew salmonella paratyphi for which he received IV meropenem, amikacin with amphotericin as empiric for fever/neutropenia. Echocardiogram done at this time revealed vegetations on right coronary sinus. A repeat blood culture grew Enterobacter species sensitive to meropenem. Once his counts recovered he was discharged on IV meropenem for a total of 3 weeks.
Course three was tolerated well with no need of prolonged admission. After 4th cycle he developed febrile neutropenia with redness and pain at portacath site and blood culture grew staphylococus aureus, thus portacath was removed. He was treated with meropenem, vancomycin, amikacin and amphotericin but fever did not subside. Serial Chest X-rays (CXR) revealed bilateral pneumonia with pneumatocele formation. Follow up CT scan (Figure-1) 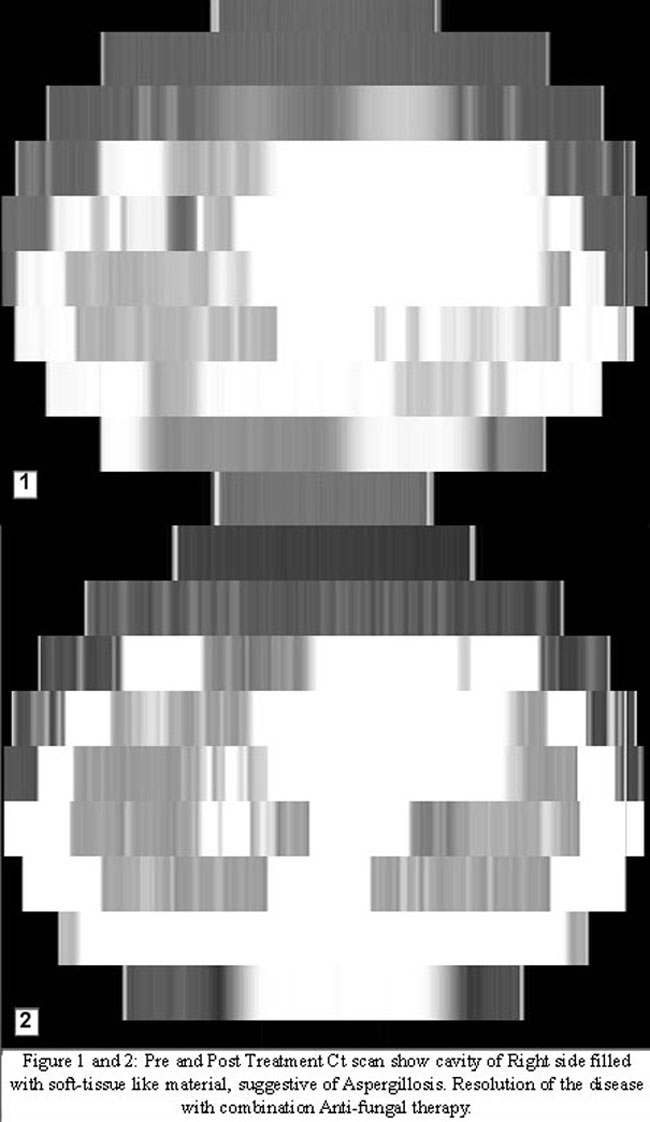 demonstrated multiple bilateral cavities in lungs filled with soft-tissue material. Ill-defined low attenuating areas were also noted in segment 4 and 6 of liver and both kidneys. Appearance was suggestive of Aspergillosis.  After consultation with infectious disease team he was continued on amphotericin with addition of voriconozole. He was discharged on oral Voriconazole after counts stabilized and fever settled.
He was admitted again in January with abdominal pain and was diagnosed as a case of acute appendicitis, and underwent appendicectomy. Repeat CT scan (Figure-2) revealed complete resolution of fungal balls in the lung cavities but not in the renal lesions. He was then advised IV amphotericin 1mg/kg every other day together with oral Voriconazole and discharged.
He completed his full course of ampotericin B (3 months) and Voriconazole for 6 months in June 2007. Repeat CT showed resolution of chest and abdominal lesions on scan. He has been off therapy and doing well for more than a year after completion of therapy for AML-M2 with multiple life threatening events like infective endocarditis, Staph aureus sepsis and invasive aspergillosis.

Invasive aspergillosis (IA) is a frequently encountered infection in AML patients undergoing induction chemotherapy. IA in children is associated with mortality ranging from 68% to 77% as compared to other Invasive Fungal Infections.7 Studies directed at Paediatric oncology patients show a protean 15-34% survival rate.1,8 Exclusion of Haematopoietic Stem Cell Transplantation (HSCT) recipients improves the survivorship to 82% due to prolonged immunosuppression associated with HSCT. Both acute infection and relapse are particularly associated with severe neutropenia, use of broad-spectrum antibiotics or high-dose corticosteroids. Due to the fact that causative factor may remain viable in the initial lesions, IA patients have a higher risk of reactivation of the infection with further chemotherapy. Patients with acute leukaemia and a history of previously treated IA on additional chemotherapy are at a risk of approximately 50% for recurrent invasive aspergillosis. Due to the higher benefit risk ratio it is universally accepted that IA is not an absolute contraindication for further chemotherapy.9
Invasive aspergillosis remains a diagnostic challenge especially in paediatric population due to non-specific clinical signs. The physician should have a high degree of clinical suspicion when dealing with febrile patients on chemotherapy.10 However, diagnosis often remains difficult as most of the diagnostic tools in clinical use at present either lack specificity or acceptable sensitivity in the early phase of the infection. Radiological imaging remains the corner stone with the "halo" sign and "crescent sign" on CT scan being regarded as diagnostic for invasive pulmonary aspergillosis (IPA). In febrile neutropenic patients systematic CT scans allow earlier diagnosis of IPA.11 Definitive diagnosis however depends on tissue biopsy, which is precluded by the degree of cytopenia and coagulation abnormalities in such patients.
Antifungal therapy remains the mainstay of treatment for invasive aspergillosis.12 But the combination of antifungal treatment and surgical resection has shown to dramatically improve the prognosis of IA. Aggressive surgical resection has been associated with improved outcome by eliminating macroscopic foci of IA that could complicate subsequent immunosuppressive chemotherapy but because IA is a multifocal disease at microscopic level, there is no guarantee of complete cure with surgery. The risk of leukaemia relapse or presence of multiple and bilateral lesions makes the surgery impossible. Thus secondary antifungal prophylaxis is the main option in these patients.13
Treatment of IA in the last decade resolved around different formulations of Amphotericin B. But prolonged use of amphoB therapy is limited by nephrotoxicity. LipoAMB permits extended therapy due to reduced renal toxicity.14 Itraconazole may be effective in the treatment of microscopic IA and may prevent recurrence of clinical infection. Despite the introduction of lipid formulations of AmB, about 50% of patients with aspergillosis will fail primary therapy.3
In our case, Voriconazole was used together with Amphotericin as combination therapy in a patient with AML and Invasive Aspergillosis not responsive to ampho B therapy alone. Voriconazole was well tolerated in the patient with no visual hallucinations or hepatotoxicity. This case highlights that patients with AML complicated with Invasive Aspergillosis (IA) may complete their chemotherapy treatment and remain in remission with initial aggressive intravenous therapy following ambulatory treatment with oral voriconazole.