Objective: To determine the prevalence of major risk factors including dietary modification, Body Mass Index (BMI), Blood Pressure (BP) and physical activity in medical students of government teaching hospitals of Karachi.
Methods: A cross sectional study was conducted on students of Dow Medical College, Karachi, Pakistan through a structured pre-tested questionnaire. Non-probability purposive sampling was used. Smoking, hypertension, family history of cardiovascular disease (CVD), overweight and low physical activity levels are risk factors the presence of which can lead to development of CVD. Prevalence of these risk factors was determined by asking appropriate questions and through measurement of BMI and blood pressure for overweight and hypertension respectively. Awareness of risk factors was determined through knowledge of the effect of various food substances on development of CVD and of adoption of dietary changes keeping in mind the risk of developing CVD. SPSS 16.0 was used for statistical analysis.
Results: A total of 132 medical students were included in the study of which 57 (43.2%) and 75 (56.8%) were male and female respectively with mean age of 20.85 ± 1.21 years. About 15.9% of students had elevated blood pressure i.e. > 140/90 mmHg. Twenty eight percent of the total students were found to be underweight and 17.4% were overweight, 5% had some history of CVD, 56.8% had family history of CVD, 9.4% were smokers and 29.5% had high physical activity level. About 87.1% had modified their diet for preventing CVD. Most of the students had adequate knowledge about the cardiovascular risk factors
Conclusion: Majority of students were not overweight. A high prevalence of cardiovascular risk factors; family history and elevated blood pressure was present. Awareness in terms of knowledge was satisfactory but implementation in terms of diet modification and adequate physical activity was lacking (JPMA 60:970; 2010).

Cardiovascular diseases (CVD) are a leading cause of death worldwide.1 A significant fraction of deaths and disability from cardiovascular diseases (CVD) occur in low- and middle-income countries.2 Countries such as India, Pakistan, Bangladesh, Sri Lanka, and Nepal comprising 20 per cent of the world\'s population have a very high prevalence of CVD.2
The high burden of CVD in developing countries is attributable to urbanization and higher risk factor levels (such as obesity, diabetes, dyslipidaemia, hypertension, etc).3 The relatively early age at which these risk factors manifest, large population size, and the high proportion of young adults in these countries results in increased, morbidity and mortality of CVD.3
The risk factors for cardiovascular disease can be categorized into independent or non-modifiable risk factors and dependent or modifiable risk factors. Independent risk factors include age, male gender and family history. Dependent factors of the 1st grade include smoking, hypertension, lipid disorders, and diabetes, while dependent factors of the 2nd grade include overweight, improper dietary habits and stress.4
Pakistan, like other South Asian countries has a higher prevalence of CVD risk factors as compared to other parts of the world.5
Smoking, hypertension, diabetes, abdominal obesity, psychosocial factors, consumption of fruits, vegetables, alcohol, and regular physical activity are major factors that determine the risk of CVD.6 Consumption of fruits and vegetables, alcohol consumption in small amount and physical activity are major cardio-protective factors.4,6
It has been observed that one of the most effective methods of combating the epidemic rise in cardiovascular diseases is to increase awareness about the risk factors and the adoption of healthy lifestyle modifications for disease prevention. Healthcare professionals play a vital role in creating awareness. Medical students of today will be the healthcare providers of tomorrow. Their perceptions regarding prevention of diseases will strongly motivate the future clinical practice.7 It is well known that dietary modification along with control of weight and blood pressure among other factors are important determinants of cardiovascular risk. It is therefore, important to determine the prevalence of these factors and lifestyle practices of medical students.
This study was conducted to determine the risk factors in medical students of the Dow Medical College, Karachi.

A cross-sectional study was conducted from August to December 2008 at Dow Medical College Karachi. The target population for the survey was all medical students enrolled in the MBBS programme at the Dow Medical College. Non-probability purposive sampling was used. Written consent was taken from all participants. The data was collected through a structured self-administered questionnaire designed by the investigators based on a review of similar studies. The study was approved by the Ethical Review Board of Dow University of Health Sciences.
The questionnaire included sociodemographic data, family history of CVD, diet modifications, smoking habits, alcohol consumption, and knowledge regarding body mass index (BMI), obesity and hypertension. Diet modification was defined as change in food consumption on the basis of the role of that particular food in the development of cardiovascular disease. The options that were given in the questionnaire to select from included: additional intake of food product that was not previously included in the diet or increase in consumption of food product already being consumed due to its beneficial role in prevention of CVD, decrease in consumption or complete stoppage of consumption of food products already being consumed and no change in consumption. The different food products that were inquired about are given in Table-1. 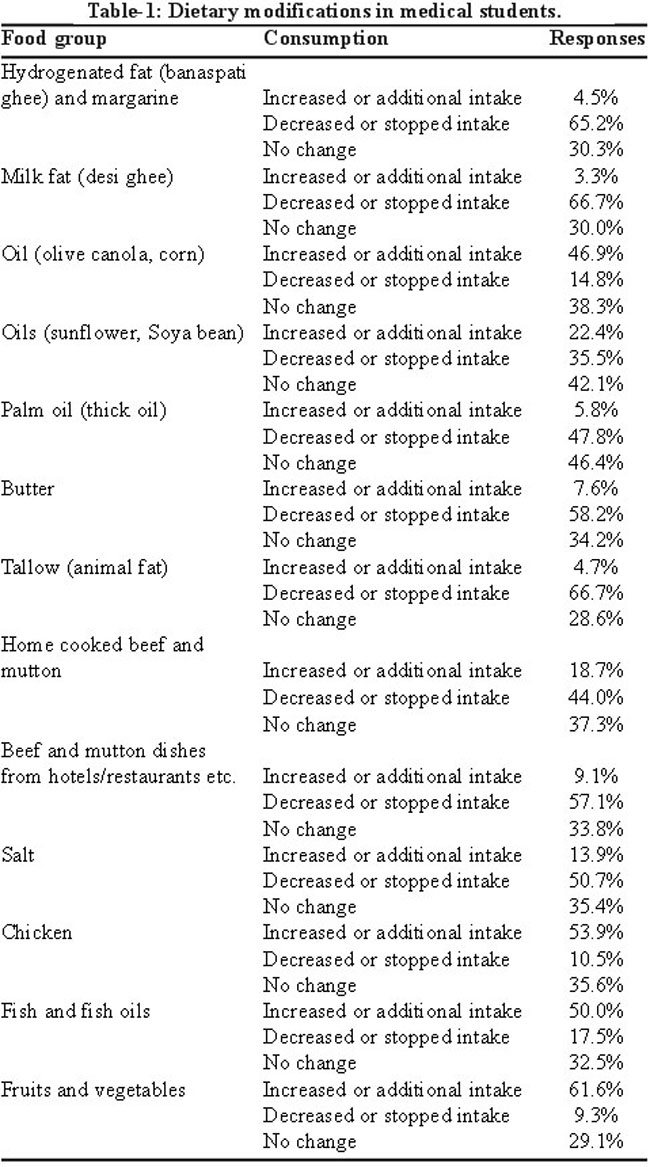 Physical activity level was assessed through the standardized WHO Global Physical Activity Questionnaire version 2. This questionnaire has been developed by WHO for physical activity surveillance in countries. It collects information on physical activity participation in three settings (or domains) as well as sedentary behaviour and intensity of physical activity is expressed according to Metabolic Equivalents (METs).8
Intensities of physical activities are commonly expressed in terms of Metabolic Equivalents (METs). MET is the ratio of a person\'s working metabolic rate relative to the resting metabolic rate. The energy cost of sitting quietly has been assigned one MET, and is equivalent to a caloric consumption of 1 kcal/kg/hour. Existing guidelines recommended by WHO have been adopted for the analysis of GPAQ data. According to the guidelines: compared to sitting quietly, a person\'s caloric consumption is four times as high when being moderately active, and eight times as high when being vigorously active.8
Standardized equipment was used to measure height, weight and blood pressure. Height was measured to the nearest 0.1 cm using a stadiometer \'Microtoise\' (CMS Weighing Equipment Ltd, London). Body weight was measured to the nearest 0.5 kg using a TANITA weighing scale (model 1535; TANITA, Arlington Heights, Illinois, USA). Blood pressure was measured through auscultatory technique by trained observers using Medicare Products Inc. mercurial sphygmomanometers (Medicare Products Inc., New Delhi, India).
Smoking was described as one cigarette per day. For the assessment of weight status BMI was used. Since the study population comprised of Pakistani students BMI ranges specific for South Asian population were used.9 Statistical Package for the Social Sciences (SPSS) version 16.0 was used for data entry and statistical analysis.

Cigarette smoking which is a major risk factor for cardiovascular diseases was prevalent in 9.4% of students. Out of these 33% were regular smokers while 66% reported that they smoked occasionally. Apart from these 21.3% students frequently used to remain in the company of smokers. Alcohol consumption was very low being reported by only 1.8% students.
Physical activity level was calculated using standardized analysis techniques as per WHO recommendations using Metabolic Equivalent (MET) to express physical activity levels. It was found that 29.5% students were highly active, 32.7% were moderately active while 37.9% had low physical activity level. According to Metabolic Equivalent (MET) the median physical activity of students was 1920 MET-minutes per week.
Analysis of the respondents answers revealed that 115 (87.1%) students had changed their diet on account of the beneficial or harmful effect of different food substances in development of cardiovascular disease. The students who reported that they had reduced or completely stopped consumption of some food product due to its role in developing CVD were 52 (39.4%) and 31 (23.5%) students reported that they had increased or started additional intake of a food product due to its beneficial role in preventing CVD.
Food groups in which major dietary changes were seen included hydrogenated fat (banaspati ghee), milk fat (desi ghee), tallow (animal fat), and fruits and vegetables. Reduction or complete stoppage of consumption in hydrogenated fat (banaspati ghee) and margarine, milk fat (desi ghee), and tallow (animal fat) was seen in 65.25%, 66.7% and 66.7% students respectively. Increase in or additional consumption of fruits and vegetables was reported by 61.6% students. Table-1 shows the dietary modifications adopted by the students.
Overall 26 (20.2%) students thought they were overweight but 23 (17.4%) were actually found to be overweight according to their BMI.
According to the responses 88 (71%) students were able to calculate their own BMI. A small quiz was given to test the knowledge of students regarding interpretation of BMI. Majority of the students (56.1%) were able to correctly answer at least 5 out of the 6 questions given. Majority of the students knew the correct range for normal BMI (68.2%), underweight (78%), overweight (64.4%), obese (62.9%), and morbidly obese (70.5%).
According to answers received 75.2% said low-molecular unsaturated fats have antiatherogenic activity, 93.7% said salt results in high blood pressure, 86% said high-density lipoprotein (HDL) plasma levels protect against atherosclerosis, and 52% claimed that vitamin C decreases risk of hypertension.

Majority of medical students had normal BMI, high prevalence of cardiovascular risk factors like family history and elevated blood pressure. They had substantial knowledge regarding risk factors and measures required to reduce them but little effort is made by them to modify their lifestyle as evident from lack of implementation of healthy diet modification and low physical activity level.