Objective: To evaluate the efficacy and effectiveness of rubber band ligation on 3rd degree haemorrhoids.
Methods: Study was done at Surgical Unit, Civil Hospital Karachi, during a period of 19 months from December 2006 to July 2008. Out of 344 patients 80 patients were included in the study with 3rd degree internal haemorrhoids and were treated with Rubber band ligation (RBL). Outcome data was recorded for success of treatment.
Result: Among 80 patients, 77 (96.25%) were symptom free. After completion of treatment, 1 (16.66%) out of 5 patients had the complaint of pain, 2 (2.85%) out of 70 had complaints of constipation. Before start of treatment 5 (6.25%) patients complained of bleeding per rectum and 73 (91.25%) complained of manually reducible/prolapsed haemorrhoids. Both complaints were cured 100% after treatment.
Conclusion: RBL is an efficient, cost-effective and simple out patient procedure for symptomatic third degree haemorrhoids with minimum complications. RBL is a reliable, safe procedure requiring no hospitalization and no use of any anaesthetic drugs (JPMA 60:952; 2010).

Nowadays, rubber band ligation (RBL) is the most widely used procedure and it offers the possibility to resolve haemorrhoids disease without the need for hospitalization or anaesthesia and with a lower incidence of complications when compared to conventional studies.1 Not more than two haemorrhoids should be banded at each session and three weeks at least should elapse between each treatment.2 To avoid pain one of the major complications of banding, bands should be applied at least 1.5cm above the dilatation.3 Haemorrhoids are the clinical manifestation of the downward disruption of the normal, functional structures known as the anal cushions.4 The symptoms of bleeding from their exposed upper mucosal part, protrusion and sometimes pain, reflect this fact.5 Rubber bands are placed above the base of haemorrhoids i.e. above the insensate dentate line; the procedure should be painless. The strangulated haemorrhoid becomes necrotic and sloughs of resulting in fibrosis which leads to the fixation of the underlying tissue to the rectal wall.6
The aim of our study was to evaluate the efficacy and effectiveness of RBL on third degree haemorrhoids, as a number of non-operative modalities are in practice for non-prolapsing haemorrhoids.

A prospective study was designed at the Pile Clinic, Civil Hospital Karachi, Pakistan, which covers the health care of patients coming from varius areas of Sindh province. All successive patients were referred from different out patient departments of the Civil Hospital, suffering from haemorrhoidal disease between December 2006 till July 2008. For this study we included a total of eighty patients presenting with third degree internal haemorrhoids. All our patients had their medical history taken, and then went through a digital rectal examination and proctoscopy. RBL was carried out on all patients. Procedure was done with the help of an assistant, nil bowel prepation, sedation was not done and the patient was placed in the left lateral position.
Protoscope, lubricant, grasping forceps, rubber bands, loading core, Barron\'s band ligator, forceps and cotton wool for wiping and gauze for cleaning were used. Before starting the procedure consent was taken and the procedure explained to each patients. We performed one or a maximum of up-to two ligations, at a time. After the procedure the patients were asked to wait in waiting area for 10-15 minutes for any acute complaints with an advice to:
A: Avoid straining at stools for at least 24 hours.
B: Stool softeners e.g. syrup cremaffin or Syrup paraffin 2 TSF three times a day.
C: Tab. Diclofenac sodium 50mg thrice/ daily for 2-3 days then sos.
D: Isphagol husk.
E: Patients were asked to come for 3-4 follow-up visits with at least one month gap after the treatment for haemorrhoidal disease was completed.

As far as the practicality of the method is concerned, it must sound easy, safe and patient friendly. 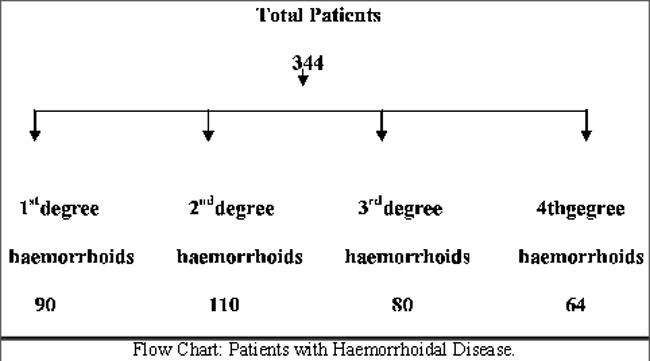 Among 60 (75%) patients with 3 internal, third degree haemorrhoids, 27(45%) were done in three sessions and 33(55%) were done in two sessions ligating two haemorrhoids in first session and one in the next session. The 15(18%) patients with 2 internal third degree haemorrhoids, were done in two sessions, ligating single haemorrhoid per session. All 5(6.25%) patients with 1 third degree haemorrhoid, were ligated in a single session.
In both sexes, the highest numbers of patients were in the age group of 31-40 years. The average age of patients were 33 years, 81.25% patients came through surgical out patient department, 18.75% were referred by other specialties.
The most common symptom found was constipation or straining during defecation in 70 (87.5%), manually reduceable prolapsing haemorrhoids in 73 (91.25%), bleeding per rectum and pruritus in 5 (6.25%).
Symptoms of prolapse or bleeding per rectum fully recovered after second and third session of RBL 100%, 2 (2.5%) didnt turn up for second follow up, 1 (1.25%) patient had complaint of pain for one month after completion of treatment and 70 patients had complaints of constipation before treatment and only 2 (2.8%) had it after the treatment, the recovery rate was 97.14% (Table-3).

RBL is quickly gaining popularity because it is safe,(no anesthesia), quick and simple way of dealing with haemorrhoid disease RBL was introduced by Blaisdell 1958.Barron popularized the procedure and later on the procedure became known by his name.7
Sheikh AR and Ahmad I8 reported good results and recommended it as a first line management and as an alternative to haemorrhoidectamy. Ahmad R9 presented that RBL is an effective form of therapy that can control pain, itching, bleeding and discharge.
Haemorrhoidal bending remains the most successful method to manage haemorrhoids in out patients clinic.10 Barron\'s banding causes fixation and fibrosis by removing excess tissues followed by healing by secondary intention.11 The only flaw of RBL is that it is not effective against the skin covered component of haemorrhoid or an associated skin tag.12
Komborozzos and associates13 described 43 (8.6%) patients presenting with pain, and in all cases pain appeared immediately or a few hours after ligation and lasted less then 2-3 days, pain occurred most frequently when the ligation was placed too low in the anal canal. In our series 7.5% (6/80) had complaints of pain before treatment and 83.33% (5/6)were relieved of their pain after RBL, only 16.66% (1/6) had pain which gradually settled in one month.
The reason behind avoiding triple band ligation is because stretching the mucosa can lead to pain and sometimes stenosis. The cause of pain in rubber banding is bending before the dentate line.14 Gupta P J15 compared rubber band with infrared therapy. He reported more pain with RBL but less chances of recurrence. Mattana and associates16 reported severe pain in 7.5% of cases.
Wehrmann T and colleagues17 reported pain in 25% of patients with RBL. Arroyo A and associates18 concluded that open haemorrhoidectomy was associated with significant pain.
Lee et al19 reported that patients with multiple haemorrhoidal banding in a single session compared with patients with single banding had greater discomfort and pain (29 vs 4.5%).
In our series a maximum of two bands were placed per session, but it was observed that the patients on whom single band was applied per session were more comfortable and pain free as compared to the group on whom two bands were applied, who had complaints of pain, straining at defecation and discomfort.
Poen at el20 have shown RBL to be as effective as haemorrhoidectomy. The study also confirms that RBL is an effective treatment for symptomatic haemorrhoids. Kumar et al21 described a cure rate up to 70%, whereas in our study cure rate was 96.25%.
All our patients were kept under observation in the waiting area for 20-30mins following which they went home. None of our patient was admitted to in-patient. This is comparabe to other international studies.11
Mehanna et al22 reported 4% of patients with RBL had a minor bleed, which required no active surgical management. In our study there was no bleeding in any of the patient of RBL which is compatible to Sheikh A R8 who reported no bleeding after RBL. Iyer V S and associates23 reported bleeding in 28% of patients. They concluded that placement of four or more bands were associated with higher complications. Their success was 70.5%. Su M Y and associates24 reported control of bleeding and prolapse in 93% and 91% of patients after RBL. In our study the control of bleeding and prolapse was 100%. O\'Regan P J25 reported excellent results with no bleeding with a disposable RBL device. This study supports our series of patients in the control of bleeding by RBL.
Fakuda A and associates26 reported excellent results in 89% of patients, good in 9% and poor in 2% of patients with RBL. Bursics A and associates27 reported that both nasal and squeeze pressure dropped after haemorrhoidectomy, whereas they remained unchanged in RBL. Vincent P and associates28 experienced excellent results with 6% complications. The most frequent complications were rectal tenesmus, dysuria and transient bleeding. Go Kalp29 and associates recommended local anaesthesia with RBL as it significantly reduces pain.

In conclusion RBL in third degree internal haemorrhoids appears to be one of the best possible options, as observed in this study. RBL is a simple, cost-effective and safe out-patient procedure which requires no hospitalization, no anaesthesia and no post operative care. Post procedure complications were none in this study. An ideal choice for pregnant females and old age patients who are not fit for general anesthesia.