Objectives: To evaluate the effect of domestic boiling practice on the contents of water soluble vitamins of loose milk and quantitative comparison of these vitamins in Ultra High Temperature (UHT) treated packaged milk with that of boiled loose milk.
Methods: Loose milk samples were collected from various localities of Karachi city (Pakistan). These samples were boiled in simulated household conditions for 5, 10 and 15 minutes. Ultra High Temperature (UHT) treated packaged milk samples of various brands were obtained from the local market. The aliquots were analyzed for water-soluble vitamins using High Performance Liquid Chromatography (HPLC) technique. The mean values and standard deviations for data were computed and compared as well as level of variations were also determined.
Results: Conventional boiling caused destruction of water soluble vitamins in milk i.e. vitamin B1 content in fresh milk decreased from 0.037 mg/100g to 0.027 mg/100g after 15 min boiling, whereas vitamin B2 from 0.115 to 0.084 mg/100g, vitamin B3 0.062 to 0.044 mg/100g, vitamin B6 0.025 to 0.019 mg/100g and folic acid 3.38 to 2.40 µg/100g. This accounted for a post-boiling decrease of about 27, 27, 29, 24 and 36% in vitamins B1, B2, B3, B6 and folic acid respectively. The values for vitamins B1, B2, B3, B6 and folic acid determined in boiled milk were significantly lower than UHT treated packaged milk samples by 25.9, 75.0, 54.5, 63.16 and 38.1% respectively.
Conclusion: Conventional boiling caused drastic reduction in vitamin levels of loose milk samples. In comparison to this, UHT milk retained high levels of water soluble B-vitamins. Thus it could be envisaged that UHT treated milk provides better water soluble vitamins\' nourishment than conventionally boiled milk (JPMA 60:909; 2010).

Milk has been referred as a perfect food for human beings from nutritional stand point. It provides protein, minerals and vitamins to nourish individuals of all age groups. These macro nutrients present in milk have a major impact on nutritional, technological and sensory properties of milk and dairy products.1 Normal milk composition varies for water (85.5 - 89.5%), total solids (10.5 - 14.5%), fat (2.5 - 6.0%), crude protein (2.9 - 5.0%), lactose (3.6 - 5.5%) and minerals (0.6 - 0.9%).2 In addition to these nutrients, vitamins are also an integral part of milk nutritional profile. Vitamins have very critical role in human vitality and body functioning e.g. vitamin B1 (thiamin) converts macronutrients into energy form and maintains heart functioning, B2 (riboflavin) helps to produce red blood cells and assists healthy body growth, B3 (niacin) controls calcium release, accesses food energy and is needed for healthy nerves and skin, B6 (pyridoxine) helps in cell renewal and B12 (cobalamin) is vital for healthy nervous system.3
However, due to the fact that vitamins are very sensitive nutrients, careless milk processing has probably a deteriorative effect on these vitamins. A significant reduction in vitamin B1 (thiamin),4 B2 (riboflavin),5 B3 (niacin), B6,6 B127 and folate8 has been reported under the influence of different milk processing treatments. Milk boiling on stove is a common processing practice around the globe to reduce the level of natural microbial pathogens found in milk. This practice has deleterious effect on the contents of B-vitamins. Whereas UHT heat treatment of milk has been considered as a safe way to process the milk, because the short duration of heat application results in improved nutritional retention and less vitamin loss. The present study was undertaken to investigate the effect of milk processing in simulated household conditions on these vitamins. The vitamin levels in UHT treated packaged milk samples was also determined and compared with boiled loose milk samples.

UHT milk samples of various brands differing in manufacturing batches were procured from local market. Whereas, loose milk samples were collected from milk men and milk shops, widely distributed in Karachi city (Pakistan). All loose milk samples were shifted to the laboratory in ice packed condition and stored at freezing point temperature till analyses was performed. Thirty samples for both UHT treated packaged and loose milk groups were included in the study.
After removal of fresh milk samples, remaining milk samples were subjected to processing in simulated household boiling conditions for 5, 10 and 15 minutes. After boiling, the milk was cooled in ice bath and homogenized. The vitamins were extracted by mixing 50 ml of homogenized milk sample with 65 ml of 0.1N HCl. The mixture was digested for 30 minutes in boiling water bath with frequent mixing. After cooling the digested mixture to room temperature, the pH was adjusted to 4.0-4.5 with 2.5M Sodium acetate buffer. After that 5 ml of 10% enzyme solution (Taka-diastase) was added and the mixture was incubated for 3 hrs at 45- 50ºC with mixing every 30 minutes. The preparations were then cooled, filtered and diluted to 100 ml with distilled water. Before injection, prepared samples were re-filtered through 0.2 micron filter.9
Stock standard solution for vitamin B1 was prepared by dissolving 43.4 mg of thiamin hydrochloride in 100 ml of deionized water. In order to prepare a stock standard solution for vitamin B2, 30.6 mg of riboflavin was dissolved in 100 ml deionized water. For vitamin B3 stock solution 53.9 mg of nicotinic acid was dissolved in 100 ml deionized water. Stock standard solution for vitamin B6 was prepared by dissolving 30.8 mg of pyridoxine hydrochloride in 100ml deionized water. For vitamin B12 stock solution 76.3 mg of cynocobalamine was dissolved in 100 ml deionized water. Stock solution for folic acid was prepared by dissolving 0.65 g in 100 ml deionized water. The working standards for each vitamin was prepared by taking 1 ml of respected stock solution into 50 ml volumetric flask and made up with deionizes water. Before injection all solutions were filtered through 0.2 micron filter.
Preparation of Buffer and Mobile Phase included 50mM phosphate buffer (pH 2.5) prepared by dissolving 7.8005 gm of sodium phosphate monobasic dihydrate (NaH2PO4.2H2O) in deionized water in a 1000 ml volumetric flask. Prior to making the volume, pH was adjusted to 2.5 by adding 0.1M HCl drop wise. Prepared buffer was subsequently filtered through 0.2 micron filter.
The mobile phase \'A\' was prepared by mixing 50mM phosphate buffer in HPLC grade (99.9%) methanol by 90:10 ratio. Mobile phase \'B\' was prepared by mixing 50mM phosphate buffer in methanol by 10:90 ratios. Before running mobile phase in HPLC both \'A\' and \'B\' were again filtered through 0.2 micron filter and sonicated for 10 min at room temperature.
The aliquots were then analyzed for vitamins using High Performance Liquid Chromatography (HPLC) (Agilent 1100) equipped with Zorbax SB-C8, 4.6 x 150 mm, 5 nm column. Column temperature was set at ambient and UV detector was adjusted at 245 nm. The flow rate was 1.2 ml/min throughout the analysis. The base line was obtained by flowing mobile phase \'A\' while during run mobile phase \'A\' and \'B\' were flowed with the gradient of 0 - 70% for mobile phase \'B\' within 18min.10
Calibration curve was obtained for each vitamin by injecting five different injection volumes of respected working standard solution. Standard curve was plotted between concentration versus peak area and treated by linear least square regression and the obtained regression equation was utilized to estimate vitamins in diverse milk samples.
Statistical analysis of data was performed using Minitab Version 15 (Minitab Inc. Quality Plaza, 1829 Pine Hall Rd. State College. PA. 16801. United States). The mean values and standard deviation for data was computed as well as level of variation was determined by employing F-test at 95% confidence level.11 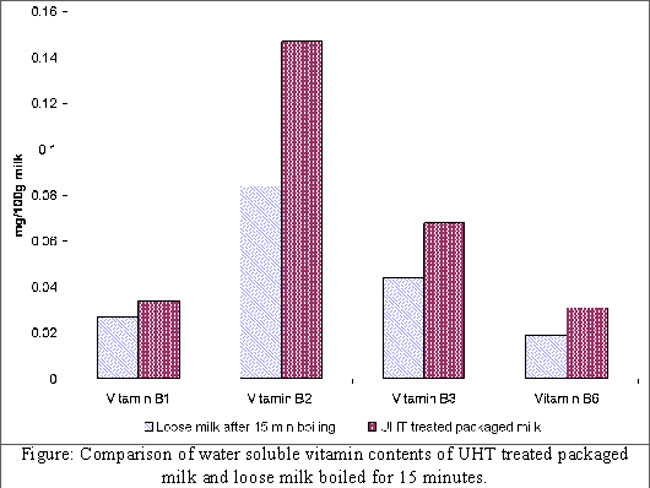 The nutrient loss is a general aftermath of various processing treatments. The widely practiced method of milk pasteurization in Pakistan is conventional boiling for certain time period over stove. Whereas, in general heating applied in industrial processing is Ultra-high-temperature (UHT) processing which generally refers to milk that has been heated to at least 130°C for not less than 1 second and then aseptically packaged. It is fundamental principle generally for food and specifically for milk that higher the temperature and shorter the processing time, the greater is the nutrient retention. During prolonged heating certain sensitive components of milk i.e. water soluble vitamins, being prone to certain processing conditions, may alter or destroy. During milk processing significant losses of vitamin B1 (thiamin) have been reported i.e. pasteurization, 9-20%; sterilization, 30-35%; spray-drying, 10%; roller drying, 15%; and condensing (canning), 40%.4 In the present study 27% reduction in vitamin B1 was noted due to conventional boiling treatment.
Milk and other dairy products are important sources of vitamin B2 (riboflavin). Cow milk, whole, pasteurized contains 0.23 mg riboflavin/100g which is mainly free riboflavin.12 It is generally stable during the heat processing and normal cooking of foods, if light is excluded.13 Milk exposed to light undergoes major loss of riboflavin due to photodegradation in the wavelength range of 400-550 nm.14 Photodegradation of riboflavin in milk proceeds by a single-phase, first order mechanism, and increases with an increase in storage temperature and light intensity.15 As much as 85% of the vitamin B2 content of milk in glass bottles may be destroyed only after 2 hours exposure to bright sunlight.5 Under the influence of light exposure and heating conditions, a significant loss (27%) was noticed in boiled milk samples. Much of the available Vitamin B3 (niacin) in the diet is in the form of nicotinamide nucleotides (NAD and NADP), while meat and milk contain free nicotinamide. Niacin was found to be reduced by 29% during the course of present investigation.
As far as vitamin B6 is concerned, milk contains relatively low concentrations of Vitamin B6. Heat-sterilization of milk and unfortified infant formula resulted in losses of 36-67% of naturally occurring vitamin B6.16 The reduction of vitamin activity during autoclaving is attributed to the loss of the predominant B6 vitamers pyridoxal (PL) and pyridoxamine (PM), which degrades to same extent as natural vitamin B6, whereas, pyridoxine (PN) vitamer is not appreciably destroys by autoclaving. Ford et al. (1969)17 reported no loss of vitamin B6 during the ultra-high temperature (UHT) processing of milk.6 However, conventional boiling for 15 minutes contributed a net loss of 24% for vitamin B6. Vitamin B12 is ubiquitous in foods of animal origin. Milk is one of the important food sources. In the heat treatment of milk appreciable high losses of vitamin B12 have been reported i.e. boiling for 2-5 min, 30%; pasteurization for 2-3 sec, 7%; sterilization in the bottle at 120°C for 13 minutes, 77%; rapid sterilization at 143°C for 3-4 sec with superheated steam, 10%; evaporation, 70-90%; and spray-drying, 20-35%.7 Microwave heating of pasteurized cow\'s milk for 6 minutes resulted in an appreciable loss (ca. 30-40%) of vitamin B12.18 The observation pattern for vitamin B12 was different in the study, as it was found absent in all loose milk samples that could be attributed to either sensitive nature of this vitamin or unsuitable detection limit of the experimental unit.
Polyglutamyl folate is an essential biochemical constituent of living cells, and most foods contribute some folate to the diet. However, animal based diets are poor sources of folate. Its loss in UHT-processed milk amounted to 12.5%;19 loss in pasteurized milk remained 10%.8 During the present study a 36% reduction in folate was observed due to conventional boiling.