Objective: To compare the results of open with laparoscopic appendectomy in terms of postoperative pain, rate of wound infection and hospital stay.
Methods: This quasi-experimental study was conducted in Deprtment of Surgery, Ziauddin University Hospital, Karachi, over a period of six months. Patients undergoing surgery for acute appendicitis were randomly assigned into one of the two groups (A or B) after obtaining written and informed consent. In Group-A patients underwent open appendectomy and in Group B laparoscopic appendectomy was performed. Post operatively pain chart and wound infection was recorded and, at the time of discharge, number of days in hospital was calculated.
Result: Sixty patients (38 male, 22 female), with clinical diagnosis of acute appendicitis based on Alvarado score of six and above, were included in the study. They were randomized into 2 groups of A and B with 30 patients in each group. Group-A comprised open appendectomy procedure and Group-B comprised laparoscopic appendectomy. Mean comparison of postoperative pain by visual analogue scale, was significantly low in Group B, compared with Group A, on day 0, 1 and 2. Number of days in Hospital was 4.1±0.8 days in Group A and 1.5±0.06 days in Group B. None of the patients in Group B, while 8 (26.67%) patients in-Group A, developed postoperative wound infection at 1 week follow up.
Conclusion: Laparoscopic appendectomy is safe and effective. Wound infection and postoperative pain is significantly lower after this mode of surgery (JPMA 60:901; 2010).

Appendectomy is one of the commonly performed procedures in General surgery. McBurney described the operative technique for right iliac fossa pain using Gridiron incision in 1894. This remained the technique for appendicectomy and did not change much until almost a century later, when in 1983, Semm described the first Laparoscopic appendectomy.1-5
Laparoscopic appendectomy for suspected appendicitis is considered safe and effective.6,7 It has gained popularity in recent years and has become one of the most widely performed procedures using the laparoscope globally.8 However, it has not become the universal gold standard for acute appendicitis as laparoscopic cholecystectomy has become for acute cholecystitis. This is, perhaps, mainly due to the emergency nature of disease often operated by junior staff in odd hours when laparoscopic equipment, trained staff and supervision may not be available in all hospitals. In the third world countries, cost of equipment is an additional factor among those mentioned above.
In our University Hospital, appendicectomy is being performed by both techniques depending on the availability of trained staff for laparoscopy and patients\' preferences.
We conducted this prospective study to compare the results of open appendectomy with laparoscopic appendectomy in terms of postoperative pain, rate of wound infection and hospital stay, reflecting on early return to work, to justify the increase in apparent cost of procedure.

Between October 2006 and April 2007 (six months) all patients admitted in the surgical unit with right lower quadrant pain were evaluated with the Alvarado score for appendicitis. Those who scored six or above were diagnosed as acute appendicitis, consented for enrollment in the study and were alternatively assigned to group A or B. Group A comprised of patients that underwent open appendectomy while Group B included laparoscopic appendectomy. All patients were informed about the nature of the study and the possibility of conversion to open in case of laparoscopic group. Patients who did not want to undergo the procedure assigned to them were excluded from the enrolment process. Also, the patients whose diagnosis was unclear, had a palpable lump in abdomen and /or Alvarado score at admission was less than 6 were not included.
Same surgical team performed the procedures and maximum precaution was taken to use similar techniques in all patients within each group. Use of analgesia, general and local anaesthetic agents was also kept similar for all patients.
Antibiotics were given according to the department protocol (Cefotaxime sodium 1gm and Metronidazole 500mg intravenous in single preoperative and two postoperative doses). Patients found to have gangrenous or perforated appendicitis during surgery were treated with continuation of antibiotics for 5days.
Postoperative pain control for both groups was achieved by, NSAIDS (Diclofenac sodium suppository 50mg ) at the end of procedure followed by oral analgesic (Mefinemic acid). Intravenous or intramuscular analgesics were used if needed. Hours before oral intake of liquids and solids were initiated were also noted.
Total number of days in Hospital was calculated and patients received verbal instructions to return to normal activity after discharge. First follow-up was done on seventh postoperative day for suture removal and wound assessment.
Statistical Analysis
A statistical package for social sciences (SPSS-10) was used to analyze data. Frequency and percentage were computed for categorical variables like sex, operative finding of appendix, postoperative pain and wound infection for Group A and B.
Mean and standard deviation were estimated for quantitative variables like age, duration of surgery, postoperative oral intake of liquid and solid diet, pain score on visual analogue scale (VAS) and number of days in Hospital.
Independent sample t-test was applied to compare mean difference between group A and B for age, time of surgery, postoperative intake, pain score (VAS) and hospital stay.
Chi square test was used to compare proportion difference between group A and for wound infection. P-value of less than 0.05 was considered significant for the difference.
Ethical consideration: Ethics Review Committee at Ziauddin Medical University approved the study prior to commencing data collection. Informed and written consent was taken from each patient before to randomly assigning them to treatment groups. 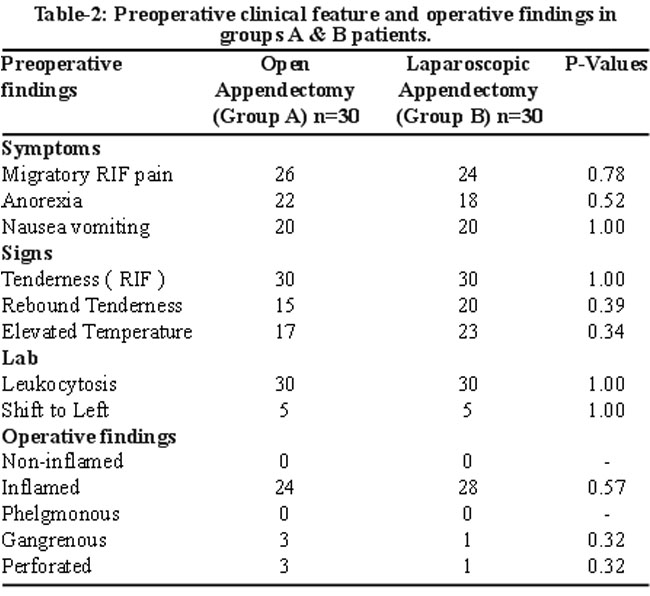 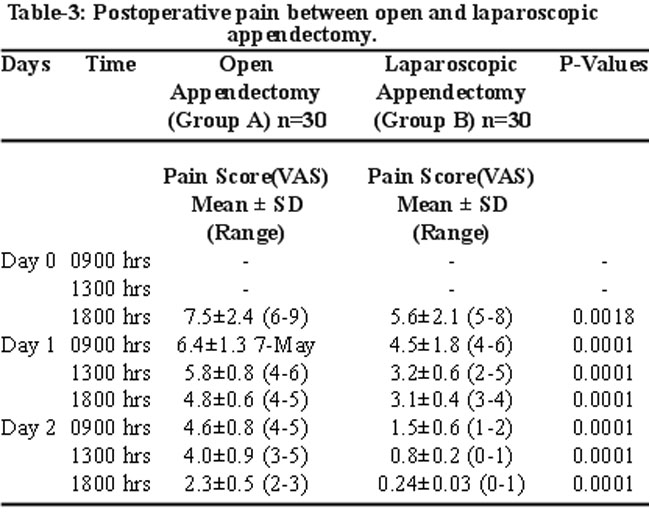 Appendectomy is the treatment of choice for acute appendicitis9 and is by far the most commonly performed emergency abdominal operation.10 Although, open appendectomy is considered a safe and effective operation for acute appendicitis with low morbidity, however, variability in the inflammatory process and the location of appendix at times causes operative difficulties. It has also been associated with potential disadvantages like post operative pain, wound sepsis and complications like intestinal obstruction which may delay recovery.11 With the development of laparoscopic technique, it has emerged as a modus operandi for both diagnosis and treatment of acute appendicitis.12 Studies have shown the procedure to be effective and with improved cosmesis, reduced postoperative pain, days of hospitalization and early return to work.13-17 Laparoscopic appendectomy was first reported in 19835 and has since been considered safe with high accuracy and complication rates as low as zero to 1.4%.18,19 Besides, laparoscopy preserves the option of leaving a macroscopically normal appendix safely in place, it also allows localization of the area of inflammation, making it possible to plan an incision if converting to open appendectomy, gives a better view to examine other peritoneal and pelvic organs, minimizing the chances of negative appendicectomy and missing other pathologies.20
Laparoscopic appendectomy has shown to be both feasible and safe in randomized comparisons with open appendectomy,21 however local data on this subject is scarce. One published report from Pakistan reviewed 20 patients undergoing the procedure and compared their results with same number of patients operated with open technique. They looked in to the differences in elective cases only and showed similar results as we have in the emergency cases.22
All laparoscopic appendectomy in this study were performed by one consultant surgeon to limit technique bias. Different consultants performed the open appendectomy using Gridiron (73.3%) or Lanz (26.7 %) incision. Mean operative time was 51.8 ± 7.8 minutes (45 to 90mins) for laparoscopic appendectomy and 39.6 ± 5.6 minutes (30-45 minutes) for open appendectomy.
Analgesia requirement in the laparoscopic group was much less than in open group which is in line with studies performed in other setups. There was significantly less number of postoperative complications in the laparoscopy group in our study.18,20 Others have reported infective complications after laparoscopic appendicectomy to be around 20 % for gangrenous or perforated cases and 10% in simple acute appendicitis.6
Mean hospital stay was significantly less (1.5±0.06 days) for laparoscopic group compared to open (4.1±0.8 days) (P<0.01). The extended hospital stay in the open group may be attributed to delay in mobilization, initiation of oral diet and the psychological effect of having an incision. Other workers have not shown this difference.22,23 The significant difference in our study can be an unintentional bias in favour of laparoscopic group, however, prolonged hospital stay after surgery is usual in our not for profit (free of cost) hospital for patients coming from low socioeconomic strata.
A difference in the proportion of patients with perforated and gangrenous appendix in open group (3 of each in open while one of each in laparoscopic group) and a higher rate of postoperative complications, like wound infection that could be attributed to the bad condition of appendix to start with, in this group was noted. There is a possibility that since patients with longer history and severe symptoms were not included in the study due to the exclusion criteria of Alvarado scoring, our sample has relatively less number of gangrenous and perforated cases compared to simple acute ones. This can be considered as a weakness of this study.

The data from our study shows that laparoscopic appendectomy is as safe and effective as open appendectomy with lesser postoperative analgesia requirement and wound infections.