Objective: To compare the results of Dot Enzyme Immunoassay (EIA) and concomitantly performed blood culture for the diagnosis of typhoid fever.
Methods: The results of Dot Enzyme Immunoassay (EIA) of patients who also had blood cultures/bone marrow culture performed at the same time were analyzed. The period of study spans between April 1997 - September 1997.
Results: A total of 1760 Dot Enzyme Immunoassays were performed from April 1997 to September 1997. Of these, only 128 (7.2%) cases had concomitantly performed blood/bone marrow cultures. Therefore, the study was narrowed down to these 128 cases. Sixty-nine cases were culture positive for S. typhi. Of these culture proven cases, 1gM antibodies by Dot EIA were positive only in 49 (71%) cases while 20 (28.9%) of culture proven cases remained negative for 1gM antibodies.
Conclusion: Taking blood/bone marrow culture as gold standard, the sensitivity of Dot EIA was found to be 71% while specificity was found to be 43%. The predictive value of the positive test was found to be 59.7% and that of a negative test was found to be 56.5% (JPMA 52:415; 2002).

Typhoid fever is one. of the major health problems in Pakistan as it is in many developing countries with an estimated incidence rate of 540/100,000 population I. Isolation of Salmonella typhi (S. typhi) from venous blood using culture technique remains gold standard of diagnosis. However, culture negative typhoid fever is also commonly encountered especially in areas like Pakistan, where over-the-counter drug availability increases the proportion of under treated patients. This significantly reduces the blood culture hield. Clinically such patients present atypically and hence are difficult to diagnose.
Diagnosis in such cases mainly relies upon serological techniques. Widal is one such test commonly used. Although a simple and rapid test, it has many limitations in terms of sensitivity and specificity that leads to difficulties in the interpretations of its results especially in the endemic regions. In view of these problems many laboratories are now assessing various other techniques for the rapid diagnosis of typhoid fever.
Techniques like co-agglutination1,2, heam­agglutination3,4, enzyme immunoassay and polymerase chain reaction5,6 have been studied. The major limiting factor in routine use of these tests in busy clinical laboratories are time consuming methodologies and requirement for expensive equipment such as ELISA readers and PCR machines.
Recently, rapid tests have been developed to detect antibodies to outer membrane proteins(OMP’s) of the S. typhi7,8. In particular a dot EIA that detects both IgM and IgG antibodies to a specific 50kDa outer membrane protein
on S. typhi is increasingly being used8. Few studies have been conducted in which the efficiency of this test has been compared with other serological test9 and clinical features8,10. Our study is a retrospective review in which we compared the results of the Dot EIA with blood/bone marrow cultures, performed concomitantly.

The EIA based assays were performed using Typhi dot (Malaysian Biodiagnostic). The assays were performed strictly, in accordance with the manufacturer’s protocol. Briefly, the antigen (50kD OMP) dotted nitrocellulose membrane was incubated with the patient’s sera and immune complexes detected using antihuman IgM and IgG conjugates. The positive and negative results were matched with the controls and reported accordingly. Any ambiguity in the results was confirmed by repeat testing. All EIA tests performed between the period of April 1997 to September 1997 were analyzed. Results of concomitantly performed blood culture/bone marrow culture, was used as a standard for the evaluation of EJA.
The blood/bone marrow cultures were performed using BACTEC 9240 automated fluorescent series instrument. Single sets of blood/bone marrow cultures were received. Positive vials were sub-cultured on sheep blood agar, chocolate agar and MacConkey agar. All gram-negative rods were identified biochemically using API-20E STRIPS (Analytical Profile Index.BIO-MERIEUX). Those identified as S. typhi were further confirmed serologically using anti-sera (Sanophi-Pasture).
A true positive case was defined as one that had EIA positive for 1gM and also grew S. typhi on blood culture.
False positive was defmed as a case that had EIA positive for IgM but culture yielded organism other than S. typhi.
The negative were those cases that were IgM negative on EIA and did not grow S. typhi on culture. Falso negative were defined as those cases that were culture positive for S. typhi but were negative for 1gM on EIA.
Having assigned the cases to the above diagnostic categories, we analyzed the sensitivity, specificity and positive and negative predictive value of EIA test. 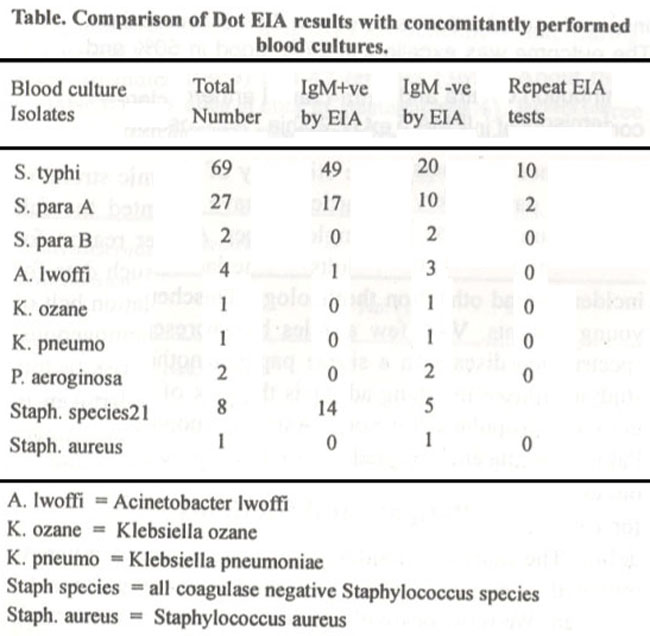 Although Dot EIA has been proposed as a diagnostic test for acute/recent typhoid fever6-10, the results of our study do not support this notion; 28.9% of the culture proven cases failed to show acute antibody response on Dot EIA test. These findings are in contrast to earlier studies published by other authors7,8,10. Using same antigen these authors have reported have reported the sensitivity and specificity of this assay to be 90%. In these studies the EIA results were correlated not only with blood culture results but also with the clinical features suggestive of typhoid fever.
Our study is different from others in two aspects. Firstly, in view of the endemic nature of the disease in our country, only EIA IgM has been used as marker of acute infection. Secondly, the EIA results have been compared with concomitantly performed blood cultures/bone marrow cultures only. In view of previous reports of antigenic cross reactivity with S. paratyphi10, it was important to differentiate patients with typhoid fever from those with paratyphoid fever so that true specificity of the assay could be ascertained. The rationale for not comparing the EIA results with the clinical features alone was due to the fact that clinically it is impossible to differentiate between typhoid and paratyphoid fever.
Significant cross reactivity with S. paratyphi is also evident from results of our study. Sera of 17 patients who had S. paratyphi in blood culture, showed 1gM reactivity.
Antigenic cross reactivity with S. para A, although helpful in ters of simultaneous diagnosis of paratyphoid fever, but statistically it reduces the specificity of this assay to 43%. The extent to which similar cross reactivity exists with other group D, non-group D Salmonella and other enterobacteriace, requires further investigation.
The gram positive organisms isolated in patients with positive IgM response mainly belong to the group which constitutes the part of normal skin flora (Table). Contamination at time of specimen collection cannot e ruled out in such cases. Thus large population based studies are required to establish the true specificity of this test.
Technically, EIA was found to be a simple test to perform, but subjectivity in the interpretation of its results was a common feature. This often-required repeat testing, which considerably increased the reporting time.
To conclude, fmdings of our study suggest that although detection of IgM by EIA test establishes diagnosis in some of the patients but diagnostic dilemma remains in those cases in which 1gM remains negative. The poor negative predictive value (56.5%) precludes its use as a diagnostic marker of acute illness.
Until large population based studies are conducted to establish the true diagnostic value of this test, blood culture remains the gold standard and clinicians should interpret EIA results cautiously.