Objective: To determine the histological grading and muscle invasion in Transitional Cell Carcinomas of the Urinary Bladder; and to evaluate whether any correlation exists between tumour grade and muscle invasion.
Method: A Retrospective study of all consecutive cases of Transitional Cell Carcinomas of the Urinary Bladder diagnosed at Aga Khan University Hospital between 1st Jan 1997 and 31st Dec 2000.
Results: This study included 495 cases of Transitional Cell Carcinoma of the Urinary Bladder. M: F ratio was 4:1. Ages of patients ranged from 30 years to 87 years. Mean age in males was 59.1 years and in females 58.8 years. Forty four percent cases were Grade II, and 29.5% Grade Ill. None of the Grade I lesions were invasive, 10% Grade II tumours, 61 .41% of Grade Ill and all Grade IV tumours were invasive.
Conclusion: There is a definite correlation between
advancing tumour grade and muscle invasion (JPMA 52:396; 2002).

Transitional cell (Urothelial) carcinoma (TCC) comprises about 90% of all primary tumours of the urinary bladder and most cases present in patients above 50 years of age1. It affects men more often than women (3 to 4:1)2. Gross or microscopic painless hematuria is the most common presentation3. Bladder cancers are more common in industrial areas and their incidence is increased with exposure to cigarette smoke and arylamines4. Some correlation has been demonstrated between smoking habits and occurrence of nuclear atypia in the transitional epithelium5. The higher incidence of TCC in males as compared to females is probably related to differences in smoking habits and occupational exposure2. TCC may be papillary or nodular (sessile) in configuration’. Papillary tumours tend to be of lower grade, of earlier stage and of less aggressive behavior than nonpapillary tumours6. Tumours with a nodular configuration are of a higher stage and behave more aggressively7. Pathologic stage is the most potent predictor of survival in TCC2.
According to the epidemiology of cancers in Karachi (1995-1999 8, bladder cancer ranks at number three behind cancers of lung and oral cavity in males, but at number thirteen in females . It ranks at number eight among males in Mumbai, India; at number four among males in Kuwait and at number four among males in USA9, at number six in a local study10.
The aim of the present study was to compare epidemiologic data of our patients (such as sex, age) with those of the West, to determine the grading of TCC, the presence or otherwise of muscle invasion, and to see its correlation with tumour.

All consecutive cases of Transitional Cell carcinoma of the bladder received in the Section of Histopathology, AKUH from Jan 1st, 1997 to Dec 3 1st, 2000 were included in the study. Cystoscopic biopsy specimens were fixed in 10% buffered Formalin. The Sections were routinely stained with Hematoxylin and Eosin. The grading of the lesions was done according to the Ash grading system9. 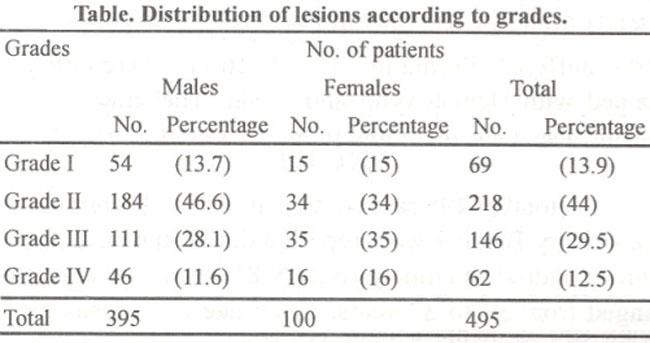 Several grading systems were proposed over the years and are primarily based on the cytologic appearance of the tumours rather than architecture or invasion although correlation exists between these parameters. The most widely used is the Ash System11. Ash classified even the better-differentiated papillary tumours as TCC Grade I because of their tendency to recur locally and the microscopic pattern did not always conform to the clinical behavior11. Mostofi et al.12 designated the better-differentiated papillary tumours as papillomas, and followed these with TCC Grades I to III. The American Bladder Tumour Registry also adopted this system. But a new WHO/ISUP Consensus Classification of Urothelial (Transitional Cell) Neoplasms of the Urinary Bladder has now emerged13. The papilloma and papillary neoplasm of low malignant potential of this classification roughly correspond to TCC Grade I of the Ash grading system. Papillary Carcinoma low grade corresponds to Ash Grade II and papillary carcinoma high grade of the consensus classification roughly corresponds to Ash Grades III and IV11.
Papillomas are benign tumours, grossly papillary, and usually pedunculated, with few layers of completely uniform transitional cells and occur mostly in younger patients. They do not recur or invade. The papillary neoplasms of low malignant potential are grossly papillary, may be pedunculated or sessile, have much thicker layers compared to papillomas and cells show cytologic atypia. Mitoses are infrequent and are usually limited to the basal layer. These lesions are clinically important because they often recur. However, they are not associated with invasion or metastases, except in rare cases. On gross examination low grade papillary carcinoma may have papillary or sessile appearance. They still have an overall orderly appearance histologically, but variation of architectural and/or cytologic features is easily recognizable, even at scanning magnification. Mitotic figures are still infrequent and usually in the lower half, but may be seen at any level. These lesions may invade the lamina propria and have a low (<5%) risk of further progression, although they frequently recur. Most high grade papillary carcinomas are grossly sessile and cauliflower-like. Microscopically, papillary areas are scanty. Cellular atypia and pleomorphism are marked and may obscure the transitional cell nature of the tumour. Mitotic figures are frequent and often atypical and are seen at all levels of the urothelium. These tumours are usually widely invasive13.
The rough correlation between the Ash system11 and ISUP consensus is also evident in our study. Ten percent of Grade II lesions in our study were invasive. As discussed above, Ash Grade II lesions correspond to Papillary Carcinoma low grade of the ISUP/WHO Consensus System and these lesions according to ISUP Consensus may invade the lamina propria and have a less than 5% risk of further progression. Similarly, Grade III and IV lesions according to Ash System11 are lumped together in ISUP consensus classification as papillary carcinoma high grade which are usually widely invasive. Our findings show that over 61% of grade III lesions are invasive and 39% noninvasive. All grade IV lesions are invasive. These findings show that there is a definite correlation between advancing tumour grade and muscle invasion.
It seems logical to classify papillomas separately (as in ISUP consensus), since they are completely benign and do not rccur or invade and to classify similar tumours which have tne ability to recur but do not invade as papillary neoplasms of low malignant potential. The grading of papillary neoplasms according to LSUP/ WHO consensus classification seems to follow a logical sequence which allows correlation of grades with muscle invasion with higher grades being more likely to invade.
In our study, M:F ratio was almost 4:1. The age and male to female ratio was similar to the studies reported to the west12. 81% patients were 50 years or older at the time of presentation. Grade III lesions were found in 35% females and 28% males and grade IV lesions in 16% females and 11.6% males. The reason for this slightly higher percentage of more aggressive grade III and IV tumors in females is not clear.
In 19% cases no muscle tissue was present to assess invasion. In this study, 37.6% cases and in a western series 20 to 25%2 showed muscularis propria invasion. The importance of including smooth muscle in the biopsy specimen cannot be overemphasized.
Hematuria was a common symptom in our series and the clinicians showed a keen awareness to the dangers of this symptom and investigated these patients further, which led to the discovery of the bladder mass.

Seroprevalence of Hepatitis B, C and HIV in Blood Donors in Northern Pakistan