Superstitions regarding Health Problems in different Ethnic Groups in Karachi

Objective: To find out the superstitions regarding health problems in different ethnic groups, their implications over the socio-economic development of that group and to what extent can those superstitions be related to their level of literacy.
Methods: The study was a questionnaire-based survey, 20 subjects from each ethnic group were selected by cluster sampling of residential areas where that particular group has its highest concentration, making a total of 100 subjects.
Results: It was found that most people (73%) do have some superstitious beliefs. Fifty percent of people believe in them as a part of culture and tradition, another 25% got them from their elders. No significant difference was found between different racial groups (p value =0.9). According to literacy rate, 73.5% of literate community and 94.1% illiterate community were found to have superstitions. The occupation of the breadwinner of family didn’t have a significant impact over the belief in superstitions (p value=0.6).
Conclusion: Majority of our population believes in superstitions, which are more common in illiterates. These superstitions not only predict health seeking behaviour of a person but also play a major role in shaping the response of a community to any health intervention program. Without the knowledge of these superstitions, effective community participation cannot be achieved (JPMA 52:383; 2002).

Superstition is defined as “ widely held but wrong idea”1. Living in the 21st century, Pakistan still survives under the thick cloud of superstitious beliefs, which have been present since Neolithic times and have undergone slight modifications. The beliefs vary from region to region and are quite distinct in different ethnic settings and are known to influence the health and disease states in a variety of ways2. Since Pakistan is an agricultural based country, most of the population resides in the villages and has no access to education3 and health facilities thus providing fertile grounds for the flourishing of superstitious beliefs. Moreover, the people are tightly locked up in religious taboos thus taking useless practices for necessary practices4. All these have created a deluge of health problems because people find satisfaction in traditional and superstitious treatment rather than contacting certified medical practitioners. It has lead to an increase in the number of sub clinical cases, resistant infections and death due to treatable diseases. In conducting this survey we aim at identifying different superstitious health seeking behaviours and comparing those behaviours after dividing the subjects in groups made according to age, gender, educational status and ethnic group.

The study was a questionnaire based cross-sectional study where 20 people from çach ethnic group (i.e. Sindhi, Punjabi, Muhajir, Balochi and Pathan) were selected via cluster sampling and systemic random sampling regardless of their socio-economic status. The city was divided into different clusters for the collection of data. These clusters were specific for that community and twenty houses from each area were selected. Gulistan-e- Johar for the Sindhi, Garden East for the Pathan, Akthar Colony for Punjabi, Lyari for the Balochi and Nazimabad for the Muhajir community. Subjects not belonging to the specific ethnic group for a specified area were excluded. All those under 18 years of age were also excluded, as were people from medical or allied professions. The Interviewers filled the questionnaires after taking informed consent. Questions relating to definition of sperstitions, definition of health, their belief in superstitions were asked. Other major themes asked in the questionnaire included treatments for diabetes mellitus, hypertension, cough and cold, chicken pox, jaundice and epilepsy before going to doctor. Statistical analysis was carried out using Microsoft Excel 97, test of significance (t-test), ANOVA and computation of descriptive statistics5.

The demographic profile of the sample population is given in Table 1. 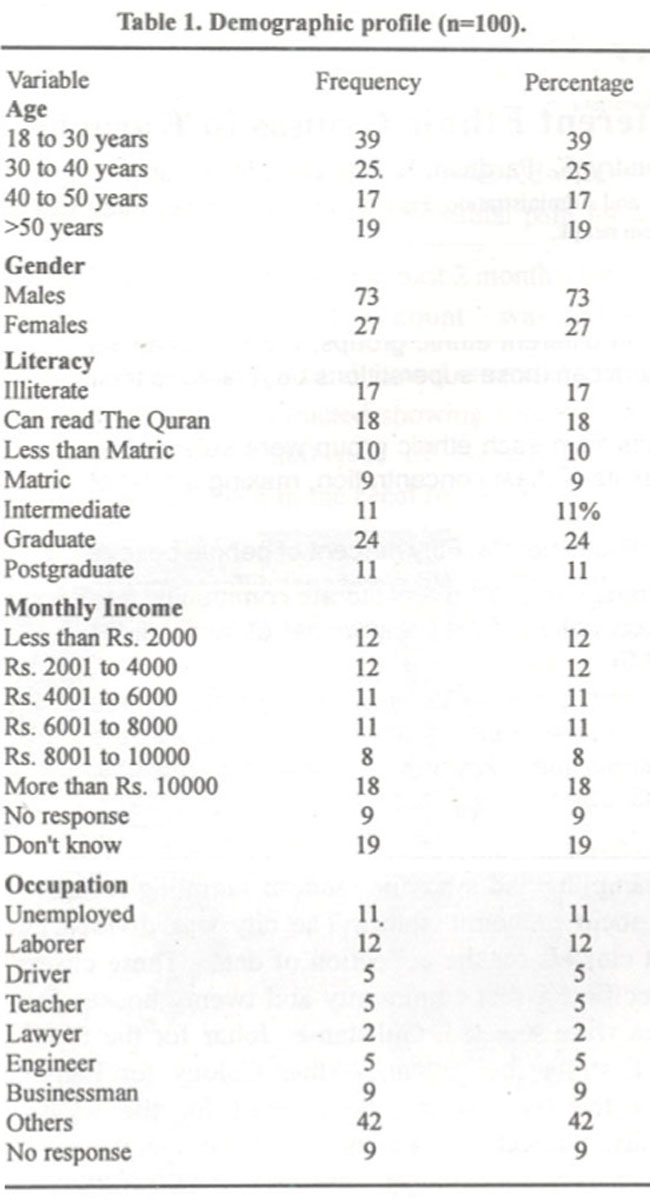 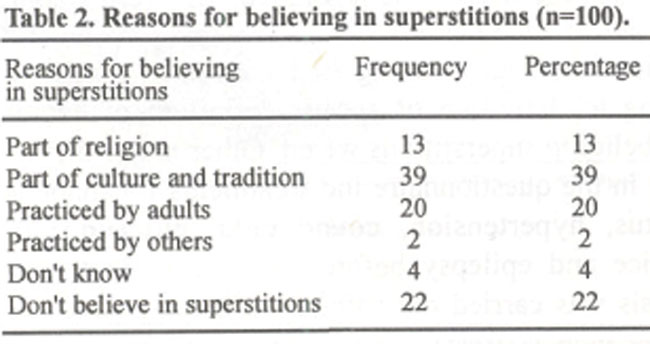 Comparing males with females, it was found that belief in superstitions does not differ between the genders (p value <0.49). Similarly the reasons for believing in superstitions were also similar in both the sexes (p value = 0.15). 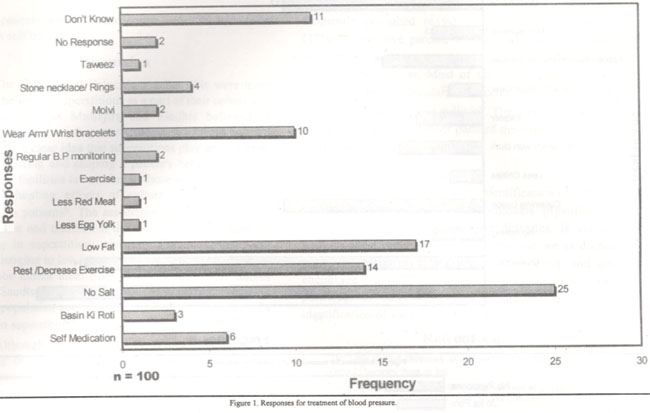 Ten percent considered “jamun” as a cure for diabetes (Figure 2), 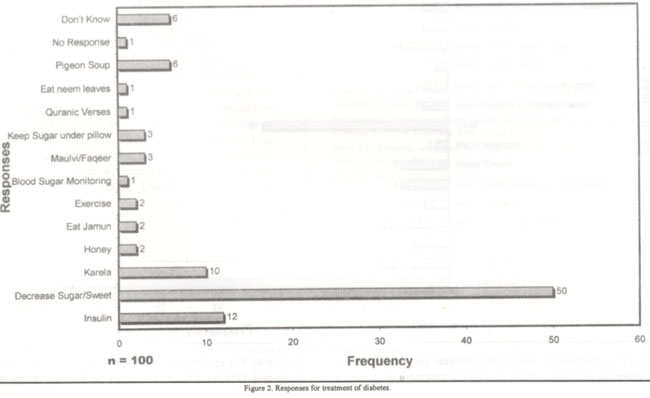 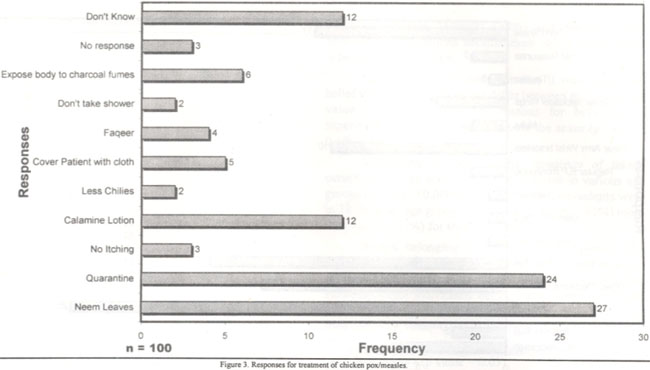 and 16% went to molvis for treatment of jaundice (Figure 4). 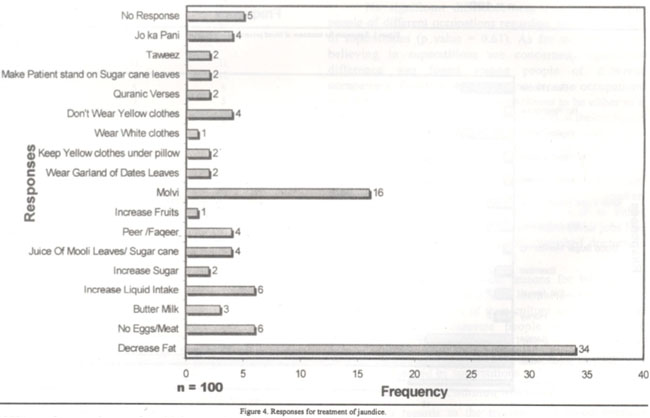 For epilepsy 20% of patients were made to smell shoes and 11% were taken to peers and faqirs. Twenty one percent patients with cold and cough and 55% with fever relied on self medication.

The finding that Baluchis and Punjabis were more likely to believe in superstitions as a part of their culture and traditions whereas Muhajirs and Sindhis believed in superstitions because they were passed on to them by their elders gives a clear idea that superstitions play an important role in directing and shaping a patient’s behavior towards health care facilities are similar to those of Bertrand in his study on healing effects of culture and traditions in Cambodian patients6. The association and firm adherence with culture and tradition is the most common reason for believing in superstitions given by illiterate people and those belonging to low income jobs while those with white-collar jobs inherit them from their elders. Similar studies done in Saudi Arabia where health centers are accessible to 93% of population confirm the influence of the elders of a family on superstitions7.
Although we did not find any difference in behaviour of males and females, an unbalanced male to female ratio in our study limits the validity of this finding. This is in contrast to the finding of Al-Krenawi who in his study on Bedouin-Arab patients found a significant difference in the superstitious behaviour of males and females regarding mental health symptoms8.
The percentage of illiterate people believing in superstitions in this study is far more than the percentage of literate people. This fact, coupled with the literacy rate of our country, gives us the overall magnitude of the problem.
There were no significant differences amongst the different age groups (p value= 0.03). The highest population of believers (33%) as well as non-believers (35%) of superstitions came from the 18-30 years age group. This could be attributed to the fact that this group was the largest of all (39%). There was a significant difference in the frequencies of measures taken. Doctors were the most frequently consulted (6 1%) and the next were molvis (17%). Thirty five percent of those who went to molvis were in 40-50 years age group. Epilepsy sufferers also consulted peer/faqeer. Most of the peer/faqeers use their reputation as manipulators of occult powers to extract money from the poor and gullible9. These practices are also said to be prevalent in other parts of the world, like certain African and American cultures10.
To conclude, the need for identification of different superstitions regarding health problems prevailing in Pakistani population, especially in illiterates, is evident. Only by identifying these superstitions can we as doctors ensure an effective doctor patient relationship and also encourage active community participation. This participation can only be achieved by a thorough identification of social, cultural and political parameters.