A 21 year old male patient presented with complaints of low-grade fever and vague abdominal pain for 6 months and intermittent diarrhoea for 1 month. There was history of loss of 4 kilogram of weight in past 2 months. On laboratory investigations the WBC count was raised with lymphocytosis. ESR was also raised. Plain abdominal X-rays were unremarkable. On small bowel enema examination, the cecum was small, contracted showing loss of distensibility involving the proximal part of ascending colon. Fine ulcerations were seen in the cecal region (Figure). 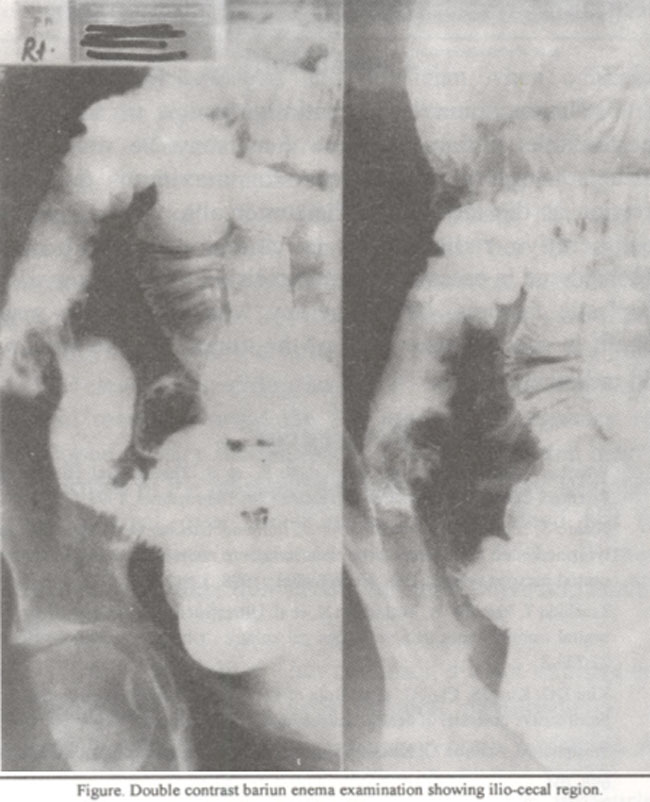 Historically, it was recognized that abdominal tuberculosis could mimic many other diseases. After a period of steady decline in the incident of tuberculosis, a resurgence of the disease has occurred since the mid 1980s1. The disease is and will remain a serious public health problem worldwide. It has been estimated that one third of the world population is infected with Mycobacterium tuberculosis2.
Abdominal tuberculosis is a common curable disease in the third world countries3. Although most cases of abdominal tuberculosis are thought to be due to a pulmonary cause, radiographs often show no evidence of lung disease. Tuberculosis involving the gastrointestinal tract has been hypothesized to occur when infected material is swallowed. The major symptoms are abdominal pain (83%), diarrhoea (67%) and weight loss (61%)4. Intestinal mucosa responds with inflammatory exudates that may progress to areas of ulceration. If the ulcer heals, it may heal with or without secondary fibrosis. The natural course of intestinal tuberculosis follows three patterns: ulcerative, hypertrophic and ulcerohypertrophic. In the ulcerative form, transverse ulcers occur perpendicular to the bowel. In the less common hypertrophic form, a mass or multiple nodules with or without caseous necrosis may mimic malignant neoplasm’s such as lymphoma or carcinoma. In the ulcerohypertrophic form, a cobblestone appearance may mimic Crohn’s disease. Typically in intestinal tuberculosis, the bowel wall is uniformly and concentrically thickened with ilio-cecal disease occurring in most cases.
Ilio-cecal involvement is seen in 80-90% of cases of abdominal tuberculosis. On barium studies, a thickened patulous ilio-cecal valve and/or wide gaping of the valve with narrowing of the terminal ileum and spasm of the distal ileum and the ascending colon with contraction of the cecum may be seen in association with a shrunken ascending colon. The cecum appears amputated and conical and may be pulled out of the iliac fossa because of mesenteric retraction. Fistulas and sinus tracts are rare. Other bowel findings include symmetric annular napkin-ring stenoses, shortening, retraction and pouch formation.
On C.T. scans, half the cases show circumferential thickening of the bowel, enlargement of the ilio-cecal valve and mesenteric lymphadenopathy. Findings in the other half of the cases, such as asymmetry of the ilio-cecal valve, thickening of the medial cecal wall, exophytic extension and engulfment of the terminal ileum and massive lymphadenopathy are most suggestive of tuberculosis. Once a diagnosis of tuberculosis has been suggested on imaging, a definitive diagnosis must be made from a biopsy or surgical specimen because treatment with steroid would lead to catastrophic results.