Central neurocytoma was first recognized as a distinct entity in 1982. It was described as a low grade interventricular neoplasm, composed of uniform cells showing neuronal differentiation. It had a favorable prognosis after surgery, with rare cases showing malignant characteristics such as repeated recurrence, increasing in nuclear pleomorphism, mitotic activity and glial differentiation1.

We report a case of a 27 years old female who presented with signs and symptoms of raised intracranial pressure when when she was three months pregnant, The episodes of headache associated with vomiting were ignored and attributed to pregnancy. With the passage of time the intensity of headaches and vomiting increased. A month later, she developed numbness of the right limb.
The gynecologist and physician when consulted reassured the patient and correlated the symptoms with the pregnancy. The patient gradually developed diffculty in walking due to numbness of the right leg along with weakness of right upper limb. At this stage she was 28 weeks pregnant and it was noted that her her mental function started to deteriorate. Concentration, memory and speech were affected. For these symptoms she consulted a neurophysician who performed the routine tests including EEG (electro-encephiogram) All these tests revealed normal results. During the 8th month of pregnancy she developed urinary incontinence. Doctors attributed this to the position of the fetus and advised symptomatic treatment. Some control over incontinence was obtained but the overall condition remained the same. With all these problems she safely delivered a full term alive and healthy baby.
After the delivery her condition did not improve and a fundoscopy showed gross bilateral papilloedema. A diagnosis of space occupying lesion in brain was made. An MRI (magnetic resonance imaging) brain was done which revealed an invasive intraventricular tumor measuring 7x5cms in size. Immediate surgery was advised (Figure 1). 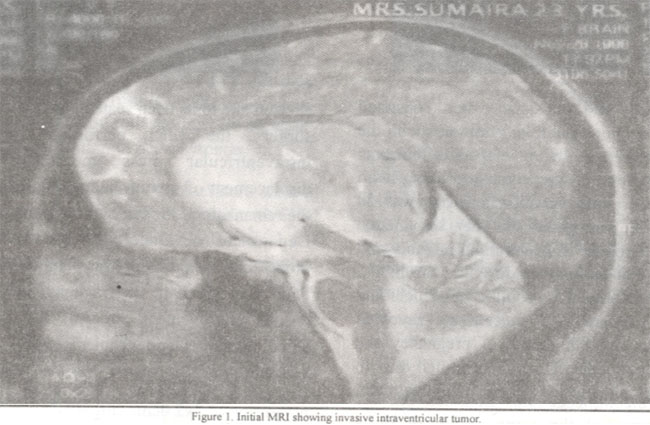 In December 1998 the first surgery was performed. A V.P (ventriculo-peritoneal) shunt was passed and two biopsies taken and sent for histopathology and immunohisto-chemistry. The patient’s condition immediately improved. Biopsy showed a very rare type of benign tumor called a neurocytoma which is benign in nature. In Febuary 1999 the second surgery was performed but unfortunately only minimal portion of the tumor was excised due to its deep seated position. After two months of surgery the MRI performed which showed an intraventricular mass measuring 5x2.5cms with displacement of septum pellucidum (Figures 2 and 3). 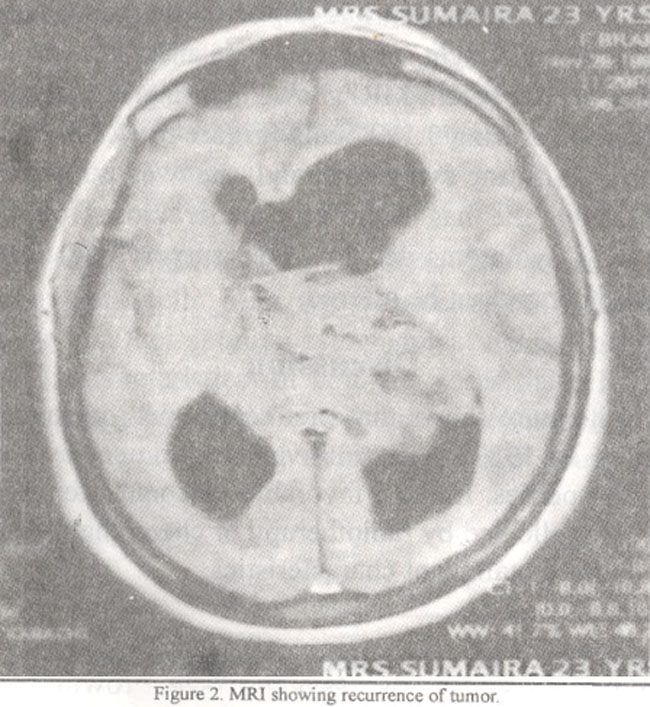 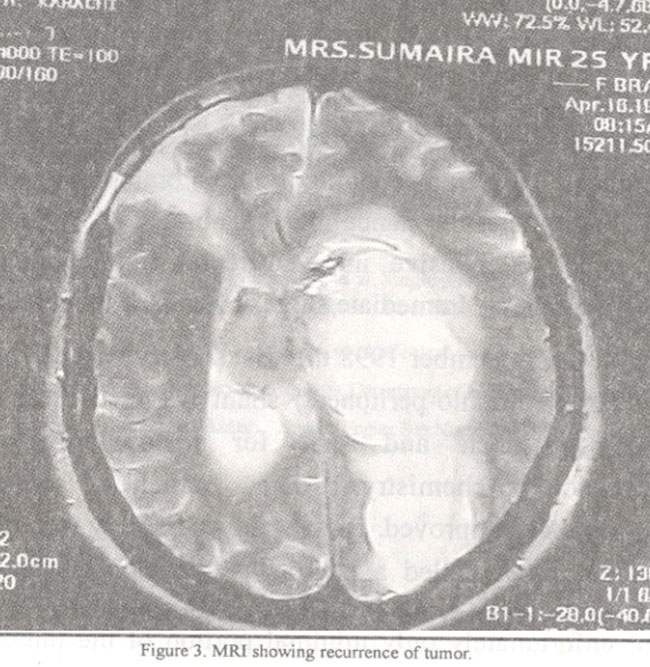 For the remanants of the tumour, the patient was referred to the Department of Oncology, due to the tumour being inoperable, radiotherapy was planned with an initial dose of 5500 cGy given in 25 ‘fractions. After the radiotherapy, despite improvement, she was still suffering from right sided weakness and problems with recent memory and concentration. In August 1999 an MRI performed again revealed a marked reduction in the size of the tumour measuring 2.3x2.Ocms (Figure 4). 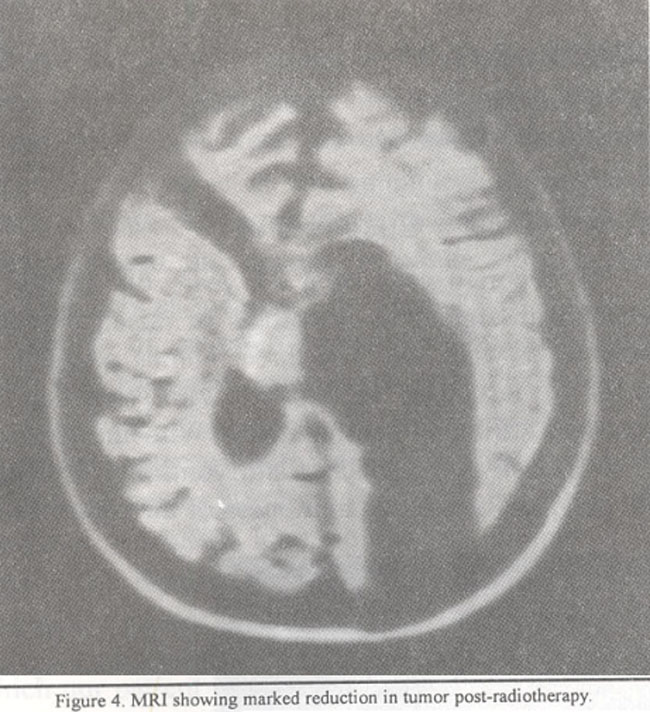 To date the patient has improved markedly but still suffers from mild right sided weakness and recent memory impairment. Her recent MRI shows light increase in size of the tumor measuring 3.5x2.5cms (Figure 5). 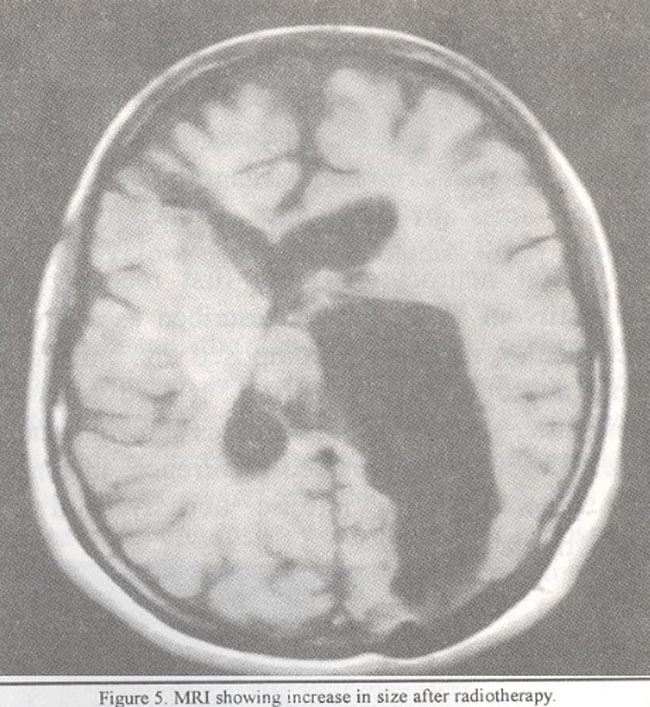 As the patient had no significant symptoms and she was subjected to radiotherapy, she has been kept under close follow-up. However if symptoms develop, then surgery, radiotherapy or chemotherapy can be offered.

Literature shows that first central neurocytoma was presented in 1982 as an intraventricular neoplasm with benign properties. It had a favorable outcome after surgery or surgery followed by radiotherapy or chemotherapy. Rare cases showed malignant characteristics.
Histogenesis: The interaction of neurotrophins with Trk family of tyrosinekinase receptors result in growth and maturational changes in neuronal cells. Although the histogenesis of brain tumors composed of mature neuronal cells is still not completely understood. Immunohistochemistry was used to evaluate the expression of neurotrophin receptors (TrKA, TrKB) and neuronal differentiation markers such as neurospecific enolase, neurofilaments, synaptophysin and chromogranin A. Neurocytoma cells are poorly described because of the tumor’s scarcity. Neurocytomas were cultured using monolayer culture for first few passages and then a portion of each specimen was cultured in collage gel (1) Immunostaining for synaptopysin or glial fibrillary acidic protein performed on a primary culture revealed the presence of cell expressing glial fibrillary acidic protein. Cells expressing synaptophysin tended to disappear in passage two, where as the cells expressing glial fibrillary acidic protein remained. These results suggest that spatial cell growth and the presence of collagen may be necessary to retain neuronal differentiation in neurocytomas2.
Proliferative Potential: Review of the literature showed the analysis of 13 neurocytomto clarify the proliferative and biological behavior. In all the cases typical clinical and radiological findings were observed and histological diagnosis was performed via craniotomy3. To predict the proliferative nature, immunoreactivity to proliferating cell nuclear antigen (PCNA), silver colloid staining for nuclear organizing region (AgNORs) and DNA flow cytometery was performed in 10 of 13 cases. The proportion of PCNA positive cells was less than 1% in all cases and AgNOs score ranged from 1.11 to 2.0% (mean 1.67).
It is suggested that most central neurocytomas follow a benign clinical course with low proliferative potential assessed by PCNA, AgNORs and DNA flow cytometry; however recurrence is possible in a relatively short period of time4.
Pluripotent Nature: Data suggests that cultured human neurocytoma cells from two neurosurgical patients were analyzed for their immunocytochemical staining pattern and growth characteristics. In both the cases the cells stained positive for glial acidic fibrillary protein (GFAP) within one day of tissue culture and without fetal calf serum whereas the histological tumor specimens were negative. Both cases contained cells concomitantly expressing GFAP and synaptophysin (SNP) in primary culture; revealed diploidy epidernrnl growth factors cultured cell but not platelet derived growth factor alpha, DGF, AA or nerve growth factor. Neurocytoma may represent a neoplasm •of pluripotent neuroglial cells which provide an interesting model of study for the determinants of human glial neuronal differentiation in vitro5.
Radiological Aspects: Intraventricular neurocytoma demonstrated significant uptake of TC - 99m, HMPAO and Ti - 201 Cl before brain biopsy. Residual tumor after biopsy showed significant uptake of I - 1231MP on early SPECT images, but this uptake was decreased on delayed images. The three radionucleotides had different uptake mechanism6.

Neurocytoma being entirely benign in nature is questionable. It appears that there may be malignant variants. Surgery should aim for maximum possible excision as the location of the tumor allows. The role of postoperative radiotherapy is controversial and may beconsidered in cases of subtotal excision of the tumor with anaplastic features. Chemotherapy with carboplatin may benefit in case of recurrence of the tumor, despite surgery and radiotherapy7.