Infection with histoplasma capsulatum is endemic in many parts of the world1. This organism is of generally low human virulence but can act as an opportunistic agent when host immune responses allow persistent parasitization of macrophages (acute pulmonary and disseminated histoplasmosis) or when abnormal pulmonary spaces due to emphysema allow colonization of these spaces and its consequences1,2. Contrarily,, it has even been known to affect immunocompetent individuals1-3. The disease may present as a transient self- limiting flu-like illness with pulmonary symptoms or as a chronic multiorgan disease, which can be mistaken for tuberculosis or a malignancy1,2,4. Histoplasma capsulatum is a dimorphic fungus which is the commonest and the most extensively studied fungal infection in the U.S 1. Its prevalence rate in Pakistan has not been documented to date. We report an indigenous case of disseminated histoplasmosis in an immunocompetent patient.

Our patient, a 45 year old male, hair dresser by profession, who had never traveled outside Pakistan, presented with a history of weight loss, cough, intermittent low grade fever and jaundice of 1 years duration. There was no history of any direct exposure to birds. He had been administered empirical anti-tuberculous therapy some months ago with no alleviation of symptoms. On examination, he was found to be asthenic, normotensive, anaemic and jaundiced with hepatosplenomegaly. On investigation, his haemoglobin was found to be 9.5 gm/dl, ESR: 47 mm/h, total bilirubin: 2mg/di. ALT: 76 U/I, alkaline phosphatase: 544 U/l and gamma GT: 346 U/I with normal serum electrolytes. He was non-diabetic, HIV­negative, non-reactive for HBsAg and anti-HCV and had normal renal function. Sputum for acid-fast bacilli was negative. Blood cultures including those for fungus were negative. Serum cortisol level at 8 AM was 12.9 ugm/dl (normal range: 6-25 ugm/dl). CT scan of chest and abdomen showed bilateral basal infiltrates in the lungs as well as paratracheal, carinal, anterior aortic and hilar lymphadenopathy as well as hepatosplenomegaly along with well circumscribed, hypodense bilateral adrenal gland enlargement (7.2x3cms on the right side and 7.2x4cms on the left). CT-guided fine needle aspiration of the right adrenal gland showed granulomatous inflammation with extensive necrosis and macrophages loaded with intracellular yeasts histologically compatible with histoplasma capsulatum. 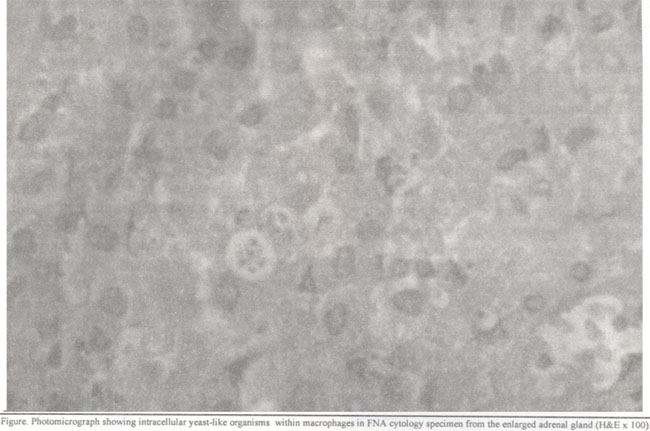 The patient was started on appropriate anti-fungal therapy (amphotericin-B, 0.6mg/kg/day) and supportive chemotherapy after hospitalization. He showed good response to treatment and became afebrile. However, owing to poor tolerance he had to be taken off amphotericin-B and put on oral itraconazole (20 mg, twice daily). After two weeks of hospital stay he was discharged on request with instructions to attend the out patients clinic. A few days later he developed abdominal distension, was taken to another hospital for treatment and died there a couple of days later.

Darling, in 1905, discovered a new organism during an autopsy and believing it to be an encapsulated plasmodium, named it histoplasma capsulatum2. During the next 40 years, other cases of what is now recognized as disseminated histoplasmosis were reported. In 1934, DeMonbreum recovered the organism from a fatal case and proved that it was a fungus and not a protozoan2. The dimorphic H. capsulatum exists in its natural habitat, the soil, in the mycelial form but converts to its pathogenic yeast phase at the body temperature (37° C) of mammals1,2. It prefers moist surfaces and particularly soil enriched by the excrement of certain birds and bats1,5,6. The fungus has been repeatedly cultured from such sites and many cases in clusters have occurred 5-18 days after the exposure of groups of people to dust, for example after raking or cleaning dirt-floored chicken coops, bull-dozing or cave exploring2,6. Skin test reactivity in many endemic areas indicates that 80% or more of residents over the age of 16 have been exposed’. These encounters are asymptomatic and of no clinical consequence in the vast majority of cases1,2. In 1945, Christie and Peterson demonstrated that histoplasmosis is a common infection that accounts for many cases of pulmonary calcification, previously thought to be due to tuberculosis2. In immunocompetent hosts, disseminated infection is believed to occur through activation of a previous infection7.
Following inhalation of the histoplasma microconidia, the organism replicates locally in the lungs followed by haematogenous dissemination. Depending upon host immunity this may either result in a usually self-limiting mild flu-like illness or progress to acute pulmonary histoplasmosis with or without its attendant complications (e.g. airway obstruction, pleural effusion, pen carditis meningoencephalitis etc)1,2.
Disseminated histoplasmosis runs a varied clinical course and its features overlap with those of other systemic illnesses including tuberculosis and malignancies4,8. It is a rare and potentially fatal development thought to be acquired due to a defect in host immunity7. These groups of susceptible hosts can be infants with immature immunity, immunosupressed individuals, or adults with no known immune defects as measured by present day methods2,3,7. Case reports of severe disseminated histoplasmosis in children with apparently normal immune function have also been published3. Interleukin-12, IFN-gamma and TNF­alpha are held responsible for mediating primary protection, while TNF-alpha has also been shown to play a vital role in maintaining secondary immunity in the absence of IFN­gamma7. The disease may present in three forms: acute (infant-type), sub-acute (intermediate-type) and chronic (adult-type) disseminated histoplasmosis2. The last group, to which our patient probably belonged, is made up almost entirely of adults. It has emerged as a difficult clinical entity to treat in individuals infected with HIV7. Constitutional symptoms are mild, chronic and often intermittent. Weight loss, intermittent fever, fatigueability and oropharyngeal ulcers are common symptoms. Mild hepatosplenomegaly, lymphadenopathy and bilateral adrenal gland enlargement are usual accompaniments of the disease1,2.
The pulmonary manifestations (bilateral apical infiltrates, hilar lymphadenopathy, calcification etc.) of the disease allow it to be readily mistaken for tuberculosis2,6, as it was in our patient. This clinical, as well as pathologic similarity between these two diseases emphasizes the need to be aware of this infection in an area non-endemic for histoplasmosis8.With the help of improved imaging techniques, bilateral adrenal gland enlargement can easily be detected. This finding in itself should suggest disseminated histoplasmosis when observed in the appropriate clinical setting2,6,9,10. A variety of other tests are available for the diagnosis of histoplasmosis (e.g.: specific immunoflourescent antibody staining, nucleic acid hybridization test, complement fixation test, immunodiffusion, urinary and serum assay for histoplasma capsulatum polysacchride antigen etc.)3. An understanding of the uses and limitations of these tests is required to permit prompt and accurate diagnosis. Unfortunately none of these tests are at present available in Pakistan. The diagnosis can also be made by the demonstration of histologically compatible intracellular organisms or a positive culture of blood or viable tissue4,9.10. Some other fungi (e.g.: cryptococcus neoformans, sporothrix schenki etc.) may mimic the intracellular forms of histoplasma capsulatum; these will therefore need to be excluded using appropriate measures4.
In Pakistan, the common practice of housing and selling live chicken and other birds in densely populated residential as well as commercial areas probably serves as a rich and ready source for the propagation of histoplasmosis. Given the lack of awareness about histoplasmosis and the prevalence of tuberculosis in our country, it is possible that many cases of histoplasmosis are being misdiagnosed as tuberculosis. An attempt should be made to create an awareness in the clinicians as well as the community about the existence of this disease. A 3% solution of formalin sprayed on histoplasma capsulatum-containing soil can be used to destroy the fungus4. The abolishment of the practice of selling and housing of live chicken in densely populated areas would also aid in the prevention of propagation of this disease.