Faecal contamination of the pleural cavity is an uncommon event. Few cases1,2 of faecal collection in pleural cavity have been described in the past. In majority of such reports anatomical explanation of faeces found in pleural cavity was evident. We report a case of faecal empyema secondary to retroperitoneal abscess which appeared to have occurred in the absence of an anatomical communication between the two cavities, The possible routes of communication between the retroperitoneum and the pleural cavities have been discussed which may explain such an occurrence.

A ten years old boy was admitted to a local hospital with mild abdominal pain and a mass in the right iliac fossa for three days. On the day of admission while playing soccer, the child gave a history of being kicked in the right flank. He was treated conservatively with a provisional diagnosis of appendicular mass. His chest and abdominal X­rays were normal. Three days later he developed
respiratory distress associated with fever and rigors. A repeat chest X­ray revealed a right sided pleural effusion. A tube thoracostomy was performed through 5th ICS and drained faecal fluid. The tube continued to drain 350-400cc of faecal fluid daily and the child became progressively septic over the next five days. At this point he was referred to the Aga Khan University Hospital (AKUH) for further management.
At the time of presentation to AKUH the patient was found to be septicaemic with a right sided chest tube draining faecal fluid which on analysis, revealed bile and undigested organic fibers. The abdomen was soft and non-tender to palpation with no signs of peritonitis. An intravenous contrast enhanced computerized tomographic scan revealed a right retroperitoneal abscess containing air.
The oral contrast appeared to be leaking from the caecum, extending upwards towards the right pleural cavity (Figure 1).

As there were no signs of peritonitis, the retroperitoneum was explored first through a flank incision to avoid peritoneal contamination. This revealed a retroperitoneal abscess with a perforation in the posterior wall of an otherwise healthy caecum. The appendix was found to be normal (Figure 2). 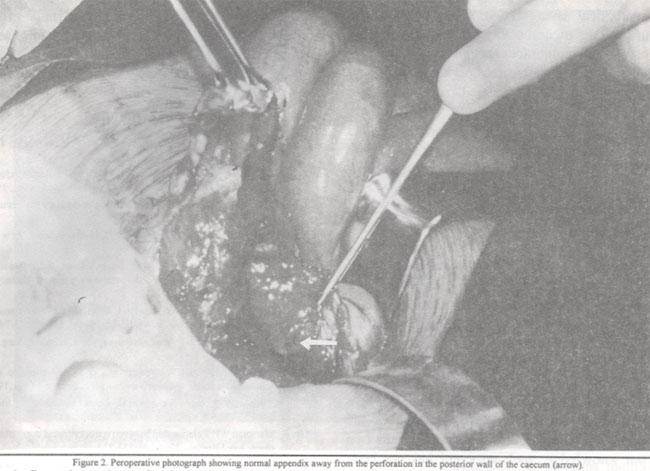 The abscess was tracking up around the right kidney. Drains were left in the this case. Furthermore, the patient described here had a normal, non-inflamed appendix.
The incision was extended anteriorly for a diverting ileostomy. The abdominal cavity was found to be clean with no contamination and the diaphragm was intact with no evidence of the chest drain penetrating to diaphragm. A divided ileostomy was performed approximately 10cms from the ileocecal junction. The right pleural cavity was explored through a minithoracotomy to break all pleural loculi and allow better drainage of the faecal empyema. His immediate postoperative period was satisfactory and the faecal discharge through the drains diminished over the next 3 to 4 days. As the child remained febrile, a repeat CT scan was performed. This revealed a residual collection in the right hemithorax which resolved after a thoracotomy and drainage. He was discharged home 10 days later on enteral feed. Four months later he was admitted for elective reversal of the stoma. He is doing well 6 months following his last procedure.