Prevalence of Diabetes, Impaired Fasting Glucose and associated Risk Factors in a rural area of Baluchistan Province according to new ADA Criteria

Objective: To assess the prevalence of Impaired Fasting Glucose (IFG) and diabetes in an adult rural population on the basis of Fasting Blood Glucose (FBG) alone using American Diabetic Association (ADA) criteria and to assess the prevalence of and association between selected risk factors such as obesity, family history of diabetes and hypertension.
Materials and Methods: Sixteen randomly selected villages from the Lasbella district of Baluchistan were ncluded in this study. One month before the survey a team visited the areas; all the households located in the selected areas were approached and the family members aged 25 or above, who were available and willing to participate in the study, were recruited. On the day of survey anthroprometric and blood pressure measurements were taken; interviews were conducted to obtain demographic information and health history and fasting blood samples were collected. The blood samples were transported to the laboratory and analysed using “GOD-PAP” Enzymatic Colorimetric test method.
Results: A total of 670 males and 1362 females were studied. Prevalence rate of diabetes using the ADA fasting criteria was 6.3% while the prevalence rate in males was 10.1% and in females was 4.3%. The prevalence rate of impaired fasting glucose was 4.2% in males and 2.3% in females. Overall prevalence of obesity between­diabetics vs non-diabetics was 22% vs 16%, for hypertension 12.9% vs 6.5% and for positive family history of diabetes 1.6% vs 0.9% was higher among diabetics as compared to non diabetics; the difference of these parameters was statistically significant only among females (P<0.01).
Conclusion: The results of this study suggest the need of continual use of OGTT for screening people at high risk of developing diabetes and perhaps also for diagnosing diabetes. (JPMA 52:357; 2002).

Pakistan, with its population of 140 million, is estimated to have about 7 million people with diabetes. Currently it is 8th in the world according to World Health Organisation (WHO) estimation of prevalence of diabetes and by the year 2025 is expected to rise to the 4th position1. In order to check the rising incidence of diabetes and assess success in these endeavors, valid information about prevalence in various sections of populations is essential2. For valid geographic and chronological comparisons uniformity of criteria is essential.
One of the most important developments in diabetes epidemiology has been the definition of a standardized criteria for the diagnosis of diabetes mellitus and impaired glucose tolerance by the U.S. NDDG3 and WHO4.
American Diabetes Association (ADA) suggested using fasting blood sugars (FBS) as a modified diagnostic criteria for epidemiological studies of diabetes prevalence and incidence. This recommendation was made to facilitate field work, particularly where OGTT may be difficult to perform and where the cost and demands on participant’s time may be excessive5.
In Pakistan, a phased nationwide prevalence study of diabetes mellitus was started’in 19946,7 which used WHO criterion for the assessment of diabetes. The ADA criterion has not yet been used for this purpose. As the ADA criterion is relatively easier and less expensive, feasibility of its use would mean ease in contInued monitoring of prevalence rates. Keeping this in mind this study was designed to estimate the prevalence of diabetes using the ADA fasting criteria in a selected area of Baluchistan, Pakistan and to assess the prevalence and association between selected risk factors associated with diabetes.

Sixteen villages from District Lasbella of Baluchistan province were selected randomly for this epidemiological study. All the villages were within a distance of 1.5 kilometers to 2.5 kilometers from Hub city.
This was a community based study in which all persons aged 25 years or more living in the selected villages were eligible for participation.
Phase I
One month before the data collection a team of health care professionals and volunteers visited all the selected areas to inform the local population about the purpose of the study. All the members of the household were provided with detailed information emphasizing the significance of the survey.
Phase II
On the specified day of the data collection, a team of doctors, lab technicians, health visitors and volunteers went to the sites selected for that day. The participants were asked to gather in the morning at a common location near their homes after an 8-14 hours overnight fast. After registration, a fasting blood sample was drawn. Through personal structured interviews, doctors collected the demographic information and health history of the participants. Height, weight and blood pressure was measured by the paramedical staff. Standing height and weight were measured with subjects in light clothing and without shoes. Height was recorded to the nearest cm and weight to the nearest 0.1 Kg. Family history of diabetes was regarded as positive if diabetes was present in a first degree relative. Every day, the non-responders for that day were contacted by the survey team in the evening and given a new appointment.
Blood Samples
Fasting blood samples were collected by lab technicians in test tubes containing sodium fluoride and immediately centrifuged. The samples were transported within an hour to the main laboratory located in Hub city. The method used was Glucose “GOD-PAP” Enzymatic Colorimetric Test8.
Classification of Diabetes and Impaired Fasting Glucose (Abnormal Glucose Tolerance)
Using the ADA criteria, diabetes was defined as Fasting Plasma Glucose >126 mg/dl. Impaired Fasting Glucose (IFG) was defined as Fasting Plasma Glucose between 110-125 mg/dl. Non-diabetics were defined as subjects with a fasting plasma glucose less than 110 mg/dI. Diabetes was considered to be present previously if diagnosed by a physician or if the patient was taking any diabetic medicines.
Statistical Analysis
Data analysis was conducted with the statistical software package ‘Statistical Package for Social Sciences (SPSS) for windows, version 10’. Body mass index was calculated using height and weight by the formula given below:
Body Mass Index (BMI) = Weight in Kg (Height in meter)2.
Obesity for males was defined as BMI greater than 27 Kg/m2. Obesity for females was defined as BMJ greater than 25 Kg/m2.
Hypertension was defined as blood pressure checked through mercury sphygmomanometer greater than 140/90 mmHg. Chi square test and ANOVA were carried out to observe the associations between selected risk factors and diabetes or IFG.

A total of 2032 subjects were examined from the sixteen villages selected for the study. Out of these 670 were males and 1362 were females. The small number of males in the survey sample was due to the majority of the men in the comrnunity working regularly in larger cities and thus being away from their homes most of the time. The most common reasons given by the non-responders for not participating in survey was that they were healthy and did not need a medical examination or that they did not want to give blood samples. Females were seen to be relatively over-represented in the younger age groups. The age distribution of the males and females is given in Table 1. 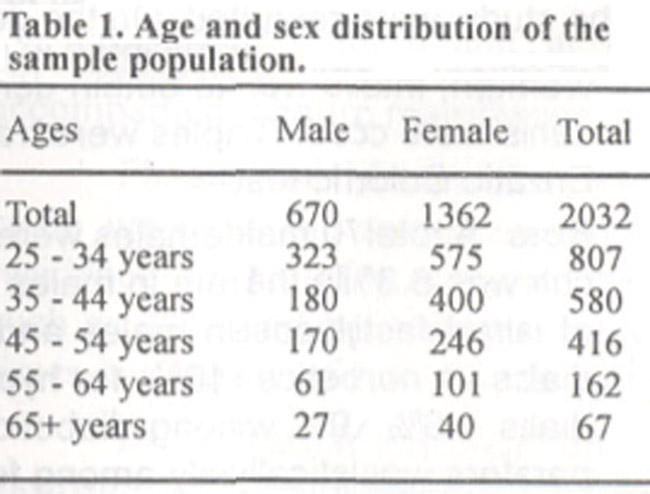 Prevalence of Factors associated with Abnormal Glucose Tolerance The mean age increased from non-diabetics to IFG and diabetics in both sexes as shown below: 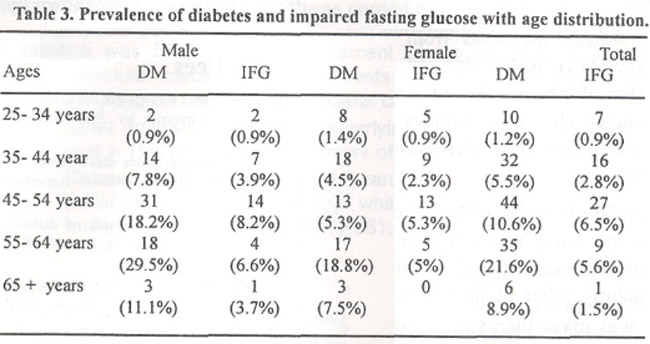 Mean BMI was higher in IFG and Diabetics as compared to non-diabetics especially in females.

We found a prevalence of Abnormal Glucose Tolerance of 10.2% among residents living in a rural area of Baluchistan which is low as compared to that reported by Pakistan National Diabetes Survey (15.9%) done in 19957.
Prevalence of diabetes (7.2%) was higher than reported previously for similar geographical area (6.5%). This could be due to the fact that ours was a semi-rural or sub-urban population sample as compared to a pure rural population which was studied by Shera7. However our overall prevalence of Impaired Fasting Glucose (IFG) using the ADA fasting criteria was low as compared to Impaired Glucose Tolerance (IGT) using the 2 hours postprandial WHO criteria as in the earlier survey7 (IFG : 3% vs IGT:
11.2%). This suggested that we might miss a large number of impaired glucose tolerance subjects by using the ADA fasting criteria.
Age was a risk factor for diabetes with the mean age increasing from non-diabetics to IFG and diabetics in both sexes. Prevalence of diabetes increased with advancing age in both sexes reaching a peak in the 55-64 years group in both males and females; this was also seen in other studies done in the sub continent9,10. The decline in rates of prevalence seen in the 65 and above age group may be due to the fact that the diabetics are not surviving over 65 years of age and dying earlier due to poor control and early complications. The peak prevalence of IFG in both sexes was seen a decade earlier than diabetics, at age of 45-54 years (Table 2).
Prevalence rates of hypertension increased from non-diabetics to IFG to diabetic group, showing an association of hypertension with diabetes. This association was stronger in females as compared to males (p value <0.001) and also seen in similar studies done in the region10.
A family history of diabetes was also recorded but many people in our study were not aware if their relatives had diabetes or were hesitant to disclose this information. Consequently, the number of people with positive family history was much lower than seen in similar studies7 and showed a positive association only in females (p value <0.007).
Obesity also seems to be a related risk factor as Mean BMI was higher in IFG and Diabetics as compared to non-diabetics. The decrease seen in diabetics as compared to IFG may be due to the fact that uncontrolled hyperglycemia causes weight loss in diabetics.
The diabetics and IFG groups included greater number of obese subjects as compared to the non diabetics, both among males and females; but the association between diabetes and obesity was statistically significant in females only (p<0.001). This trend has been noticed in other studies10.
It could be concluded that the prevalence rate of diabetes found in this study was close to that shown by using OGTT method but rate of IFG was much lower as compared to the IGT. This suggests that we would miss a large proportion of at-risk people with abnormal glucose tolerance by using ADA criteria for IFG and thus miss the opportunity to delay or prevent diabetes. Thus our study suggests the need of continual use of Oral Glucose Tolerance Test for screening people at high risk of developing diabetes as shown by other studies done in this region7 and elsewhere.