Activated charcoal (AC) has been used in the management of poisoning for more than 150 years1. The goal of using AC is to decrease systemic absorption of poisons, thereby reducing toxicity. Although AC avidly adsorbs toxic substances, this process has not been demonstrated to be irreversible2.The quicker a poison passes through the gastrointestinal tract, the less will be its desorption, provided that hyper peristalsis and increased fluid secretion do not facilitate desorption. There is an unsubstantiated claim that cathartic enhanced propulsion of charcoal-poison complex improves the antidotal efficacy of AC3-5.
Propantheline is a synthetic anticholinergic agent, which has been used for gastrointestinal disorders where its motility slowing and spasmolytic effects are considered beneficial. With an oral dose of 30mg propantheline has been shown to delay gastric emptying by 100% in all subjects6. Metoclopramide acts as a gastrointestinal prokinetic agent, speeding up gastric emptying and increasing peristalsis mainly in the small intstine7. In the clinical setting, the use and elimination of AC can be affected by agents with anticholinergic, narcotic, or sedative-hypnotic properties of the ingested substance, because they cause decreased bowel activity8.
The purpose of this study was to examine the
influence of modification of gastric emptying AC quantity and effect of saline cathartics on the gastrointestinal or oro­anal transit and residence times of AC.

Five healthy volunteers (2 women and 3 mend between the ages of 25 and 38 years (mean age 32 year) and weighing 60-85 kg (mean 78 kg) participated in the study after giving their informed consent. Subjects were non­smokers and did not take alcoholic beverages before or during the study. The Human and Toxicological Ethics Committee of our institution approved the study.
Experimental Design
The study used a simple crossover design in which subjects served as their own control. Activated charcoal (AC) (Ultra Carbon, Merk), sodium chloride (USP) magnesium sulphate (USP) and sodium sulphate (USP) were all freshly prepared with sterile injection water. Gastric emptying was experimentally modified by use of 15mg propantheline bromide and 10mg metoclopramide hydrochloride. Gastrointestinal transit and residence times were determined after administration of each of the preparations (Tables 1 and 2).
The volunteers were instructed to fast from solid foods for 12 hours before ingestion of AC saline cathartic mixtures. The volunteers continued fasting for the 2 hours post-test dosing, but were asked to record volume of water taken during this fast period. The volunteers recorded the time at which the test dose was administered and the time of first appearance of AC in faeces (transit time) and the time the last trace of charcoal was found in faeces (residence time). A one-week wash-out period separated each of the phases (Tables 1 and 2). 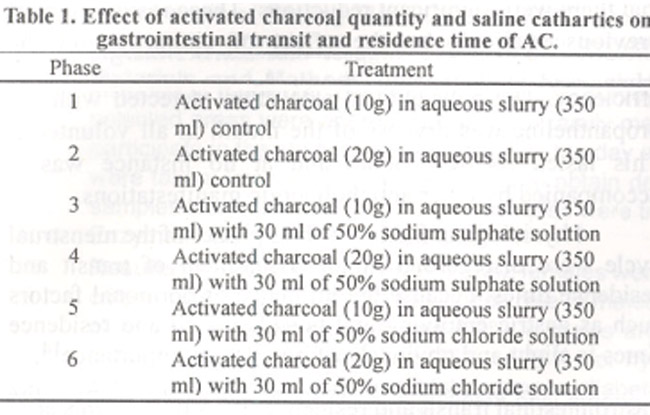 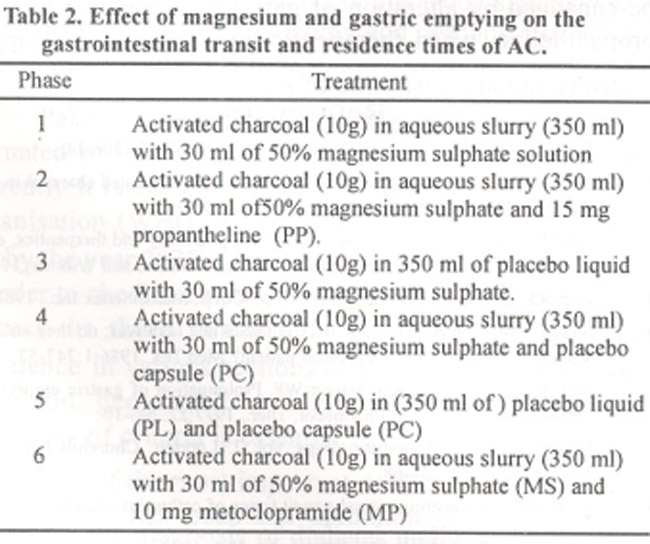 The mean gastrointestinal transit and residence times of the various treatment protocols are shown in Figure. 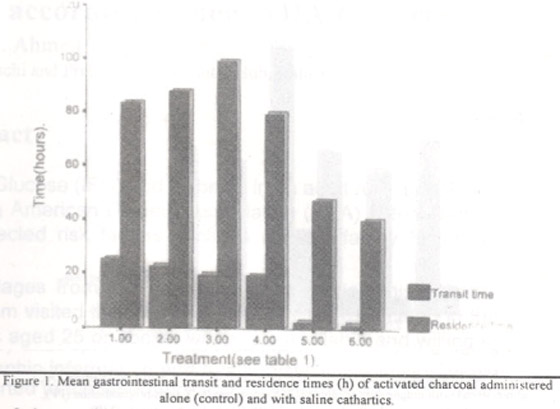 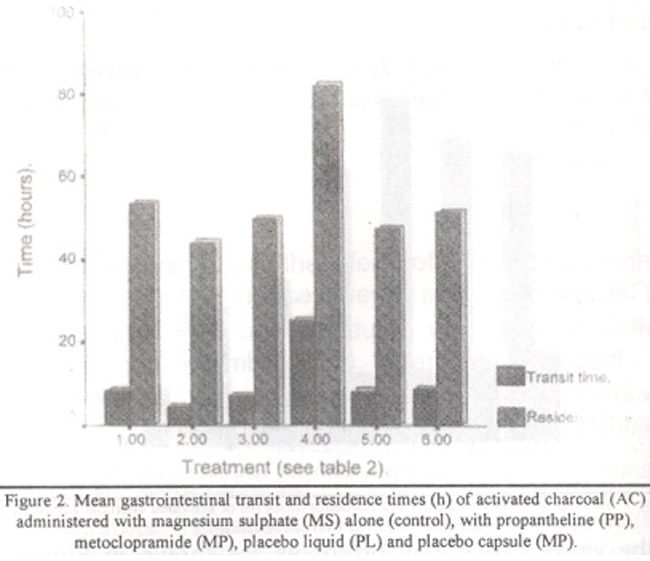