Objective: To study the significance of oligoclonal bands in neurological disorders, specifically in Multiple Sclerosis (MS).
Methods: The study was designed to assess the sensitivity and specificity of the test methodology of CSF electrophoresis by performing the retrospective analysis of CSF samples sent for oligoclonal bands (OCB). A total of 603 samples were received by the Clinical Laboratories, Department of Pathology of The Aga Khan University, during a period of 54 months (January 1993-June 1997). All of these samples were analyzed by performing CSF protein electrophoresis. One hundred thirtythree out of 603 samples showed evidence of OCB. Out of these, 24 patients were registered with Section of Neurology, Department of Medicine, The Aga Khan University Hospital. These 24 patients were finally selected for analysis. Relevant clinical details such as age, sex and clinical presentations were recorded.
Results: Fifteen (62%) out of 24 patients with positive OCB were diagnosed as cases of MS. Four (17%) patients were diagnosed to have subacute sclerosing panencephalitis (SSPE). Five (21%) patients were having other inflammatory neurological disorders.
Conclusion: The overall relative sensitivity and specificity for multiple sclerosis were found to be 100% and to the fact that OCB were positive in other neurological 62.5% respectively. Lack of specificity was attributed disorders as well (JPMA 52:351; 2002).

Multiple Sclerosis (MS) is an inflammatory disorder of the central nervous system (CNS). MS is common in Western countries especially in the northern part of Europe. However, less commonly it is also seen in Asian countries1,2. It has a prevalence rate of 30 per 100,000 in high frequency areas such as United Kingdom3. Multiple Sclerosis is an autoimmune organ specific disease of CNS characterized by inflammation and demyelination4. The typical symptoms include, visual disturbances, optic neuritis, diplopia, nystagmus, dysarthria, weakness, parasthesia, bladder abnormalities and mood alterations5. Intelligence and implicit memory appear to be relatively preserved.
Susceptibility of MS is found to be associated with HLA-DR2 Haplotype. Antibodies specific for defined HLA-DR2 peptide complex are important tools for studying antigen presentation in MS6. Primary target antigen seems to be Myelin Basic Protein (MBP) due to its prominence in CNS myelin. Immunogenic properties and encephalitogenicity for inducing experimental allergic encephalitis has been shown in an animal model of MS4,7. Antibodies to myelin components and various viruses are present in CSF from patients with MS8,9. Oligoclonal IgG bands (OCB) in CSF are characteristic of clinically defmite MS in most populations7,10,11. The presence of cerebrospinal fluid (CSF) oligoclonal bands is one of the reliable laboratory tests for the diagnosis of inflammatory disorders of the nervous system. CSF oligoclonal bands are present in 95-100% of patients with MS8,12. Isoelectric focusing (IEF) is regarded as the gold standard for the detection of CNS inflammation13, In usual case control studies done previously, OCB is detectable in about 95% of patients with clinically definite MS and 10-15% of controls9,14. OCB are routinely found in encephalitis and meningitis caused by various agents e.g. enterovirus, HSV­1, HIV, measles and even bacterial infections15,16. The objective of our study was to observe the sensitivity and specificity of OCB in multiple sclerosis and to find out the percentage positivity of OCB in other neurological diseases. The method used for the study of CSF was electrophoresis.

A total of 603 CSFsamples were received by the Clinical Laboratories, Department of Pathology, Aga Khan University, during a period of 54 months (January 1993-June 1997). All of these were subjected to protein electrophoresis. One hundred and thirty-three of 603 samples showed evidence of OCB. Of the 133 patients, twenty-four were registered with the Section of Neurology, Department of Medicine, The Aga Khan University Hospital, Karachi who were finally selected for analysis. The criterion for selection was that the registered patients with Section of Neurology, Department of Medicine, The Aga Khan University Hospital and the inpatient records would be available for review. We did not perform an age, sex and duration matched study because the number of pairs which matched for age, sex and duration from the very start were insufficient. The CSF samples from these patients were obtained by lumbar puncture. Relevant clinical details such as age, sex and clinical presentations were also recorded. Other parameters taken into account during collection of data, included signs and symptoms of the disease process and other investigative techniques performed.
Sample analysis
These samples collected were coded and sent to the laboratory for blind analysis. Classical protein electrophoresis was done as described by Teitez17. The formula used was lgG/albumin index18 given below: IgG (CSF) x Albumin (serum)fLgG (serum) x Albumin (CSF)
The principle of electrophoresis is electrophoretic separation on agrose medium with a subsequent blotting with nitrocellulose membrane and visualization of separated protein bands with gold stain.
As a routine 5 micro liters unconcentrated CSF was used. If concentration of CSF protein was found more than 70mg/dl, then CSF was diluted as required. Reagents used were Agrose gel (usually serum protein gel is used), Nitrocellulose membrane, Filter papers, Gold Chloride (Chloro-auie acid), Stannous Chloride, HCI Tween20 and Anhydrous Citric acid. Instruments in use were Beckman electrophoretic chambers, Electric shakers and heavy weights to press the gel.
Procedure
One positive and one negative control with each strip containing 8 patient samples were prepared. Electrophoresis procedure was performed for 30 minutes at constant voltage using the setting of 100mV.
For blotting, nitrocellulose membrane was used. After electrophoresis completion, the gel was removed from the chamber and placed in a clean dry surface. The gel was over layered by sheet of Nitrocellulose membrane and then pressed with few absorbent papers by keeping heavy weights on them for 30 minutes.
Incubation Gold Stain was prepared by adding to 75ml of deionized water the following reagents drop wise with vigorous mixing: 1 ml of 1% aqueous gold chloride, 0.4 ml of 1% stannous (prepared by dissolving 0.1gm stannous chloride in 0.5ml of 1M HCI and mixing to 10ml water to give a cloudy solution), 10 ml of 2% aqueous Tween2O and finally 25 ml of 9.6g/l of anhydrous citric acid.
After removing the filter papers, the lower sheet was immersed in the Gold Stain at room temperature. Staining was completed within 1 hour; after which the membrane was washed thoroughly with water and interpreted and then stored after labelling. The results were visually interpreted by finding a characteristic OCB in the gamma globulin region.

Twenty-four patients from the 133 positive samples were identified and included in the study for final analysis. There were 19 males and 6 females with a mean age of 28 years (range 10-70 years). Fifteen (62%)of 24 OCB positive patients were diagnosed as multiple sclerosis, while four (17%) as subacute scierosing panencephalitis. The remaining five (2 1%) were found to have other neurological inflammatory diseases. Comparison of OCB results was made with other investigative techniques like MRI, AEP, VEP, which could be supportive to the diagnosis of MS. Most of these were concordant with the final clinical diagnosis (Table 1). 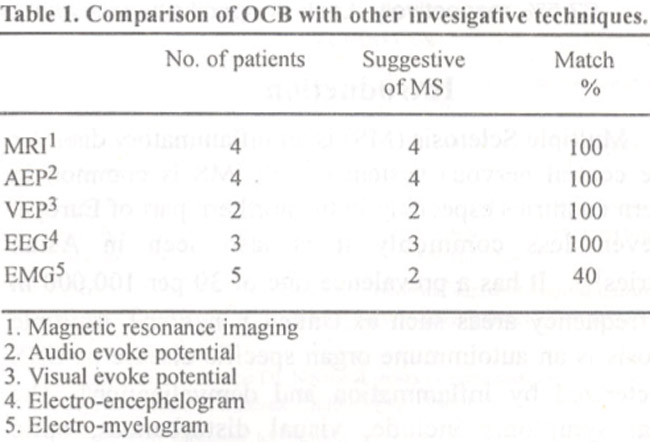 The frequency of presenting symptoms like weakness in arms and legs, fever, vertigo and urine incontinence etc. in cases of multiple sclerosis are shown in Table 2. ). 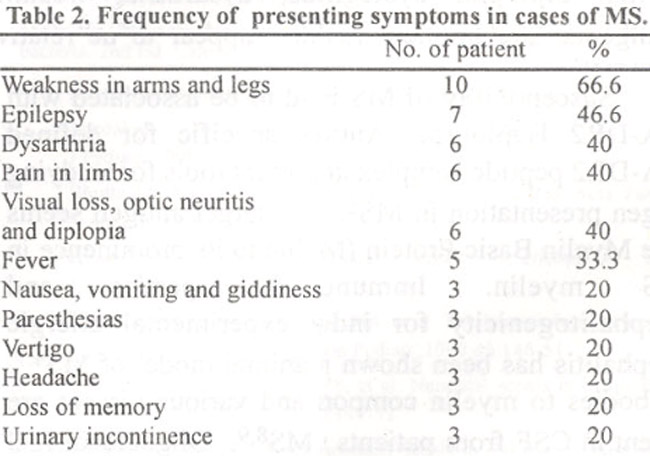 Many studies have been performed in Western countries, to determine the role of oligoclonal bands in the diagnosis of multiple sclerosis and to find out the possible target for the antibodies18.
Studies carried out in the recent past used IEF of OCB as the diagnostic procedure. In most of the studies carried out earlier19-22, OCB was detectable in about 95% of the patients compared with 10-15% of controls. In a study carried out by T. Faukazawa et al.1, OCB in CSF was found to have a lesser diagnostic value in Japan as compared to Western countries.
Our study on OCB in MS is one of very few studies carried out in Pakistan. Cases clinically diagnosed, as multiple sclerosis without oligoclonal bands in CSF are not confirmatory.
The CSF OCB usually differs between patients with MS, but they remain remarkably constant for most patients even over 10 years23,24 and even after immunotherapy25. This phenomenon in addition to temporal separation of multifocal lesions is useful in distinguishing chronic inflammatory conditions, such as MS and SSPE, from acute post-infectious demyelinating diseases13.
As described in a previous study18, the presence of oligoclonal bands was the most sensitive test for MS with a 100% sensitivity rate and a specificity of 82%. The visual evoked response was the next most sensitive study12. The results correlate closely with our local findings.
OCB in definite MS is mainly limited to establishing a diagnosis, but because of their non-specificity, the results must be interpreted in the context of the clinical diagnosis. As the sensitivity is high, all patients with susceptible MS and a normal CSF immunoglobulin, should have other diagnosis rigorously excluded3.
We concluded from our study that oligoclonal bands have high sensitivity for multiple sclerosis; however, specificity of OCB is just 62.50%. This lack of specificity can be attributed to the fact that oligoclonal bands were positive in other neurological disorders.

We gratefully acknowledge the efforts of Farhan Tahir and Najm-ul-Saqib, medical students, Rawalpindi Medical College, Rawalpindi, in collecting the data for this study.