Objective: To study the bacterial pathogens causing neonatal sepsis and their sensitivity pattern so that guidelines can be prepared for empirical antibiotic therapy.
Setting: The study was conducted in the neonatal intensive care unit (NICU) at PNS Shifa (Naval Hospital), Karachi during January 1997 to June 1999.
Methods: Blood specimens for culture were drawn from 520 newborns admitted in a NICU with sepsis. The specimens were inoculated into brain heart infusion broth. Subcultures were performed on days 1, 2, 3, 5, 7 and 10. The isolates were identified by standard biochemical tests. Antibiotic resistance pattern of the isolates was studied by Modified Kirby Baur disc diffusion technique.
Results: A total of 212 organisms were isolated. These included Staphylococcus aureus (n=65), Kiebsiella pneumoniae (n=73), Acinetobacter baumannii (n23), Escherichia coli (n=22), Enterobacter cloacae (n=18), Citrobacter diversus (n5), Peseudomonas aeruginosa (n=4) and group B Streptococcus (n=2). On antibiotic sensitivity testing, 61.54% of Staphylococcus aureus isolates were found to be methicillin resistant. Susceptibility to the other common drugs was also quite low while 89.23% of these were susceptible to amikacin and 100% to vancomycin. More than 90% gram negative rods were resistant to ampicillin and co-trimoxazole. Resistance to gentamicin was as high as 90.4% for Kiebsiella pneumoniae; 60.87% for Acinetobacter baumannii. Resistance to the third generation cephalosporins and the quinolone tested (ciprofloxacin) varied between 25-75%.Majority of the isolates were susceptible to meropenem and amikacin.
Conclusion: In view of the isolation of highly antibiotic resistant organisms, vancomycin in combinaion with amikacin or a carbapenem is the drug of choice for empirically treating neonatal sepsis (JPMA 52:348; 2002).

Neonatal sepsis is one of the major causes of morbidity and mortality among the newborns in the developing world1. It can be defined as “a clinical syndrome characterised by systemic signs and symptoms and bacteraemia during the first month of life”. It is labeled as “Early onset” disease, if it presents during the first 5-7 days of life and “Late onset” if it occurs after the first week. Factors associated with sepsis in newbprns include: low birth weight; foetal distress; low Apgar score; requirement of mechanical ventilation; umbilical catheterisation and history of pre­eclampsia in mothers2. Incidence of neonatal sepsis reported in literature varies from 1-506/1000 live births2-5. Bacterial
pathogens responsible for this serious condition vary with the geographical area and time6. It is extremely important to diagnose the cases in time so that appropriate antibiotic treatment can be given. Moreover, the bacterial pathogens responsible and their susceptibility pattern should be regularly monitored in a hospital setting. The same was the aim of this study, so those guidelines can be provided to the pediatricians regarding appropriate empirical antibiotic treatment of the cases.

The study was conducted at the Department of Pathology, PNS Shifa, Karachi during January 1996 to June 1999. A total of 520 newborns admitted in the NICU with symptoms/signs of bacteraemia/septicaemia or admitted due to other causes an developing sepsis during their stay in NICU were included in the study. A single specimen of two to three ml of blood was collected aseptically for culture from all cases. The specimens were inoculated directly into 30 ml of Brain Heart Infusion broth (Difco). The inoculated broth bottles were transported immediately to the department of pathology and incubated at 37°C. The subcultures were done on blood and MacConkey agar plates on days 1, 2, 3, 5, 7 and 10. The colonies isolated were identified by their colonial morphology. Gram’s stain, conventional biochemical tests (based on the methods of Cowan and Steel)7 and also by using API 20 E galleries (System Montalieu Vercieu, France) for enterobacteriaceae. Antibiotic resistance pattern of the isolates was studied by using Modified Kirby Baur disc diffusion technique8. Staphylococcus aureus ATCC 27853 were included as control strains.

Two hundred and twelve cases (40.76%) out of 520 included in the study, were confirmed as having neonatal sepsis as their blood cultures yielded the growth of some bacterial pathogen. Out of these 152 (71.69%) blood cultures yielded growths on first subculture (on day 1), 28 (13.0%) on 2nd subculture (day 2) and the rest 32 (15.09%) cases on third or subsequent culture. More than 50% of our cases were male (n10). The organisms isolated from cases of early onset sepsis (N170) included Klebsiella pneumoniae (n=67), Staphylococcus aureus (n=4 1), Escherichia coli (n=19), Acinetobacter baumannii (n18).
Enterobacter coloacae (n= 15), Citrobacter diversus (n5), Pseudomonas aeruginosa (n=3) and group B streptococcus (n=2). Similar organisms were isolated from cases of late onset sepsis (n42) but majority amongst these were Staphylococcus aureus (Table 1). 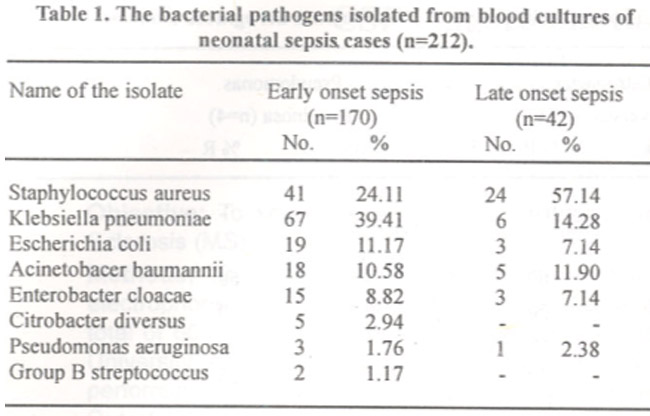 The results of antibiotic resistance pattern of Staphylococcus aureus Klebsiella pneumoniae and Escherichia coli were as shown in Table 2. 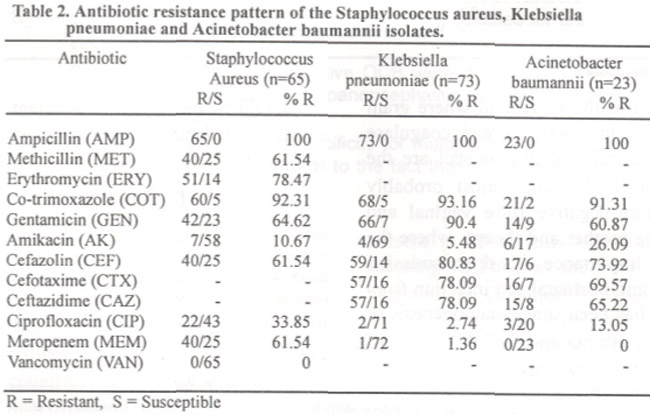 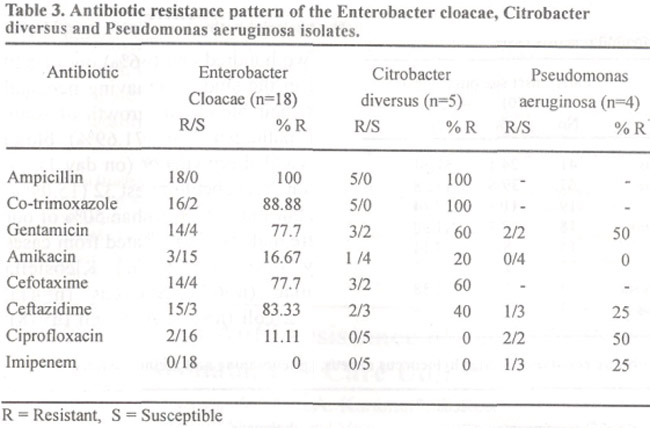 Neonatal sepsis is a life-threatening emergency and any delay in the treatment may be fatal9. Appropriate treatment with antibiotics requires knowledge of common bacterial pathogens involved and their antibiotic sensitivity pattern. Majority of the isolates causing early onset sepsis in our study included gram negative rods (GNR). Gram positive cocci including Staphylococcus aureus and group B Streptococci were responsible for about one fourth of the cases. Similar preponderance of the gram-negative rods has been reported in other studies conducted in Pakistan10,11.
This is in contrast to the studies from abroad where gram positive cocci including Staphylococcus aureus, coagulase negative staphylococci and group B streptococci are the predominant agents12,13. The newborns most probably acquire these gram-negative, rods from the vaginal and faecal flora of the mother and the environment where the delivery occurs. Importance of both vertical transmission from the mother and postnatal acquisition of infection from the environment has been suggested in the pathogenesis of neonatal sepsis by Bhutta and Yusuf in 199714. In case of late onset neonatal sepsis staphylococcus aureus was the predominant agent. This was probably acquired from the hospital environment and the attendants. Antibiotic resistance among the organisms in our study was quite high. More than 90% of the gram-negative rods were resistant to ampicillin (AMP) and co-trimoxazole (COT). Resistance to gentamicin (GEN) was more than 80% and about 70% of these were also resistant to the third generation cephalosporins. More than 90% of GNR were susceptible to meropenem (MEM) and amikacin (AK). A similar high resistance to AMP and the third generation cephalosporins has been reported in a study conducted at Karachi15. In case of Staphylococcus aureus all of our isolates were found resistant to ampicillin while its resistance to methicillin was 61 .54%. But majority of these isolates was susceptible to AK and all to vancomycin (VAN). In this scenario we have to use VAN along with AK, or one of the carbapenems empirically to cover all the possible bacterial pathogens. This situation is serious as these are the last line antibiotics available with us. If we continue using these, resistance will obviously emerge against these as well. To prevent, we should stress more upon preventive measures, so that minimum of our neonates develop sepsis. These preventive measures should focus on recognition of high-risk infant, strict asepsis during labour and early institution of exclusive breast feeding14.