Objective: To assess the efficacy, safety and advantage of direct coronary stenting versus traditional angioplasty and stenting.
Methods: From May 2000 to June 2001, 486 patients underwent PTCA procedure. One hundred fifteen (24%) were considered candidates for direct stenting. Out of 150 coronary lesions, 119 (79%) had direct coronary stenting. In 5% patients stent could not be passed across the lesion. These stents were withdrawn without stent damage and after predilatation the same were successfully deployed.
Results: Primary success rate was 95% . Angiographically assessed success was achieved in all patients with immediate TIMI 111 flow in 97%. The vessels directly stented were LAD 53% , RCA 27% and LCX 18% . Two saphenous vein grafts were also directly stented. The coronary lesions stented were type A 36% , B1 54% and 62 10%. In borderline lesions IVUS was used for quantification of stenosis. There was no in-hospital death, MI or emergency CABG. Compared to traditional stenting there was 46% reduction in procedure time, 62% reduction in radiation exposure time and 35% decrease in use of contrast media. There was also significant (18%) cost benefit in direct stenting.
Conclusion: This study supports the view that direct coronary stenting is feasible and a safe procedure in our population with additional benefits of cost reduction by 18%. We recommend direct stenting in appropriately selected patients (JPMA 52:338, 2002).

Coronary stents have become a mainstay in interventional cardiology ever since two, large, randomized clinical trials1,2 demonstrated that they reduced restenosis and repeat revascularization rates and increased event free survival at 6 months. The standard stent implantation technique requires routine predilatation of the target lesion with a balloon catheter to allow easy and uncomplicated passage of the stent and subsequently complete expansion after deployment. Because of the recent advances in stent design3 direct coronary stenting without predilatation may be helpful in reducing procedure time, radiation exposure, and costs without increasing the risk to patients4,5. Coronary stent implantation without predilatation is feasible for the treatment of coronary artery stenosis in a wide spectrum of coronary lesions.
There are several advantages to direct coronary stenting: shorter duration of procedure time, shorter fluoroscopy time. Use of less contrast medium, lower cost, improved stent positioning to cover the primary lesion and reducing the risk of major dissection. There is less shift of atherosclerotic plaque to the side branches and minimum risk of distal embolization in vein graft6. Another important advantage is the potential reduction of in stent restenosis due to reduced vascular injury as has been shown in an animal study7. The major disadvantage of this method are the potential failure to cross the stenosis with the stent and the potential risk of encountering an undilatable lesion. This study reports the experience of direct coronary stenting at the national institute of cardiovascular diseases (NICVD).

From May 2000 to June 2001, 486 patients underwent percutaneous coronary angioplasty (PTCA). One hundred fifteen patients (24%) were selected for direct stenting without predilatation by two senior operators who independently reviewed the coronary angiograms. Out of 115 patients 29 were adhoc cases and 86 had prior coronary study and were selected for direct coronary stenting.
Inclusion criteria for these cases were Vessel size <2.5 mm diameter, absence of severe coronary calcification, absence of significant angulation (bend _45), lesion length <20mm and absence of total occlusion.
Coronary lesion having diffuse involvement (length >20mm), severe calcification and angulation >45 were not considered suitable for direct stenting. Bifurcating lesions and disease segments having major side branch had traditional predilatation and stenting.
Stent Procedure
The standard Seldinger technique was used to cannulate the femoral artery and whenever alternative arterial access was needed, the right radial artery was used. The femoral approach was i,ised in 93% procedures and radial artery in the remaining. 6 F or 7 F guiding catheters were used. An extra backup or left judkins guiding catheter was used for left anterior descending coronary and circumflex arteries. Right coronary artery was engaged mostly by right judkins catheter. A standard 0.014-inch floppy guide wire was passed through the target lesion in most of the cases. Tubular premounted stents were used and in all cases high-pressure was used for stent deployment (>12 atm for 30 seconds).
The procedure time (the interval between the time of puncture of femoral artery and the time at which patient left the angiography laboratory) and fluoroscopy time were recorded for every procedure. Volume of contrast media used for every patient was noted. Procedural success was defined as technically successful deployment of the stent in the absence of an adverse cardiac event. Angiography success was defined as <20% residual diameter stenosis following final expansion of the stent. Coronary angiography was performed in 2 orthogonal views, and was analyzed by an invasive cardiologist. The vessel size, presenting percent stenosis, and post stenting percent stenosis was determined by visual estimation using the guiding catheter as reference object for calibration. Angiographic measurement were also performed with an automated computer-based system. A clinically significant lesion was defined as stenosis with at least >70% reduction of the reference vessel diameter as assessed visually. Lesions were characterized according to the modified American College of Cardiology/American Heart Association classification8. Angiographic finding, such as lesion type, calcification, thrombus, dissections, side branch occlusion, and vessel rupture, were recorded and analyzed. The occurrence of any of the following adverse events were noted: acute or subacute stent thrombosis, the need for repeated intervention, the need for coronary artery bypass graft surgery, myocardial infarction (Presence of new Q waves of >0.04 seconds, elevation in CKMB more then twice of upper limit of normal) or death in the first month.
On completion of the procedure, patients were moved to a monitoring unit, and the arterial sheaths were removed in the usual manner. Electrocardiograms were recorded immediately after the procedure and daily until discharge. Creatinine kinase estimations were systematically performed 12 to 24 hours after the end of procedure. If the patient had recurrent symptoms after the procedure, additional electrocardiograms and creatinine kinase estimations were performed.

Over a period of 14 months 486 patients underwent percutanous coronary intervention procedures. Six hundred fifty three stents were implanted in 486 patients. One hundred nineteen (18%) stents were implanted directly without predilatation. These direct stents were implanted in hundred nine patients, 82% males and 18% females.
Their average age was 51 years (50.95±9.87). Fifty nine percent had unstable angina, 37% were post­myocardial infarction cases and 7% had a recent myocardial infarction. Coronary lesions of these patients were considered suitable for direct stenting as they fulfilled the selection criteria for direct stenting. Left anterior descending artery was the commonest (53%) coronary vessel directly stented. Thirty one (27%) right coronary arteries and twenty two (16%) circumflex coronary arteries were stented without predialatation. Two saphenous vein grafts were also directly stented. Thirty-six percent lesion were type A, 54% type B1 and 10% type B2. The quantitative angiographic data are presented in table 1. In 95% of cases direct coronary stenting was successful. In 6 (5%) patients with single vessel disease the stent which could not be passed into the lesion, was successfully withdrawn without stent loss or damage and implanted after predilatation. Final angiographic success was obtained in all patients. Angiographic findings showing residual stenosis of less then 20% after stenting, indicate that desired results were obtained. Immediate TIMI 111 flow was obtained in 97% of the cases. Transient no-reflow was observed in 3 cases and was rapidly reversed by the rescue use of glycoprotein lib/ila receptor inhibitor (abciximab). There were no in hospital deaths, myocardial infarction, repeat percutaneous transluminal coronary angioplasty or emergency bypass surgery. Vascular access-site complications were not documented. The mean stent length used was 12.6 (±3.2) and stent diameter of 3.3±0.32 (Figure). 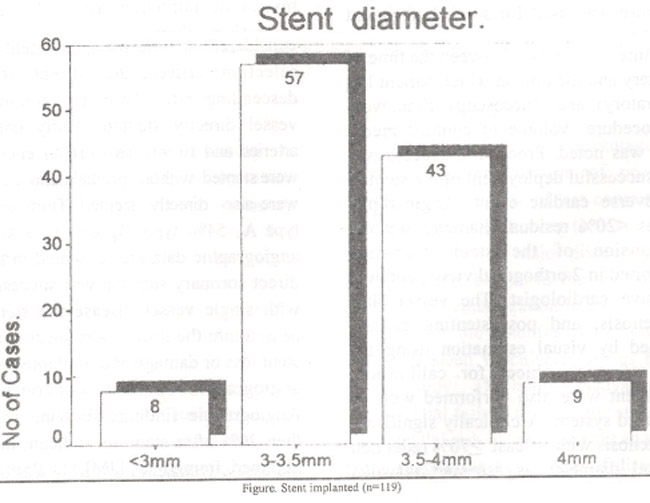 The maximum inflation pressure used was 20 atm and mean 14.3±2.4. The procedure time, radiation exposure time and volume of contrast used were recorded in patient having direct stenting and those with traditional angioplasty with stenting, (Tables I and 2).

There was significant reduction in procedure time (46%) radiation exposure time (62%) and contrast volume used (35%). There was also significant cost saving of about 20-25 thousand rupees per case in direct stenting. Statistical analysis and graphics were done on SPSS version 8. Data are presented as mean value ±SD or percentage. Differences in categorical variables were analyzed using Chi-square test. A p value <0.05 was considered significant.

Direct coronary stenting without predilatation is a feasible and safe therapeutic approach. In our experience it was successful in 95% of the patients with various clinical status. The complications occurred rarely and no patient had stent loss, whereas dissection after the stent deployment was observed in <2% successful direct coronary stenting. Thus, the lack of predilatation of the stenotic segment in direct coronary stenting does not seems to predispose to this complication, and may actually decrease its occurance. A recent study9 reported a direct coronary stenting success rate of 86% and Herz etal10 reported a 10% risk in primary failure, which was greater with lesions involving the left circumflex coronary artery (17.2%) then the left anterior descending artery (6.5%). A potential limitation of the direct stenting approach is the occasional event of incomplete balloon and stent expansion in a calcified lesion. We did not encounter this problem because lesions with very heavy calcification were excluded.
In accordance with other studies4,5,11 we also found that direct stenting without predilatation significantly reduces stent implantation with predilatation. In particular, procedure time was decreased by 33% radiation exposure by 25%, contrast agent used by 18% and cost by 19%4,5,11. In our study procedure time was decreased by 46%, radiation exposure time by 62% and 35% less contrast volume was used in direct stenting without predilatation. There was 25 to 35 thousand rupees cost saving per patient in direct stenting.
In direct stenting without predilatation excellent Catheter backup support is mandatory as in all stenting procedures. When resistance is encountered during attempts to across the lesion, the pressure applied should be constant rather than intermittent.
Mild backward traction of the guidewire and probably wires with a stiffer shaft to provide extra support may be helpful in this setting. Current developments in stent construction and delivery systems permits direct stent implantation in patients with tortuous coronary anatomy and severe artery lesions. The potential of this implantation technique in minimizing vessel trauma and reducing the incidence of late restenosis has been illustrated by Roger, et al.7,12,13. They showed in an animal model that a direct stenting approach can limit the extent of endothelial ablation and reduces the severity of neo-intimal hyperplasia. Long term studies are needed in local population to see the endothelial response and in stent stenosis in direct coronary stenting. Selection of coronary lesion for direct stenting is very important. Moreover use of intra coronary ultrasound would have provided insight into the exact impact of this method on the arterial lumen and on stent expansion.
In this single Centre study we found that direct coronary stenting seems to be a safe and feasible procedure that provides a way to contain cost and shorten procedure duration and radiation exposure time. This approach may be performed using the commonly available stents and delivery system.

We gratefully acknowledge the help of Syed Shahab, Abdul Qayyum and other staff members of cath lab for collecting the data .We also appreciate Engineer Nadeem Ahmed and Dr. Junaid Alamgir for their help in typing and computer works.