Differences in Clinical Presentation of Pulmonary Tuberculosis in association with Age

Tuberculosis is one of the important communicable diseases world wide.1 The incidence of tuberculosis has been increasing globally, almost 2 billion people (one third of the world\'s population) around the globe are infected with M. tuberculosis.2 It is the world\'s biggest killer by a single pathogen causing the death of three million people every year, which is equal to approximately 6% of all the deaths worldwide.3 Some studies have shown that the diagnosis of TB in elderly is frequently delayed or found at autopsy.4-11 However others suggested that the pattern of TB in the elderly is so characteristic, that it should be given a separate classification.12 In this prospective study we tried to evaluate, whether there is any difference in presentation of young and elderly patients with pulmonary tuberculosis, as the incidence of tuberculosis in our population is very high.

This study was conducted between Dec, 1999 to May, 2000 in newly diagnosed patients of pulmonary tuberculosis, at the Department of Thoracic Medicine, JPMC, Karachi. Demographic data, presenting symptoms, radiographic appearance, weight of the patients, AFB smear either sputum of gastric lavage (those who failed to produce sputum) were collected. The patients were divided into two groups (1) younger (<60 years) and elderly (>60 years) age groups. The difference in presentation of the two groups were analyzed for statistical differences, chi-square test was used for testing difference of percentage and student\'s t-test was used for testing difference of means. The P<0.05 level of significance was adopted. 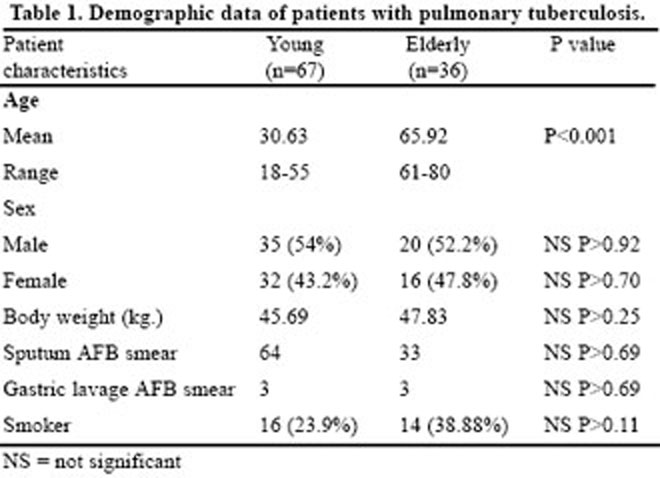 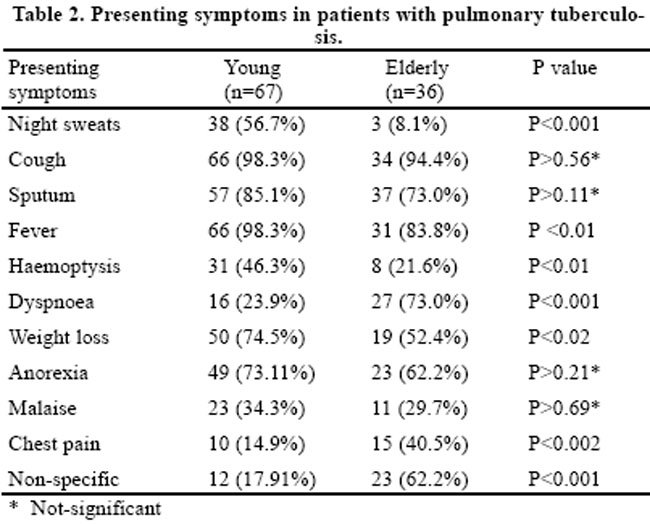 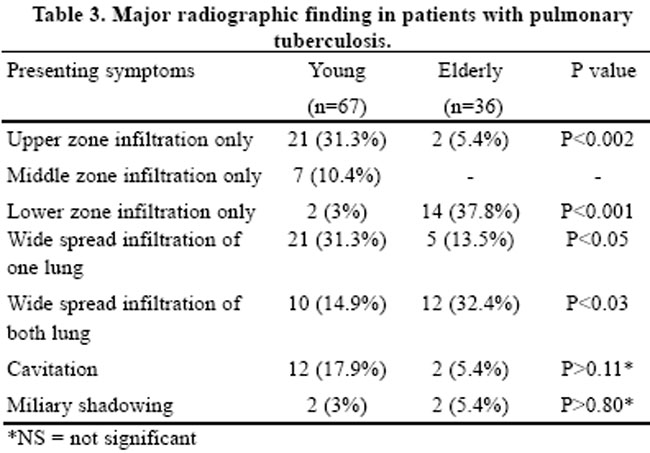 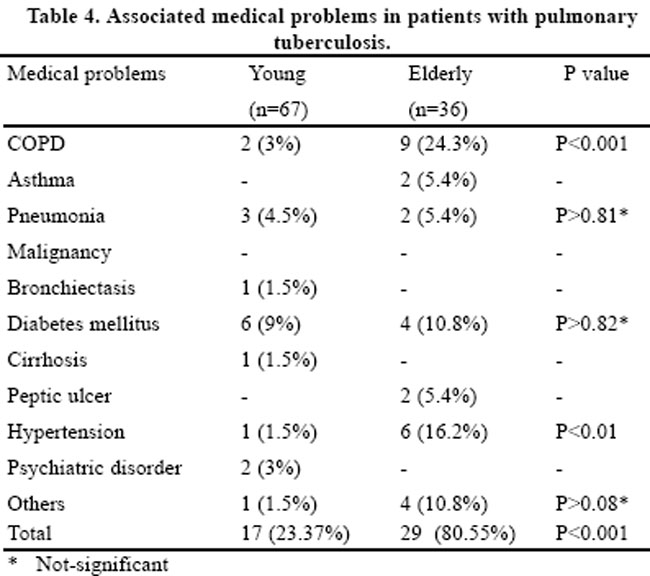 The diagnosis of tuberculosis in elderly is frequently made only at autopsy.4-11 The delay in diagnosis has often been attributed to atypical clinical and radiological presentation.13 Many studies have compared the clinical presentation of pulmonary tuberculosis in young adults versus the elderly.8,16-20 Morris went on to state that elderly patients with pulmonary tuberculosis had a different disease.12
In the present study we have found that non-specific symptoms are more commonly present in elderly patients. They may therefore be treated for other medical illness initially. There may be a considerable delay before the diagnosis of TB is finally made.
Dyspnoea is more common in patients in the elderly age group, and could be due to the higher incidence of smoking, COPD and more extensive lesions.
Haemoptysis is more common in patients with younger age group and is probably related to a higher incidence of cavitation.
Cough was a common presenting symptom in both groups. Although many elderly patients have other associated medical problems which may give rise to cough, such as chronic bronchitis, emphysema, asthma and malignancy, this symptom should be evaluated seriously particularly if it prolonged and not responding to treatment.
With respect to the difference in radiological findings between the two groups, Some studies found there was no difference.16 Teale C, et al suggested that in the elderly there is a shift toward less common presentations such as lower zone and miliary shadowing.21 In our study lower zone infiltration only, occurred more frequents in elderly patients.
The findings of our study are consistent with most of international studies.

Our study showed that elderly patients with pulmonary tuberculosis were more likely to present with dyspnoea and non-specific symptoms. Similarly radiographic appearance were atypical viz lower zone infiltration and bilateral extensive lesions were more common in this age group.
On the other hand younger patients presented with classical symptoms of TB, and also had greater frequency of upper zone infiltration on chest radiograph. A knowledge of these differences should help make an earlier diagnosis of pulmonary TB, especially in the elderly in whom it may be often delayed.

Is Ministry of Health fully prepared to implement an Effective DOTS Program in Pakistan? An Operations Research on TB Control Program in the Public Health Sector in Sindh