Congenital choanal atresia (CCA) is the developmental failure of the nasal cavity to communicate with nasopharynx. Surgical repair is recommended in the first weeks of life in bilateral cases because this is a life-threatening situation in newborns. This is a case report of a full term, healthy newborn baby presenting with intermittent attacks of cyanosis and respiratory distress soon after birth. On examination, alternating cyanosis and normal colour was observed in the infant. The insertion of nasal catheters in both the nares revealed the diagnosis of bilateral CCA. For this rare condition, conservative management was followed with elective transnasal endoscopic repair to relieve the life threatening nasal obstruction at the tenth day of life.

Congenital Choanal atresia (CA) is a rare malformation that causes airway obstruction in newborns and infants, with an incidence of 1 in 7000 to 8000 births. It seems to occur more commonly in females than males and is frequently unilateral and right-sided than bilateral.1 The atresia maybe classified as bony, mixed bony and membranous or purely membranous although the latter is rare. Nature of the obstructing atretic plate has often been described as 90% bony and 10% membranous. Most cases of CA are isolated malformations, but association with other congenital deformities is not an exception, as in the CHARGE association (a malformative syndrome that includes coloboma, heart disease, CA, retarded development, genital hypoplasia, and ear anomalies, including hypoplasia of the external ear and hearing loss).1 Bilateral Choanal atresia is a medical emergency, because maintaining an airway and relieving the obstruction is a priority.2 Increased cyanosis and death may occur if appropriate treatments are not available. The immediate management of neonates presenting with intermittent cyanosis is the insertion of an oral airway and feeding via an oro-gastric tube.12 There are numerous methods for correcting this condition, commonly used methods are the trans-palatal approach,2 the trans-septal approach,3 and the endoscopic transnasal approach.4 Diagnosing and managing this rare neonatal emergency in a symptomatic neonate with bilateral choanal atresia, requiring transnasal repair using a telescope and powered instrumentation with postoperative stenting at a very early postnatal age of 10 days is presented.

A 3.2 Kgs term neonate was born to Gravida 3, Para 1+1 mother via Emergency LSCS, due to non progress of labour. She was born with APGAR score of 8/1 and 9/5. Soon after birth the baby developed respiratory distress with cyanosis. On pulse oxymetry her PaO2 was 88% at room air. The baby was shifted to NICU for further evaluation and management.
The examination in the NICU, revealed an active vigorous baby with intermittent cyanosis.
The cardiac examination did not reveal any murmur or signs of failure and apart from soft tachypnea of 60 to 65 breaths /min, there were no other obvious signs of respiratory distress, yet the neonate required 30% FiO2 to maintain oxygen saturation up to 95%. The intermittent cyanosis would resolve with the baby becoming spontaneously pink on crying. Rest of the systemic examination was normal.
A differential diagnosis of presumed sepsis, cyanotic congenital cardiac disease, and Transient Tachypnea of newborn was made. A chest X ray was done which was normal. Septic markers including Complete blood count, C - Reactive protein and Blood culture were sent. The finding of intermittent cyanosis (which resolved on crying) concomitant with an unremarkable respiratory and cardiovascular examination prompted us to exclude the possibility of Choanal atresia. A size 5 French suction tube was passed into the nasal cavities but it failed, hence further workup was planned to confirm the diagnosis of bilateral Choanal atresia.
The baby was stabilized, and airway was maintained via a soft rubber nipple. The tip of the nipple was cut, and placed in the neonate's mouth to facilitate breathing. It was secured with tape and thereby an airway was created (Figure-1). 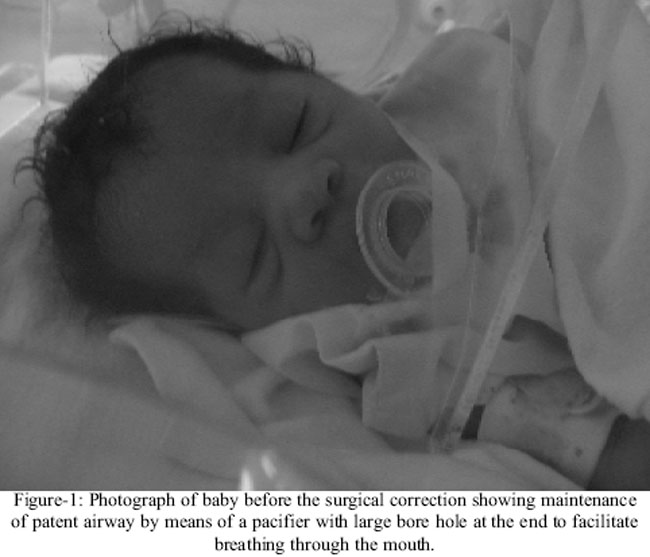 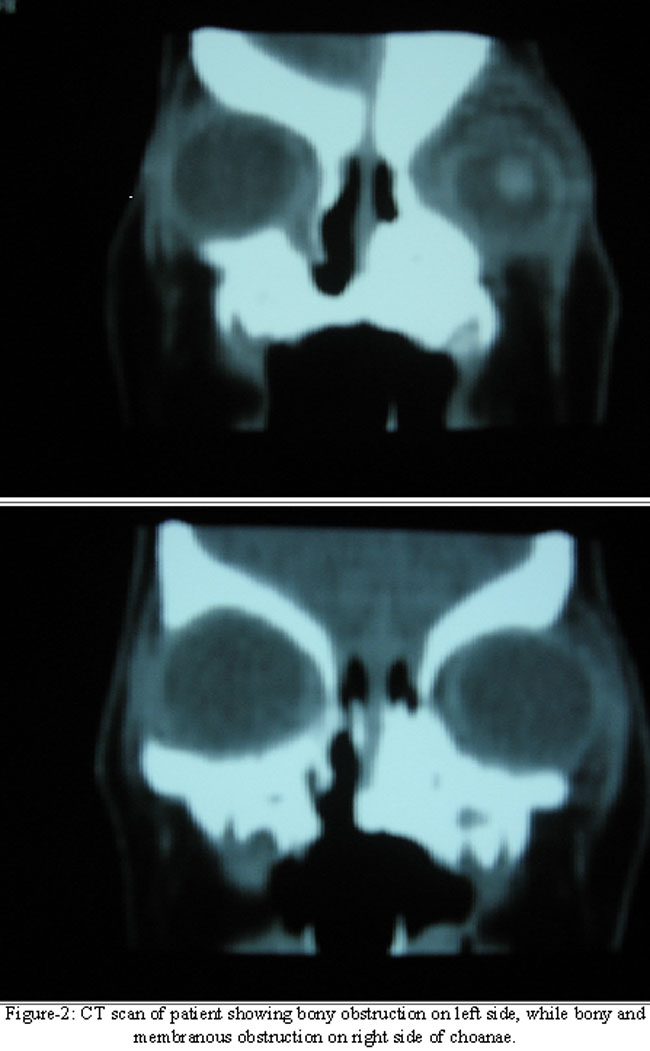 An ENT consult was sought for early surgical corrective repair of the bilateral choanal atresia as the baby had intermittent episodes of cyanosis each time the airway was compromised, especially during sleep. Baby was kept in NICU, for monitoring purpose. She was started on feeding via oro- gastric tube and tolerated feeds well. A surgical correction of bilateral Choanal Atresia was carried out on the 10th day of life. Surgical finding was bilateral complete Choanal Atresia, which was partial bony and membranous on left and complete bony on right. During surgery the right posterior choanae was opened with probe and the diameter was increased with bone nibbler and debrider, while left posterior choanae was opened with suction, bone nibbler and debrider. After surgery Nelaton tube size 14 French was placed bilaterally and stitched anteriorly with silk (Figure-3). 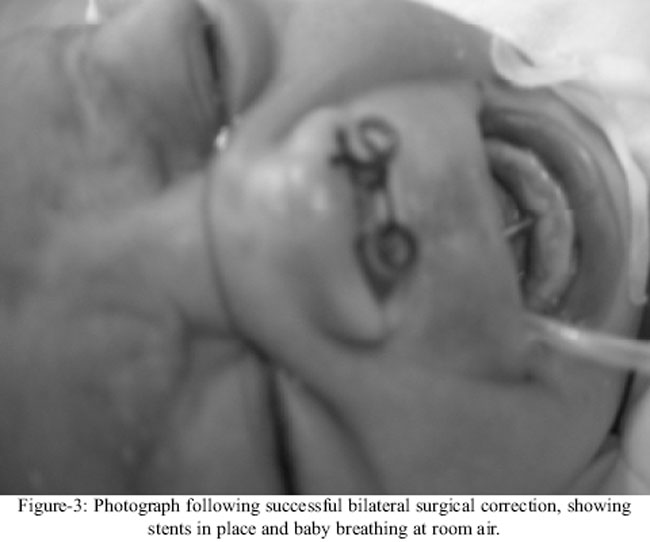 Baby remained stable postoperatively and was discharged from hospital on 4th post operative day. She was on breast feeding at the time of discharge and the tube was removed after three weeks of surgery. Patient was followed up and was doing well at the last follow up at age of four months.

Congenital Choanal atresia is a disease of nasal airway where no connection exists between the nasal cavity and the aero digestive tract. It was first described by Johann Roderer in 17551 Male to female ratio is (1:2) and unilateral atresia is more common than bilateral. It is a rare congenital disorder occurring approximately one in 7000 live births.2,3 Atresia itself may be classified as bony, mixed bony and membranous, and purely membranous. Current theories of Choanal atresia embryogenesis cite either failed oronasal membrane rupture or abnormal migration of neural crest cells into the nasal vault.4,5
Bilateral Choanal Atresia causes complete nasal obstruction — immediate respiratory distress and even potential death due to asphyxia (because newborns are obligate nose breathers until approximately 4-6 weeks at which time mouth breathing is learned. The respiratory obstruction is cyclic — as the child falls asleep the mouth closes and a progressive obstruction starting with stridor followed by increased respiratory effort and cyanosis. However, a high level of suspicion is required to diagnose bilateral choanal atresia. Symptoms of airway obstruction and cyclical cyanosis are the classic signs of neonatal bilateral atresia. In our infant we did not consider bilateral congenital atresia as our primary diagnosis at birth in the delivery room. It was only when the neonate was transferred to the NICU for evaluation of soft tachypnea and intermittent cyanosis that the possibility of Choanal atresia was considered by the Neonatal team. The diagnosis was confirmed when the 5 F nasogastric tube failed to pass through both the nares down to oropharynx.
Absence of misting on a metal plate or the movement of a wisp of cotton wool in front of the nostrils are other bed side methods used for the diagnosis of choanal atresia. Since it is a rare disorder especially the bilateral variety, it is most likely not considered in newborns with respiratory distress and is usually an incidental discovery.
Most cases of CA are isolated malformations, but association with other congenital deformities is not exceptional and has been reported in literature, as in the CHARGE association. Therefore the clinical evaluation should include a complete physical examination to look for other congenital anomalies and a complete nasal and nasopharyngeal examination to assess the deformity. This can be performed using flexible fibreoptic endoscopes. We unfortunately did not have the availability of a neonatal fibreoptic endoscope so the diagnosis was confirmed by the traditional naso pharyngeal Choanography followed by the Computed tomography scan (CT).6 Choanography (administration of radiopaque dye in nares) has been the traditional method of confirming the diagnosis of atresia; the current investigation of choice, however, is computerized tomography. The location and type of atresia confirmed on computed tomographic scan assists the operating surgeon in establishing a treatment plan.
The surgical treatment of congenital atresia is one of the more challenging endeavours within the realm of paediatric otolaryngology. There are numerous methods for correcting this condition, but the most commonly used ones are the transseptal, transpalatal and the endoscopic transnasal approach. The factors that influence the type of approach selected and its subsequent success include the age of the patient, the size of nasopharynx, the thickness of the atresia, bilateral vs. unilateral atresia and the use of post operative stenting.
Stankiewicz7 was one of the first to report the use of Endoscopic instruments for choanal atresia repair. Trans - nasal puncture and dilatation followed by stenting with endotracheal portex tubes for 4-6 weeks is the initial surgical procedure of choice. The type and duration of nasal stenting are important factors in the outcome of choanal atresia. Choanae must be stented for a period of at least 3-4 week.8 The removal of stent tubes must be performed as gently as possible, to avoid trauma and bleeding. Abbeele9 has described multiple complications of stenting that include local infection, formation of granuloma, foreign body reaction, and nasal synechia. This may contribute to choanal restonsis.
Our patient was only ten days old at the time of surgery and had bilateral CCA that was clinically significant. He did not have any other associated anomalies. The infant had to be nursed meticulously ensuring at all times a patent oral airway remained established particularly during sleep and gavage feeding.
He underwent a Transnasal endoscopic repair of congenital bilateral Choanal Atresia with telescopes and debrider. After surgery bilateral nelaton tube size 14 French was placed and stitched anteriorly with silk. This was the first endoscopic surgery performed for congenital bilateral atresia in a neonate of only ten days in our institute. The procedure was successful and baby remained stable postoperatively. She was discharged on breast feeding and the tube was removed after three weeks of surgery. Patient was followed up and was doing well at the last follow up at age of four months.

Bilateral Congenital Atresia is a rare congenital anomaly and a life threatening condition that can lead to asphyxia and long term sequel. Hence it is imperative for the medical and nursing staff and family physicians to have a high index of suspicion when crying alleviates respiratory distress in an obligate nasal breather. It can be diagnosed promptly by inserting 5 F nasal catheters through the nares into the nasopharynx to validate the patency. These infants should have an adequate airway established and secured to prevent intermittent cyanosis and resultant hypoxia till further management with corrective surgery.