Obesity in Adolescents of Pakistan

Obesity in childhood and adolescence is increasing in developing countries around the world.1 It is defined as a condition of abnormal or excessive fat accumulation in adipose tissue, to the extent that health may be impaired.2 Obese individuals differ not only in the amount of excess fat that they store, but also in the regional distribution of fat within the body. The distribution of fat affects the associated risks with obesity and the kinds of disease that result. In the United States, at least 11% to 19% of adolescents are estimated to be obese, (defined as a Body Mass Index (BMI) greater than the 85th to 95th percentiles) according to NHANES 1988 to 1991.3 BMI declines and reaches a minimum around 4 to 6 years of age before beginning a gradual increase through adolescence and most at adulthood. The upward trend after the low point or dip in BMI percentile curves reflects what has been described as the "adiposity rebound." Children whose adiposity rebound begins at younger ages are more likely to have an increased BMI as an adult. The National Health Survey of Pakistan (NHS 1990-1994) data clearly shows the double burden of under-nutrition and overweight in adolescents and adults.4 More adolescents are underweight than overweight while the opposite is true for adults.4 The NHS 1990-1994 revealed that 1% of the population in Pakistan was reported to be obese and 5% overweight in the 15-24 years age group.4
The risk of being overweight in adulthood is greater with higher degrees of being overweight in childhood and in the later adolescent years.5 Being overweight, in turn, is recognized as a significant risk factor for chronic diseases such as arteriosclerosis, ischemic heart disease and diabetes; all of which are major causes of morbidity and mortality.2,6-9 Overweight during adolescence also has social, economic, and psychological consequences, including effects on academic performance and psychosocial functioning. Obesity has numerous socially related consequences in later life such as lower wages, less likelihood of marriage, and less education.10 In Pakistan the disease pattern is currently in a transition from acute and infectious diseases to an increasing burden of chronic diseases, some of which are mentioned above with obesity being one of their major risk factors.1 This study is being conducted to elucidate the knowledge, attitudes and practices of Karachi's school going teenagers regarding healthy eating and body weight and to determine the extent of obesity in these individuals by measuring their Body Mass Index (BMI).

A cross sectional study design with a convenience sample of tenth grade O' level students was utilized. Six schools in Karachi were selected that follow the GCE education system. Students were provided with a self-administered questionnaire.
In order to compute BMI, the height and weight of each student was measured after completion of the questionnaire. For this purpose standardized weighing scales and measuring tapes were used.
The formulae utilized during the data collection process are as follows:
Body Mass Index (BMI) = weight (kg) / height (m)2
The cutoff criteria used for the BMI for ages 2 - 20 years was taken from the National Health and Nutrition Examination survey (1963 - 1991) of USA11: Below 5% percentile underweight (BMI cutoffs = male 16.5, female 16.3)
5 - 85% percentile normal
85% percentile over weight (BMI cutoffs= male 16.5, female 16.3) The food frequency table was later quantified according to the food guide pyramid. Responders were identified to have a balanced diet if they followed three or more of the recommendations of the food guide pyramid.
The data was entered and analyzed on the EPI INFO6 and SPSS version 10, statistical analysis programs. c2 test was used for determining the significance of association between variables was carried out and Odds Ratios were computed.

Among the 234 students to whom the questionnaire was administered, no refusals were encountered. Sixty percent were males, and forty percent were females, the mean age being 14.9 years (SD = 0.57),. Most of the respondents had 2 siblings (35%), 25% had only 1, and 25% had 3 siblings. Those reporting to be an "only child" were 4%. When asked about birth order, 44%, reported to be the eldest sibling. Sixty one percent of the respondents had 5 or less people in the household. Regarding father's occupation, majority were businessmen (35%) and majority of the mothers were housewives (66%). Among the answers received for parental education, the majority identified their parents as having received more than 12 years of schooling: 63% of fathers and 67.5% of mothers had a college level or postgraduate degree. Fifty six percent (56%) were unaware about the combined monthly income of the household. For the number of earning members in the household, 56% had 1 member and 32.9% had 2 earning members sharing 1 kitchen. Greater than 80% of the respondents owned most of the items that were used to identify socioeconomic status.
In our sample, 17% were underweight (below the 5th percentile), 65% were normal weight (5th to 85th percentile) and 18% were overweight (above the 85th percentile). When questioned about knowledge relating to risk factors for being overweight, Ninety four percent of the respondents knew eating in excess or eating specific food products (junk food, fried and oily food, soft drinks and sweets) contributed to being overweight. Sedentary lifestyle was identified by 70% of the respondents as a contributor to becoming overweight. Sixty eight percent of the respondents said both lifestyle and food related factors led to becoming overweight (Figure 1). 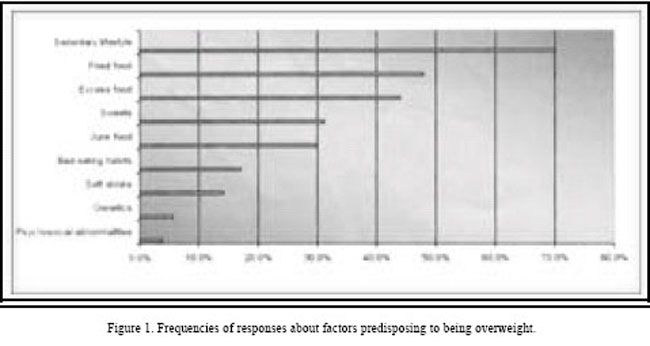 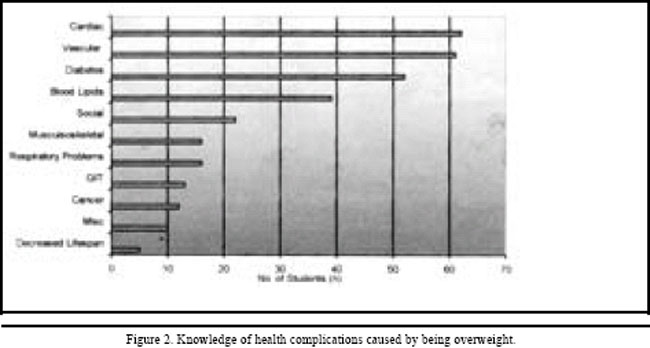 Fifty nine percent of the respondents also mentioned some health problems, which were considered incorrect answers such as 'mental retardation', 'asthma', 'thyroid diseases' etc When asked about what one can do to lose weight, majority of the respondents (96%) listed exercise among their answers. Sixty two percent mentioned dieting. Ninety percent of the respondents mentioned both food related factors and exercise as means for weight reduction (Fig. 3). Among incorrect responses were non-exertional activities (e.g. sleeping) (12%) and smoking (2%).
Of the 234 respondents, 228 gave their opinion about which gender they thought was more prone to being overweight. Of these 19% felt males were more prone to being overweight whereas 58% perceived females to be more vulnerable and the remaining 23% did not know which gender was more prone to being overweight. The odds of females perceiving their own sex to be overweight was 2.29 times more than the male perception of their own gender (CI 95% 1.02<5.19, p-value of 0.02). Among the 234 respondents 28% perceived themselves to be overweight. Eighty seven percent of those who were overweight and eighty two percent of the respondents who were not overweight correctly perceived so.
The meal patterns of the sample were explored as well. Fifty five percent of the respondents had 3 meals a day, of which 24% prepared their own meals. Fifty one percent of the students had breakfast on a regular basis. Among those who did not have breakfast, 45% did not do so because they did not feel hungry, 34% had no time and 9% felt sick if they had breakfast. The majority ate in the company of others (61%), whereas 39% ate alone more than 2 times during the week. Eighty three percent had snacks between meals, the number of snacks per day ranged from 1 (53%) to 4 (3%). Seventy seven percent of the respondents did not prepare their own snacks or meals whereas 24% did. The association of gender with number of snacks a day was found to be insignificant (p-value >0.05). The results also showed that underweight people were more likely to have 1 or more snacks daily, whereas overweight respondents were less likely to snack between meals. (OR 0.2 CI 95% 0.1<0.6 p-value <0.01).
With regard to their activities, majority (85%) spent their leisure time on the computer, 58% reading books, 49% studying, 31% playing indoor games and 53% playing outdoor games. Of those who responded, 63% considered themselves to be active, whereas 22% did not. A large number (65%) had planned activity of 20 minutes per day greater than 3 times during the week apart from the school based activity. The majority, 67%, exercised or played games because they enjoyed it, 16% did it to control weight. Cross-tabulations showed more males than females exercised to lose weight (OR 2.9 CI 95% 1.6<5.3, p-value <0.01). There was no association between the activities the person spends during their free time and BMI.
When questioned about their sources of information regarding being overweight, 42% of the respondents identified school as their source of information. Books, magazines and newspapers were reported by 59% of those interviewed. Fifty two percent listed television, and 40% named the Internet as their source of information. Majority of the respondents, (71%), listed friends to be a source. When asked about reliability, 71% of the respondents felt books, newspapers and magazines were a reliable source of information regarding obesity. Fifty nine percent also thought television was reliable. Only half of the respondents listed the Internet, 49% mentioned friends and 40% reported school to be among reliable sources of information on this topic.
Specific food items consumed in the previous 24 hours from a standard food frequency chart was tested for its association with to BMI. The study population was stratified according to sex and a significant difference in the BMI between the two genders was found. Males were more likely to be overweight as compared to females (OR 2.6, CI 1.2<6.0, p value = 0.012).
BMI and sex were individually cross tabulated with having a balanced diet. Those who followed three or more recommendations of the Food Guide Pyramid were less likely to be overweight. (OR 4.4, CI 95% 1.2<18.5, p-value 0.01).
According to the criteria of a balanced diet (based on the food pyramid - we assumed those following 3 or more of the guidelines as following a balanced diet) 50 of the 234 respondents were following a balanced diet whereas 184 were not. Amongst those who followed a balanced diet 56% were males and 44 % were females. There was not a significant difference between the sexes.

Objectives:
To elucidate the knowledge, attitudes and practices of Karachi's school going teenagers regarding healthy eating and body weight and to determine the extent of obesity in these individuals by measuring their Body Mass Index (BMI).
Setting :
Tenth grade O' level students from six schools in Karachi.
Method:
A cross sectional study design with a convenience sample of students who were provided with a self-administered questionnaire. In order to compute BMI, the height and weight of each student was measured after completion of the questionnaire.
Results:
Seventeen percent students were underweight (below the 5th percentile), 65% were normal weight (5th to 85th percentile) and 18% were overweight (above the 85th percentile). Regarding knowledge about health problems arising due to being overweight, 90% knew being overweight was harmful to health. When asked about what one can do to lose weight, 96% listed exercise among their answers. The results also showed that underweight people were more likely to have 1 or more snacks daily, whereas overweight respondents were less likely to snack between meals. (OR 0.2, p-value <0.01).
Conclusion:
Given the prevalence of overweight individuals, it is important that work be done with regard to tackling this health issue, which is of significant consequence in the long term. Emphasis should be on promoting low intensity long duration physical activity that can be conveniently incorporated into daily life. There is a need for more based studies be conducted in schools and in the general population so as to establish guidelines on nutrition and weight status for the Pakistani people (JPMA 53:315;2003).