Pragmatic Solutions for Problems in the Undergraduate Medical Programmes in Pakistan

Reforms in the Pakistani undergraduate medical education have remained elusive for decades. An attempt is made to highlight the importance of research-oriented education and problem-based learning to Pakistani medical schools. Possible causes are analyzed and implementable solutions are suggested with appropriate references from literature search. An innovative “Research Ladder” approach to implementing a research-oriented curriculum that culminates in attainment of a combined MBBS-BRS degree is also proposed. In the end, techniques for making existing lecture-based learning more interactive are suggested (JPMA 52:331 ;2002). 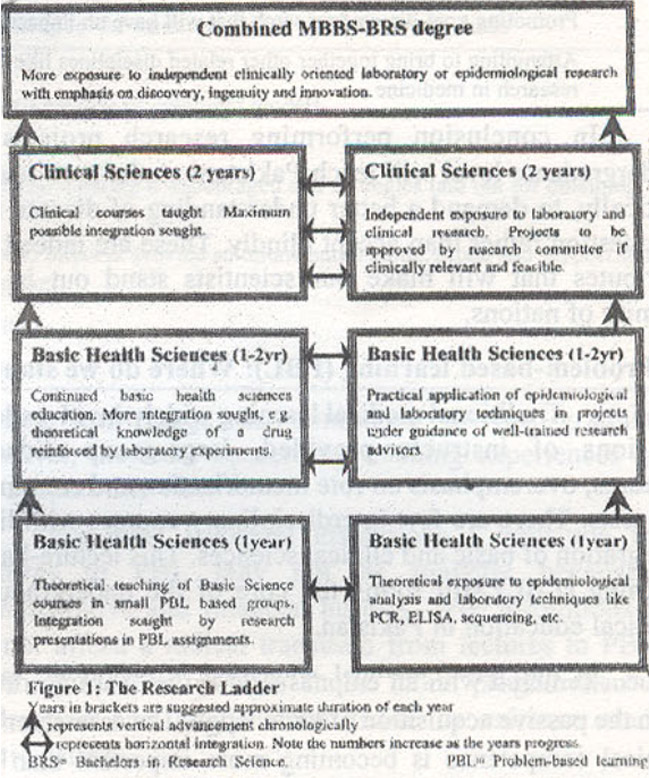 The research ladder starts off with basic training of laboratory techniques, biostatistics and epidemiology. Each higher rung proposes a more complex approach to research and emphasizes greater clinical integration, eventually culminating at the undertaking of an independent research project in the final year of undergraduate medicine. All aspects of laboratory and epidemiological research are assessed by a research committee to be clinically relevant to the health-care needs.
After this rigorous training, the students as an incentive are given a combined degree of MBBS-BRS (Bachelors in Research Science).
Graduate students can be offered further opportunities to work with professionals on laboratory and epidemiological projects in their respective areas of interest. It is hoped that this combined MBBS-BRS degree will serve the same role as the combined MD-PhD programs that were started in the U.S. in 196420. Recent data has demonstrated that dual MD-PhD graduates in the U.S. are fast becoming the leaders of biomedical research in clinical departments21,22. Analysis of combined MD-PhD graduates has confirmed that the majority become dedicated investigators, prolific authors and active participants in academic medicine23,24.
Further solutions for integration of research in the undergraduate curriculum are highlighted in Table 1.

In conclusion performing research projects at undergraduate level will teach Pakistani students to reason critically, to demand a better understanding of disease and to question rather than accept blindly. These are indeed the attributes that will make our scientists stand out in the corn ity of nations.
2.   Problem-based learning (PBL): Where do we stand?
Traditional medical learning widely involves long sessions of instructor-provided, large-group didactic lectures, overemphasis on rote memorization and cramming for tests. There are few interdisciplinary courses with little integration of basic and clinical sciences. This lecture-based learning (LBL) still forms the core of the undergraduate medical education in Pakistan.
Students undergoing PBL learning have reported it to be more relevant, flexible, stimulating and engaging26-32. They have also reported more positive perceptions and an overall greater satisfaction about their learning process compared to their colleagues who underwent lecture based learning. And indeed a supportive medical school learning environment promotes student achievements. Moreover Table 1. Suggestions for promoting undergraduate medical research.
In the West, medical education is becoming more student-centered with an emphasis on active learning rather than the passive acquisition of knowledge. The assessment of clinical competence is becoming more important than the ability to recall unrelated facts. Problem-based learning (PBL) is fast becoming an integral component of this newer approach. PBL had its roots at McMaster university in the late 1960’s,25 and since has spread throughout North America and in other parts of the world26,27. The theoretical basis of PBL is a student-centered approach in which the student is actively involved in identifying learning objectives, selecting personal learning resources and setting boundaries for individual study28. The most fascinating aspect of PBL is an ability to make an association between an external stimulus or situation and the concepts stored in memory.
comparison of United States medical licensure examination (USMLE) scores has shown that PBL graduates perform at levels comparable to or higher than their conventional counterparts30,31,33. PBL learning also allows students to explore special interests which can help to promote research and innovation19,28.
Approaches to integrate Problem Based Learning in the Undergraduate medical education in Pakistan:
In a Pakistani setting, any of the following three approaches may be employed to adopt problem-based learning in the undergraduate medical curriculum.
1.     Initially an attempt to integrate some of the aspects of PBL into the existing lecture-based learning can be tried, for example, fewer lectures and increased emphasis on the study of patient problems. As the benefits of problem-based learning become more apparent in Pakistan, a complete adoption of PBL can be advocated.
2.     The second approach can be to set up two separate groups of learning: one small problem-based curriculum group and another traditional lecture based curriculum group. Students can be randomly assigned or voluntarily asked to join either group with continuous assessment and evaluation.
3.     A third approach can be to adopt PBL in some disciplines, for example, anatomy and maintaining an LBL approach in others, like physiology. Students’ performance and perception can then be compared and a final consensus to fully adopt PBL can be taken.
There is no evidence to suggest that either approach is better than the other. In the Pakistani setting, investigation into the future implications of PBL should be conducted before a final decision to fully adopt it, is made. This will not only enable a scientific approach towards a radical change but will also ensure that no aspect of this reform is ignored. Continuous evaluation and assessment of PBL are therefore essential components of future reforms. Two instruments that can be used in the assessment process are the Cognitive Behavior survey and the Medical School Learning Environment survey34,35. These surveys typically test teaching, administration, psychological aspects of student life and intellectual climate.
Further means of implementing PBL into the undergraduate curriculum in Pakistan are highlighted in Table 2.

The positive attiude towards learning imparted a problem-based curriculum will definitely carry over with the medical students into their practice year and affect their desire and attitudes towards future learning. All this will set the foundation of a progressive health care system, the hallmarks of which will be critical thinking and research.
How can lectures be made more interactive?
Lectures remain the most widely employed technique for teaching medicine all over the world. When done interactively, lectures can allow students to learn new material, explain different concepts and promote problem solving and challenge attitudes36. However, the role of lectures in effectively transmitting knowledge has been criticized widely. They are considered by many to be a relatively poor means of sharpening skills and formation of life-long learning attitudes37,38.
Interactive lecturing means active participation of the students, ensuring that they are no longer passive in the learning process36. The main reasons that prevent faculty from delivering interactive sessions are fear of loosing control over the students and the teaching material or fear of not covering all the contents36. Additional fears include anxiety about not knowing the answer to a question posed, concern that a “dominant” group will take over and fear that no one will respond to questions asked. Time constraint is also a frequently cited reason for not delivering interactive sessions. Many faculty members believe that interactive lectures are not suitable for undergraduates because of their  limited knowledge as compared to post-graduates. However,literature conceing teaching experinces dose not support this view36.
For most Pakistani institutions a transition from lectures to PBL may not be realistic because of administrative and financial hurdles. For institutions that cannot afford a radical transition from lectures to PBL, a more steady nad systematic approach should be tried. Existing lectures can be made more programmed and interactive and every affort made to enhance student participation.

Table 3 lists some of the most commonly employed techniques for making lectures more interactive.
Small group teaching, questioning the audience and the use of live cases promote comprehension, stimulate interest and arouse attention and motivation39. Studies have demonstrated that increased attention and motivation in turn enhance memory and retention of knowledge36,40. These techniques also provide valuable and instant feedback to the teacher and the student alike. Audiovisual aids are used as a trigger to promote meaningful discussion or to stimulate student thinking36. They are also useful for examining student attitudes and skills. Written materials like handouts assist in organization of key concepts and promote retention of information41. They also remove pressure on the teacher to cover everything and on the students to write everything down. Students also achieve higher test-scores from lectures with handouts and the design of the handout can influence note-taking practices36. Similarly, effective presentation skills on part of the presenter like maintaining eye contact can facilitate or hinder interaction.
In short interactive lecturing can be an effective tool to impart knowledge that can stimulate interest of students and be retained longer.

Research-oriented curriculum and problem-based learning are two of the most urgent requirements of Pakistani undergraduate medical education. Together with these reforms, improving upon the existing lecture-based learning will definitely seed a new breed of physicians, better equipped to cope with the challenges of our health care system in the 21st century.

I am greatly indebted to the Faculty at the Aga Khan University for their indispensable guidance and stimulation, without which this endeavor would not have materialized.