Tobacco use among urban school boys of Paschim Midnapore, India

Objectives: To assess the prevalence, perception and pattern of tobacco use among 13-15 years old urban school boys along with associated factors of tobacco use.
Methods: A cross sectional, observational, study was carried out among 454 urban school boys aged 13-15years studying in VIII, IX, X using self administered modified Global Youth Tobacco Survey Questionnaire. Data were analyzed by frequency distribution tables, proportion, line diagram, chi square test as required.
Results: Out of 454 students, 201(44.3%) were ever users of tobacco whereas 135(29.7%) were current users. Majority of the current users utilized both form of tobacco. Initiation of tobacco before 10 years were more in smokeless (11.4%) form than smoking (4.5%), but smokers showed steep rise (49.3%) at 14-15 years. Proportion of current users significantly (p<0.001) increased along with increase in pocket money. Compared to non-users current users had more exposure to tobacco in the family and friends. Both current users and non-users showed positive attitude towards tobacco use. Though knowledge of harmful effects of tobacco was well perceived but significantly more (p<0.005) non-users had shown interest to prohibit smoking in public places. More non-users (75%) than ever users (26.4%) had shown favourable opinion regarding future tobacco use.
Conclusion: Due increased exposure to the world through several ways and increased modern amenities to influence teenagers, there is high prevalence, average perception and variable patterns of tobacco at Midnapore town where tobacco is trapping teenagers which needs proper intervention (JPMA 60:786; 2010).

Adolescents and the young adults are the future of all generations. They are the next pillars of the civilization of a country. And this is the age to think about the new, to do something innovative, and to taste the world without knowing its effect. Thus they are in danger always. As a result they must be handled with care.
Tobacco is the second major cause of adult death and diseases in the world today. Nearly 5 million people die due to tobacco use every year and this figure will increase to 10 million tobacco attributable deaths per year by 2020 with 70% of them occurring in developing countries.1 It has been estimated that an average of 5.5 minutes of life is lost for each cigarette smoke.2
There are over 50 diseases that are caused, increased or exacerbated by smoking. Increased prevalence of use of panmasala and gutkha (smokeless form) among young Indians spawned an epidemic of oral cancer among young populations as revealed by many studies.3-7
The prevention of tobacco use in young Indians where deviation from healthy behaviours often occurs appears as the single greatest opportunity for preventing non-communicable diseases in the world today as it is home to one sixth global population.9
Like other developing countries, the most susceptible time for initiating tobacco use in India is during adolescence and early adulthood, ages 15-24 years while some start as young as 10 years. The early age of initiation underscores the urgent need to intervene and protect this vulnerable group from falling prey to this addiction. The risk of tobacco use is highest among those who start early and continue its use for a long period.9
Determinants of tobacco use among youth may be socio-demographic factors like age, sex, state, region, socio-economic status like urbanicity, environmental factors as use by parents, friends or school teachers, exposure to media, advertisements, Other factors are low awareness regarding tobacco hazards and behavioral intention to use.9,10
ith these perspectives the present study was undertaken among 13-15 years old urban school boys to assess the prevalence, perception and pattern of tobacco use among 13-15 years old urban school boys along with associated factors of tobacco use.

An observational, cross sectional, descriptive type of study was carried out amongst 13-15 years old urban school boys corresponded to grade VIII, IX, X in August-October 2007 in Paschim Midnapore, West Bengal (India).
Institutional Ethical Committee Clearance was achieved first. A written permission to conduct this study among school students was taken from District School Board and also from school authorities. A list of schools (both Government and Private) having grade VIII-X was obtained. Six schools were selected randomly from the list and all the students in classes VIII-X present during the day of survey were eligible to be included in the study. Students\' participation was voluntary and anonymous. Informed consents were taken from the students before participation.
A pretested self administered multiple choice questionnaire in local language derived from Global Youth Tobacco Survey questionnaire developed by CDC & WHO11 was used for data collection after some modification.
Sample size estimation was done by applying the formula 4pq/l2;  where p = the prevalence of the tobacco use (smoking +smokeless, 28.3% from Indian GYTS data 2000-2005);12,13 q = (1-p); l = allowable error 15% of p. Thus sample size become 451. Data was collected from 459 students. In the selected schools each day one class in the morning and one in the afternoon session (library, work education, sports periods) were taken. The entire questionnaire was explained to the students and total confidentially was assured. Class teachers were requested to stay away while the questionnaire was introduced. Students were asked to complete the questionnaire, 459 students were interviewed but 5 questionnaires were incomplete, therefore excluded. So, analysis was done on 454 students. Data were analyzed using frequency distribution tables, proportion, line diagram and chi square test as required. Working definitions are:15
1. Ever user: Person who used tobacco in any form even once in life.
2. Current user: Person who used tobacco within 30 days preceding the survey.
3. Non-user: Those who never tried any form of tobacco products in life.
4. Smoking tobacco: Bidi, Cigarette, Ganja, Hookah etc.
5. Smokeless form of tobacco: Gutkha, Khaini, Betel quid, Dentrifice, snuff etc.

The results in the present study revealed that out of 454 interviewed students 201 (44.3%) were ever user of tobacco and rest (55.7%) had not tried tobacco products ever. Among the study population 135 studied students (29.7%) were current tobacco user also — amongst them 47 students (34.8%) were smoking only 23.7% were using tobacco in smokeless form whereas 41.5% were using tobacco in both forms.

Figure shows the results of Ever-users according to their age of initiation and forms of tobacco.
Another important observation was evident that proportion of current users increased along with increase in pocket money which was not seen in case of non-users. This was also statistically significant (p<0.001). Current users also had more exposure to tobacco from family members and friends compared to non-users  (Table-1). 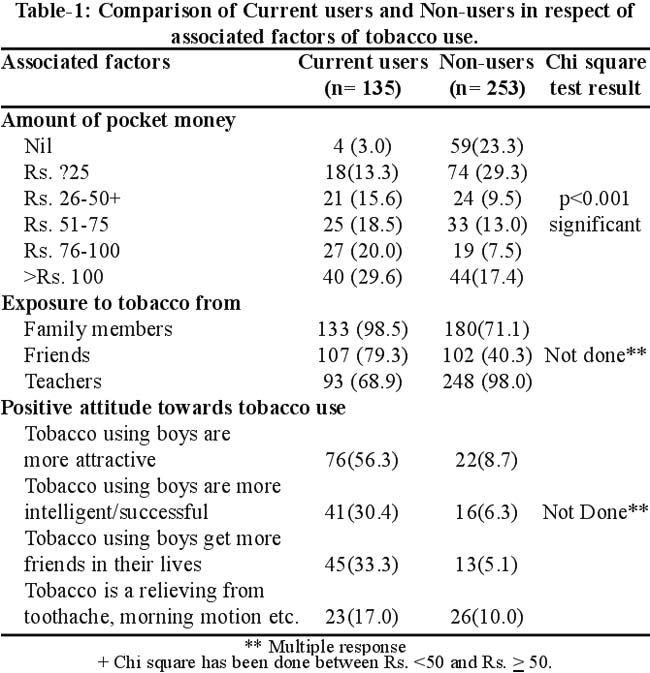 Tobacco users in the school premises were quite high as reported by both non-users and current users.
More proportion of current users had shown positive attitude towards tobacco use than non-users such as tobacco using boys were more attractive, they were more intelligent, successful, got more friends in life etc. 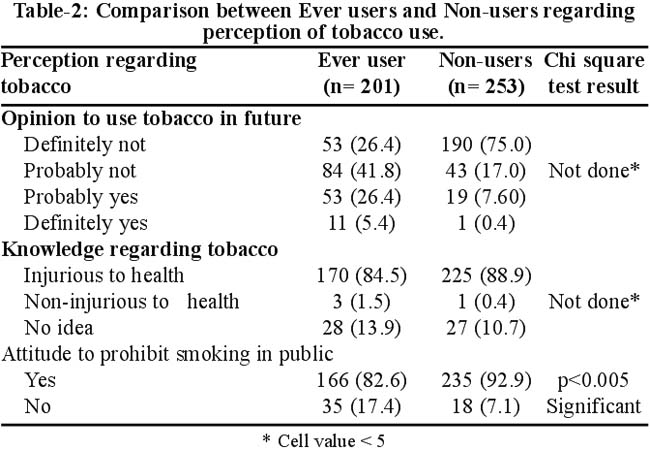 "Tobacco Traps Teenagers" is clearly evident from the present study as the prevalence of both ever user and current user of tobacco were quite high compared to similar type of study done in Goa (India)14 whereas higher prevalence than the present study were found in Bihar and North-Eastern states of India.11,15 Reasons may be due to different study area, only urban boys were interviewed in this study and all forms of tobacco were included. Other associated factors may be tobacco use by the family members, peer groups, even teachers were quite high.
Among the current user smokers were more than smokeless forms which may be attributed to present trend of smoking epidemic in the developing world. Similar findings were found in Mizoram (India) but this proportion was more than findings in Nagaland (29.6%) and Sikkim (23.6%) and other North-East states in India.15-17 But in Northern India young consumers frequently use smokeless tobacco.18
Another disheartening fact was that two thirds of current users used tobacco in both forms. This might be the tobacco exposure both within and outside the family like friends, teachers or their favorite actors smoking or chewing tobacco in TV serials, cinema etc.1
Other associated factors may be their access to tobacco in the market place-not being refused to purchase because of their age. Even though tobacco use by small children is thought to be not culturally acceptable in Indian Society, initiation of tobacco use by 10 years of age was more in smokeless form than smoking in the present study. But when the age was 14-15 years, nearly half of the ever users experimented smoking and one third smokeless form. These findings were different than found in other states of India.12 The findings reinforced the oscillating psychological states of adolescent age group. This is of concern, since younger the children start using tobacco; more likely are they to become addicted and die from tobacco related diseases. Consequently strategies to reduce initiation of tobacco use need to be targeted more towards this tender age group.
Present study showed current tobacco use significantly increased (p<0.001) with increased amount of pocket money received - similar to that found in Bihar.11 This emphasizes the need for parental/guardian\'s health education through antenatal/child health clinic to avert their children from health damaging practices.
Similar to the study done in Goa14 more current users had shown positive attitude towards tobacco use — seemed to be an effect of viewing tobacco use by sports, cinema personalities in the media or may be due to some misconceptions still prevent in the community (like tobacco helps to relieve toothache/morning motion). This also states that implementation of Tobacco Control Act, 2003 by Government of India not yet established in the study area.
Surprisingly equal proportion of ever user and non user had knowledge of harmful effects of tobacco - reasons of which could not be explained but peer pressure and family exposure may be responsible. Further research is to be carried out. These findings were quite different from other states of India.11,14
Non-users had shown significant (p<0.005) interest to prohibit smoking in public places - explores credibility of utilization of this huge young Indian for implementation of Tobacco Control Measures. Though three fourth of non-user and only one fourth had shown favorable opinion regarding tobacco use in future but school based awareness programmes followed by cessation initiatives utilizing peer pressure19,20 should be carried out so that they can resist pressure to tobacco use.
Leisure periods in class routine, school exhibition drama in relation to tobacco hazards involving students may be a promising strategy to prevent tobacco use among adolescents.

Due increased exposure to the world through several ways and increased modern amenities to influence teenagers, there is high prevalence, average perception and variable patterns of tobacco at Midnapore town where tobacco is trapping teenagers which needs proper intervention.

We are sincerely thanking the Indian Council of Medical Research (ICMR), New Delhi, India-110029 for their support to carry out this research studentship.