Successful pregnancy outcome after fertility-sparing surgery and chemotherapy for dysgerminoma

Ovarian dysgerminoma is a rare malignancy of the ovary. This is a case report of a 30-years-old female, presenting with a huge ovarian mass along with multiple gallstones; she was treated by fertility-sparing excision of the mass and cholecystectomy, followed by chemotherapy. She later had an uneventful pregnancy and delivered a healthy baby.

Ovarian dysgerminomas accounts for 2% of all ovarian malignancies and 28% of malignant germ cell tumours (GCT).1 Malignant GCTs occur primarily in girls and young women.2 They usually present as chronic abdominal pain and palpable abdominal lump with consequent distension. It may also present as an acute abdomen because of torsion of its pedicle.3 A treatment consisting of surgical resection and platinum-based chemotherapy usually cures the majority of malignant GCTs.4 Ovarian dysgerminoma successfully cured with fertility-sparing surgery and chemotherapy, is presented here with a review of literature.

A 30 years old female was admitted with the complaint of lower abdominal mass for 4 months, which was gradually increasing in size, with dragging pain. On examination, the abdomen was distended with a mass arising from the pelvis, about 22 x 20 cm in size; it was non-tender and mobile. Abdominal ultrasound showed large lower abdominal mass 20 x 15 x 10 cm, extending from the umbilicus to just above the urinary bladder; it was heterogeneous and echogenic, having one anechoic area 0.9 x 1.2 cm. Multiple gallstones were also found. Additional evaluation for serum CA125, AFP and bHCG was normal. FSH was 12 mIU/ml, LH was 8 mIU/ml, estradiol was 89 pg/ml, placental alkaline phosphatase (PLAP) was 261 g/L, and LDH was 1270 IU/ml. Full metastatic work-up was negative. Karyotype was 46 XX. After general anaesthesia, midline laparotomy incision was made. Bosseleted huge mass was found originating from left ovary and twisted around its pedicle (Figure-a); it was also attached to mesentery (Figure-b). 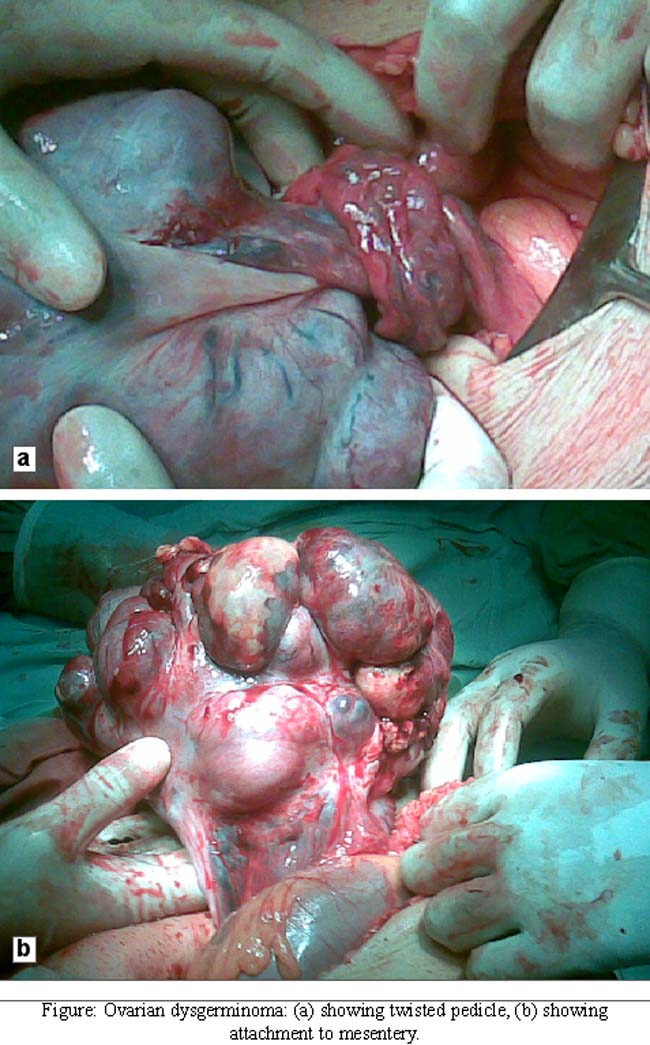 Mass was removed after haemostatic division of the attachments and pedicle. The right ovary, fallopian tube and uterus were normal. Cholecystectomy was done after securing and dividing the cystic artery and duct. No drain was placed. Linea alba was closed by mass closure with prolene no. 1 and the skin by subcuticular prolene 2/0 sutures. Postoperative course was uneventful. Histopathology revealed ovarian dysgerminoma having islands of large malignant cells separated by scanty fibrous stroma and infiltrated by lymphocytes, with areas of haemorrhages. The patient was then referred to oncology for further management. Adjuvant chemotherapy consisting of 4 cycles of Bleomycin, Etoposide, Cisplatin (BEP) was administered. CT scan of chest, abdomen and pelvis, and biochemical markers after 3 years remain normal. She became pregnant and delivered her second baby 6 months back; the pregnancy was without any complications and the child was healthy.

Dysgerminoma is the most common ovarian malignant germ cell tumour and can be found either in a pure or mixed form with other germinal elements.5 The following histological subtypes of GCTs are reported: dysgerminoma, yolk sac tumour, embryonal carcinoma, polyembryoma, choriocarcinoma, immature teratoma, and mixed GCTs.4,6,7 Hoei-Hansen suggested two distinct but overlapping pathways in ovarian GCT development; one involving spontaneous KIT mutation(s) leading to increased survival and proliferation of undifferentiated oogonia and the other related to presence of Y chromosome material and ensuing gonadal dysgenesis in phenotypic females.4 As the karyotype in this case was 46 XX, it probably results from KIT mutation.
Preoperative diagnosis depends mainly on age, abdominal symptoms, size and consistency of the tumour, and elevated tumour markers.7 Lee reported mean patient\'s age of 23.8 years (range 4-63 years).6 The presentation is usually with chronic abdominal pain and palpable abdominal tumour.7 It may also present as acute abdomen because of torsion (tumour twisting around its pedicle) or intra-abdominal haemorrhage (from congestion and rupture of superficial tumour vessels).3 Some may present with vaginal bleeding, amenorrhea or precocious puberty.7 This 30 year old lady presented with huge left ovarian dysgerminoma being twisted around its pedicle. Abdominal ultrasound showed the presence of large, multilobulated, heterogeneous, predominantly solid pelvic mass.3
Elevated tumour markers may assist in determining the diagnosis preoperatively.2 Hoei-Hansen et al reported the expression of following markers in ovarian dysgerminomas: placental alkaline phosphatase (PLAP) in 100% cases, stem cell-related markers OCT-3/4 and KIT in 80% cases, and NANOG and AP-2g in 50% cases.4 Kawai et al reported positive rate of AFP in 11.8% dysgerminoma, and CA125 in over 50% cases; they also found a high positive rate of LDH.8 In this case CA125, AFP and bHCG levels were normal, whereas PLAP and LDH were elevated.
Surgery is the first step of management followed by adjuvant chemotherapy (depending on histopathology).7 Appropriate surgical treatment for patients where fertility needs to be preserved consists of laparotomy with unilateral salpingo-oophorectomy and resection of all visible disease, as done in this case.5,9 The current standard adjuvant chemotherapy consists of 3 cycles of BEP.6,9 Four courses of BEP are recommended in case of bulky residual tumour after surgery.2,9 Dysgerminoma is also very sensitive to radiation while other germ cell tumours are not.7 Chemotherapy and/or radiation can be used to treat patients with metastatic disease.5
For patients with early stage disease, cure rates approach 100%, while for those with advanced-stage disease it is least 75%.9 Bilateral tumours occur in up to 10-15% of cases.4,5,7 Recurrence in contralateral ovary can develop over the next 2 years.5 Prognostic factors of GCTs include stage, amount of residual tumour, histologic type and raised tumour markers.9 The majority of malignant ovarian GCTs patients who undergo fertility-sparing surgery and chemotherapy retain their gonadal and reproductive function.9 Fertility sparing treatments are considered safe in patients with pure ovarian dysgerminomas.10 No recurrence occured in this case after 3 years of fertility sparing treatment, and she delivered a healthy baby without any complications, as also reported by Boran et al.10 To conclude, ovarian dysgerminoma should be part of the differential diagnosis in a young woman with large solid pelvic mass, which shows heterogenecity on ultrasound scan.